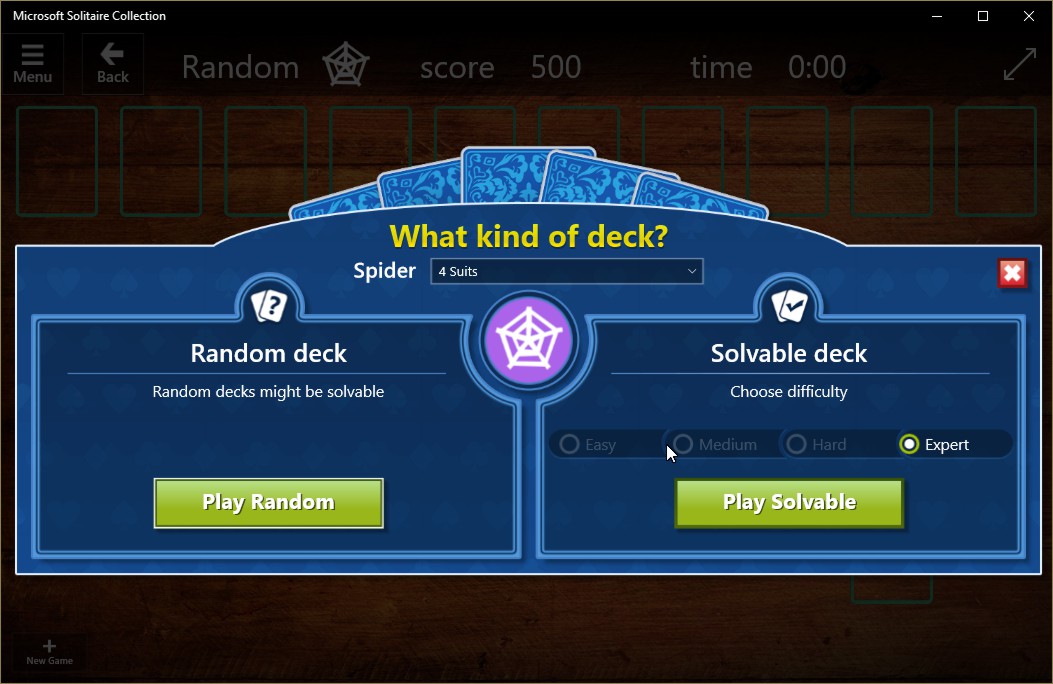 Solitaire – also known as Klondike and Patience – is a very popular game on computers. So popular, in fact that a version of this 200-year-old card game has been included by Microsoft in every version of Windows since 3.0 (1990), aside from a brief hiatus with Win 8 (which gap was filled in by third-party versions). Microsoft has even launched a version for iOS, playable on the Mac, iPhone and iPad.

And according to some reports, it is the most widely used program by Windows users by a long shot. More than Word, Outlook, and PowerPoint and Explorer. Writer Luke Plunkett called that statistic “frightening.”

But for millions of us, solitaire fills the time; it occupies our brains during long travel times, in waiting rooms, in between loading, downloading, burning to disk or compiling experiences. Not just the one game: there are a whole raft of solo card games under the name solitaire – freecell, spider, Klondike, pyramid and tri-peaks among them – that people play regularly. And sometimes obsessively. Many is the time I have stopped writing this blog or some other piece, trapped by writer’s block or simple exhaustion, to while away a few minutes recharging with a simple game of solitaire.

You mention Solitaire and—after the amazing end-game card haze—the first thing that pops into your head is that it was once seen as the single biggest threat to office productivity facing this planet’s workers. And in many regards, that’s correct.
Most people who have worked in an office can testify to the lure of the game, and could name one or two colleagues who spent a little too much time cutting the decks when they should have been filing reports. Some even take it too far; in 2006, New York Mayor Michael Bloomberg famously fired a city employee he caught playing the game while at work.
This addiction can even spread beyond the workplace and into people’s homes. My father has spent more time playing Freecell over the past decade than he has doing housework, for example. Things can get even worse for some: in 1996, Dr. Maressa Hecht Orzack opened the world’s first clinic for computer addicts as a response to her own chronic Solitaire addiction.

In May, 2008, Slate magazine ran a story titled, “Solitaire-y Confinement: Why we can’t stop playing a computerized card game.” In it, author Josh Levin wrote:

The game’s continued pre-eminence is a remarkable feat—it’s something akin to living in a universe in which Pong were the most-popular title for PlayStation 3. One reason solitaire endures is its predictability. The gameplay and aesthetic have remained remarkably stable; a visitor from the year 1990 could play the latest Windows version without a glitch, at least if he could figure out how to use the Start menu. It also remains one of the very few computer programs, game or nongame, that old people can predictably navigate. Brad Fregger, the developer of Solitaire Royale, the first commercial solitaire game for the Macintosh and the PC, told me that his 89-year-old mother still calls regularly to brag about her high scores. The game has also maintained a strong foothold in the modern-day cubicle.

So with its widespread popularity, a game beloved by millions and maybe even billions, you have to wonder why Microsoft seems bent on destroying the experience in Windows 10. Levin calls solitaire the “…cockroach of gaming, remarkably flexible and adaptable.” Perhaps Microsoft wants to stamp it out.

Win 10 gave us a new solitaire experience: five games bundled together. Microsoft boasts on its website:

Solitaire remains the most played computer game of all time, and for good reason. Simple rules and straightforward gameplay make it easy to pick up for everyone.
Solitaire has been part of Windows for more than 25 years, and the Microsoft Solitaire Collection makes it the best experience to date with five different card games in one…

The games come with a gaggle of useless “challenges” that offer meaningless awards and goals, thrown in like some afterthought some programmer had after playing World of Warcraft. They just clutter the screen – along with the ads between games that offer click bait and mindless gossip stories.

The new package i’s linked through the OS and your Microsoft account to keep track of what you play, how well you score and how often and when you play. Nothing like Big Brother looking over your shoulder to make for a relaxing experience.

But there’s more. If surveillance seems a small price to pay for our beloved game, there’s even more bad news.

First, Microsoft started putting an annoying message (above) at the end of every finished game in which the player didn’t win. It says “good game” in response to your failure. How does your computer know it was “good”? Does it measure your points, analyze your playing style, assess your reflex time? Weigh your score against some body of worldwide comparators?

Nope. It’s a saccharine, generic message, a pat on your little head from Microsoft. Like the awards given to kids’ sports teams for losing. Aww, you didn’t win,but here’s a trophy anyway. Winning isn’t everything: self esteem is. Pat, pat, pat.

Crap is what it is. Annoying, patronizing crap. Just for an experiment, try making random or bad moves. Lose deliberately. You get the same message: “Good game.” The solitaire experience was starting to taste like sour milk.

Who the f*ck cares about solitaire statistics? After a gazillion hours playing the game I KNOW what it means to restart a game. Leave me alone and let me disable warnings.

Nope, Big Brother won’t let you stop seeing this nag screen. It’s not an option: it’s the Nanny State invading our entertainment. But it keeps getting worse.

In the most recent update, Microsoft added “solvable” decks. And every time you start a new game you have to choose between random and a solvable deck. Even when the difficulty is set to “easy” – so easy your cat can’t lose by randomly tapping the mouse to move cards – you can ensure you beat it. Every game has the solvable option and THERE’S NO WAY to turn it off. Every time. It’s beyond annoying.

SOLVABLE decks in solitaire? Are millions of people so mindless, so lame, so self-obsessed with such fragile egos they need a guarantee they will win a game of solitaire? And what does THAT do for those vaunted statistics the nag screen warns you about upsetting? Would you have solvable chess games next? Mah Jong? Go? Probably.

Part of the pleasure in winning at a difficult game like spider is in doing it without help, without the deus ex machina of Microsoft’s helping hand. Solitaire, thanks to Microsoft’s meddling, has become invasive, annoying, patronizing and most of all, unenjoyable.

In pyramid, a pop-up keeps offering me a free deal or wildcard if I just watch an advertiser’s video. It keeps screaming, “Cheat! Please cheat! You really ought cheat!” Is that the sort of ethic Microsoft wants people to  pursue? Cheating in solitaire?

That sour milk flavour this update imparted starts to taste like you puked into your mouth. And that’s not how I want to enjoy my gaming experience. I have come to detest even the sight of the app in my start bar.

Indeed, the Microsoft solitaire experience has been on a rapid downhill slope ever since Win 10 was released. Perhaps that’s the goal: Microsoft wants to get us into greater productivity with other programs by making their solitaire games so annoying, so boring, so lame that no one over the age of six will want to play them.

Or perhaps Microsoft is just playing to the crowd that elected Donald Trump and most of Collingwood Council: create a gaming experience for the hard of thinking, for those too emotionally unstable to lose even a solitaire hand.

Whatever the reason, Microsoft killed solitaire for me. Not the game, just their expression of it. I’ve turned to third party versions of the games, and sometimes replace it with a Sudoku or Go game app. Maybe I’ll give up on Windows entirely and get a Mac. Well, maybe once they fix the abysmal iTunes and make it user-friendly. Or they get an iOS version of WoW. And maybe I’ll do more writing, too.