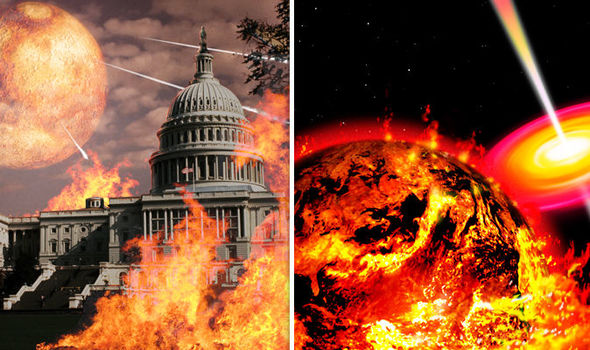 According to some, the rapture is coming again, April 23. I’m so tired of this event. I’m still cleaning up after the last rapture. And the one before that. And the one before that, and before that, and before that… it’s even more frequent than an annual event. But next week it’ll come again. the whole shebang: Christians rising from the dead, the messiah prancing about, angels flitting about like birds, the confetti, the glitter, champagne corks and party balloons all over the place. Raptures are always such a mess.

Seriously. April 23, according to a report on Faux News. Sure, Faux News has almost as much credibility as any supermarket tabloid, but they wouldn’t lie, would they? (insert gales of laughter soundtrack). But according to a piece on Patheos, that’s just what Faux predicts: the rapture.

And like all alt-facts, fake news and other codswallop Faux spews, the story got picked up by media and the many wingnut websites, and soon spread around the fields of the internet like the manure it is. Which of course sparks the inevitable cycle of debunking and ridicule (these hoaxes are called viral for a reason: they are an intellectual disease).

This is good for David Meade, because it fuels his book sales about the end of times and Planet X (although whether the ignorati actually read their purchase is anyone’s guess – and why write anything if the world’s going to end?). It’s truly a sad comment that anyone credible feels the need to debunk such feather-brained codswallop, but I’m sure they are alarmed at how many people are gullible enough to fall for it. It and the many other woo hoo ideas, hoaxes, conspiracies, cons and scams online.

The hoax is fanned by the self-described “Christian numerologist” David Meade (a pen name for one of the internet’s uber-wingnut conspiracy theorists). But this is an oxymoron: Christians are forbidden from practicing witchcraft, and numerology is one of the things witches practice. But that doesn’t stop Meade, who has predicted this event several times in the past (September, October and then November last year; each one failing to occur).

Well, sure, witchcraft and numerology are puerile superstition, but that doesn’t mean they can’t find a comfort zone among the fringe Christian eschatologists or hoaxers like Meade when it suits their purposes (and sells their books). Being a “Christian numerologist” is one of those made-up job descriptions like nail technologist or dog chiropractor. Who will dispute your title?

Saner Christians don’t like Meade or his wacky notions. On the Christian Times website, a piece titled, “It’s Time to End the Stupid about the End Times: Debunking Christian Numerology,” says,

Good luck with that. Stupid is enjoying its salad days online right now. Just look at how the flat earth stupidity has spread. Or homeopathy. Anti-vaccine bullshit. Creationism. Magic crystals. Vagina steaming. I could name hundreds of conspiracies, pseudosciences and wacky – and generally psychologically and physically unhealthy – notions that have grown roots online among the hard of thinking. Gullibility is at its peak these days, methinks. Even the Dark Ages were more enlightened.

Meade is a popularizer of the “Planet X/Nibiru/Nemesis” pseudoscience nonsense that no matter how many times gets debunked by actual scientists and sane people . As the Independent said, Meade “… made the prediction from a passage in the Old Testament… Meade’s prediction is also based on the book of Revelations passage 12:1–2.” That’s not a prediction: it’s just sa burst of attention-grabbing fiction.

For a certain branch of evangelical Christianity, Revelation 12:1–2 describes the beginning of what is known as the Rapture and the second coming of Christ.
The passage reads: “And a great sign appeared in heaven: a woman clothed with the sun, with the moon under her feet, and on her head a crown of 12 stars. She was pregnant and was crying out in birth pains and the agony of giving birth.”
In the passage, the woman is represented as Virgo.
According to Meade, the alignment represents “the Lion of the tribe of Judah,” marking the Rapture, the belief that Christ will bring the faithful into paradise prior to a period of tribulation on earth that precedes the end of time.

I know, I know. Stop laughing. A “certain branch” of conspiracy theorists using astrology and a wacky apocalyptic book written 1,900 years ago* to predict anything is humourous enough. But Virgo? Aside from the simple fact that zodiac signs are artificial constructions, the sun isn’t even in the area of the constellation Virgo until late September but because of the drift of time, the astrological sign called Virgo (150-180 degrees of the zodiac) is out of step with the sky and most of the stars from this actual constellation are in the astrological sign of Libra. Go figure: astrology isn’t science. But back to the rapture.**

The rapture isn’t in the bible. It’s actually a controversial interpretation of a contested translation that only a small group of Christians accepts (mostly evangelicals, who, given their support of Donald Trump, are gullible enough to believe anything). No matter what your faith, the rapture is something dreamt up by a fringe element.

Let me be clear: it won’t happen this time, either, no matter what wingnuts like David Meade say. Rest easy: the world won’t end next week. In fact, it won’t ever happen because, simply put: it’s all made up by a bunch of loony con artists and wacky conspiracy believers. You’re too smart to fall for them, right?

~~~~~
* The Book of Revelation was written by John of Patmos around 92-95 CE (not the same John as in the gospel of that name – which also wasn’t written by the disciple John, but that’s another story…) as a metaphor about the fall of Rome. It was only one of many similar apocalyptic works circulating around the early Christian times, and was not even part of the Christian canon in all churches until around 400 CE, and not officially ratified in the canon until 680 CE. Not everyone then agreed it should have been included. And it’s still not part of the Orthodox canon today. Some details about its origin are here. Why it was included and the others of its ilk weren’t is an academic debate beyond my ken. But I recommend you read authors like Bart Ehrman or Elaine Pagels to learn more if you are interested in its history and interpretation.

** Astrology – despite being utter codswallop – is, it seems, growing in popularity among people who think condom snorting, eating detergent pods and the flat earth are smart things to pursue. At least according to this story on Play Ground. I know: it’s incredibly disheartening to think that the generation that put a person on the moon is being replaced by one that believes in magic and woo hoo.