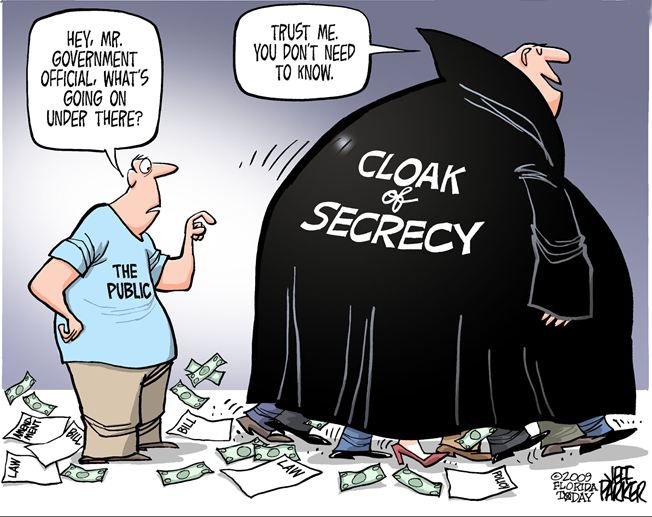 Once again our council scurried behind closed doors to discuss town business that should have been discussed in the open. But openness was never a watchword for this council. However, secretive and deceptive seem appropriate adjectives.

Two of the three items on Friday’s (June 11) “special” council meeting were about or related to the job-and-revenue-killing interim control bylaw (ICBL) that was passed in late April without even the pretense of consultation with the public, with water companies, with developers, or with the municipalities affected by the bylaw who get water from Collingwood:

First and foremost, both the mayor (a real estate lawyer) and the deputy mayor (a real estate agent) have their incomes and careers directly affected by this bylaw. The ICBL halts all new construction, thus increasing the value of existing real estate while diminishing available stock (thus creating higher costs and higher commissions). According to the Municipal Conflict of Interest Act, they both should have declared a conflict of interest every time the ICBL has been discussed, but neither has done so. Ethics is evidently not their strong suit where their self-interest is concerned.*

The dozens of comments and recommendations about councillors avoiding “apparent” conflicts of interest in their beloved SVJI apparently don’t apply to them, either. Hypocrisy reigns supreme at the top.

By not declaring a conflict, these two have fully discredited the inquiry report and its recommendations. Yet our SVJI-besotted council continues to lavish taxpayers’ money on promoting it (more than $10 million and still adding up, but hey, it’s not their money so what do they care how it gets wasted?).

Second, the ICBL and construction affect the entire town: it cost hundreds of jobs, it affected local suppliers, local paving and concrete companies, local landscaping companies, local plumbers and electricians, it affected home buyers and sellers, affected traffic, service demands… the ICBL affects pretty much the whole town. The ICBL itself was passed publicly, albeit without any notice to affected parties or public consultation. So why is council hiding from public scrutiny now to discuss it further?

Methinks the reason lies in our mayor’s undemocratic appointment as the MPP candidate for the riding.

Having abandoned his responsibilities as mayor (but not his paycheque, which he continues to take despite the utter lack of ethics in doing so), Saunderson or his campaign will likely soon be approaching local developers and construction firms for contributions towards his upcoming provincial election campaign. Many of these developers and companies were affected by the ill-timed, punitive ICBL. But some of them will be granted an exemption from the ICBL. Should a mayor vote on something that affects his chances of getting campaign contributions in the very near future? Should he even be in the discussion?

Can you spot the conflict of interest here? Can you see the potential for accusations of corruption and influence-peddling? I thought you might. Apparently, either Saunderson can’t, or he doesn’t care what you think or what the law says.

So scurrying in camera allows both the mayor and deputy mayor to discuss an issue that potentially affects their incomes, their careers, and Saunderson’s personal ambition, without having to reveal to the public if particular companies or developments were discussed, or if any exemptions were discussed. Sneaky, eh? I see no evidence either of them gives a damn about the people of this town or the responsibilities of their role.

As for the second item, the “Water Supply Agreements Update” (sic: the inappropriate capitalization is as per the agenda), this isn’t the approval of a legal contract, and no lawyers were present, so why is council hiding from public scrutiny to discuss an update? I mean, aside from their penchant for secrecy. Since this is a public utility, owned and paid for by taxpayers, we should have been allowed to hear the update and learn how negotiations on the expired water contracts are going.

But because this water “crisis” was made by council themselves, and could have been avoided years ago had they paid attention to the things that matter and done the job they were elected to do (instead of being obsessively focused on the SVJI), council now has egg all over its collective face for this debacle. No doubt they don’t want to have the public know any more about it because every update will likely further embarrass our elected representatives.

Finally, personnel matters are, of course, allowed to be discussed behind closed doors. However, the local rumour mill has it that council intends to lay the blame for their self-inflicted water “crisis” on the backs of senior staff instead of taking responsibility for the mess. It has been suggested council wants to make themselves look like the victims, not the instigators. But the public knows the truth.

Where a member, either on his or her own behalf or while acting for, by, with or through another, has any pecuniary interest, direct or indirect, in any matter and is present at a meeting of the council or local board at which the matter is the subject of consideration, the member,
(a) shall, prior to any consideration of the matter at the meeting, disclose the interest and the general nature thereof;
(b) shall not take part in the discussion of, or vote on any question in respect of the matter; and
(c) shall not attempt in any way whether before, during or after the meeting to influence the voting on any such question.

Plus, the entire point of the final report of the $10-million-plus Saunderson Vindictive Judicial Inquiry was that elected officials should avoid even the appearance of conflicts of interest, as the following SVJI recommendations (emphasis added) noted: