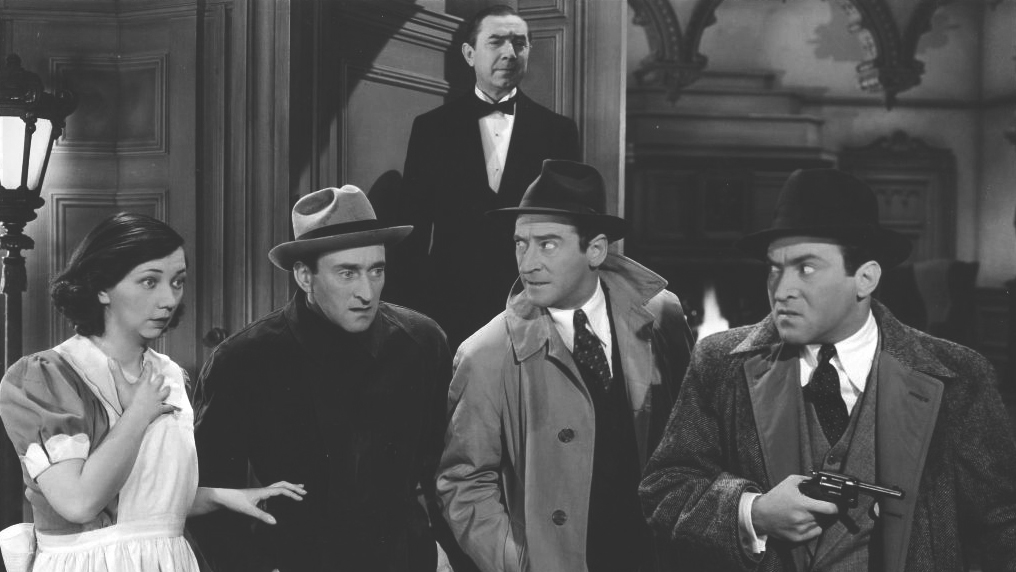 I put a DVD of the 1939 film, The Gorilla, into the player and sat back to watch. Bela Lugosi (above, centre) starred beside the Ritz Brothers (trio above), a popular American comedy trio contemporary with the Three Stooges, Abbott and Costello, and the Marx Brothers. This would be the last year the Ritz Brothers worked for Fox; they stopped making films entirely in 1943. It’s the first full film of theirs I’ve seen, but am not impressed.

Lugosi is best known for his starring role in the 1931 film, Dracula. After which he was typecast as the villain, mostly in horror and monster films. Some of which were great (or at least watchable for those who love the genres), many weren’t. Despite his attempts to get into other genres, most of his roles stayed in that narrow vein, mostly in B-films. His final “A” film was the 1948 Abbott and Costello Meet Frankenstein (which I would personally have rated a B-plus-film), but he continued making B- and C-films until 1955, the year before his death. In the mid-1930s, he played the protagonist in the entertaining fantasy, Chandu the Magician, and later its 12-part sequel, The Return of Chandu.

But sometime in the mid-1930s, Lugosi had become addicted to morphine and later methadone, administered for painful sciatica, and only checked into a clinic for help in 1955. By then it was too late: he died in ’56.

The Ritz Brothers, in this film, look like poor mimics of other comedy groups. And where each character in the Marx Brothers or Three Stooges was unique, with highly differentiated styles, dialogue, and acting, the Ritz Brothers seemed interchangeable clones: indistinguishable from one another. Their work here seems derivative and thin.

The Gorilla was shot in black and white, of course, although colour movies were already being made (Gone With the Wind and The Wizard of Oz being the two most famous). It co-starred Lionel Atwill, a polished English actor with a string of credits to his name; this, however, was not his best work. Nor was it Lugosi’s. Although I’ve enjoyed many of his films, in this one he felt wooden; going through the motions without any real effort.

Billed as a “horror-comedy,” I hoped it would be better — much better — than it was, something more along the Chandu lines. While not the worst B-film I’ve ever seen, it’s a long way from the best. And I’ve seen worse gorilla costumes in movies. Not often, however.

While I am a mere aficionado rather than a hardcore fan replete with knowledge about the industry, I have few misconceptions about B-films, their production standards, or their quality. I have a large collection of them on DVD and Blu-ray, some of which are actually very good. I have watched many, albeit not all of them.

Many of those considered B today were actually A films in their time or country; big-budget efforts back then. Several of the Godzilla films come to mind, as well as the 1930s’ monster films like Dracula. Many B-films would be best described as cheesy (mid-franchise Godzilla and a host of 1950s-60s scifi), or even mediocre. And there are others which are simply bad. But most are where the skills of filmmaking — acting, directing, special effects, writing, sound, music, lighting, etc. — are learned, practiced, and perfected. They are the cauldrons and anvils of filmmaking. Many are now considered classics (just look at the Criterion Collection and you’ll find several).

And, too, the term B-film is often a subjective appraisal, not a technical or financial term, based on personal taste. Sometimes people use it to describe a film or even a genre they simply don’t like. Others conflate camp and kitsch into their B-film definition.

B-films should not be easily dismissed: a lot of great actors, directors, and other talents got their start working in them. It’s often remarkable what can be achieved with a limited budget and technology. And many B-films have gone on to be A-films in expensive remakes or enhanced franchises (King Kong, Dracula, the Planet of the Apes series, and the Universal Godzilla films, for example).

Part of the joy of B-films is sometimes their lack of polish, but also it comes from the creativity with which they approached their financial and technical limitations. Some people today see the special effects and sets of older films as corny or cheap, but in their day they were often cutting edge. It’s unfair to judge a movie like the 1933 King Kong with its $672,000 budget against Peter Jackson’s 2005 spectacular with its $207 million budget, or the 1954 Godzilla movie with its $175,000 budget against the Godzilla films shot recently (2014: $160 million; 2019: $170 million. Even 2016’s Shin Godzilla had a $15 million budget).

There’s also an “innocence” in films made before the recent trend to show increasing violence in graphic detail. I am not a fan of explicit blood and gore in modern movies, and have no affection for slasher films or horror films that focus on it. For example, the 1963, B&W movie, The Haunting of Hill House has no blood, no violence, yet is as chilling a film as can be made (and much better than the cliched 1999 remake).

I personally classify the original 1930s’ Dracula, Frankenstein, and Wolfman (and almost all of the old Universal monster movies) as “A” movies because they appeal to my tastes, but my wife would see them as B or C (the sequels in particular). Ditto with many of the Godzilla films.

Wikipedia defines B movies rather simplistically as:

… a low-budget commercial motion picture that is not an arthouse film. In its original usage, during the Golden Age of Hollywood, the term more precisely identified films intended for distribution as the less-publicized bottom half of a double feature (akin to B-sides for recorded music). However, the U.S. production of movies intended as second features largely ceased by the end of the 1950s.

Encyclopedia Britannica gives us this definition:

But then it adds the caveat,

Major studios such as Metro-Goldwyn-Mayer, Inc. (MGM), and RKO Radio Pictures, Inc., had separate operations—called B-units—to produce their B-films. The “B” designation did not originally mean poor quality. Films later considered influential—including producer Val Lewton’s horror series at RKO (e.g., Cat People, 1942; I Walked with a Zombie, 1943) and film noir classics such as director Robert Siodmak’s Criss Cross (1949)—were made as B-films.

I began watching so-called B-films early in my life. As a child in the summers of the late 1950s and early 1960s, I sat between my parents in the front seat of our car at the drive-in near our cottage where we went on many evenings. There I saw a host of films, many of them low-budget scifi and monster movies. I still remember The Attack of the Crab Monsters (a Roger Corman favourite), The Mysterians, and several Hercules films with Steve Reeves.

At home, I saw them on Saturday morning on our small, B&W TV screen. I recall One Million BC with Victor Mature, Johnny Weissmuller as Tarzan, King Kong, Godzilla (1956 release), and many westerns. In my early-mid teens, after we moved, I saw them at the local movie theatre where I spent many a matinee afternoon (where they also showed many of the old serials in between films). And at the same time, I was reading the stories of Edgar Rice Burroughs, Andre Norton, and Doc Savage (the literary version of B-films).

My personal tastes in film and literature have, of course, changed over the decades, and I tend to be more critical of both. But I still view film as primarily entertainment rather than art, and am more forgiving of cheesy and campy films than of the same in books. Besides, watching some B-films helps me capture some part of my youth so I don’t forget the wonder and delight I had watching them so many years ago.