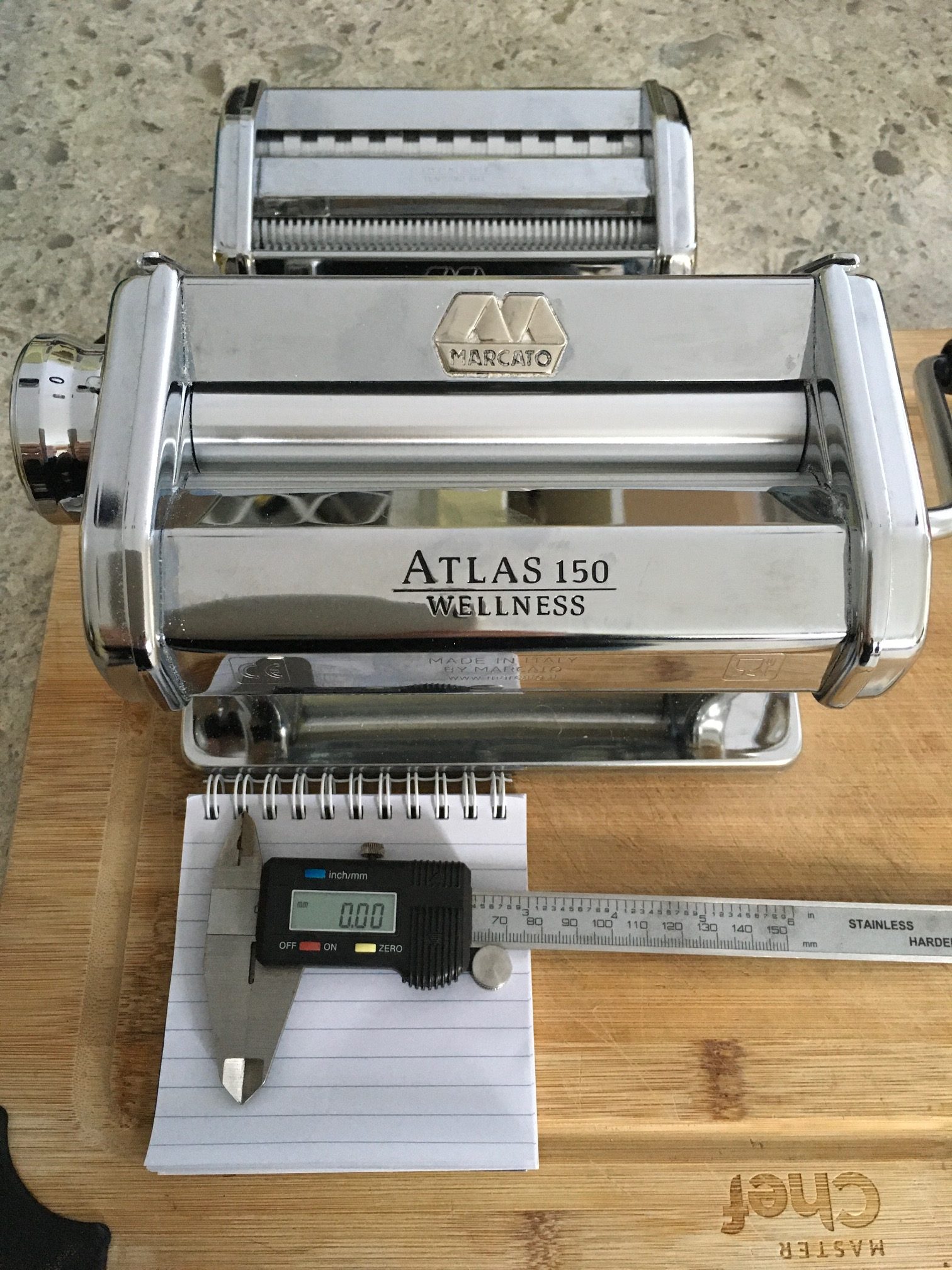 How thick should any particular type of pasta be? Seems like a simple question that could be answered by a basic chart or spreadsheet. But if it has been, I’ll be damned if I can find one online. In my numerous books on pasta, only a few actually give recommended thicknesses for making your own. Anything that deals with dried, store-bought pasta simply deals with the type of noodle and recommended cooking times, not its thickness.

I’ve scoured my many books and the internet looking for this information so I could build a simple chart that told me what roller setting I should use for different flat pastas. I cobbled together bits and pieces of information, along with my own measurements, to come up with the charts below.

Confounding this has been the discovery that there are no exacting standards for size definitions, nor for the widths of the roller gap on different machines or models. What one source calls “thin” another might call “extra-thin” or “medium-thin.” Some individuals have attempted to standardized references, but I can’t find anything to suggest either an international or industry standard, let alone one for consistent in-house measurements.

Sure, individual chefs, cooks, restaurants, and regions all have preferences of their own for what constitutes the best size and shape of any pasta, so there’s a large element of personal taste involved. For example, Marc Vetri, in his excellent book, Mastering Pasta (Ten Speed Press, Berkeley, USA, 2015), rolls out most flat pastas to 3mm, which would be considered “thick” or “very thick” by many others (I’m not sure if this is his starting point from which he makes it thinner, or it’s his go-to thickness). I can’t even roll pasta that thick on my machine!

In Making Artisan Pasta, author Aliza Green, says she prefers to roll her pasta at the “7” setting on her manual machine, which, depending on which chart you read, is between 0.85mm and 1.3mm, and would be considered thin to medium-thin (but this setting is about 0.23mm on my machine!).

Since I have a pasta maker that can roll at 10 different widths, I wanted to create a table of the recommended or optimal widths for the different types of pasta I make. But first I had to see if my own machine conformed to the few specifications I’ve found for the settings. I was surprised. 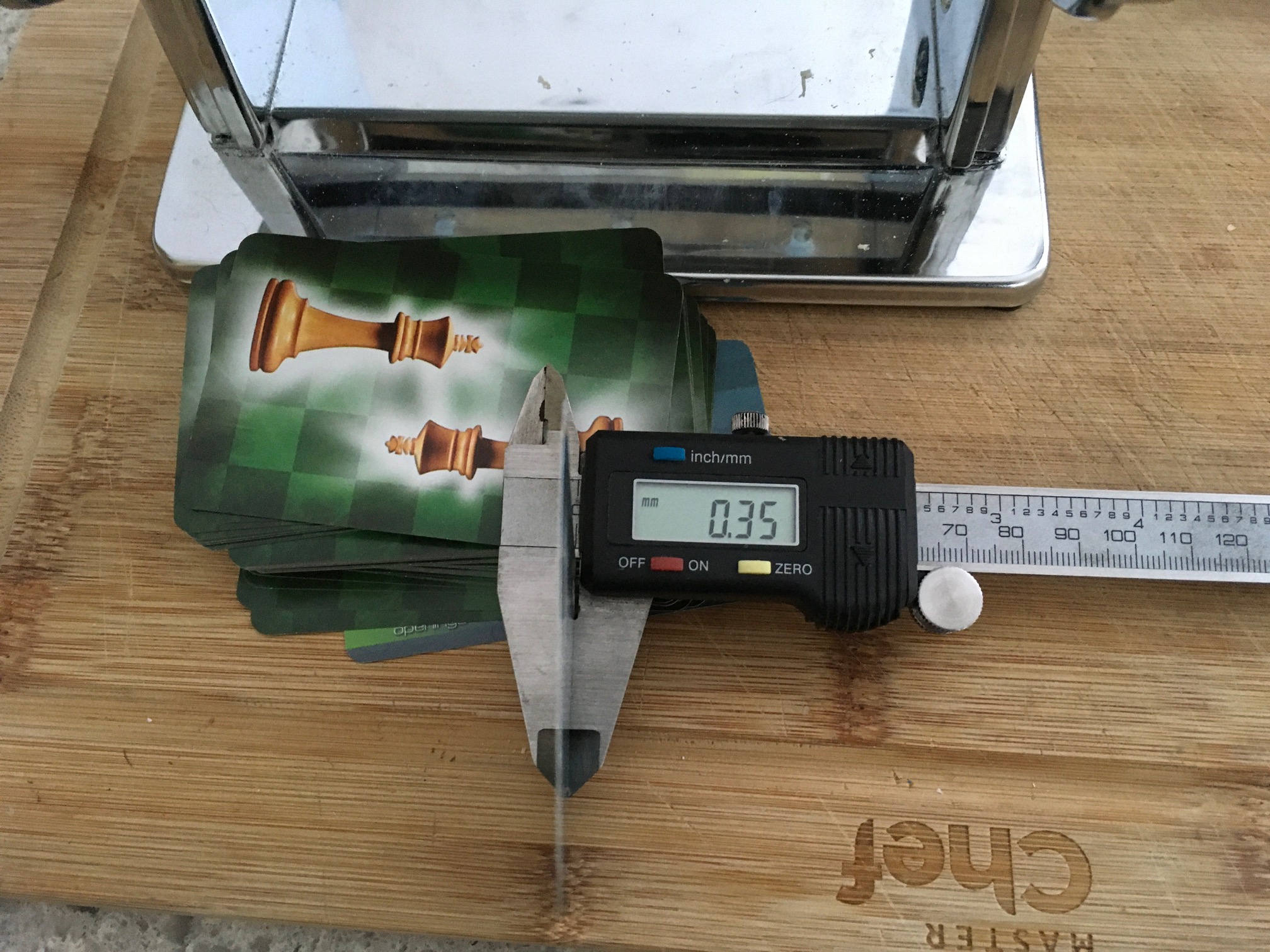 In my searches, I found some interesting posts on craft sites about measuring the width of the gap using playing cards (these pasta machines are also used by crafters for rolling their clay). I had an unopened deck of cards (showing chess openings) I used, but cannot speak to whether these are standard width. I did find I could not push even a single car through the two narrowest settings, so perhaps my cards are a bit thicker than standard. A single card was about 0.34-0.35mm.

And, of course, I had to borrow a digital micrometer to measure everything. I haven’t used one before, and found it a bit finicky. I reset the calipers to zero before each measurement. I don’t know the level of accuracy of this device but found it often showed small differences in the under 0.5mm widths. Whether that was from the device or my handling and inexperience, I cannot say.

I took out my own Atlas Wellness 150 and measured the widths between the rollers. The results and what I’ve learned are in the charts below. You might be surprised by the results I came up with for roller thicknesses (hint: they are much lower than the charts I found online):

I measured the widths five times: the first three measure how many sheets of my notepad I can push through the rollers. Measurement four is how many sheets I can roll through, turning the handle as I do it. It is, you can see, a bit thicker because the sheets compress more when rolling. The card columns show the number of playing cards I could push through the gap and their collective width. Keep in mind that pushing three or fewer sheets is a bit clumsy, but cards push through more easily because they are stiff. 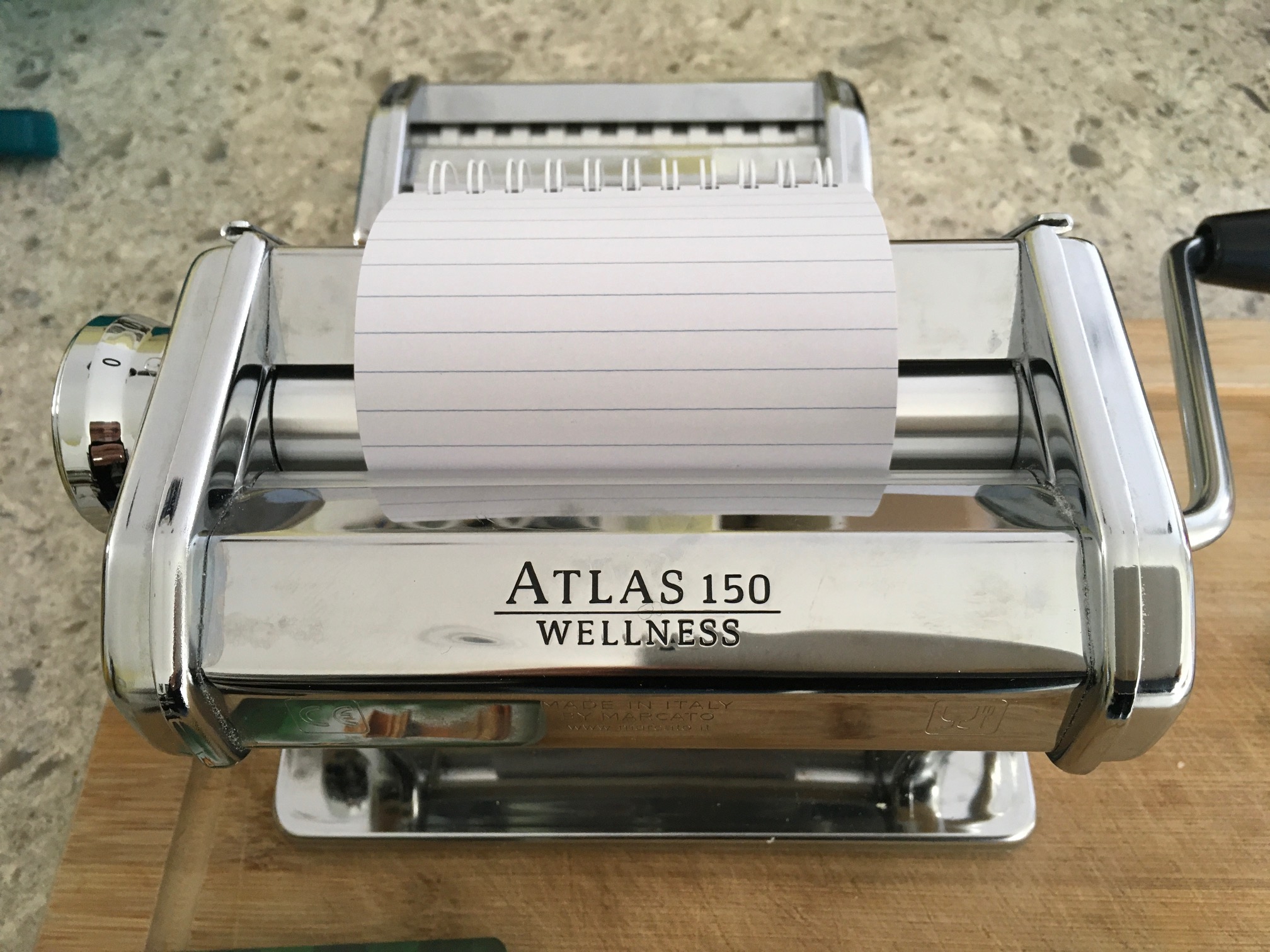 However, despite my clumsy handling of the micrometer (since paper bends easily, the widths shown may be the result of the paper not being properly aligned between the calipers), and my clearly unscientific method, the results are reasonably consistent. Compare these to other width settings I’ve found online (along with a  column showing which types of pasta should be made at those thicknesses):

The setting for “0” in the first column (from Marcato’s own tech sheet) is twice what my own measurements show for that dial setting. And every other setting on my machine is lower than those shown here. I always suspected I was rolling out my fettuccine too thinly at A dial setting of six or seven, and now I have evidence I was right. According to the above chart, I should be using setting three or four!

I have not been able to measure the actual dough thickness, but given the softness of the dough’s surface, this would be rather inaccurate using a manual micrometer. I thought of going to a woodworker and asking to have some small samples of wood milled to exact heights to attempt to push them through the rollers. I’m not even sure if wood can be milled to these small and exact tolerances.

The gap seems to be adjusted by an offset cam or gearing within the housing. Because I haven’t found a diagram or video explaining how it works, I have not yet explored options for resetting or changing how the widths on my pasta machine are set. I am not sure if it’s even possible to change the gap. However, given the discrepancy between what I measured and the widths from Marcato documentation, I might want to try it. Since I can’t find a manual online to guide me, I’ve emailed Marcato to ask for help. 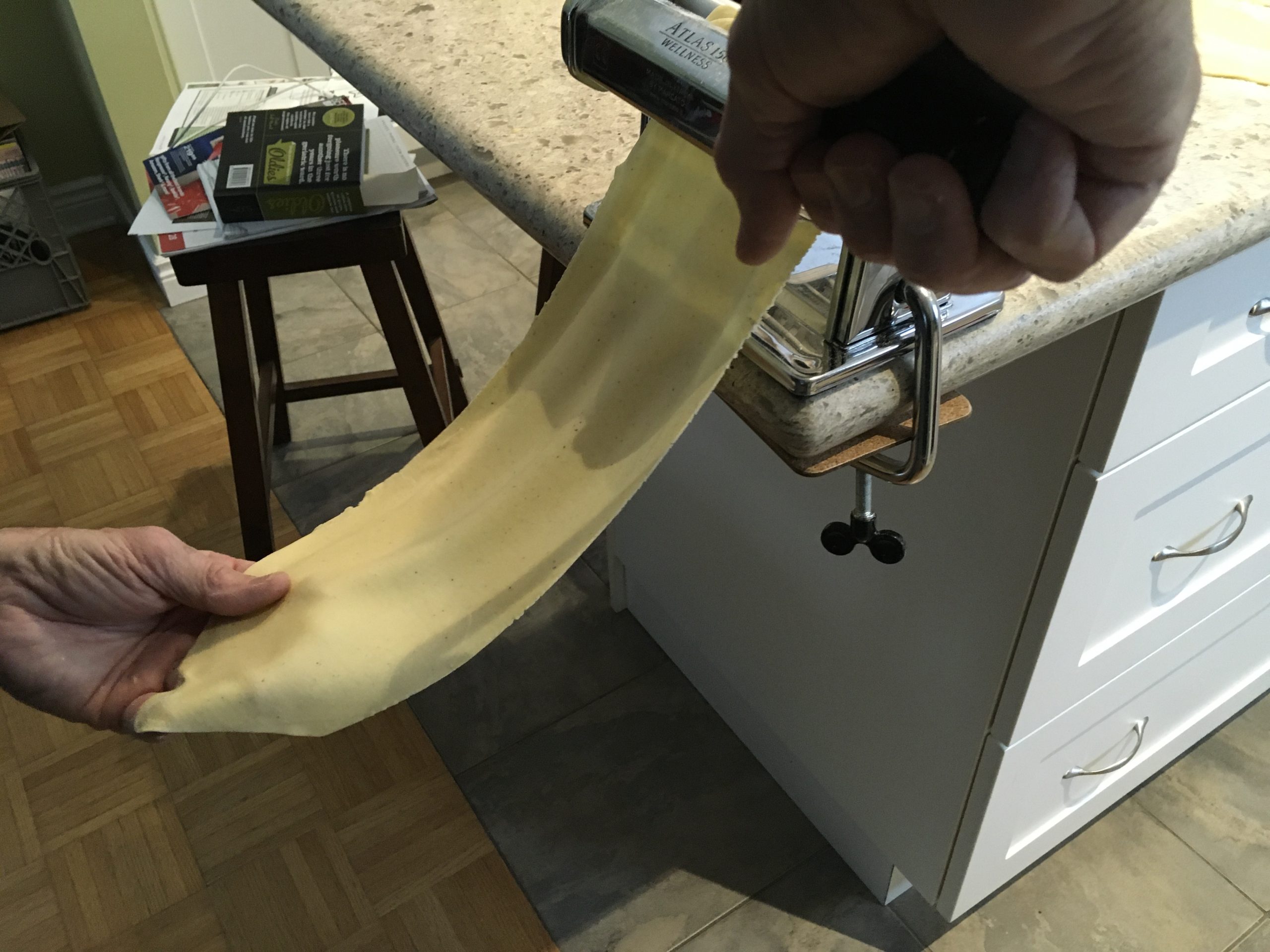 Meanwhile, I’ll continue to make my pasta, but will experiment with adjustments to the width setting to see how they affect the dough and the cooking time. I may also have to compensate for the fewer-but-thicker noodles made if I increase the width. I’m also unsure as to how well the cutter attachments will handle a thicker dough. But experimentation is part of the fun of cooking. I’ll let my readers know the results when I make my next batch (and if I take the machine apart!).

And sometime in the near future, I may buy a motorized attachment to experiment with, to see if it makes pasta making any easier or faster, as some reviews claim. Or not… I am always tempted to spend my diminished income on cutting attachments and more books. Maybe I’ll win a lottery.

These videos below show that the machine can be taken apart and re-assembled (finicky but do-able, although my mechanical skills may be challenged by it), but I’ve found nothing yet on adjusting the geared end of the roller head to change the widths: 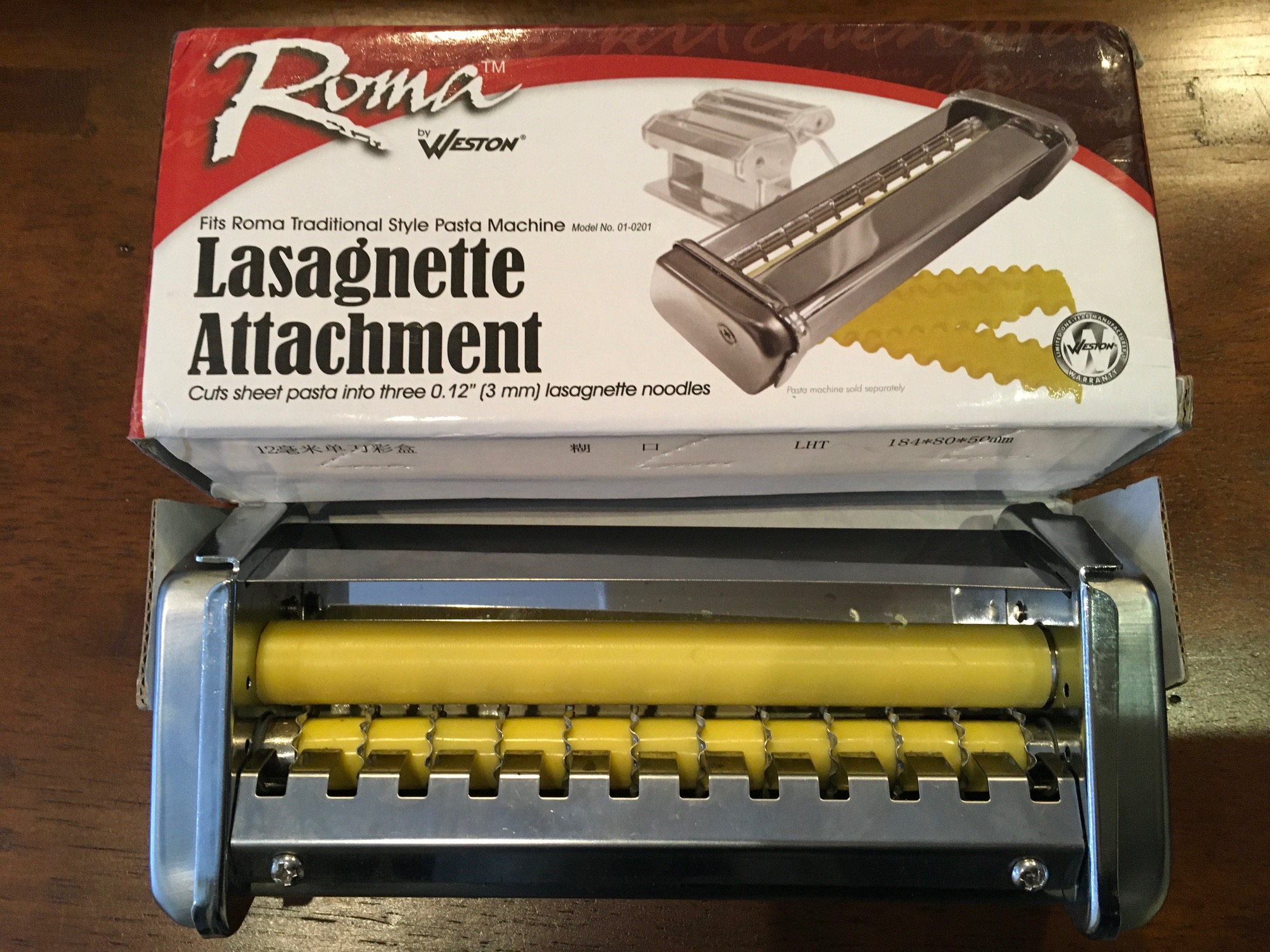 PS. Caveat emptor. In the past, I’ve always bought Marcato’s own attachments for my Atlas pasta machine. But I was searching for a lasagnette cutter recently and was having a hard time finding one in stock anywhere in Canada. Instead, I found an inexpensive one from another manufacturer on Amazon. Of course, I was tempted. Marcato’s cutter attachments usually sell for $60-$85 (and more: the ravioli maker is about $130). The Roma attachment was selling for $22. How bad can it be, I asked myself. Bad. Very bad. The box had been opened and the cutter handled before I got it: it was dirty with fingerprints. The attachment’s flanges were a fraction of a millimeter too wide to fit comfortably in the Atlas’s holder, so the thing sat up too high and was unsteady. The cutter roller moved roughly and sometimes didn’t turn with the crank. I could see the blades scoring the plastic of the second wheel, suggesting small bits of plastic might be fed into the pasta. The covers felt flimsy and likely to bend or break.  Overall, a piece of garbage. It got returned. I learned my lesson: no more off-brands for my Atlas!