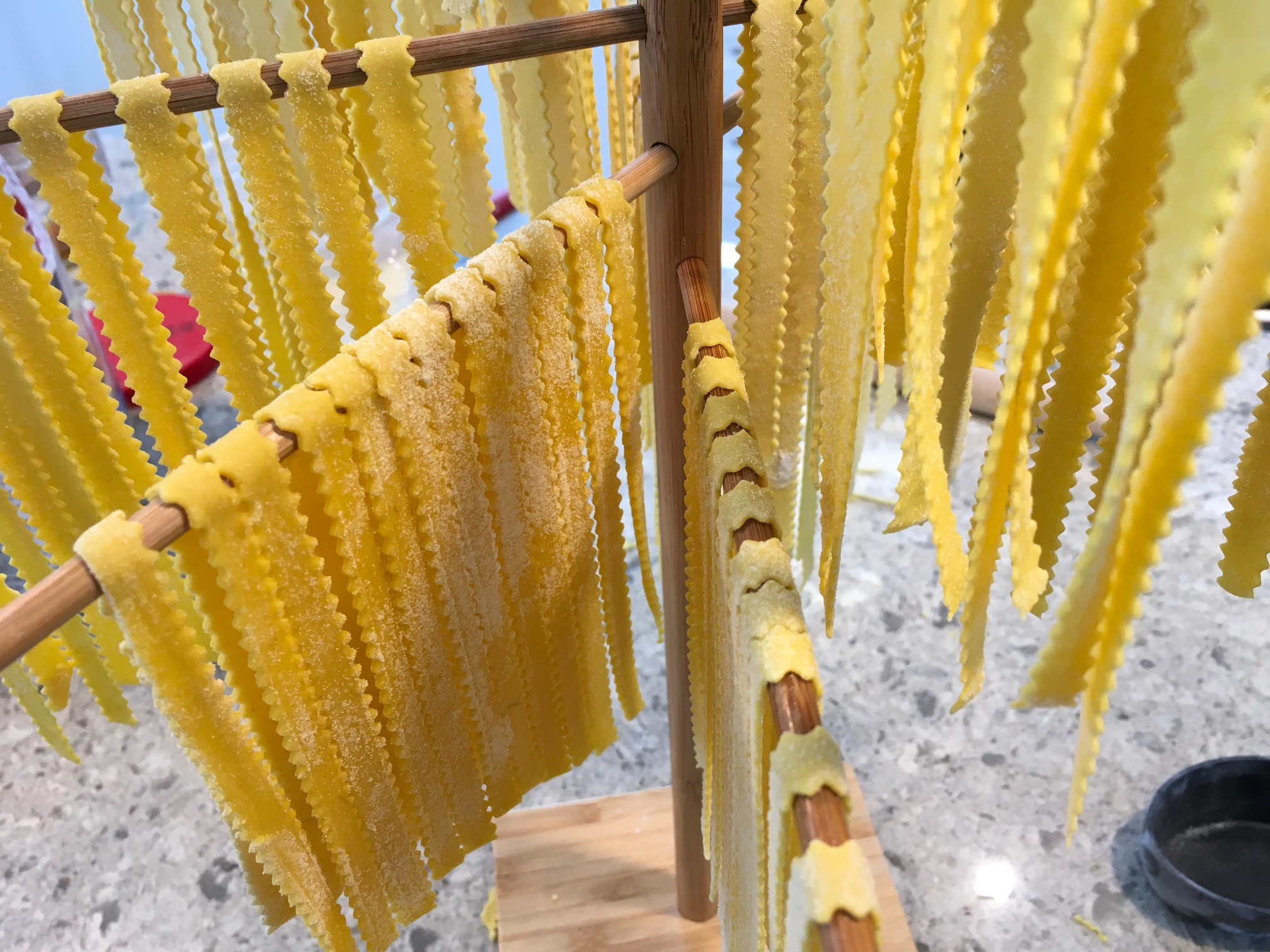 I was back at making pasta this week, trying a slightly different recipe, and working on honing my skills with the pasta machine. As well, I  was hoping to get my recently-acquired mafaldine cutter attachment operating correctly (you might recall reading about the problems I had with it clogging in the previous post on pasta making).

My usual mix for pasta dough is a ratio of about two-to-one tipo 00 flour to semolina. Thinking about that, I wondered if the gluten in the lower-protein tipo 00 flour was not working very well with the different, tougher, and less elastic gluten in the higher-protein semolina. I wanted the semolina for its texture and strength, but I’ve also found my dough sometimes resists rolling, and can break instead of laminating smoothly. Perhaps the mix was not appropriate and had too much semolina. But I thought to try the change of flour first.

I’ve also found that, because I roll a thin pasta noodle, the drying noodles frequently break at the limb of the drying rack. I wondered if the two different glutens were not bonding sufficiently to hold the noodle together (this might also be the result of the weight of the noodle pulling the dough too thinly across the limb; perhaps a shorter noodle might suffice?).

I decided to use unbleached all-purpose (AP) flour this time instead of tipo 00. Many of the recipes I’ve found online and in my pasta books recommend it, sometimes exclusively. I used it in my very first efforts at homemade pasta, but switched to tipo 00 shortly after, when I discovered a local source (I use unbleached AP flour for my bread, too). This time, I hoped the higher protein in the AP flour would provide more and stronger gluten to help the noodles stay intact. 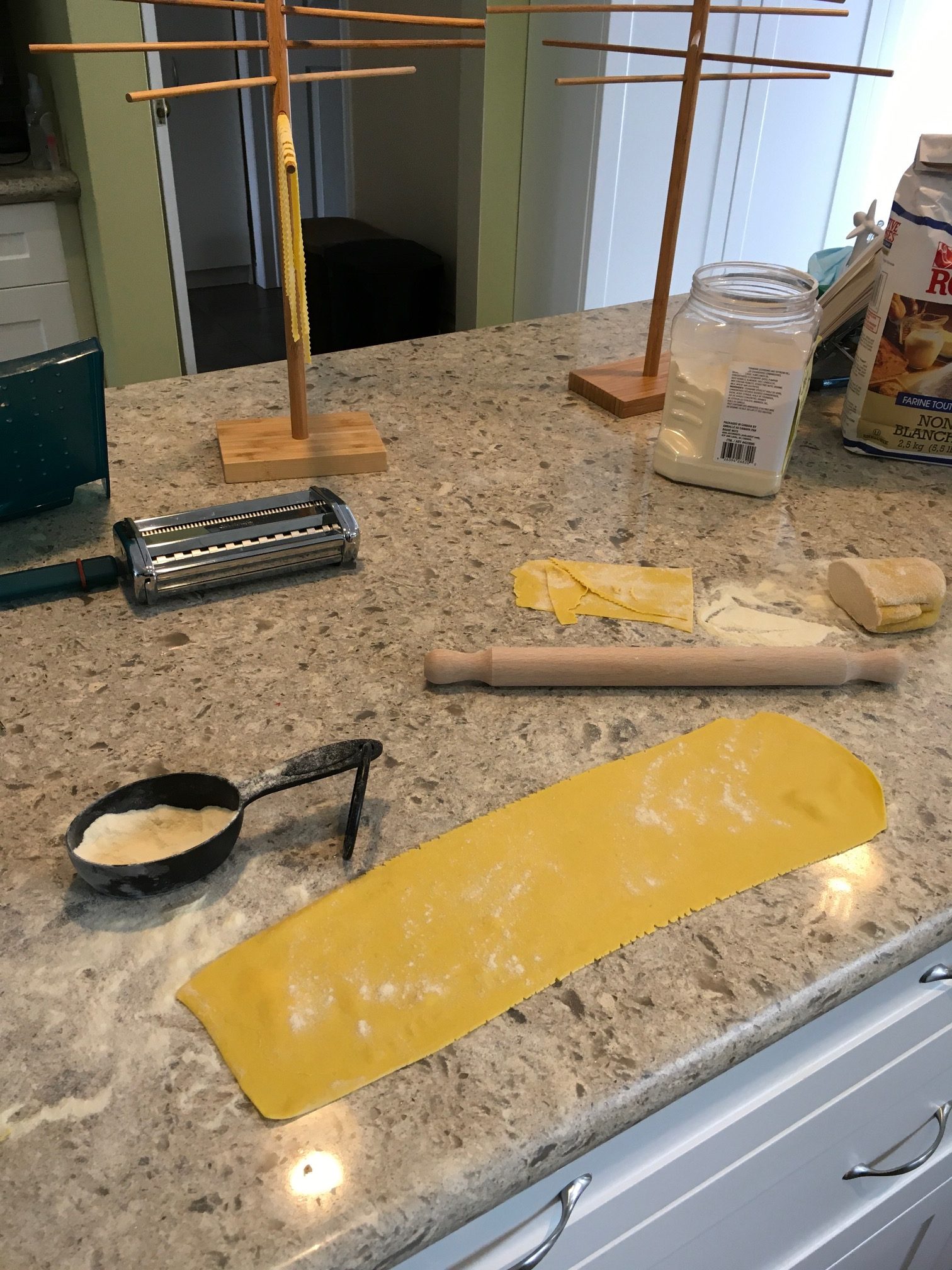 I used 100g AP and 50g semolina, plus two eggs, a pinch of salt, and a small amount of olive oil (less than 1 tsp) to make my dough. I added a bit of water as I mixed it to get the right consistency. Normally I would use one whole egg and one yolk for this amount of flour, but chose to use both whole eggs this time. I also threw in a pinch of turmeric for colour. I tried to make a slightly drier dough than previously, by cutting back the additional water.

I followed the usual process of kneading the dough for about 15 minutes, then covering it and letting it rest for an hour while it developed its gluten chains. I’ve also wondered if the resting time is sufficient for the tipo 00 flour.  Some recipes suggest a two-hour rest. However, I suspect that might make the semolina gluten too rigid for rolling and laminating. I have found that towards the end of the rolling and cutting process, the dough is often less pliant than when I start. 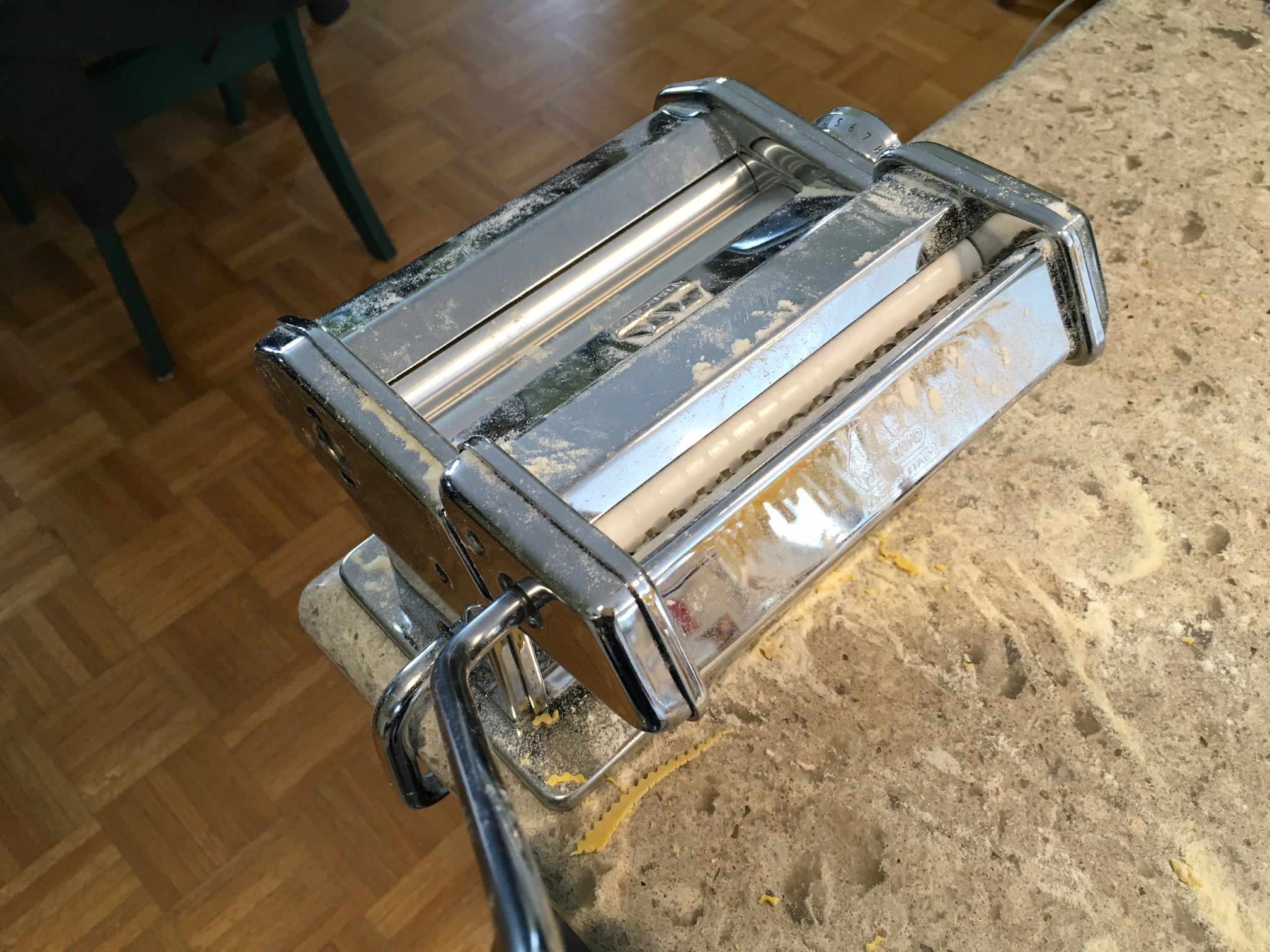 When the resting time was up, I started the rolling, laminating, and cutting with my Atlas Wellness 150 pasta machine. Again, as usual, I rolled the dough through several roller widths, laminating it several times at each setting, until I reached setting six. I then cut the sheet into a section about 25cms long. I dusted the rolled dough with semolina flour, then was more liberal in my dusting of the attachment’s rollers. I inserted a straight edge into the mafaldine attachment and turned the crank.

It worked. The dough came through, cut as expected, although at least three of the cutting wheels do not cut all the way through the dough. They score it, however, and it was not difficult to pull the noodles apart to hang them up to dry.

While rolling the dough for one sheet, I noticed the thickness setting dial slipped back from six to five. I suppose I hadn’t made sure it was set properly. But instead of re-rolling it at six, I decided to try a small group of noodles at the slightly thicker setting. I wanted to see how they went through the cutter and how they cooked later. 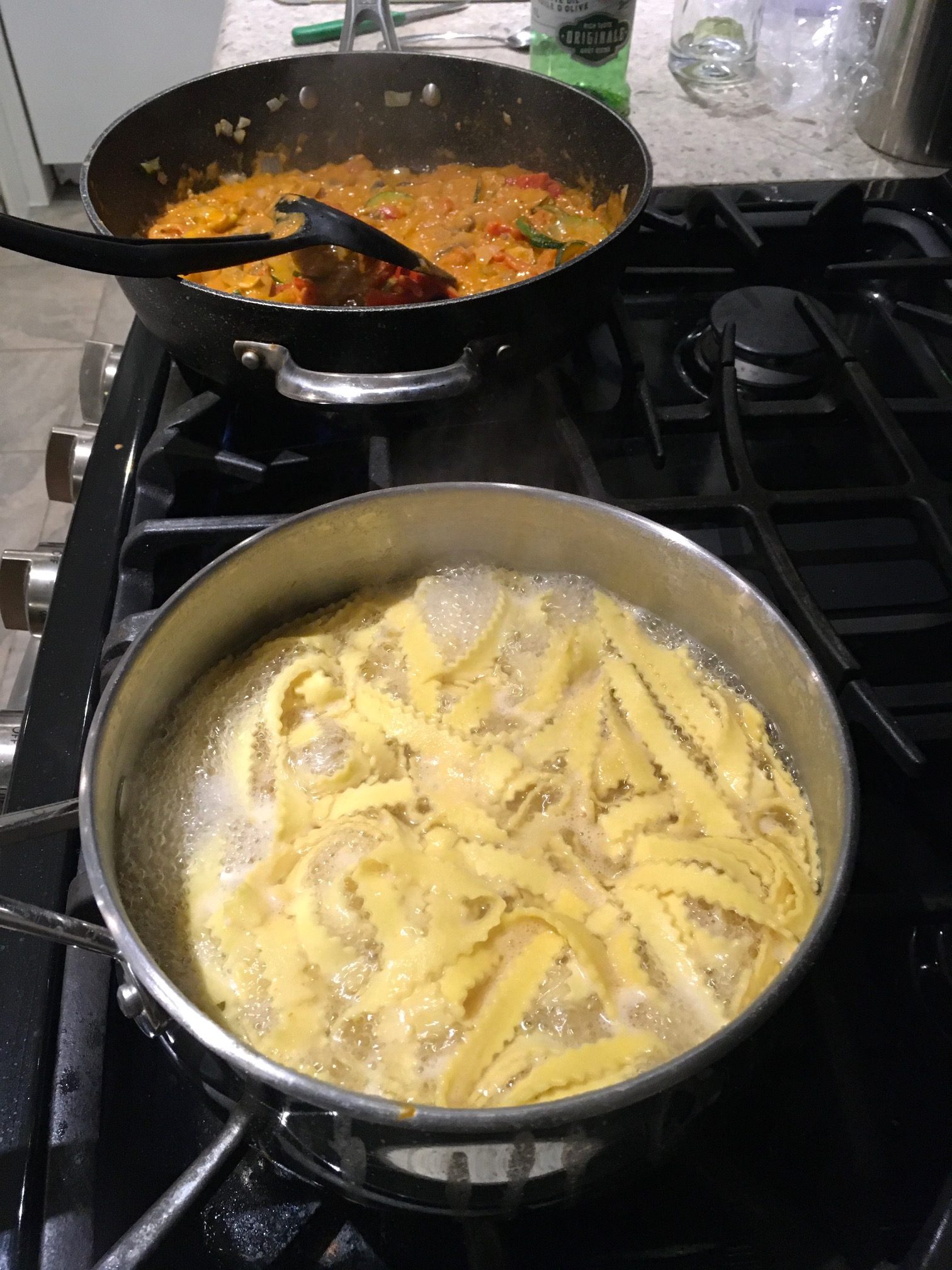 The mafaldine cutter didn’t clog or jam once, I am happy to say, even at the thicker noodles. The final noodles are a little wider than those the fettuccine cutter makes, and have the wavy edge of the wider lasagne ricce cutter (good for holding onto the sauce). Just what I wanted. I left the noodles to dry for four or five hours.

For the meal, I cooked some zucchini, onion, red pepper, mushroom, and garlic in a frying pan with olive oil, then added a rosé sauce, and let it simmer. 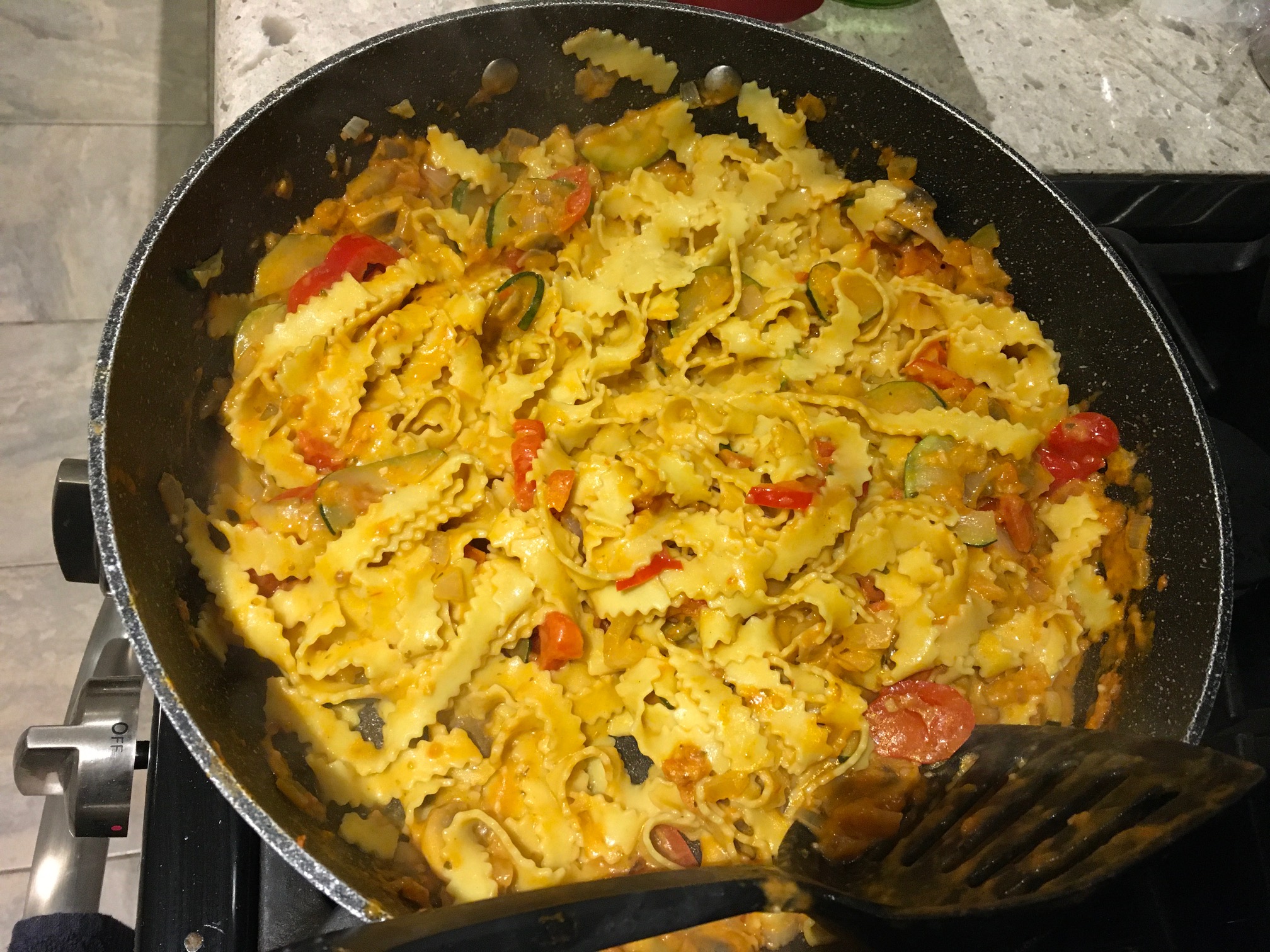 Once the noodles were done, I drained them, holding back about a half-cup of pasta water. I poured this back into the pot (heat lowered to medium) and added a slice (about 1cm) of butter stick. When it had melted, I tossed the noodles back into that pot and stirred them so the butter was spread evenly on them.

Then I put the noodles into the sauce and let them simmer together for another five minutes. I served them with nocellara olives and hot pepper pickles (for me) and marinated artichoke hearts for Susan. I topped the pasta with some grated parmesan reggiano cheese. Delicious! The turmeric gave the dish a lovely yellow colour, too.

I didn’t notice a significant difference in the texture of the noodles between the AP and tipo 00 flours. However, next time, I will experiment with all-AP flour instead of a mix and see if that makes a difference to both the process and the eating. I’ll write about that when I get to it, maybe next week.