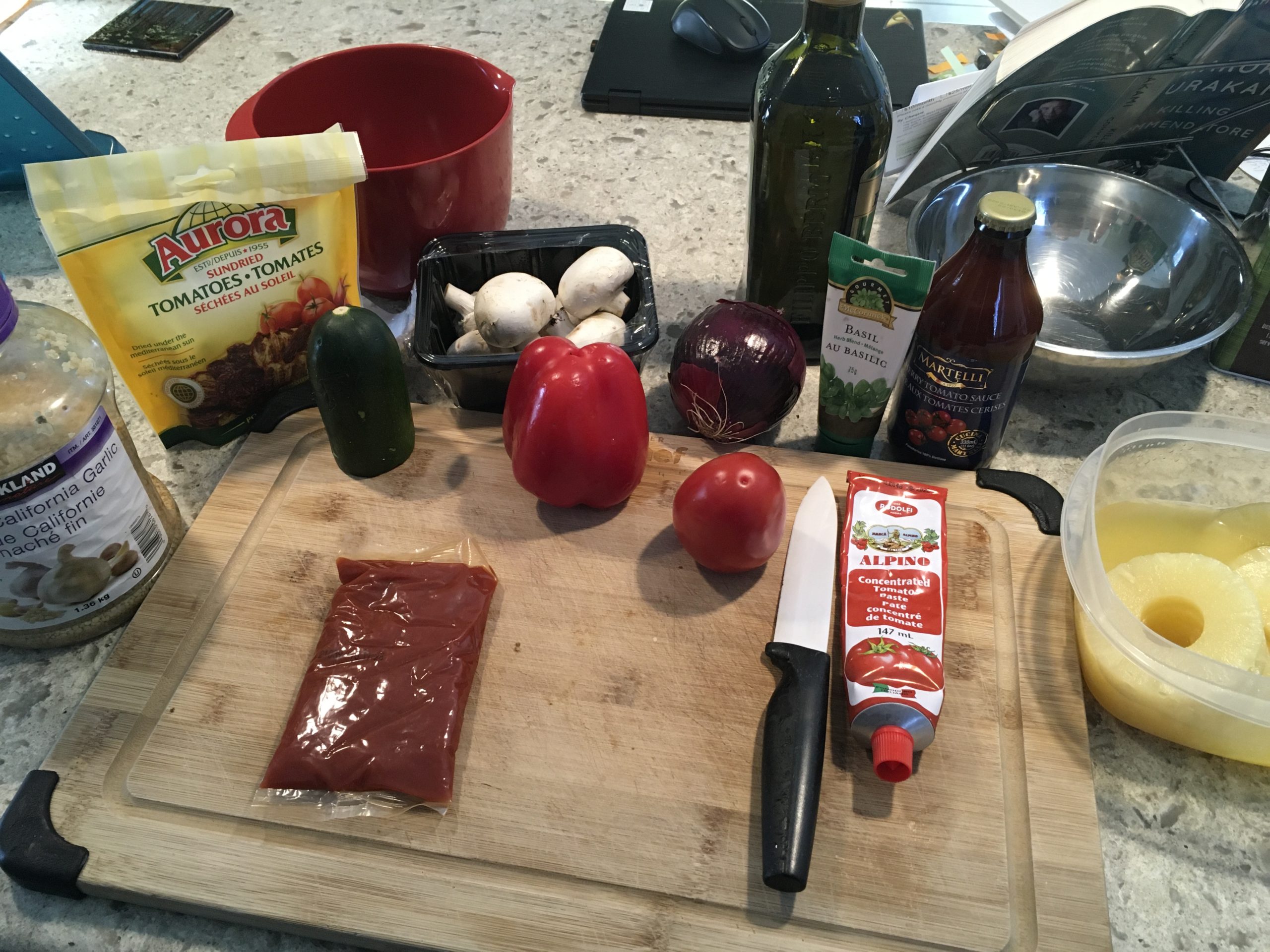 Pizza was one of those things I thought about when my hot flashes from my ongoing hormone treatment awoke me in the middle of the night this past week. Several times, in fact. As I tossed and turned I thought about my pizza-making process as I recently described here and wondered. I had received some comments about it, too, which prompted my continued meditations on pizza.

I’ve been making pizza that way for years with only minor changes or alterations in the steps, but I first asked myself, “Can I simplify it?” Then came other questions: Can I change the rack height in the oven? Alter the steps? Alter the order of ingredients?  Reduce the number of warnings? I rose the next day determined to experiment. 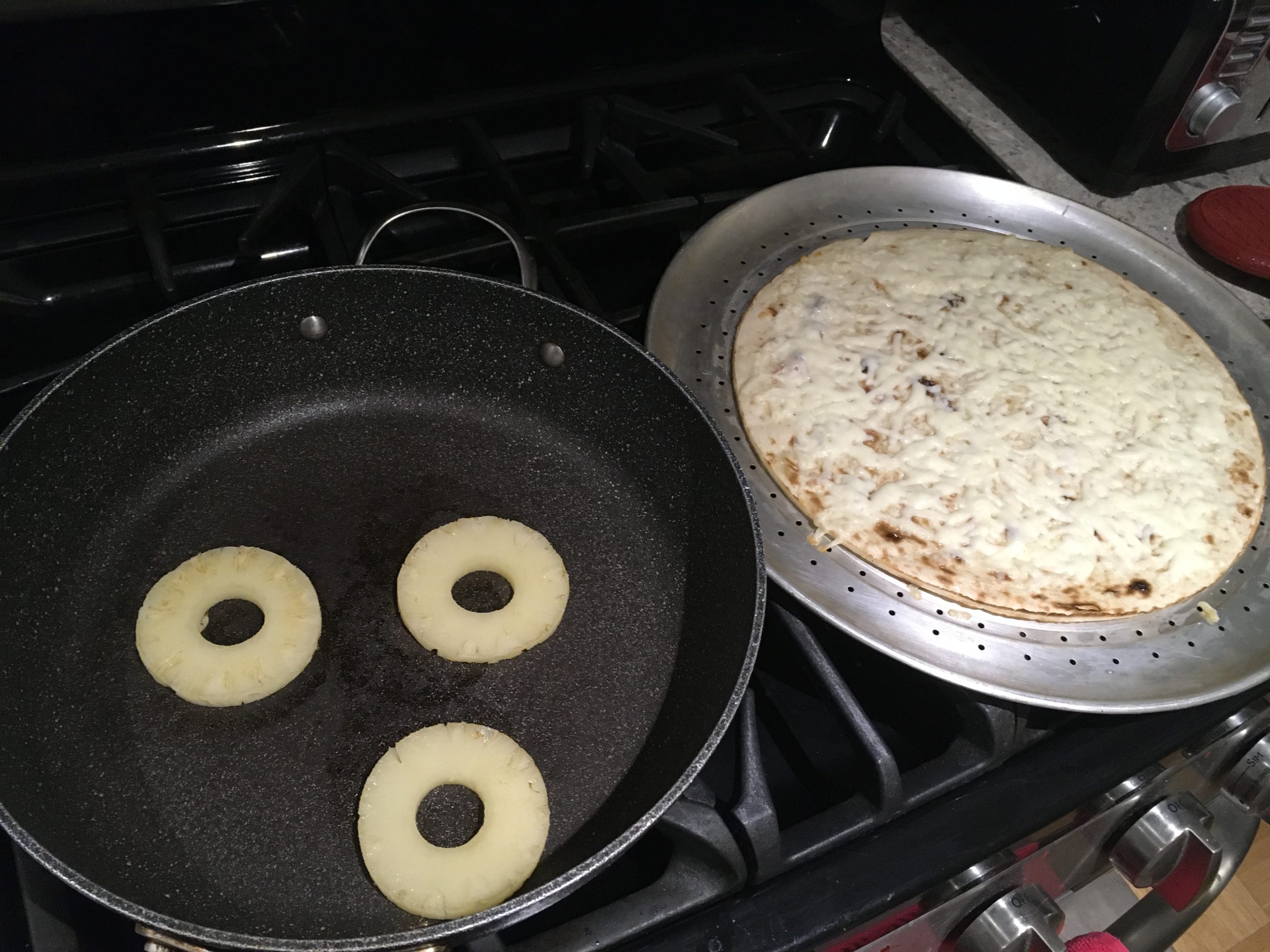 Although we seldom eat pizza twice in a short time like this, I convinced Susan it was appropriate so I could try some changes, just to see what resulted when I strayed from my old format.

I still had the second pizza shell from the package, and all the other necessary ingredients (onion, mushrooms, peppers, and a bit of zucchini), so I didn’t need to buy anything aside from a fresh Roma tomato. I also had a lot of pineapple rings left from the tin that I wanted to find a use for. And pizza is the best place for it.

Spoiler alert: it worked, but wasn’t as good as before. But bear with me. My first steps were the same as before: mise en place, warm the oven, make the sauce (I added some finely-chopped sundried tomatoes to it, and a little more garlic, but the rest was the same), chop the vegetables, and slice the mozzarella cheese. 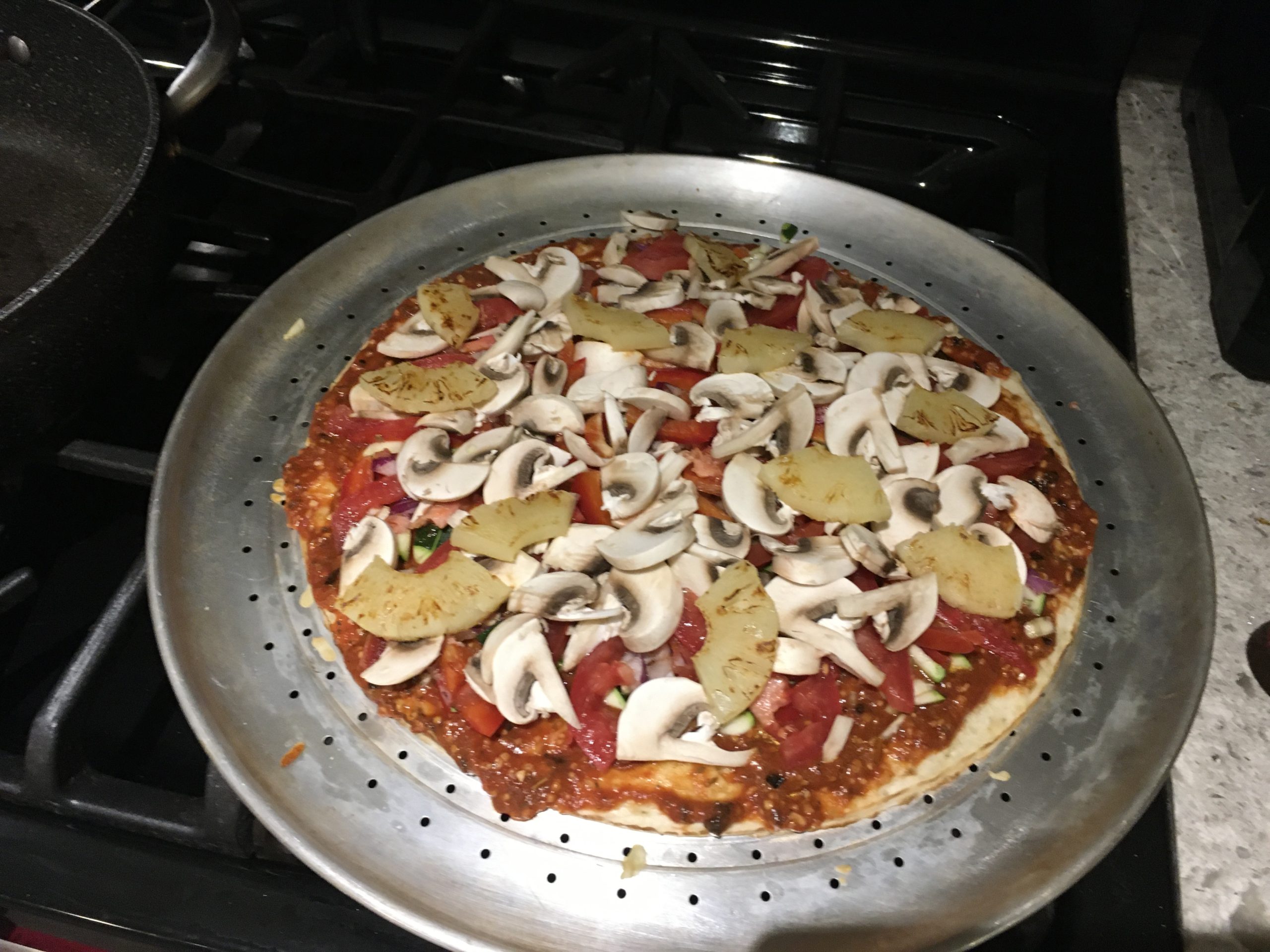 Oh, yes: I also moved the rack to the middle of the oven from the topmost slot. I’ve always found this heated (cooked) the bottom of the crust a bit too quickly, but I hoped with fewer steps, it wouldn’t over-cook.

I oiled the pizza shell, but didn’t warm it (one step lost). Instead, I topped it with grated cheese and warmed the topped shell long enough to melt the cheese while I grilled three rings of pineapple (to dehydrate them and caramelize the sugar a bit). When the pineapple was semi-cooked, I removed the rings from the pan, and cut them into quarters. 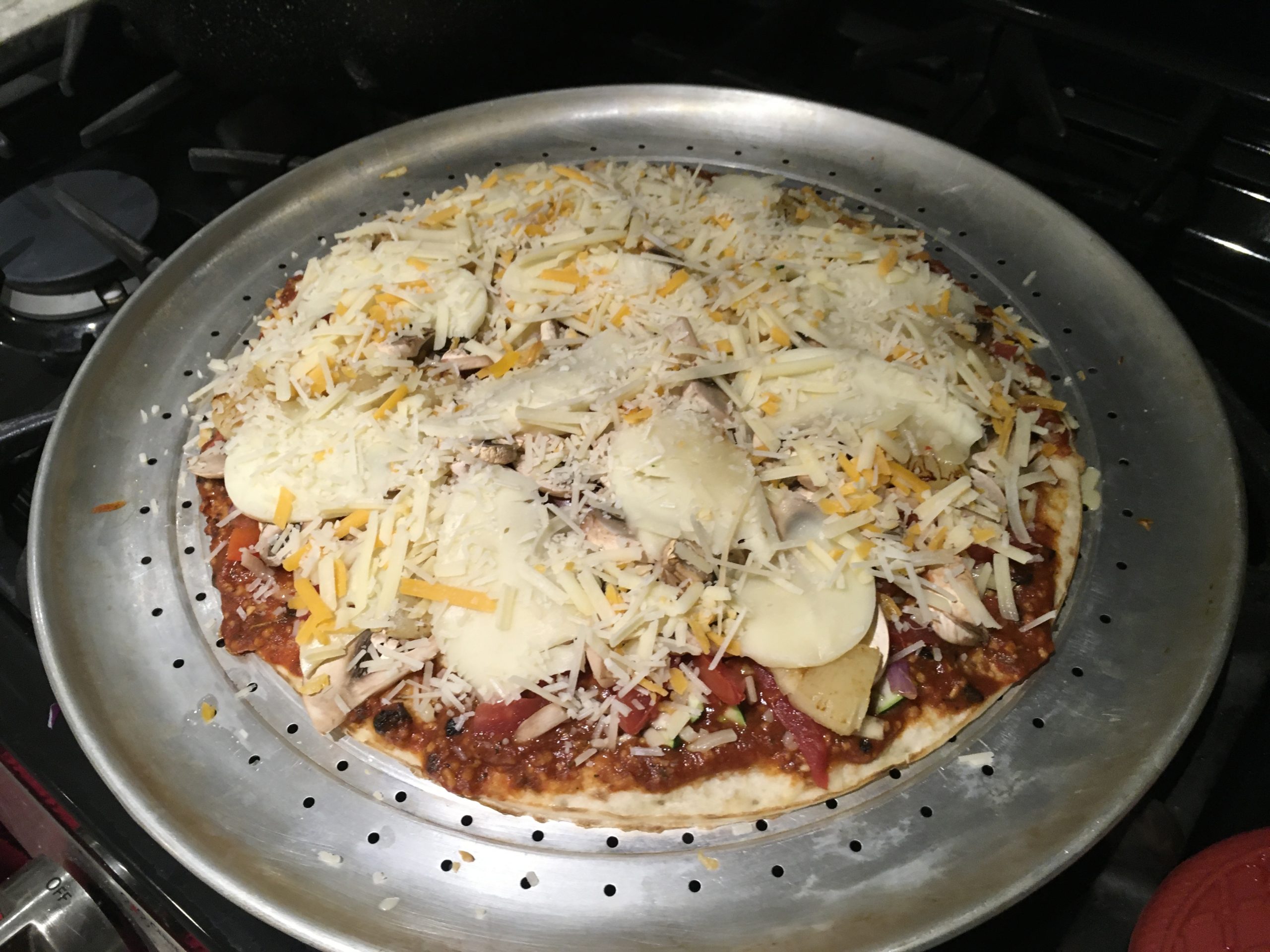 I then spread my sauce on the melted cheese, layered the chopped vegetables and the pineapple pieces on that, and stuck the pizza back in the oven for a second warming phase. Not very long, this time, though.

I’ve skipped several warming steps here, as you can see. Then when the veggies had had a chance to dehydrate a bit and I could see the steam lightly rising, I removed the pizza, topped it with the cut and grated cheeses, the put it back in the oven to cook. By conflating the steps I had perhaps saved myself ten to fifteen minutes of time. Was it worth it, though? 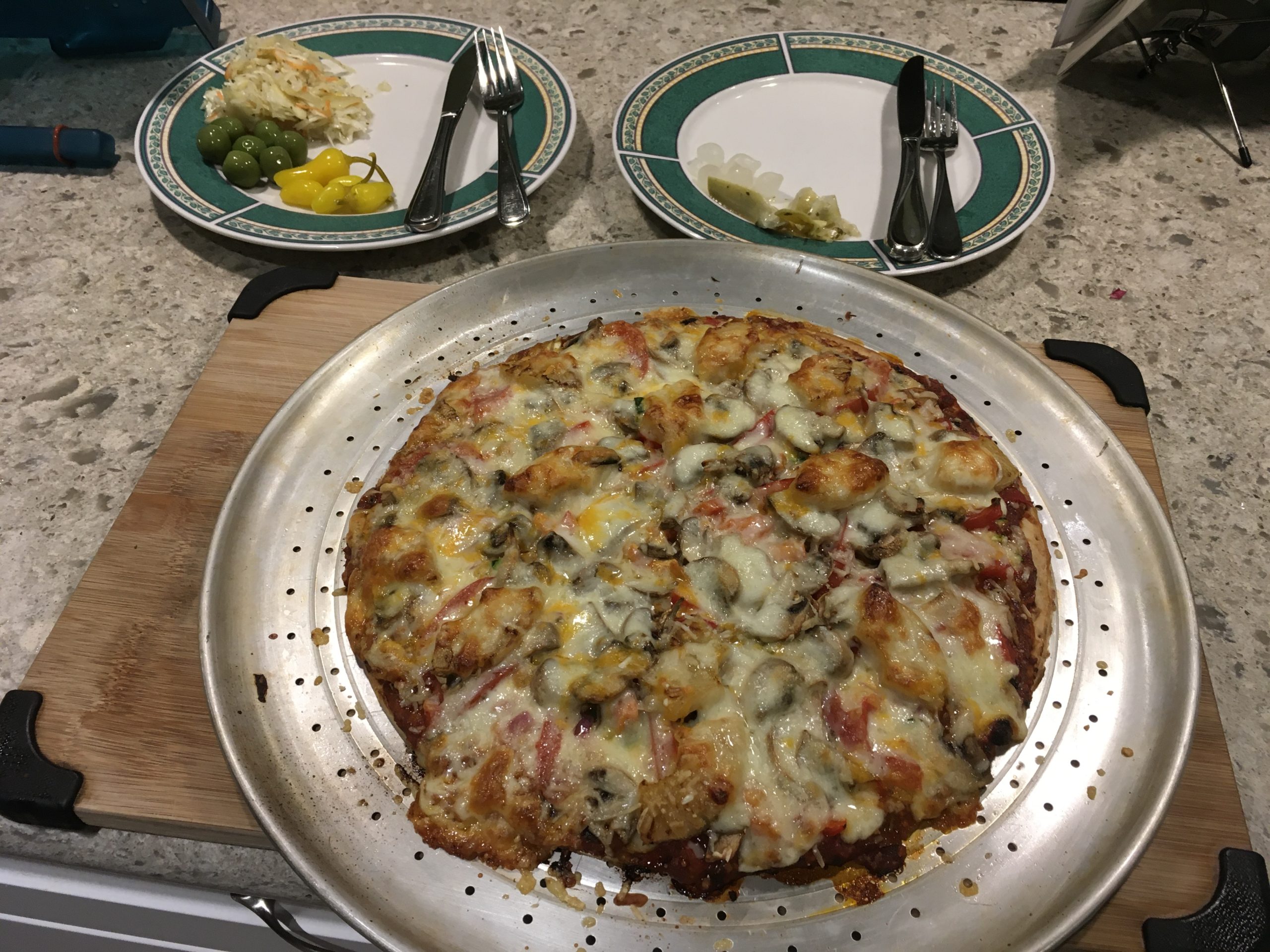 The result was tasty enough, but the veggies didn’t have enough time to dehydrate as much as I prefer. The toppings were a bit watery. This didn’t make for a soggy crust, of course, because of the oil-and-cheese layer I put on in the earlier steps. The crust was less crunchy and leathery than with the rack at a higher level, but not different enough to ascribe to the changed process or rack height. The veggies were slightly undercooked again, which meant they still had a bit of crunch: the way I prefer them.

I believe the sauce and the lower level of toppings didn’t have enough time to dehydrate with the reduced steps, and with the cheese above the moisture couldn’t escape. I think I’ll go back to my old method, while I ponder other alternatives.

A different method I might try would be to warm the sauce and veggies in separate frying pans or pots before spreading or layering on the crust. I’ve even considered mixing the minced vegetables (onion, pepper, zucchini) with the sauce and heating it all together (to reduce the moisture) before basting the melted cheese with it. As long as I don’t heat it too much to make it too thick, and hard to spread, it might work. I’ve even wondered what would happen if I blended it all together… so many things to try next time I make pizza. Maybe we’ll have one again next month so I can experiment further.