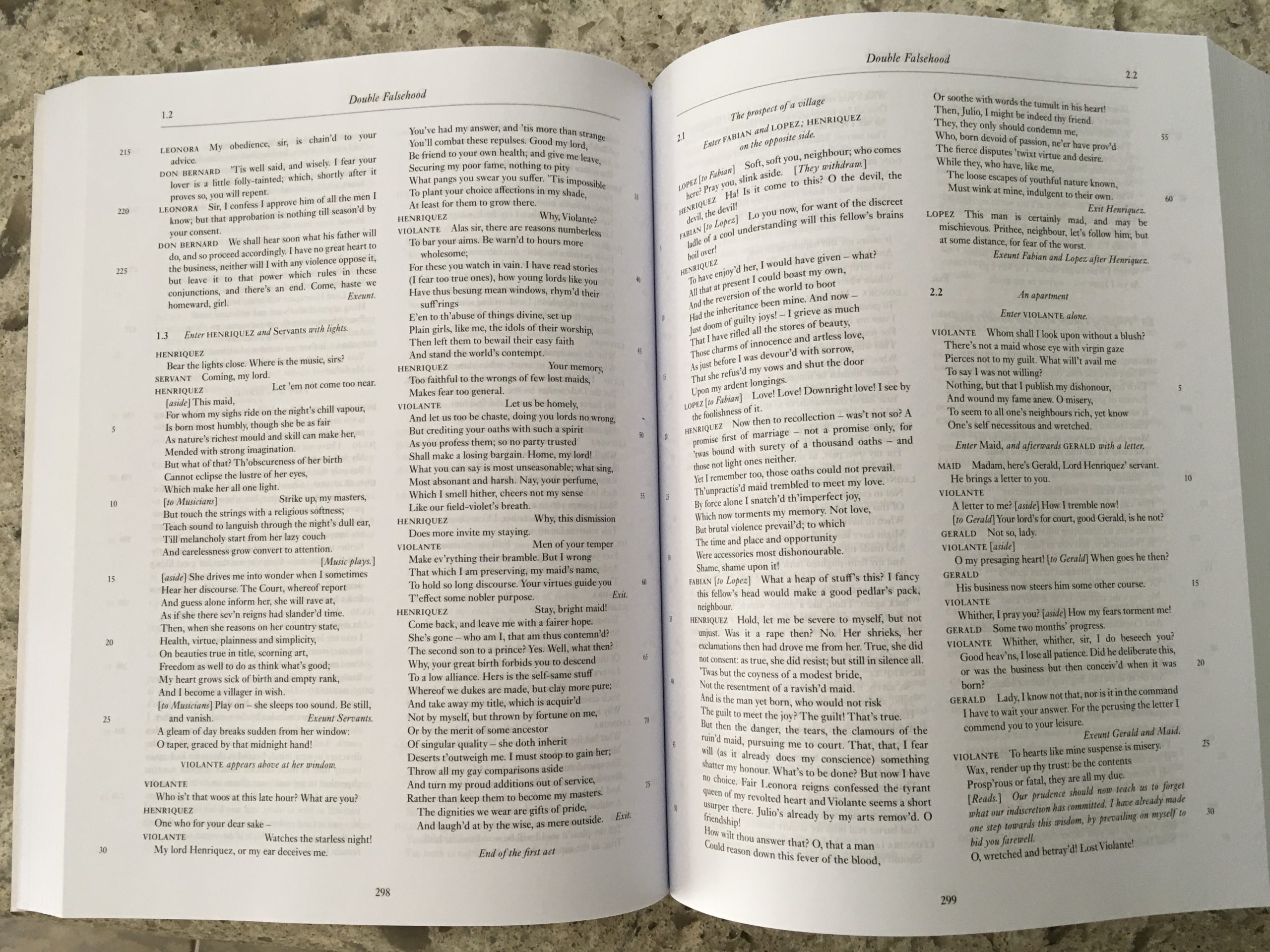 Wonderful thing, the internet. You can type “complete works reading list Shakespeare” into a search engine and come up with dozens of lists with a recommended order for reading The Bard’s plays and poems over the period of a year. And none of them the same or seemingly made with the same logic. But, it seems, many have taken up the challenge.

In almost no time, I had several lists to examine (here’s a PDF I made of the first few I discovered and collated) and consider in light of my own desire to read all the Bard’s plays (and some of the poems) in a single year. That includes all plays from the First Folio, plus Pericles and The Two Noble Kinsmen, the apocryphal Sir Thomas More, and Edward III, plus 154 Sonnets and the longer poems (Venus, Lucrece, Phoenix, Lover’s Complaint, Pilgrim). I think I’ll save the apocryphal Double Falsehood and Edmund Ironside for year two.

Seems daunting? Not really; not if you read regularly, and daily like we do. Let’s break it down to some numbers (these figures refer to titles in my collection of Complete Works). Before I choose an order, which book(s) should I read from? And what’s involved? (I’ve made a spreadsheet to track my progress, with some useful bits of information about the dates, number of lines and words in the plays. You’re welcome to use it and customize it to fit your own use).

The Norton Complete Works has 3,420 pages, including essays, introduction, indexes, chronicle, bibliography, images… to read the whole book, cover-to-cover I’d only need to read nine or ten pages a day. Easy. But assuming I’m going to read only 3,000 pages, or about 90% of the book, I’m down to under nine pages a day. That’s about a fifth to a tenth of what I typically read daily. And its plays are printed in a single column, so they are visually easier. But, true, Shakespeare is a trifle more difficult to read than, say a scifi novel or a history.

Similarly, the RSC edition (also a single column presentation) has 2,485 pages, but they are wider pages, so the essays have more text to read. Still, that’s about seven pages a day. The drawback here is the RSC’s size: a bit too big for reading comfortably in bed

The QPB edition does not have page numbers, but I estimate 600-700 pages per volume, and six volumes, or about 3,600-4,200 pages for the set. That’s about 12 pages a day (but since it lacks several later additions to the canon. I’d need to read more in another source to fit the rest in). But this version is easy to read with large type, and well-spaced lines, so I suspect I could read more pages per day.

The Arden (1,460 pages), Pelican (1,784 pages), Collins (1,433 pages) and Globe (2,364 pages) editions are all presented in double columns (as shown in the photo of the Arden edition, above), so each page contains roughly twice as much text to read as the single-column versions. These would require me to read four, five, four and seven pages, respectively, but would be equivalent of reading twice that many pages in a single-column format.

There’s another way to look at it: words and lines. Word and lines counts vary from source to source depending on how they are counted, (e.g. are stage directions counted as lines?) and which version is used for counting. But they are close enough for my rough purposes.

I have word counts for all the Folio plays, plus The Two Noble Kinsmen, Edward III (word count here). I have nothing official for the poems, or the plays Sir Thomas More, and Double Falsehood yet, but have done some work to find numbers using my own tools (see below).*

Lines are similarly a bit confused in their counting, but for the 37 plays, I’ve found counts that total between 103,010 and 108,142 and for the 41 plays a total of 115,919. Since lines vary in length from a single word to many, it’s not realistic to measure progress by them, but to get through all the 41 plays, I’d need to read about 320 lines per day. My QPB editions have roughly 20 lines per page (between 17 and 27 by rough estimation). So that’s 16 pages of that edition per day. Other editions vary considerably: Norton, for example, has approx. 50 lines per page.

However, I’m not going to read the Globe edition (too big and unwieldy), although it has plenty of illustrations and white space, reducing the number of pages for the plays by easily 10 percent, if not much higher.  Besides, the typography in the Globe edition is very dated.

I won’t read the Arden, except for its essays and introductions, because it lacks the necessary footnotes and explanations to help my reading.  It may serve as a backup for comparison with questionable lines or words. The Collins has even less of that material, so I won’t consider it, either, as my main text.

And since I just finished Henry VIII a couple of weeks ago, and am currently working through The Tempest (and will be finished it before my birthday when I planned to start this challenge), I am unlikely to re-read either in the year. So that reduces the amount required to read the entire canon (or maybe gives me time to get in some apocrypha).

Given that I will often read while sitting outside on the deck with tea or wine in warmer weather, I think it will be likely to read more in the summer than winter. I will probably read a QPB volume when outdoors (the chances of damaging or soiling the book is higher outside, and don’t want to risk the Norton). The Norton edition will be saved for indoor reading and possibly bedtime. The Pelican will be my other outdoor option. Should I get the Oxford edition sometime in the interim (one can always hope), it might replace the Pelican.

So in what order should I read everything? Not chronologically, based on when they are assumed to have been written, since that’s not always agreed on (I note some conflicting dates in my spreadsheet). Plus that creates some oddities, such as reading Henry VI parts two and three before part one.  And jumping back in history to read Richard III before Richard II and King John after both. While not connected by characters or action, it strikes me more appropriate to read the English history plays in order of action. In strict chronological order, I’d end up reading both parts of Henry IV then the comedy Much Ado About Nothing before Henry V, which is directly connected to the Henry IV plays.  I think I want to read at least some of the history plays in order.

My plan is to first read the synopsis of the play in The Essential Shakespeare Handbook (DK publishing, 2004). This provides a nicely-illustrated, compact description of each play (nine easily-read pages per play, with notes on performances, what to look for, characters, historical background, sources, film, stage, plot, etc.). Then to read the introduction to the play in the edition I have for it. Then after I have read the play, I will read any following notes or essays (e.g. on the text, the sources, the printing history) if I deem them relevant, before moving on to a new play.

I am tempted to dive into the deep end with the very longest play: Hamlet, partly because I’ve just watched both movies of the RSC production and the Mel Gibson version (trust me: the RSC version is significantly superior; Gibson is a poor choice for the role), so the plot and characters are rather fresh in my mind. But maybe I’ll fall back on a more familiar play I’ve read in the past like Julius Caesar (a favourite), Romeo and Juliet,  Anthony and Cleopatra, or Much Ado About Nothing… or perhaps I should tackle one I’ve never fully read, like Cymbeline, or Two Gentlemen of Verona… or maybe even King John…