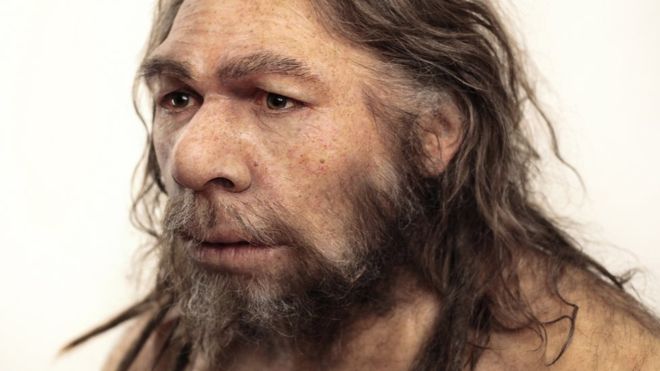 Squat, hairy, broad shoulders, a big nose, beetle-browed with a low forehead. As Blind Willie McTell wrote in his classic song, Statesboro Blues, “I know ain’t good lookin’, but I swear I’m some sweet woman’s angel child.” That line might have been written for early Neanderthal cousins. First described as dim-witted and brutish, our more recent assessment of them is far less critical, especially of their tool-making and culture.

But even the most complimentary of modern descriptions still make them out to be rather lumpish, heavyset characters. Barrel-chested. Robust, we call them today. Big brains, though, and better eyesight than we have. Nice personalities, too, I bet.

And it seems some of our own ancestors loved them for it. You never know what makes the heart strings sing, after all.

Humans and Neanderthals had sex. But was it for love? That’s the title of a recent article on Vox by Brian Resnick. It addresses the complexities behind human-Neanderthal coupling.

And couple they did. The results of which are bound within us, wrapped into our DNA even now: between one and four percent of our genetic strands are from Neanderthal sources.* And they had about 97% of their DNA in common with ours. Who’s your daddy now?

(That Neanderthal DNA is most likely responsible for our plucky immune system, by the way…)

Resnick asks, And asks, “Could a human and a Neanderthal fall in love?” And I reply, “Why not?”

Most of what we think about as right or wrong or appropriate or proper or even fun about sex is culturally initiated, not biologically driven. It’s the same about food, music, theatre, beauty, clothing or house styles: our response is often a Pavlovian result of our upbringing, the nurture component of our lives interfering with our basic hormonal urges.

But sometimes biology just takes its course. We don’t know. We don’t know if sex was a ritualized thing, a trivial act, or anything else. Maybe sex was a commodity, traded between species. A little nooky for a haunch of that mammoth you just killed? Throw in a skinful of those berries and we can have foreplay, too…?

You can imagine some fur-wrapped homo sapiens hunter sitting around the fire inching up to a Neanderthal woman while trying to work out the sign language (Neanderthals may have had speech but neither species would know each other’s, at least on first encounter) for “Hey baby, come here often?” Or maybe a Neanderthal shaman ambling up to a cute homo sapiens woman, offering her a sip from his gourd of the potent psychedelics brewed for his bear-god worship trances; “Can I buy you a drink?”

When they did the beast-with-two-backs thing is open for debate. Modern humans (homo sapiens) have been on the planet for the past 200,000 years. Neanderthals date back as far as 600,000 years, sprouting from a common ancestor they shared with us (Homo erectus?).

They roamed Europe and the steppes for about 100,000 years, dying out (or being hunted to extinction by our modern ancestors…) somewhere about 40,000 years ago (some scientists say Neanderthals vanished later: 30,000 years ago, or even less).

Some researchers think Neanderthals couldn’t handle the changing climate of the warming post-glacial world, and simply fell prey to Darwinian pressures from the environment. Others go for the killing floor theory. The debate is still raging.

Modern humans reached Europe maybe five or six millennia before that. So the two species had plenty time in which to party. Assuming our side wasn’t busy wiping their side out, that is. Genetic research points to some hootchie-kootchie happening between Neanderthals and modern humans sometime between 50,000 and 60,000 years ago, right about the time our own ancestors were emerging from Africa. First impressions seem favourable.

Imagine the shock our ancestors had running into an already-ancient race, one that had developed a complex culture and society long, long before we did… (don’t go all conspiracy-theory on that idea: this was still the Stone Age, after all… but they probably did have music…)

And maybe even earlier. Resnick interviews scientists who think that there were earlier human incursions into Europe that resulted in DNA-swapping 100,000 years ago:

Meeting a Neanderthal must have been an uncanny experience: like Star Trek characters encountering Vulcans for the first time. Here’s a species that looks remarkably like us, but it is not us.

If those match-ups happened, they were fleeting. Humans didn’t survive those initial excursions out of Africa. Only the robust Neanderthals were suited for the cold life on the edge of the glaciers. But there may have been half-breeds who survived, hybrid human-Neanderthals who carried the genes of both parents.

Carl Zimmer, writing in the New York Times, noted that modern humans interbred with Neanderthals and Denisovians – another group that also shared the common ancestor some 500-600,000 years ago – at several times in our history, possibly during four periods of intense interaction:

The ancestors of modern humans interbred with Neanderthals and another extinct line of humans known as the Denisovans at least four times in the course of prehistory, according to an analysis of global genomes…

But was it love? Consensual sex? Or forced sex with captives or slaves taken during raids? That’s a pretty common theme in our history, so why not way back then? Or maybe, as some scientists conjecture, we felt so much lust for Neanderthals that we sexed them out of existence. We bred with them so much and so often that they simply became part of our species. Extinction by hybridization.

As Brian Handwerk wrote in the National Geographic:

Over generations of genetic mixing, the Neanderthal genome would have dissolved, absorbed into the Homo sapiens population, which was much larger.
“If you increase the mobility of the groups in the places where they live, you end up increasing the gene flow between the two different populations, until eventually one population disappears as a clearly defined group,” said study co-author C. Michael Barton, an archaeologst at Arizona State University’s School of Human Evolution and Social Change.

Neanderthals were a remarkable species and we’ve had to revise our impression of them from dumb brutes to pretty sophisticated folk these past few decades. Folks with a complicated, advanced culture, tool users, with a complex ritual of death and obvious religion, the makers of the first music, and probably conversationalists. On the Smithsonian site, Joe Alper, writes:

Recent studies suggest they were imaginative enough to carve artful objects and perhaps clever enough to invent a language.
Neanderthals, traditionally designated Homo sapiens neanderthalensis, were not only “human” but also, it turns out, more “modern” than scientists previously allowed. “In the minds of the European anthropologists who first studied them, Neanderthals were the embodiment of primitive humans, subhumans if you will,” says Fred H. Smith, a physical anthropologist at LoyolaUniversity in Chicago who has been studying Neanderthal DNA. “They were believed to be scavengers who made primitive tools and were incapable of language or symbolic thought.”Now, he says, researchers believe that Neanderthals “were highly intelligent, able to adapt to a wide variety of ecologicalzones, and capable of developing highly functional tools to help them do so. They were quite accomplished.”

So maybe to the early, primitive humans, Neanderthals looked like a suave, sexy bunch. Maybe that shaggy guy in the furs instead of being a ‘inarticulate mass of lifeless tissue’ as he was portrayed in the 19th century, was the contemporary version of the ‘cultured, sophisticated man about town.’ And that might just tug on the ol’ heart strings.

Or maybe it was just practicality: on a cold winter night at the base of the glacier, a little warmth might mean the difference between survival and those big, hairy folk with their furs and fires and caves were a lot warmer than a cold rock under a tree. And maybe that ain’t love, but it’ll have to do.

~~~~~
* Apparently this isn’t true of people with solely African ancestry, who have no Neanderthal DNA mixed with theirs. That’s most likely because, as far as anyone has discovered to date, Neanderthals ranged through Europe, the Middle East, and across to the Urals, but didn’t get into Asia or Africa. No opportunities for cross-pollination. Modern Eurasians also have a couple of percentage points of Denisovian DNA entangled with theirs.