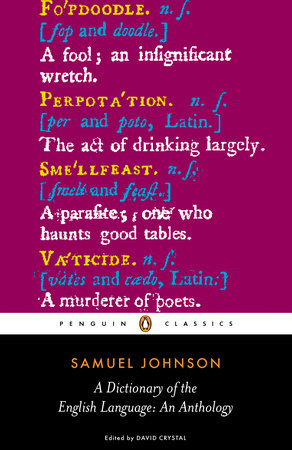 When a copy of this selection from Samuel Johnson’s famous dictionary arrived last week, I was delighted, and immediately reminded of my late, and well-loved friend, Bill. He would have appreciated the book, chuckled over Johnson’s witty definitions, delighted in the words at play. We would have sat around the kitchen counter, alternately reading random definitions from the book, in between sips of wine.

Like every good writer I’ve ever known, Bill loved words, puns, wit, and the interplay of language.

Sadly, Bill died of esophageal cancer late last year, the same cancer that took my father a few years earlier. A nasty, painful, flesh-wasting disease.  Because of that, Bill and I never got to sit down and share our thoughts about this book over a glass of wine, as we had done many times over many different books, before. I saw him a couple of weeks before his death, as he lay, bedridden, in palliative care. A thin shadow of the man who used to come up for long weekends to spend time with us.

Bill was a passionate reader and we shared many books and interests in common; especially those on Napoleonic and English history. He had a passion for British naval history, and Jane Austen’s life and times, and he was a fount of knowledge about the late 18th and early 19th centuries. He could quote Shakespeare, Gilbert & Sullivan, and Austen. He introduced us to numerous BBC dramas, comedies, and specials, and he was generous in lending his DVDs of them. He had a musical streak and we played guitar and ukulele together. And, of course, he loved words.

I was reading through this book the other night, and wondered how Johnson himself felt about friendship and death. James Boswell was his biographer, friend and companion late in his life, but did they share the same sort of closeness as I had with Bill? Boswell went off on a trip to Scotland when Johnson was sick, and was away when the latter died, in 1784. How did Johnson feel about Boswell’s absence, or Boswell and being so far away when his friend died?

Boswell’s comment on hearing of the death was, “He has made a chasm, which not only nothing can fill up, but which nothing has a tendency to fill up.” I felt similarly, when Barbara, Bill’s wife, called to tell me of passing, last year. And I felt relieved, not that he was gone, but that his suffering was finally over. I am not ashamed to admit I cried at the news.

I’d known Bill since the late 1970s-early ’80s, back when we both worked on InfoAge magazine, years even before I met Susan. Many the evening back then we stayed up late and talked, sometimes argued, and drank our wine while playing chess, go, or some wargame – at which he almost always won. He was the smartest, funniest man I ever met and my time with him – our time, really, since he was a friend to both of us – was precious.

Michel de Montaigne wrote in his Essays that those people we “…commonly call friends, and friendships, are nothing but acquaintance, and familiarities, either occasionally contracted, or upon some design, by means of which, there happens some little intercourse betwixt our souls: but in the friendship I speak of, they mix and work themselves into one piece, with so universal a mixture, that there is no more sign of the seam by which they were first conjoyn’d.”

Montaigne believed we could only have one true friend in our lives. I don’t agree, but the number of truly close friends anyone can maintain simultaneously will always be limited. Intimacy cannot be spread too thinly, else it has no substance. Calling some Facebook stranger who you allow into your circle a “friend” is a mockery of the word. But Bill was a true and close friend.

I have had only a handful of close, dearly loved friends; a number I could easily count on my fingers. Few remain in my life today. Some are dead, others separated by distance and the gradual widening of the chasms of changing interests, family, and career paths. And for some, we simply outgrew one another. But I still treasure the memories, as I will my time with Bill. I will miss not being able to pick up the phone and chat with him about some book, some movie, some new song I’ve learned.

At my age, the death of my peers isn’t uncommon or even unexpected. None of us are getting out of here alive.  Inevitability, however, doesn’t make it any less painful when someone close dies. Friends remain alive within us, a living part of our memories, never entirely gone as long as we remember, but I still miss those late-night chess games and discussions about politics, religion, sex, death, and life. And I wish he was still here so we could talk about Johnson and his dictionary; the conversation would have been entertaining and insightful.

Bill was a writer and editor, among his many talents and roles. In all my time with him, I cannot ever recall him using an inappropriate word, or placing a comma in the wrong place in a document. There are many days when I struggle to craft a sentence cleanly and concisely; Bill seemed to be able to do it effortlessly, a talent I both admired and envied. He read some of my manuscripts for me before publication; few people I know have been able to correct both my usage and pronunciation as Bill did.

It may be an odd association to you, but I expect to always think of Bill every time I pick up one of my Johnson collections to peruse. Every time I read a witty line, I will imagine how Bill might have read it and responded, likely with a clever wordplay or pun of his own. There is some joy in the wordplay that connects Bill and Johnson in my mind.

I close with Johnson’s own words; his definition of friend, which strikes home to me: “One joined to another in mutual benevolence and intimacy…”