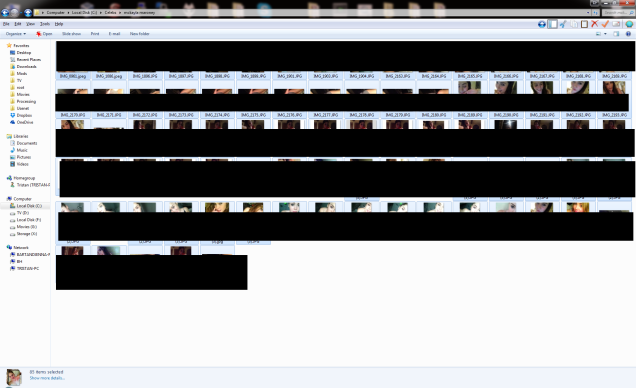 Suddenly the Net lit up with headlines news: celebrity nude photos leaked! Videos too! Facebook timelines were replete with media stories. Shock. Horror. Voyeurism. Click, click, click the viewers racked up the view count as they raced to the sites just in case they actually showed something. A little flesh to feed our insatiable desire to gawk.

All ignored while we look for photos of naked “celebrities.” Who needs to worry about terrorism, poverty, hunger, disease, who needs to ponder solutions to the world’s ills when we can look at tits and ass. And famous tits and ass at that.

Many web sites scrambled to share them as quickly as possible before threats of legal action forced their removal. And if not posting them, they posted links to the sites that did. The (recently updated) headline on Gawker reads, “J-Law, Kate Upton Nudes Leak: Web Explodes Over Hacked Celeb Pics.” and continues:

The list of celebrities whose nudes are supposedly in this cache includes Jennifer Lawrence, Avril Lavigne, Kate Upton, Lea Michele, and McKayla Maroney, and several of them—the photos, not the celebs—have begun to show up on various message boards across the internet.

What does this say about the society we’re created, that we are more drawn to a cheesecake than big, important, world-changing issues? (another Gawker story notes these photos have been circulating for a while in file-sharing sites…)

Our brave new online culture allows us to become a nation of anonymous peepers and stalkers. Gawkers who pursue the titillating, the trivial and the salacious; we consume the gossip and rumour eagerly. We revel in conspiracies and wild allegations, while rejecting facts, data and common sense. The highly-popular Gawker site, with its salacious gossip and celebrity trivia, is the perfect embodiment of our shallowness: it is the supermarket tabloid on steroids.

Who needs truth when you can have rumour and innuendo? Ah, haven’t we learned that in local politics already…

But why isn’t anyone asking: what were there nude pictures doing online in the first place?

First, who takes nude pictures of themselves with a device designed to share its content? A device easily hacked, stolen or lost. And then puts them online in a cloud service on the easily hacked internet? That’s just inviting the inevitable. Even a six-year-old knows a digital camera is a million times more secure than a smartphone. If you must take them, at least store them in a safe place, a memory stick in a hidden place, not even on a computer.

Okay, maybe the first question should be: why did these “celebrities” take nude pictures of themselves in the first place? For what or for whom were they intended? Were they just narcissistic, or intended to arouse interest in mates, or potential mates? Maybe I’m just old fashioned, but I don’t see the need to take intimate, explicit photos of yourself (especially in the celebrity culture where mates seem to go through the revolving door at remarkable speed…)

Or were they actually intended to be leaked to generate viral publicity for the “celebrities” to gain more name recognition (and perhaps a little sympathy)? Maybe it is just my ignorance of popular celebrity culture, but I didn’t recognize more than two of them in the list of names, so perhaps a few are in need of some immediate PR resuscitation. That has happened in the past with other glitterati. Notoriety works well for getting media attention.

But this wasn’t one or two people with flagging media profiles: it was a fairly large number who were affected, some seemingly well-known: sixteen are shown in this Gawker post). A link in this Guardian story shows a screen shot of many more names (more than 100 have been reported). And according to Buzzfeed, there were movies, too, and images of at least one girl aged 16 among them (hence the child pornography aspect to some of the stories).

The FBI have been called in to investigate. That’s a band-aid solution on a bleeding corpse covered with hacker-induced wounds, if you ask me. There will always be “leaks” of this nature because we’re conditioned to salivate over the glitterati and there will always be paparazzi and hackers to feed it.

And in a bizarre twist, apparently some of the photos may not even be real, just photoshopped to feed our insatiable desire to see naked celebrity flesh. That, however, doesn’t seem to have dulled the feeding frenzy to find them:

4chan users uploaded a purported “master list” referencing about 100 actresses, singers and athletes. Blacked-out desktop screenshots suggest the existence of unreleased photographs, and users have repeatedly referenced videos that do not appear to be public.

However, several women have already denied the veracity of the photos, including Victoria Justice and Ariana Grande. (While one image of Justice was almost certainly fake, 4chan and Reddit users have gone to great length photo-matching to demonstrate the authenticity of others.) Old, also fake images of Selena Gomez are also reportedly in circulation.

As Roxane Gay wrote in The Guardian:

For celebrities, privacy is utterly nonexistent. You are asked intrusive questions about your personal life. You can be photographed at any moment. Your family is investigated, photographed or harassed daily – parents, children, sometimes even siblings also losing any semblance of privacy simply because you share the same blood or name. Celebrity is, in some ways, an infection that is only marginally beneficial… This leak is likely only the beginning. Because there will always be another leak, because there is an insatiable curiosity when it comes to the nude celebrity woman’s body. She puts herself in the public eye and, in turn, we are entitled to see as much of her as we so desire, or so I am sure the justification goes.

As Ms. Gay writes, there is a loud subtext here about the “…exploitative exposure of women’s naked bodies,,,” that men never suffer from. She concludes:

The Great Celebrity Naked Photo Leak of 2014 – or perhaps we should call it The Great Celebrity Naked Photo Leak of August 2014, given that this happens so often that there won’t be only one this year – is meant to remind women of their place. Don’t get too high and mighty, ladies. Don’t step out of line. Don’t do anything to upset or disappoint men who feel entitled to your time, bodies, affection or attention. Your bared body can always be used as a weapon against you. You bared body can always be used to shame and humiliate you. Your bared body is at once desired and loathed.

Also in the Guardian, Van Badham wrote in a piece titled, “If you click on Jennifer Lawrence’s naked pictures, you’re perpetuating her abuse:”

It’s not merely tawdry that the private sexual conversations of partners are now being disseminated like memes. Sharing these images is not the same as making a joke including characters such as Doge, Grumpy Cat and Sad Keanu. It’s an act of sexual violation, and it deserves the same social and legal punishment as meted out to stalkers and other sexual predators.

An angry Kate Knibbs lashed out on Gizmodo against the hackers:

Apple has not commented on how exactly hackers got their pathetic, pervy hands on the private photos of talented famous people like Jennifer Lawrence and Hope Solo, but the snot-gobbling basement dwellers who reposted the pictures like grossly violating the privacy of a celebrity could somehow erase the deep-rooted pettiness of their lives … No matter how they did it, the flaccid-dicked trashcans who spread the hacked photos around are now under Apple scrutiny.

Maybe I’m just an old cynic, but I suspect only a few people are agonizing over the moral issue of exploitation, and a lot more are googling to see if they can find the images. That’s because the internet perpetuates and strengthens the gawker culture. It’s the old ‘bread and circuses’ theme. If people are fixated on the circuses – or nude celebrity photos in this case – they won’t be spending much time worrying about what governments, corporations, bosses, or even criminals are doing.

Hackers attack and steal and infect everything online and have done for decades. Most people will likely look on this as just more celebrity cheesecake, not like Edward Snowden and Julian Assange raising the issues about national security. They will gawk at the nudity, download a few images, then move on to the next bit of gossip or rumour.

Many sites and media outlets cater to our gawker culture, not simply the social media treadmills that encourage its spread because it creates more opportunities for advertising. When there isn’t flesh to expose, there’s always lies, allegation, innuendo and a quick wade in the excrement of whisper campaigns. There’s a ready, even eager market for such trash.

Methinks the real story is less about the hackers – flaccid or otherwise – than about the more complex questions about our gawker culture. How did we get to this stage where we even take such photos in the first place, and why do they mesmerize millions of people? What do we need to do to change it and put some moral fibre into our cultural backbone?