There’s a gravel trail that runs along the waterfront, north of the Shipyards development, that’s been blocked by barricades since the spring. It’s been that way at least six months, perhaps longer. The path suffered erosion and some holes opened up along it. These were marked by barricades. Sort of.

Most of the barricades collapsed some weeks (months?) ago, but no one from the town has bothered to pick them up. Yet someone from the town regularly fills the nearby dog mitt dispenser on the trail, so that person or persons must see the fallen barricade every time they do that. 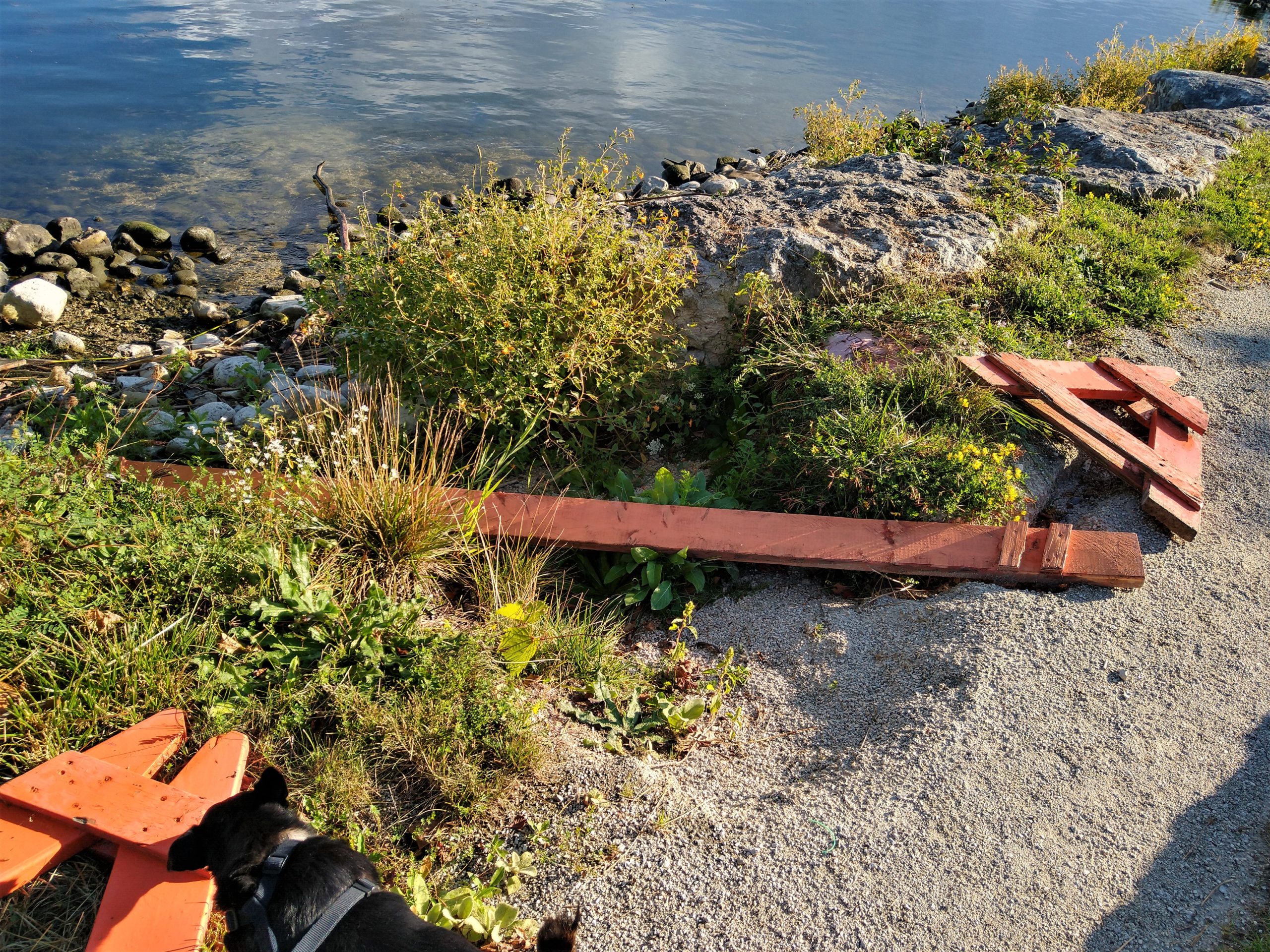 The neglectful state of this trail is a metaphor for the state of the whole community. And a lot of people are talking about how run down and shabby the town seems these days. Where has our civic pride gone?

From the disrespect of our heritage walkway to our scruffy, poorly-tended parks; to our corroded lamposts; to the unwatered and untended, weed-infested public gardens around the pool and downtown; to the unkempt condition of the boxcars at the museum; to our potholed streets and crumbling sidewalks; to our decaying grain terminals; to the rusty fire hydrants; to the dilapidated parking meters downtown; to the overgrown bus stops and graffiti-marred bus shelters; to the purple loosestrife growing around the waterfront; to the tire tracks that mar Harbourview Park’s trails; to the dirty, unkept letters that say CWOOD in front of town hall: this town feels neglected, scruffy, dirty. Like no one really gives a damn.

Have you visited Friendship Park of late? It’s an embarrassment.

The park’s gravel path has weeds, there was vandalism on a rock that was never cleaned up, the torii needs painting, the gazebo is falling apart, there is graffiti on its seats, the stream is choked with algae… it’s a monument to the town’s utter indifference to both the park and the Sister City relationship it represents. Or perhaps I should say the town’s disrespect. There’s a tattered flag that flies there, too:

Ever look closely at the railway cars parked behind the museum? They are decaying, and dirty; paint is peeling; the one used by the museum for storage has bird poop on its railings and filthy windows. They are supposed to be icons of our history, but they look a mess.

I believe there are political reasons for the neglect. First is the attitude of our council. Like the saying goes: dead fish stink from the head down. Council simply doesn’t care. They’ve been so obsessed with lavishing money (more than $10 million since 2015) on the Saunderson Vindictive Judicial Inquiry (SVJI) and on Mayor Saunderson’s and Councillor Hamlin’s sole-sourced former employers that they’ve not bothered to look further to see what needs to be done here. Civic pride is not on their radar because I doubt they have any.

There’s a gravel trail that leads down from the top of the berm to the east side’s asphalt trail (see below). Rain and wind have washed a considerable amount of gravel onto the asphalt, making it hazardous for cyclists, scooters, or even pedestrians. All it would take is someone in the town who cared enough to bring a broom or a rake to the site and brush the asphalt clean. But…

Most of the council members I reported on or served with over the years treated their role as a responsibility. They cared deeply about the community and felt obligated to watch over it, like shepherds. Sometimes to the point of micromanaging, but they did so out of love and respect. I recall Councillor Foley on his own riding mower cutting the town’s boulevard grass because he felt it looked too rough and unkempt. I doubt he would have tolerated the litter and fire pits left in Harbourview Park:

At least when I was in office, most councillors went around town, looking at our parks, our streets, our rivers and streams, looking at construction projects and infrastructure. When they saw something awry, they spoke to the department head about it. Not to give orders, but to inform, so the department head could deal with it, and wouldn’t be embarrassed by having it raised in public. They wanted Collingwood to look its best. These days, if councillors bother to speak at all about such things, they can only do so to the CAO.

Our mayor abandoned his commitment to his office earlier this year, hoping he’ll get a better-paying job as MPP in Toronto. That set the tone for the rest of the council to follow, and, of course, for the town staff as well. When the mayor doesn’t care, why should anyone else? And you can see the result around town every day: it looks like no one cares enough to clean it up, to fix things, to tend to the little things. Or being considerate, like not always driving on mud on trails where people walk:

(This week, I saw a town pickup truck that had been up on the berm turn and drive west along the Georgian Trail — a part of the pedestrian trail that often suffers from water and mud — south of the wastewater treatment plant to turn north on Birch Street, instead of taking the slightly longer route to drive on First Street as it should have.)

It’s not like our mayor is going to change that or suddenly start caring: he’s focused on getting to Queen’s Park, not doing what he was elected to do here in Collingwood. And the rest of council? It’s not like they were elected for their sense of civic responsibility, only for their loyalty to their Great Leader. They collect their paycheques and give themselves raises every year (twice in their first year!) Why should they do more?

Collingwood looks the way because it reflects how our mayor and council feels about, and behaves towards our town and our residents.