Media reports suggest that, like me, most Canadians breathed a large sigh of relief when Joe Biden won the US election and ended the proto-fascist regime in the USA. Not that I think he’s some sort of saviour of American politics: for all the rhetoric the Trump campaign spewed at him and his party, the Democrats are not leftwing, let alone radical. The most “radical” of them all — Bernie Sanders — would barely qualify as a centrist in most Western nations. And most of the rest would be firmly in conservative camps. What Americans chose was not a leftwing president, but rather a more moderate rightwing one.

And to be fair, Biden is far better than any of the proto-fascist Repugnicans who have risen over the past two decades, including Graham, Cruz, McConnell, and others. What Biden will usher in is not a revolution, but a calming normalcy to American politics; back to the cozy, pro-corporate paternalism it’s been for many decades. While politicians take their handouts from the lobbyists, citizens will be able to forget politics for a while and get back to the things that matter to them: Instagram, TikTok, TV, the glitterati, fast food, porn, Snapchat, guns, and pro sports. What Americans want most is for politics to go away and leave them alone.

American is broken in many ways, not least of all its election process and the deeply flawed, racist-based electoral college. Trump’s polarizing presidency highlighted how badly broken the nation is, how divided it is, and how close it has edged to rightwing totalitarianism. His election loss didn’t turn that around, merely slowed the clock. Don’t expect to see any changes in the way American policies are dictated by gun, corporate, and industry lobbyists under Biden.

Of course, it isn’t over yet: the Trump regime can continue its reign of terror, incompetence, illiterate ravings, rage, and racism well into January, 2021, but it’s heartwarming to know the ongoing damage to the USA and its allies will be limited to a few months. Unfortunately, it’s likely another 100,000 Americans will die of COVID-19 in that period because the administration won’t do anything about the pandemic any more than it has done since it began.

And as of this writing, Trump and his cabal have not conceded, and are making legal challenges to the vote (although, hypocritically, to the votes for the Senate and Congress, which took place on the same ballots…). This is simply being spiteful. As Heather Richardson wrote:

Right-wing media outlets also continue to insist, without evidence, that the election was fraudulent. The Fox News Channel is emphasizing the many lawsuits Trump has filed without mentioning that the lawsuits have all, so far, been thrown out for lack of evidence of any kind of fraud. Once again, Trump’s people are constructing a fictional narrative through “investigations,” a theme that, after former Secretary of State Hillary Clinton’s emails and Hunter Biden’s Ukraine work, should sound familiar.

Memes on right-wing media are expanding on this rumor. They call for holding a new election, promise that the Supreme Court will step in to give Trump the win, or assure Trump followers that the election will get thrown in the House of Representatives, where Republican states will hand the White House back to Trump. These attacks are taking a toll. On CBS News’s 60 Minutes today, Philadelphia City Commissioner Al Schmidt, a Republican, said the people counting ballots in the city have received death threats.

This is not normal. The outcome of this election is not in doubt. Trump’s lawyers have launched a number of lawsuits challenging the mail-in votes that favored Biden, but judges have thrown all of them out from lack of evidence of any kind of fraud. There is no reason to think that the Supreme Court will step in, or that the election will get thrown into the House, although either is technically possible and may be what the president is hoping for.

This isn’t just about the vote counting. By refusing to concede, Trump is ensuring a difficult transition of power. Biden can’t put his team in place, get the equipment or offices they need, engage with the outgoing administration to ensure files and documents are properly transitioned. It’s the sort of pettiness we’ve learned to expect from a small-minded, graceless, immature man who has no interest in the welfare of his country, just in being malicious and pouty. But his followers can take heart: Trump continues to golf at their expense, instead of running the country.

Sadly, Trump’s inevitable eviction from the White House (even if he goes kicking and screaming) won’t be the end of the populist, fascist right, just a hiatus. Long gone, it seems, are the days when conservatives were the defenders of people’s rights. Now they’re mostly conspiracy-addled, angry defenders of billionaire’s fortunes, corporate rights, and armed insurrection. At least they are mostly in the USA, although more and more we see the rise of the radical right here in Canada, too. (Alberta comes to mind…)

Of course, not all conspiracy-prone wingnuts are on the right: there are anti-vaxxers, anti-maskers, homeopath-loving, chakra cleansing, magic crystal-wearing, detoxing, anti-gluten, anti-GMO, anti-science, alien abduction conspiracy wingnuts on the left. But in general these stupidities are less dangerous than rightwing conspiracies, and their believers don’t go around waving assault rifles, planning coups, or engaging in mass shootings as the right enjoys doing, It’s difficult to launch a revolution when it conflicts with the time for your coffee enema and you can’t effectively throw a soy latte at a police line. But at least the left doesn’t populate the ranks of the pseudo-Christian Talibangelist movement that thrives in the USA and fuels many of the rightwing conspiracies.

I was recently reading (or rather, re-reading) the first of Ian Kershaw’s two-volume biography of Hitler, looking in part for historical precedents in the rise of the right between wars to see if there are parallels with today’s circumstances that might help us understand (and possibly circumvent) similar events happening here. Not that I think Canada is quite so prone to slide into authoritarianism as the USA, but when I look at Alberta’s sorry politics, it shows we’re not above that sort of cult-like, pod-people behaviour.

And let’s not pretend Trump and his cabinet are all Nazis. Despite their support for racist neo-Nazi causes and white supremacist movements, they do not espouse the same collective ideology as their followers. They encourage their followers to promote neo-Nazi, racist, and libertarian ideals in part because it draws away media and public attention from the more sinister pro-1%/pro-corporation/pro-predatory capitalist ideology that underlies the White House policies. Their followers are simply gullible fools who think the administration backs them rather than merely uses them.

Even so, there are parallels in the social upheavals in the 1920s and ’30s in Europe that can be found in the West today. For example, the emergence of rightwing Christianity and its support for an oppressive government they hoped would lead to a theocracy. This sector of the religion has moved away from a faith-based belief to a totalitarian, political ideology best described as the pseudo-Christian Talibangelists. Kershaw wrote:

Within the Protestant Church, there were those who looked to the coming Leader to bring about spiritual renewal and moral revival. The fall of the monarchy and the collapse of “God-given” authority, the secularization of society, and the perceived “crisis of faith” in German Protestantism all contributed to the readiness to look to a new form of leadership which could invoke ‘true’ Christian values.
Ian Kershaw: Hitler 1889-1936: Hubris, p. 181

Which reads remarkably like what has been happening in the Talibangelist movement over the last few decades and particularly among Trump supporters. The pseudo-Christian agenda has always been authoritarian, preferring to impose its own, cherry-picked morality and interpretations (usually replete with a rich dose of hypocrisy) on others than to allow others their own beliefs or views. That won’t end even when the huckster and con artist Paula White is turfed from the White House. 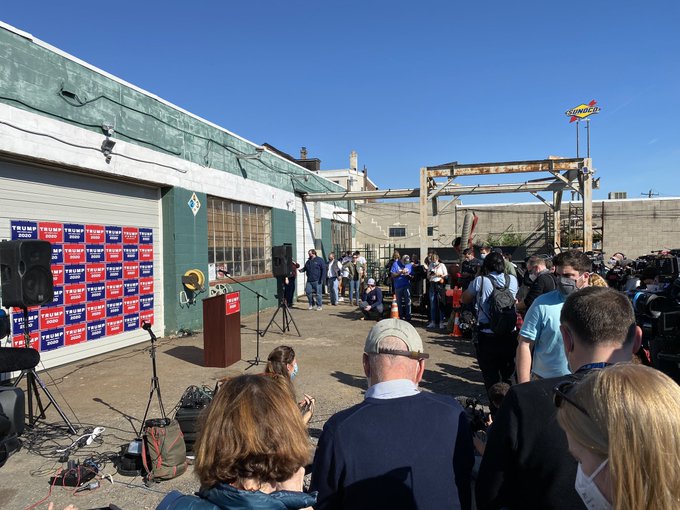 Perhaps the best metaphor for the last four years of Trump was his tweeted “big press conference” at the Four Seasons, Philadelphia — held not at the city’s luxury Four Seasons hotel but rather in a parking lot in front of the Four Seasons Total Landscaping office; in a one-storey strip mall, located between a crematorium and Fantasy Island — “a dildo store — sorry — an ‘adult book store’” in a dingy industrial section of the Philadelphia outskirts. The hotel had to publish its own notice that the event was not being held on its property. Rudy Giuliani was there to announce Trump would not be conceding the election, and to push his rightwing conspiracies about voter fraud. He stood on the grungy, oil-stained asphalt in front of a garage door, between a fire extinguisher and a coil of yellow fire hose. And rather than own up to the massive booking mistake, Trump’s team bumbled and stumbled trying to convince everyone that it was a deliberate choice. The jokes and memes on social media came fast and furious.

As one person commented, it was enough to make the British political satire, The Thick of It, look like a documentary. It was the perfect legacy for Trump’s time in office.