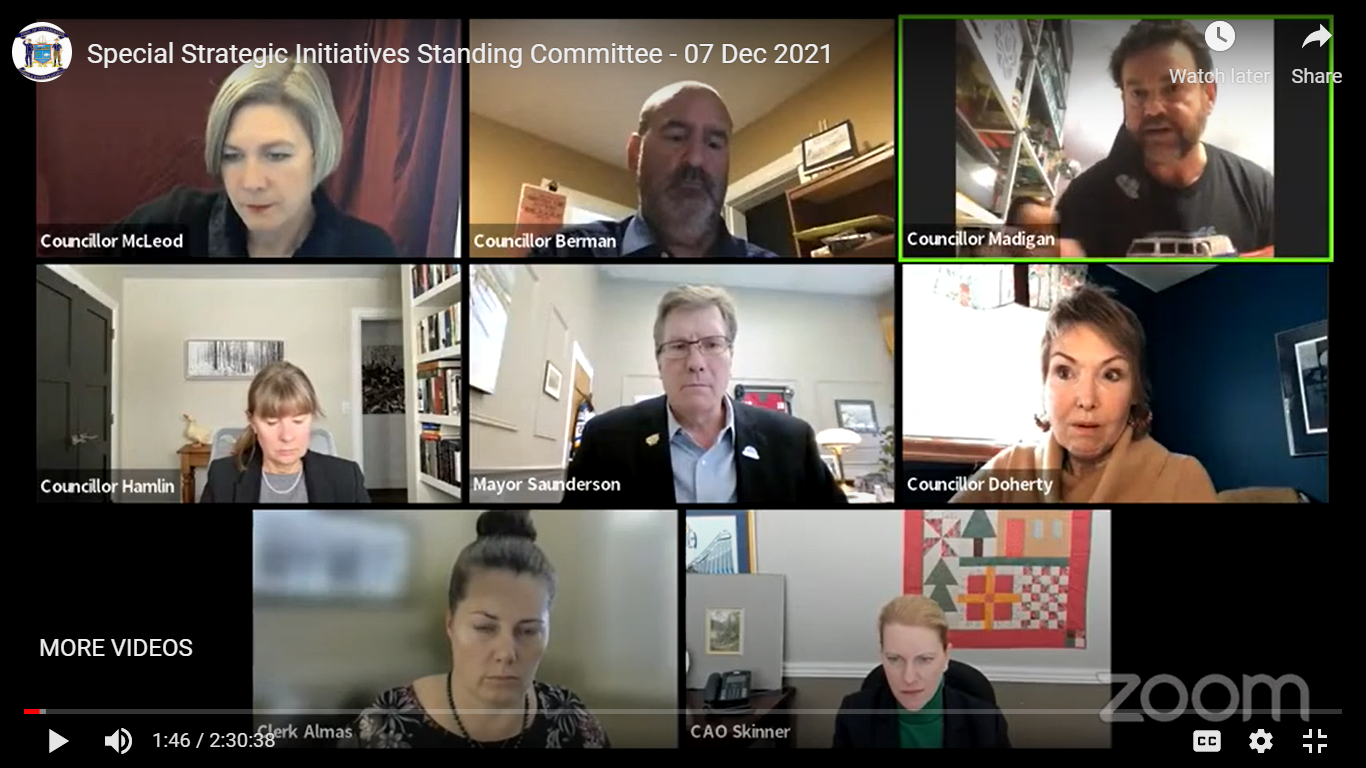 In the Dec. 7 meeting of the Strategic Initiatives Standing Committee, last Tuesday, one of the issues discussed was the replacement of Deputy Mayor Hull during his unexplained absence, as well the “potential” (nudge, nudge, wink, wink) “Mayoral Vacancy” (readers will recall that Mayor Saunderson sloughed off his mayoral responsibilities and his oath of office last January to announce he wanted a better-paying job at Queen’s Park, and since then has practiced the art of flaccidity in office).

And underneath that discussion broils the political ambitions of Councillor Kathy Jeffrey (and, of course as we expect, none of this was covered by local media).

Jeffrey balked, and at 0:47:52 said she wanted to raise the issue of the appointments behind closed doors (so much for the promises of openness and transparency!) so she could make comments “specific to individuals.” The knives (or the claws) will come out when they’re in camera, but you can bet your bodkin they’ll be sharpened against the contenders.

She also said she didn’t think “we really need to deal with the alternate at county” which is curious, given she is aware that the Great Leader will be pursuing his own ambition and likely take a real “leave of absence” (as opposed to the leadership leave he took in January) in early 2022. Any alternative candidate would be able to use the time before then the learn about how the county operates, its budget, committee structures, etc. (and don’t forget our DM also sits on county committees!). To wait until Saunderson buggers off (yes, we know he’s been MIA from any actual leadership roles these past three years but he still takes the paycheque and consumes space in town hall) will disadvantage any replacements.*

Unlike a councillor, the deputy mayor’s position has some special attributes, including our second representative on Simcoe County Council, plus he acts as the alternate to the Mayor for the Emergency Management Plan, and is an official town signatory (i.e. one of the people who sign cheques, bylaws, and other official documents). On top of that, the current DM is also a BIA director and sits on the Affordable Housing Task Force.

The next person in line, based solely on the number of votes received — and not on their commitment to the community let alone their congenial nature — is Councillor Marianne “Besmirched” McLeod (best known for her “let them eat cake” bromides). But, apparently, the county requires a backup plan for the backup. As the staff report notes:

Collingwood By-law 2018-094 provides that the Councillor with the highest votes in the municipal election is the alternate County Council member. In discussions with the County, the County is considerate of the circumstances and agreed if the alternate is designated the authority of the Deputy Mayor for the purposes of County Council, Council could elect another member as the alternate.

So the recommended alternative to the first alternative (just in case McLeod is unwilling or unable to fill that role) is the next-highest votes: Councillor Tina Comi. Staff recommended the following (emphasis added):

And if a council seat becomes vacant (as might happen if neither Hull nor Saunderson return to their seats), then council will advertise to see if anyone in the public is interested in filling that role until the upcoming municipal election. At 00:48:10, McLeod refers to the public as “civilians who may be interested” as if she is a member of a military junta. An interesting perspective on how she views both herself and the residents. And at 00:48:50 she just has to make sure the public knows she is the “highest vote-getter” among her council peers.

And at 00:49?:10, she too, comments she wants to say “a couple of things” behind closed doors, which I suspect in her role as “Saunderson’s Harridan,” will also be aimed at Coun. Comi. Character assassination, it seems, is best played out away from public scrutiny.

(At 00:49:30 Coun. Doherty makes the salient point that there is too often a “disconnect” between municipal and county governance — although she doesn’t blame the mayor and deputy mayor for being poor communicators about their county roles, the inference is there — and says participating at county council is a “good thing for all of council.” I agree: too often our county reps vote and act according to their own views, not in accordance with what is best for the town.)

Jeffrey has long been rumoured to be planning another run at the mayor’s seat and having staff recommend others to fill in for the DM must have rankled. I expect she wanted the role for herself, as a stepping stone for her rumoured next mayoral bid, in 2022. The recommendation of Councillor Comi, the only one at the table who doesn’t pay obeisance to The Great Leader and bow to his every whim, must have really rankled. I suspect any in-camera comments about Comi will be replete with venom.

(And as expected, what Coun. Berman has to say on this or any other important issue on the agenda is… nothing at all… probably a good thing…)

Further, I am flabbergasted that any council that even pretended to engage the local business community even in the slightest would allow the clerk to sit on the BIA instead of an elected representative. Given that the BIA is sometimes at loggerheads with town staff over issues such as parking, events, and policing, it seems wildly inappropriate to give the role to a staff person rather than an accountable, elected representative.

You might recall that last term, Council abandoned the downtown by refusing to appoint a council representative to the BIA board, making Collingwood the only BIA board in Ontario without an elected representative on it. This prevented downtown issues from getting public visibility at the council table, and for the next two years, council ignored the frequent BIA’s requests for a council rep, not appointing one until 2017, three years after the election.

And now they want to turn over that responsibility to a staff person, disengaging the BIA from the political process again, and putting Collingwood’s BIA back into the have-not status of having a political appointee working with it. Gobsmacking.

Similarly, the report recommends no one replace Hull on the Affordable Housing Task Force, which shows how important affordable housing really is to this council. because affordable housing is actually the county’s jurisdiction, it made sense to have the deputy mayor sit on that board so he could be a direct link between the committee and the powers that control the funds. But now the town wants to sever that link, and set the committee adrift.

And no one in the meeting could be bothered to address the lack of representation on the BIA or the Affordable Housing TF, a clear sign that none of them give a damn about either. Hardly surprising, since giving a damn about the community was never on their agenda.

The recommendations for both these vacancies further illustrate the arrogant distance council and staff continue to create between governance and the public (see my previous posts on the still-broken, resident-hostile committee system).

* One of the names rumoured as being brought forward as “interim mayor” while Saunderson buggers off to pursue his personal ambition is a former mayor,  longtime Saunderson supporter, and Saunderson’s “mentor” for the past two municipal elections. I cannot imagine the public would be happy with such a crude patronage appointment.

PS. This piece was written in early Dec. 2021, and originally published that month. However, it was deleted in late December when my abysmally bad host server, Godaddy, broke my blog through technical incompetence. I am in the process of trying to restore as many lost posts as possible. My apologies to subscribers who received and read this piece previously.