What is propaganda? The word gets thrown around easily by people who obviously mean “anything we dislike or don’t agree with.” It’s a pejorative often used by a small group to describe anything official that any level of government puts out, no matter how benign or factual. Libertarians, for example, often grouse that government information about, say the efficacy of flu shots or the safety of fluoridated water, is “propaganda.”*

Ironically, many of these individuals and groups then turn around and create their own pieces, blogs and websites to counter these government’s declarations, and aggressively spread them through the internet and social media while decrying the government’s documents as “propaganda.” Pot calling the kettle black, eh?

Propaganda is a form of communication that is aimed towards influencing the attitude of a community toward some cause or position by presenting only one side of an argument. Propaganda is usually repeated and dispersed over a wide variety of media in order to create the chosen result in audience attitudes.

I usually find Wikipedia a reasonably valid source of information, albeit one that has to be weighed in the balance most times, and I think its description here is a tad weak. It needs enhancement.

In their excellent book, PR: A Persuasive Industry? (Palgrave Macmillan, New York, USA, 2008), authors Trevor Morris and Simon Goldsworthy dedicate the whole of chapter seven to wrestling with a definition that differentiates between public relations and propaganda, and to explain the mechanics of each. While recognizing some of the similarities between the two (and their common origins), they write,

“…there is no real moral distinction: both practices are essentially amoral, capable of serving any cause. However, there are some practical differences. The ubiquity of propaganda as a term arises from the fact that it does not just describe a debating technique or a particular mode of persuasion such as media relations. Instead… it is all-encompassing. Thus propaganda is perhaps best seen as an orchestra of persuasion. Propagandists exploit all possibilities for influencing human thought and action.”

Two key phrases appear in their description: ubiquity and all-encompassing. Morris and Goldsworthy underscore the “sheer scope and scale of the levers available to the propagandist…” in their chapter. They conclude by laying out three distinct ways in public relations is different from propaganda:

To believe any small town bureaucracy and government has such power and control, is somewhat delusional. Censorship? Would the local papers or radio stations stand for that? You’d have to believe that town hall gives them their orders on what to print or broadcast.

But there are always conspiracy theorists in every community who see dark shapes in the shadows, where the rest of us just see the chiaroscuro (honest, we’re not building secret mushroom farms in the terminals…).

The word propaganda means “to disseminate” or “to propagate.” In 1622, the Catholic Church created the “Congregatio de Propaganda Fide” (Congregation for Propagating the Faith), which actively and aggressively spread Catholicism in non-Catholic countries.**

In short order, this was shorted to simply being known by the Italian word for dissemination, “Propaganda.” Catholics associated the word with spreading the truth (their truth, of course). Protestants, however, didn’t share their view and associated it with spreading lies. By the 1790s, the word had migrated from religious use to secular activities.

Political propaganda (PP) as a national, government activity played a major role in the Protestant Reformation, and then in the 18th century Revolutionary War between the US and Britain. It played a major role in the Revolution in France and Napoleon subsequently used PP to justify his actions and rule. PP was used in the American “Indian wars” and Civil War of the 19th century. 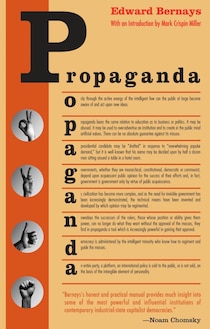 Propaganda really came into its own in the early 20th century. Governments on both sides of WWI ran agencies or departments dedicated to propaganda. One of the American practitioners, Edward Bernays, was schooled in its art, and took his skills into the private sector after the war, when he applied psychology to public relations to become the “father of modern PR.” From the early 1920s, PR became a discipline that used psychology and sociology and mass media. Propaganda followed apace.

The Soviets and Nazis were masters at propaganda (and reputation laundering). They both used every tool and technique at their disposal to develop widespread and ubiquitous propaganda. Mao Tse Tung’s Communists would learn from them and take propaganda even further during the Cultural Revolution. Today several nations live under a constant barrage of state propaganda that reaches through all media, culture, faith, government, recreation and business – Iran, North Korea, Myanmar, Tibet among them (Tibet being the subject of Chinese propaganda, of course, not the originator).

Generally no nation is free of some form of government propaganda. However, as Morris and Goldsworthy note, it’s amoral – it is neither good nor bad. It just is. Encouraging flu shots, rabies shots for pets, recycling, and not smoking are propaganda, too. It takes a fairly high level of authority and a lot of money to produce anything effective or widespread, and it isn’t always self-serving.

Every government also practices public relations (sometimes called public affairs, although there is a disagreement over whether PA and PR and the same), which is usually focused on single issues, rather than trying to sustain or create a particular national culture and mindset.

Spin is inherent in propaganda, but is not necessarily present in PR. Of course, PR frames the discussion in the most beneficial light, but this is not always spin. Spin is defined as presenting only the favourable side of the argument and deprecating the unfavourable.

A single flyer – Collingwood Councils’ Half Time flyer – is not propaganda, merely public relations.Some people complain that council doesn’t communicate with the public, others complain when it does.

Nor is it “blatant campaigning at the tax payers’ expense” as one person complained. Since municipal politics are non-partisan (at least in such small urban centres like Collingwood, and despite the overt partisanship of at least one previous mayor), it would not be a very effective campaign tool, since every member of council is listed and pictured, and no individual gets any credit for the accomplishments of the group. Not to mention that not a single one of us can legally declare our candidacy for council until January 1, 2014.

It cannot be called “spin” either, because it did not crow over council’s accomplishments aside from its teamwork, and does not deprecate anything. The inside merely listed what had been achieved for the greater good of the community. It was not “biased and misrepresentative,” simply a list of things council has initiated, passed, or accomplished. It is unclear how, say, approving a new fire station, reducing the debt, keeping taxes at a 0% increase, or resolving the patio issue satisfactorily can be misrepresented this way. I suspect that anything this council did would be objectionable to some people.

Simply because someone doesn’t like a council decision, listing it as an accomplishment for the greater good is a far distance from propaganda. So if we’re going to have a civil discussion about any council activity, we must first lose the emotionally-laden and wildly inaccurate vocabulary, and stick to the facts.***

* In a similar manner, the politically naive uber-right of the USA labelled Barack Obama a “socialist” during the election, which merely showed they were ill-educated in the actual meaning of the term. It would have been as meaningful to call him an Aspidistra, which they might have done, if they could have spelled it.

** Propaganda via mass media can be traced back to Pope Sixtus, who used the new printing press of the late 15th century to attack the Medicis.

*** And stop calling every council decision you didn’t understand or appreciate “hypocritical.” If you truly wanted to understand or debate a decision, you could call or email any member of council and ask for an explanation, instead of whinging in the media about how it baffled and angered you.