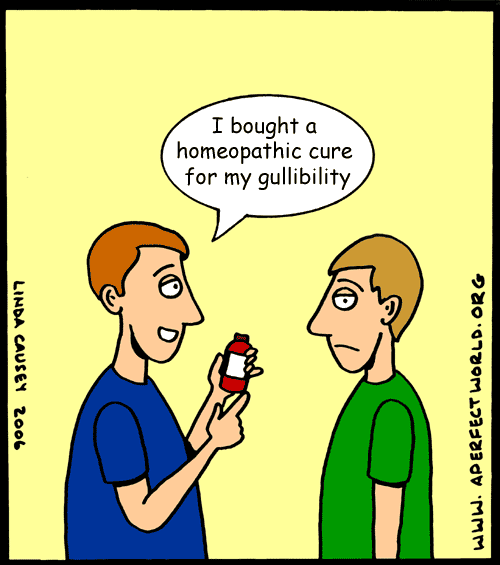 Homeopathic products often make a lot of outrageous claims. Given that these products are just water, or sometimes water and sugar, anyone with a gnat’s worth of common sense doesn’t believe those claims. Nor are they backed by any evidence. It’s no wonder homeopathy is called the “air guitar of medicine:”

It should not be a shock to learn that homeopathy has no basis in scientific fact – should anyone doubt this I invite them to peruse Edzard Ernst’s systematic review of the practice.
Homeopaths have gone to incredible lengths to avoid having their air guitar of medicine tested in any rigorous fashion. Instead, they have created their own self-justifying means of establishing that it works. They call this “homeopathic proving”.
A “proving” typically involves a dozen people, who will take a homeopathic remedy and record their thoughts, feelings and even dreams. These diaries are then used to “discover” what the remedy can supposedly cure.

Collectively they failed to provide strong evidence in favour of homeopathy. In particular, there was no condition which responds convincingly better to homeopathic treatment than to placebo or other control interventions.

Ernst’s study reviewed 225 research papers, 11 independent studies and 1,800 medical studies on the health effects of homeopathy and found no reliable evidence in them to back its homeopathy’s claims of effectiveness. It didn’t work any better than any other placebo. In fact, the study concluded, “homeopathy should not be used to treat health conditions that are serious or could become serious.”

In simple terms: homeopathy is bunkum and don’t use it if you’re sick. It doesn’t work. It can’t work because it is not based on science, not on research, not on medical principles, not on chemistry or biology. It is based on magic and superstition.

That’s what you get when you buy a homeopathic product: magical pills.

But in any nation connected to the internet there are enough gullible folks that homeopathy manages to fool someone. Like alien abductions, 9/11 conspiracies, feng shui, acupuncture, crystal therapy, psychic surgery, angels, bigfoot, chemtrails, gluten-free fads, detox fads and other wacky notions and conspiracies, homeopathy has a ready audience of people willing to open their wallets, and close their minds.

As a writer noted in The Herald, it’s hard to combat superstition with science:

Many preventable deaths and serious illnesses have been caused by the use of homeopathy over real medicine. And qualified, caring, medical experts worldwide are at their wits ends trying to counter the hype and nonsense spread by many in the homeopathy business who are trying to increase the huge profits they make out of their sugar and water pills.

That’s what it’s really all about: that huge profit. Scamming the public out of its money.

The most ridiculous claim by homeopaths is that the weaker they dilute their solutions, the stronger and more effective they get. So they dilute them to the point where they contain not a single molecule of the material they first started with. They’re just water. Magic water, of course.

As it says on the Science-Based Medicine site:

The law of infinitesimal doses was actually a late development by Hahnemann, but today is often thought of as the primary characteristic of homeopathy. This law states that when drugs are diluted in either water or alcohol, they actually increase in therapeutic potency. Today, serial dilutions of 1:100 repeated 6 or 30 times are commonly used. Between each dilution the substance is violently shaken, which is thought to be necessary to activate the properties of the drug…
The principles of homeopathy run contrary to modern science and have never been empirically established… The so-called law of similars, for example, is little more than an ancient and common superstition known as sympathetic magic — that things have an essence or essential quality that can be transferred. There is no scientific knowledge about biology or chemistry to support the notion that a small dose of a drug or substance will necessarily cause the symptoms it treats at higher doses.

The law of  infinitesimal doses also runs contrary to chemistry, pharmacology, and thermodynamics. Homeopaths today use dilutions of substances which essentially remove all traces of the substance from the final dilution. There is not likely to be even a single molecule of the original drug in the final remedy which is given to the patient. Homeopaths conclude from this fact that the substance is transferring its essence to the water into which it is diluted. The more it is diluted, the more potent is the water. They offer, however, no possible explanation for how simple water molecules can contain the essence of far more complex substances.

Homeopathy is bullshit. It might be excused in the 18th century, when it was invented by a German physician, for the same reason we today excuse beliefs in the humours, bloodletting, blistering and evil spirits. All of which were common in Samuel Hahnemann’s day, when the rudiments of medicine, chemistry and biology were barely being discovered. But we cannot excuse such beliefs today as anything more than willful, superstitious ignorance.

I’ve written about this pseudoscience scam and its gullible audience several times in the past two years, but it continues to vex me. Homeopathy is a scam that preys on the intellectually weak. Instead of putting their money and faith into real medicine, its adherents waste money and effort on snake oil that has no medicinal value. Like the anti-vaxxers, they willingly risk illness, injury and even death to support their ludicrous beliefs.

As Stephen Law wrote in his book Believing Bullshit: “…homeopathy is an intellectual black hole.” (page 12).

Homeopathy is simply selling magic water. If you believe in it, you believe water remembers whatever was in it. Consider that when you next flush your toilet. What you flush is what you consume in every homepathic concoction: feces are what the water will remember. So saying homeopathy is bullshit is only partially true: it’s human shit, too.

This week, the US Federal Trade Commission decided to put homeopathy’s metaphorical feet to the fire. Despite all the unproven and ludicrous claims for cures on homeopathic products, the FTC said it wanted proof for those claims. It will host a workshop on homeopathic advertising, Sept. 21.

As the Lexology blog notes;

So what does this mean in non-legalese? Basically that the FTC thinks those claims are bunk and that those people who sell the magic water have to prove their claims or remove them. Which is, most sane folks think, about bloody time.

That workshop will consider (my comments are in parentheses):

Here in Canada, there were over 10,000 products approved to sit on the shelf beside real medicine. Few if any of which have any science or study to back their claims. Some of these use the word “natural” which is about as meaningful in medical terms as calling them happy or collegial or vibrant. Yet Health Canada lets them be sold without any evidence to support their claims. Homeopathic products are in this category. They are all snake oil.

Worse, the University of Toronto is prepared to offer a degree in pseudoscience, which will entirely discredit the university to the level of some creationist school. Why would a previously renowned institute of higher education offer claptrap? Bowing to lobbyist pressure. If the U of T does this, you can expect degrees in iridology, astrology, tarot card reading and crystal therapy next.

The Committee for Skeptical Inquiry recently called it “marketing deception” to offer courses in pseudoscience and quackery, writing on its website:

Universities in particular are supposed to be the exemplars of scholarship and intellectual legitimacy. People believe universities are intellectual leaders, not followers, and they are correct (or at least, they should be). Teach­ing a topic in a university is absolutely an endorsement of the legitimacy of that topic. We can distinguish between teaching about something and teaching the thing itself. It is okay to teach about so-called complementary and alternative medicine (CAM) as a sociological phenomenon or even as an example of pseudoscience. Practi­tioners also need to learn about any method their patients may be using or about which they are curious. Credu­lously teaching CAM, however, is an endorsement, the granting of the imprimatur of the university.

The University of Toronto Students’ Union is on the superstition bandwagon, too. A recent story in The Varsity notes the UTSU is adding homeopathic products to its insurance, up to $600 per student. That could be a potential $24 million paid to quacks! As the article’s author opens:

Imagine for a moment, that a new pill that is claimed to be able to treat all sorts of common medical ailments hits the market. The only measurably significant contents of this magic pill are sugar, water, and the inactive additives used to bind the tablet together. In terms of evidence supporting the effectiveness of this product, hundreds of scientific studies have determined that this pill is not effective for the treatment of any medical condition. In fact, multiple governments worldwide have even warned their citizens that this pill should not be used to treat health conditions.
Now imagine that the University of Toronto Student Union (UTSU) has decided to use your money to pay for this useless pill, under its student health insurance plan. Outrageous and far-fetched, right? Not so fast.

So along with the degree in quackery to be offered, this really puts the U of T on the downward side of the intellectual mountain. No longer a school of higher learning, it slides into a institution of magic and superstition. It should be renamed Harry Potter U…

Let’s say it again, this time in harmony: homeopathy is bullshit. It is quackery, snake oil and pseudoscience. It is a sham and a con. No degree, no insurance payment will make it not so.