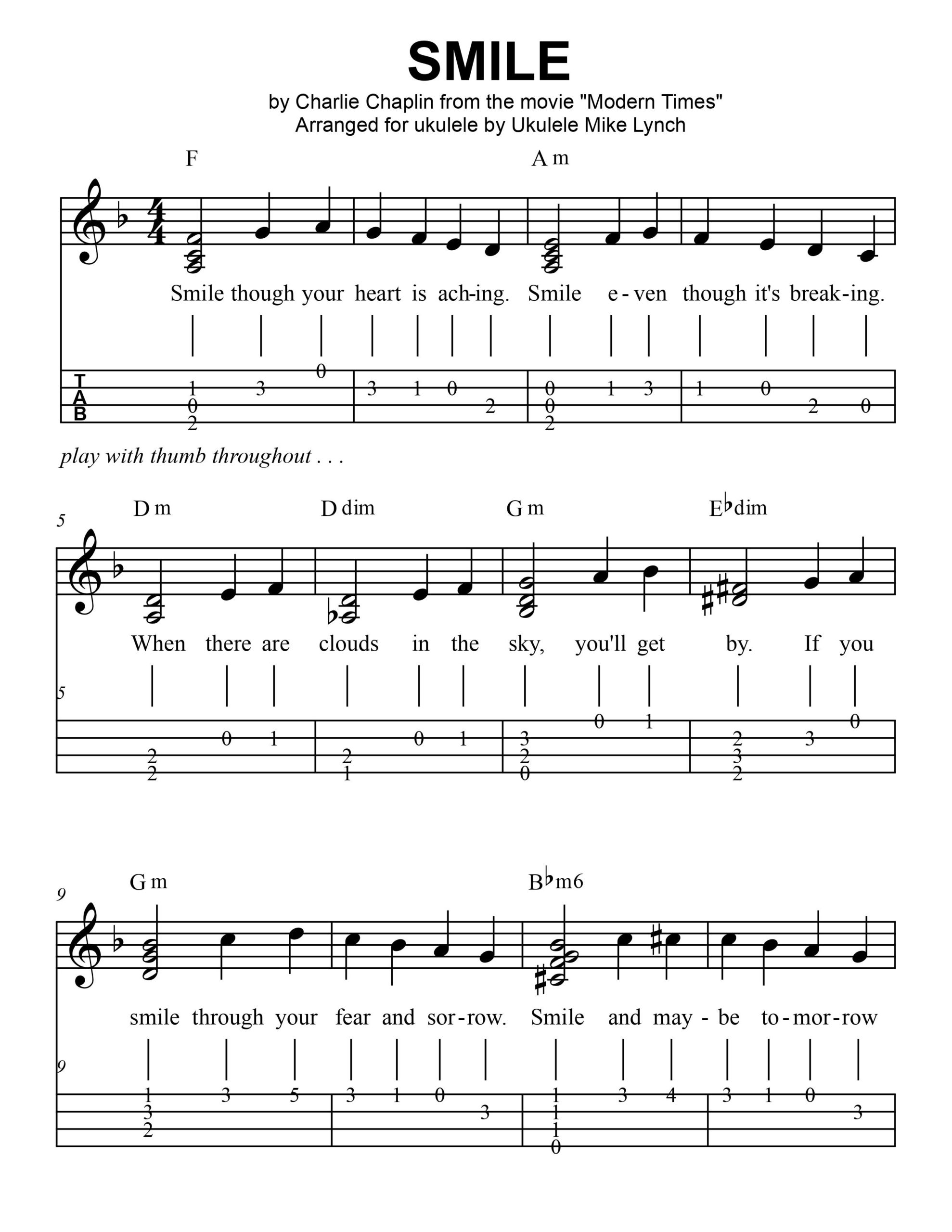 One of the things I want to discuss in my upcoming ukulele workshop is how to read tab sheet music. In this post I’ve give you some pointers so you can practice on your own. It’s worth learning to read tabs because it gives you the ability to play melodies and solo pieces without having to read music.

Don’t be confused when you see a piece labelled “tab” but only showing the lyrics and chords. The name is often used for that purpose, although it’s not really a tab in the proper sense.

First you’ll need a properly tabbed song to work with. For this exercise, I’m going to use Charlie Chaplin’s song Smile, tabbed for ukulele by Mike Lynch. you can click on the image of page one at the upper right and download the PDF from his site. Mike offers a number of ebooks for sale on his site, as well as online ukulele lessons. This lovely piece is from his Ukulele Solo Instrumentals book, a collection of 52 songs. He also has two chord-melody books. I’ll discuss chord melody techniques in another post, but what you learn here works with them, too.

Mike’s tabs are more comprehensive than some: he includes both the music staff and the tab, below, plus the words. Not all arrangers include the actual music. You can also see the chord names above the staff. Mike links the music notes on the staff with the string/frets on the tab with a vertical line – this can be helpful if you’re trying to learn to read music.

Let’s take a look at some of the parts of this song. First the start:

The first chord, shown above the staff, is F. Quite often the first chord is also the song’s key, as it is here. The F chord on the ukulele looks like the diagram on the right. This is also written out as 2010 which identifies the strings and frets, reading from the fourth string (leftmost) to the first.

2010 means: put a finger on the second fret of the fourth string, and another on the first fret of the second string, and play the other two strings open (0). These are the notes A-C-F-A, reading left to right (fourth to first strings). For those of us with re-entrant tuning (high G), the A on the fourth string is actually an octave too high for the note shown in the staff.

If a string should be dampened or not played, it is usually marked with an X. Now turn that diagram 90 degrees counterclockwise and you’ll see how tabs work.

In the tab line at the bottom, Mike shows 201. Tabs read from the lowest (fourth or G) string on the bottom to the first at the top (A). For soprano, concert and tenor ukes, these four strings are G-C-E-A respectively.

The numbers represent the frets where you place a finger on that string. So 201 as shown is an F chord played without the first (A) string. Since 201 translates to the notes A-C-F, it is a full F chord, although inverted, with the F at the top, not the bottom. But in tabs you don’t play the notes not shown, so don’t play it as 2010 – just as 201x.

Reading from left to right you see the numbers 3-0-3 on the top two lines. This means play the third fret on the second (E) string then the first (A) string open, then the third of the second again. Let’s look at another section: 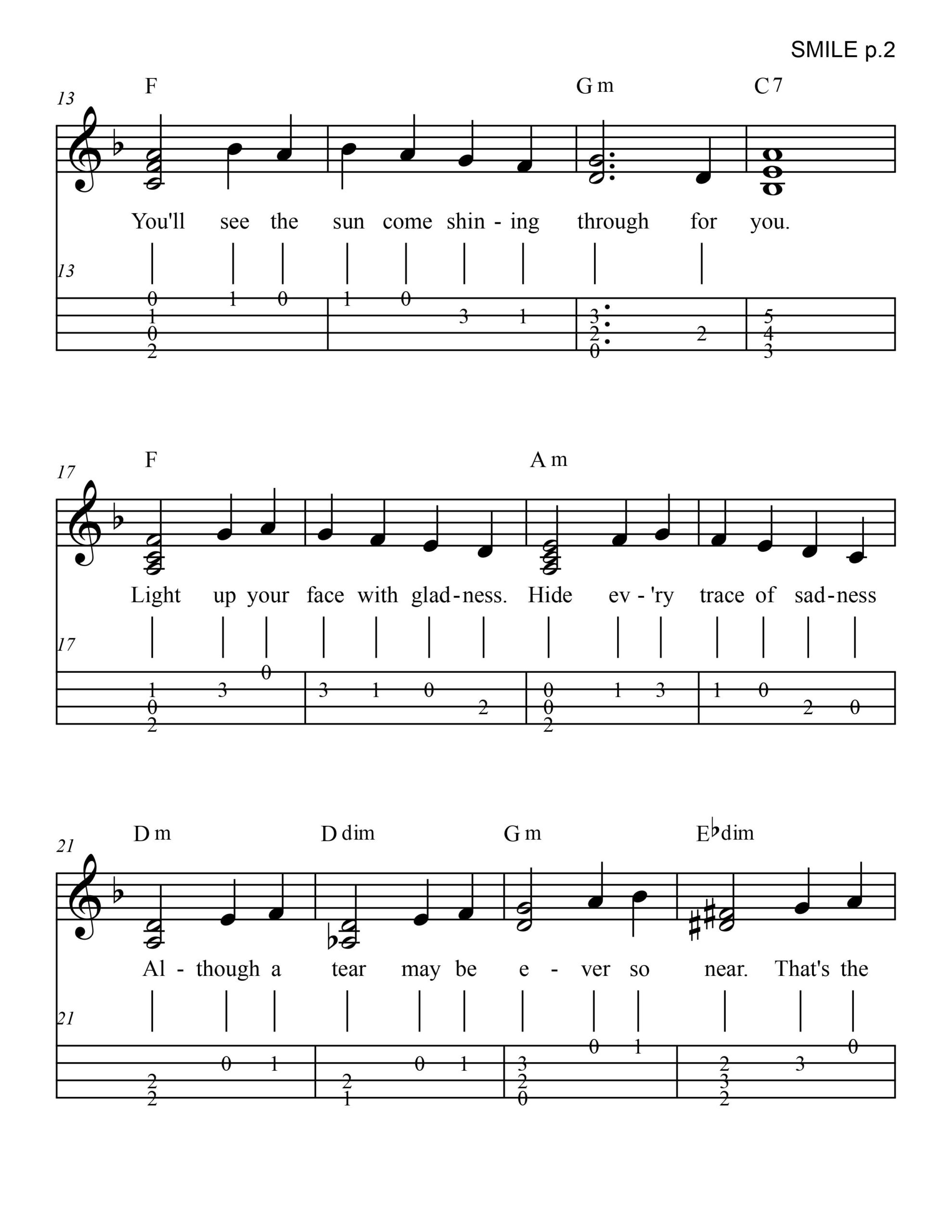 Again you see the chord at the top: Bbm6. As you can see in the tab line, this is played as the full chord 0111 (open fourth string and barre across the first to third strings on the first fret). The hashtag signs (#) in the staff mean the note is played ‘natural’ – without sharps or flats, but this doesn’t matter to the tab since the exact position on the fretboard is shown. 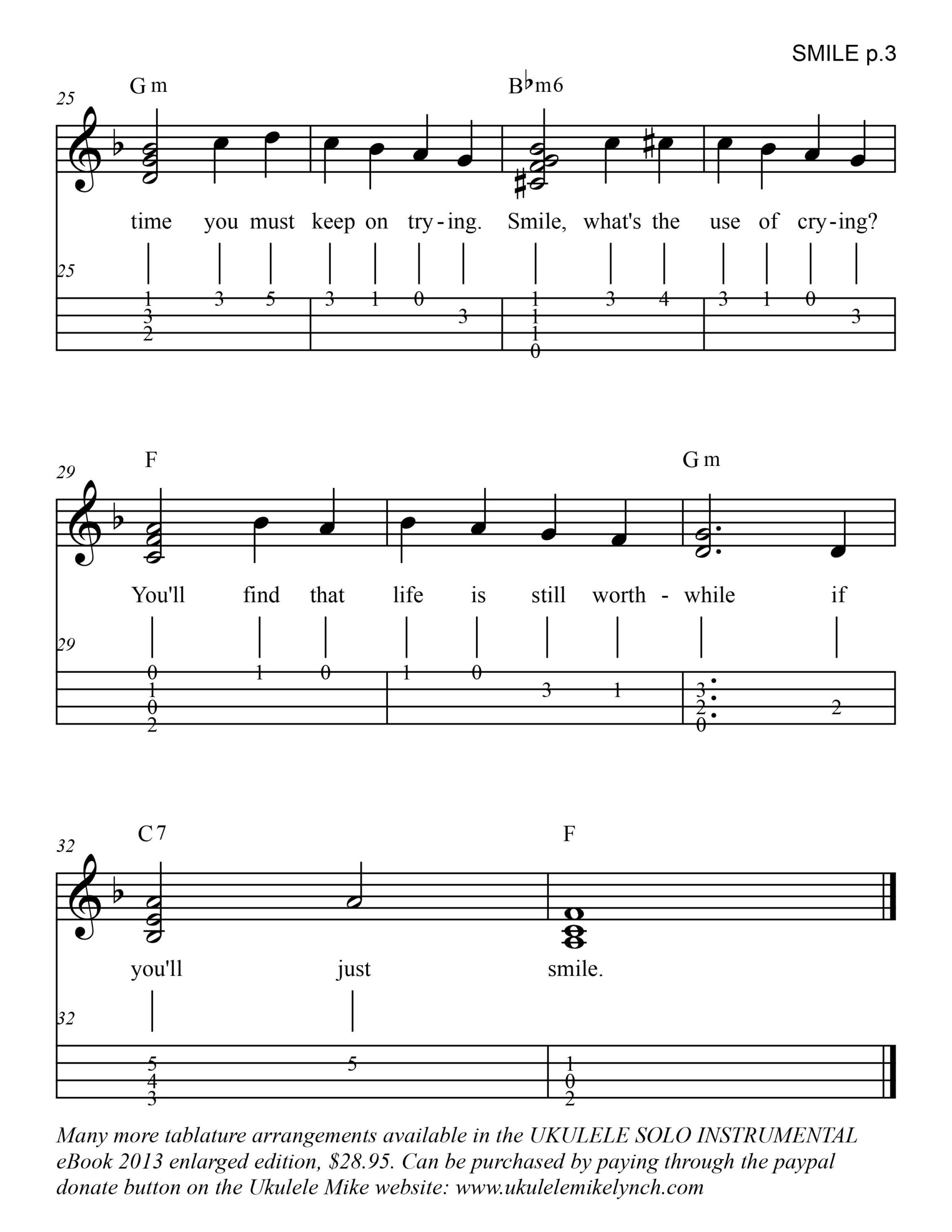 Again you see the chord is G minor which would be 0231 on a ukulele (GDGA#), but when playing the melody solo, you only play the lower three strings (023 or GDG)). Note that in the staff, Mike also only shows the D and G notes, not the A#.

The dots indicate a slightly extended duration – hold those notes a little longer. 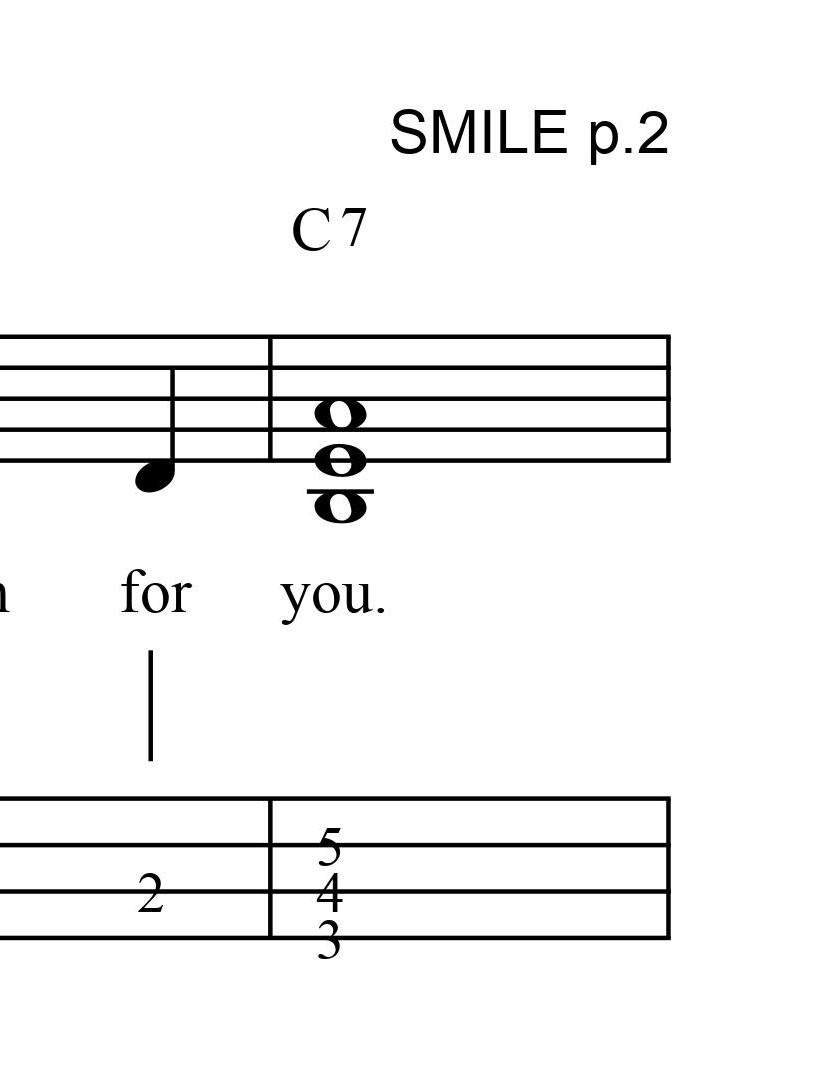 And the last section to examine: 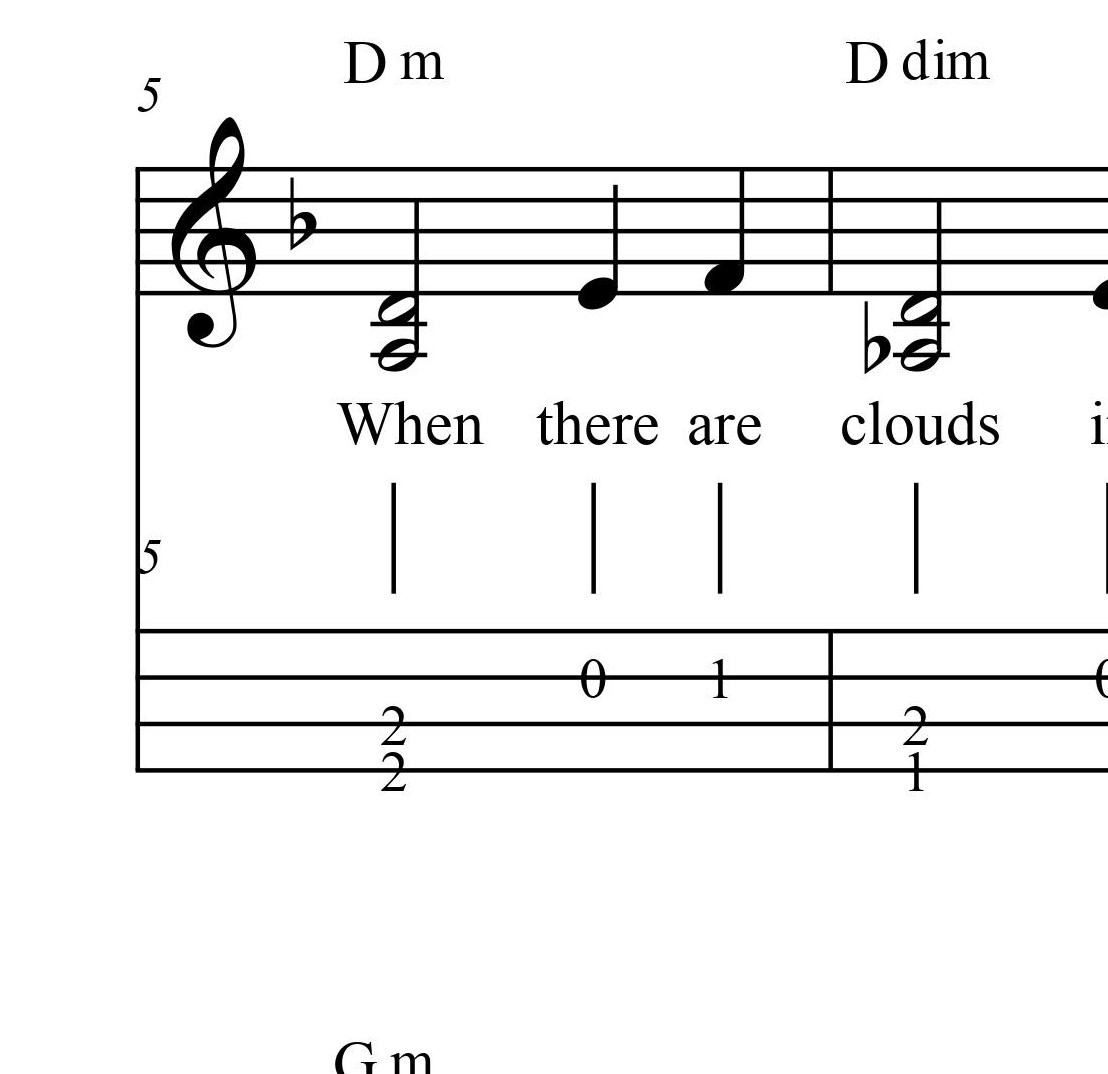 On page 1 you see the truncated chord: Dm is tabbed as 22xx when the chord diagram shows it as 2210. And Ddim7 is 1212 but appears here as 12xx. Mike is doing this so the extra notes in the full chord don’t confuse the melody. If someone is playing along with this by strumming the chords, they can play the full chord pattern.

The numbers above the staff and tab lines are the bar count (the numbered bar starts below).

You can download a different tab of this song here – this time done in the key of C. The author of that tab writes about it on his blog here. It’s a good exercise to try both and see how the arrangements differ. You can even read a chord version (in C) here.