In the 1930s, the Soviet dictator Josef Stalin removed his political rivals and enemies from history. Literally: he had their images brushed out of photographs, their names removed from books. Those he didn’t like simply disappeared from public notice. Kim Jong Un and Mao Tse Tung similarly erased their opponents. And now our own mayor wants to follow the example set by these dictators.

But while photos were Stalin’s weapons in his purge, bronze plaques are Saunderson’s.

You can read about the latest Stalinist purge in the CAO’s report for the upcoming Strategic Initiatives Committee, May 3. The 20-page report* on the Saunderson Vindictive Judicial Inquiry (aka the SVJI) includes several recommendations that can at best be described as mean, spiteful, vindictive, and very, very petty. Stalinist to the core. Or is that called cancel culture these days?

On page 12, it recommends removing the bronze plaques from the recreational facilities that were placed there at the opening of these facilities in 2013. These, as all such town plaques do, list the name of the mayor and all members of council of the day, and the opening date of the facility. But the CAO report recommends erasing our history:

Council provide direction to staff to remove and replace the existing plaques located at the respective facilities and replace with a new plaque as recommended.

This is a strikingly Stalinist and unprecedented attempt to erase local history. It would be beneath the dignity of any other elected representatives in a democracy to even contemplate such pettiness. But simply because the 2010-14 council refused to give the YMCA a $35 million handout as Saunderson’s committee wanted, he will now oversee the removal of all their names from the town record. We will be expunged, unpersons, erased like Yezhov in the photograph above. Soon only our Great Leader’s name will be allowed to grace public places.

And, of course, it will cost taxpayers more money to replace them. And you know how this council LOVES to lavish your money on the SVJI, even 18 months after it closed. What’s $10 million when you can still exact vengeance on people?

It’s hard to express my disgust over the immaturity and pettiness of this recommendation. But I have no doubt our council will eagerly approve it. Yet, it gets worse. The Stalinist purge isn’t over and the politburo isn’t through erasing local history. 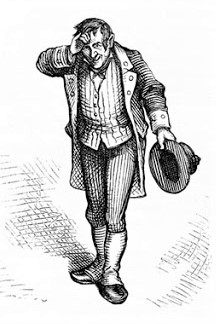 Those awards were given for long-time, even lifetime service to the community. Now if you’re one of our Great Leader’s political enemies, or maybe just someone who didn’t tug their forelock when he walked by, your award is threatened to be revoked. All your good deeds, all your efforts on behalf of the people here will be erased. You, too, can be un-personed by Mayor Saunderson and his politburo.

Of course, no one named in the SVJI has been charged with anything illegal, let alone been found guilty in a court — even though the OPP has been investigating the events since 2014. And who decides what is or isn’t ethical? Apparently, that task will fall to Mayor Saunderson and his sycophants.**

Keep in mind that Saunderson remains in office while he job-hunts for a better-paying job as MPP in Toronto. The honourable and ethical thing for him to do would be to resign from a job he couldn’t commit even a half a term to. But no, he stays on, taking the public’s paycheque even though he is keen to shed his mayoral responsibilities and get out of town. And don’t forget the potential for egregious conflicts and influence-peddling accusations over exceptions to his interim control bylaw (ICBL) while he remains in office.

And this guy will determine the ethics and morality of others? That’s ironic. It would be farcical, if not tragic. Who would have thought that this town would descend to Stalinist cancel-culture tactics like this?

What comes next? Removing microfilm of local newspapers from the library because they contain articles about the council of 2010-14? Airbrushing museum photos that show the members of council at official functions? Removing the photograph of Mayor Cooper from public display in town hall? Digitally trashing from the town’s website all agendas and minutes of meetings from that council so their names are not recorded? Those plaques are the first step to a full purge.

And to make it even more puerile, on page 9 of the CAO’s report, we learn council is still trying to figure out how to sue people who have never been charged with anything, much less found guilty in a court. Page 17 even acknowledges “the Treasurer/Director of Finance has not identified fraud.” With no laws broken (not even the Municipal Conflict of Interest Act!), and no fraud identified,  this continued obsession to punish people is proven merely a personal witch hunt.

Legality doesn’t matter where spite and vengeance are concerned, however: this SVJI-obsessed council will, as usual, scurry behind closed doors next Monday to consider hiring a “forensic auditor” at taxpayers’ expense to go through the same records the inquiry staff, the town’s legal counsel, and the OPP examined. Just in case, you know, the highly-paid professionals might have missed something that a bureaucrat or clerk might uncover. And will this be just another sole-sourced contract handed out to friends or business relations?

Those professionals, by the way, included the “Kroll Consulting Forensic Audit Service” for which we already paid $302,208.62 (see page 15). Surely it will cost taxpayers at least this much to do it again. How many times are taxpayers going to pay to do the same thing others have already done? I suppose only when Saunderson leaves office.

All of this will add to the already-stratospheric costs of the SVJI. Never mind fixing our roads and sidewalks, never mind providing support for people and businesses affected by the pandemic lockdowns. Let’s throw taxpayers’ money at more lawyers (emphasis added);

These are not the considerations of a mature body of representatives. They are the machinations of puerile bullies obsessed with exacting vengeance at any cost. As long as the cost is to the taxpayers, of course.

Having failed to convince the public his SVJI was worthwhile, and barely received a lukewarm acceptance from his peers at county council for a mere 5% of the SVJI’s recommendation, Saunderson must be in a foul mood. No one seems to take his crowning achievement seriously. Residents seem more concerned over the waste of $10 million of their taxes than on the 306 mostly irrelevant or redundant recommendations it contained.

Many of the events the SVJI covered are already 10 years old. Maybe people simply want him and our council to stop obsessing with the past and deal with the pressing issues of today. Like the pandemic and its effects on local businesses and workers. Or the water system they ignored for six years. But it seems he can’t stop obsessing. And so, he follows Stalin’s example to erase his opponents from local history.

It’s impossible not to see this as a petty vendetta that has consumed our mayor since 2012, and most of our council since 2014. Since then, council has devolved from a governing body into a politburo of yes-people eager to do our Great Leader’s bidding and punish those who thwarted his ambitions way back then. They cannot move forward under his rule.

Every time you think this mayor and council can’t sink any lower, they set the bar down another notch.

* This is but the latest in what seems a never-ending series of reports-on-the-report, all apparently as important as clean drinking water. But wait, our water service was so unimportant that council dropped the ball for the past six years and now we’re told it’s in crisis. So dire is their mishandling of it that this council had to kill all new construction and refuse to provide building permits for the next one-to-four years. Council ignored our water issue, the renewal of the pipeline contract, and pretty much everything else so it could focus all of its attention on the mayor’s vendetta.

Yes, I know the CAO wrote the report, but the mayor sets the agenda and approves everything in it before it gets published. He discusses the content with the CAO first. The CAO is merely acting as his megaphone in this report. Saunderson’s fingerprints are all over this.