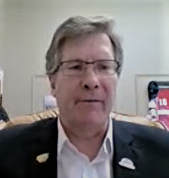 A recent email from Brian Saunderson’s campaign to get out of his mayoral responsibilities* and get a better-paying job at Queen’s Park offers a chance for readers to “win” 15 minutes of time with The Great Leader. Ooh, I can see you’re wet with excitement. Control yourself.

It’s not face-to-face with him, mind you, because Great Leaders like Brian don’t like to soil themselves with the physical company of Little Folk. That would be demeaning. Besides, you might be contagious or insufficiently obsequious. No; it’s only virtual time you will “win”:

Anyone who completes the survey by February 28 will be entered into a draw to be one of three (3) people to have a chance to meet with me virtually for 15 minutes to discuss your issues and ideas.

And for a whole 15 minutes! Swoon! but wait: is that three winners, or three who will get a “chance” to meet and only one will emerge victorious, sort of like Brian’s own little Squid Game? And what are the odds of success in that “chance”? Does Brian roll dice to choose the winner? Like most of his pronouncements, it’s ambiguous.

All you have to do to qualify is to fill out his survey which, apparently, is designed so he can take any of your ideas he deems worthy and sell back to you on the campaign trail:

I will be reviewing the results personally.  With my team, I will use them to adjust and improve my platform to best represent your interests and those of this important riding.  In March, I will be sharing our insights.  I am committed to keeping you informed on the issues that will be important to focus on in the coming Spring Provincial election. 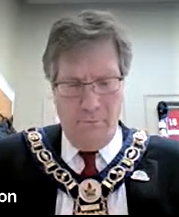 I guess that saves him and his campaign team from having to come up with something original on their own.** As if the party would actually allow him to run on a home-grown platform that wasn’t tightly scripted at party HQ. But the conceit that he might have even a shadow of independence in his platform, or even care what any constituent has to say, is très amusant.

The prospect of 15 minutes with The Great Leader in his full Zoom-ish glory must surely make party members who didn’t choose Saunderson as their candidate (because he was foisted on them by Doug Ford when it was apparent Saunderson would lose the local riding nomination) so excited they can hardly contain themselves. After all, who wouldn’t want 15 minutes with a guy who can’t win his own battles and had to resort to undemocratic means and outsiders to beat his opponent?

I’d ask those difficult questions our flaccid local media won’t ask him, not that they’d be likely to publish any factual answer that embarrasses their friend.

Maybe he will lighten the virtual meeting’s mood by reading one of his self-serving, run-on motions aimed at hurting someone who now lives outside the community. or he might read the excessively long declaration that he opens every council meeting with. Or he could regale his audience with his oft-repeated story about how he’s still taking out his revenge on people who bruised his ego back in 2012.

I’m sure Brian’s wooden delivery will keep his audience on the edge of their seat in anticipation that he might just once break out of his droning monotone and express something other than smug self-satisfaction.

~~~~~
* It’s not as if he’s taken his mayoral responsibilities seriously since he was elected, so no one will really notice the difference when he leaves office before his term is up.

** Saunderson’s email says the survey “…was created by me and my team, not some big research agency.  That’s because I want to get right down to the issues and hear from you firsthand.” Given his refusal to “get right down” to any Collingwood issues, like our corroded lampposts, crumbling streets, decaying sidewalks, rotting terminals, grubby parks, scruffy downtown streets,  bullying of female councillors, decorum at council meetings, or anything else of importance, I expect his willingness to represent our “needs and interests effectively at the Provincial level” will be as sincere as his attempts to discipline the boorish Councillor Madigan during council meetings.

*** His exact promise in 2014 was, “Change the purchasing policy to ensure there can be no sole sourcing of any contract for goods or services over $25,000, no exceptions.” Like so many of his other promises, he broke it in his first year on council, and hasn’t stopped breaking it since.