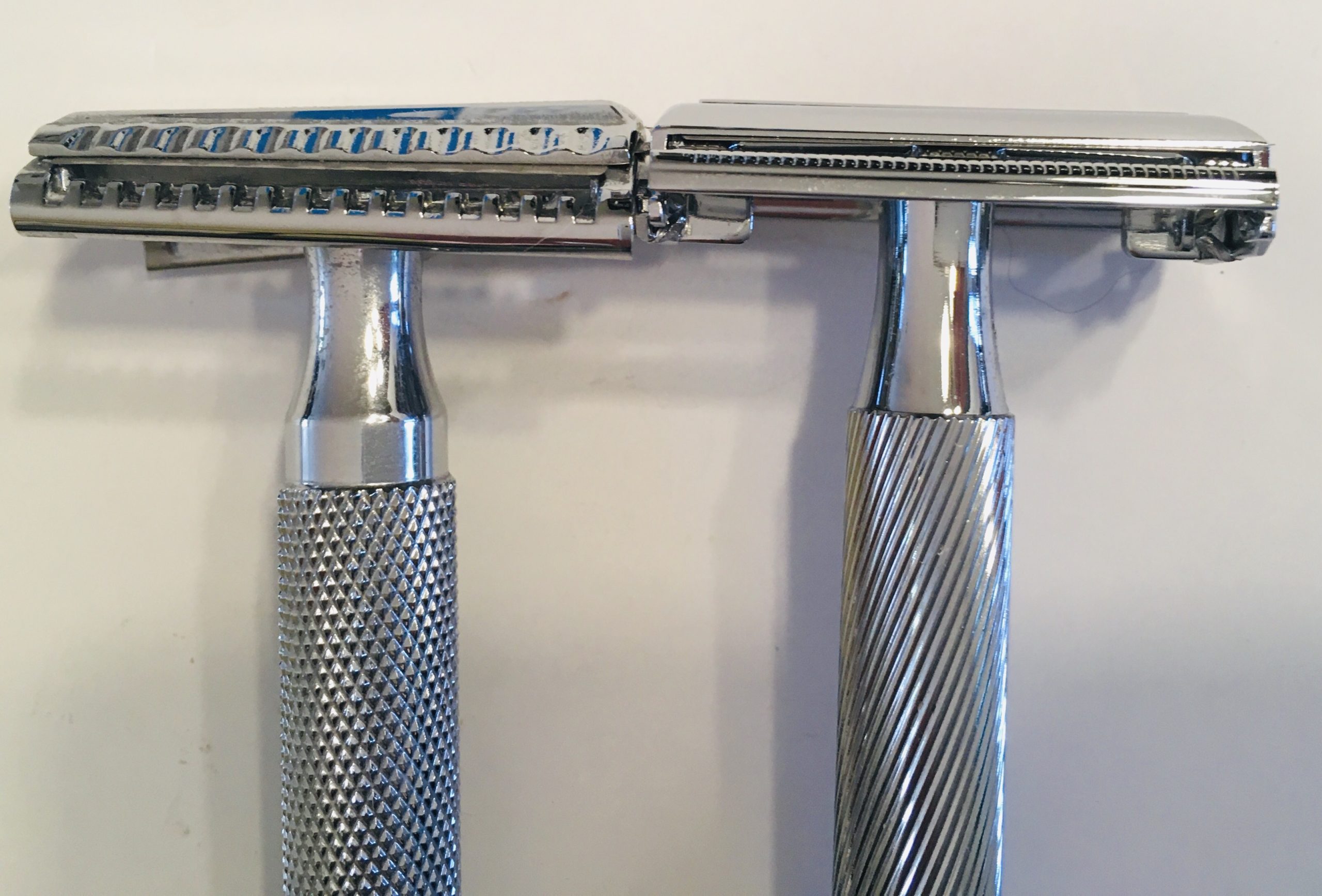 It’s been a while since I wrote about shaving, so I thought it was time to bring that story up to date. If you wish to read my previous posts on shaving, blades, and razors, you can do so here.

Suffice to say, I gleefully returned to the art of shaving with a double-edged (DE) safety razor a couple of years back and spent some time (and money) trying different brands and styles of razor and blade. I can’t believe all those years I wasted using those plastic razors with their environmentally-hostile throw-away blades. And don’t get me started on the time and money wasted on electric razors! I should have just mimicked my father and his habits, but that’s a far-too-late revelation now.

Shaving isn’t always a daily activity for me these days because I have retired from working with the public and care less about my appearance than perhaps I should. Many a day I look like those scruffy council candidates who barely shaved before the election and had no idea what a proper shirt and tie were for. Well, okay, usually not that bad, but still less well-groomed than I used to be. I suppose we should all be thankful I spend most of my time puttering around home.

Shaving for me is usually done every two-three days (I did let the full beard grow in for a while, but Susan prefers me with smooth cheeks so I relented). I’ve never been a hirsute man, but as I age, I find my beard seems to grow faster and thicker than ever. If I let it go three days, I get that grizzled, Burkowski-look that suggests sleeping rough and over-indulgence in certain strong spirits. Or a council candidate pre-election campaign.

Some time ago while I was learning about the various types and styles, I read claims about the effectiveness of slant-head (or slant-bar) razors. These are not new, just not as common today: the popular notion is that first slanted razor was patented in 1916; however, this site shows numerous earlier patents for slanted razors going back to 1904. They were rare until recently (for a while only Merkur made them), but now several companies manufacture them (or make the heads to attach to an existing handle). Interest in them is still growing.

A lot of people (well, okay, mostly men, but there’s no sexism in razors: women can use and appreciate the DE safety razors just as well) raved about these razors and their smooth shave on various shaving and barber forums, some stating they provided the best shave ever. I was a bit dubious of the claims, but eventually got curious enough to order a head (closed comb, Razorock German 37) to test. You can see it above, on the left (attached to a Rockwell 6S handle). The razor on the right is the Wilkinson butterfly-head (more on that, below) for comparison.

Here’s what it says on one site (Tools of Men):

Instead of cutting hairs straight on as you would with any other razor blade, the slant head attacks the hair at an angle (like a scythe).  This makes for a much cleaner cut on the follicle while reducing the pulling on the hair follicle as its being cut.

Hmmm. Wouldn’t you get the same effect by holding the razor at an angle (at lease one shaving blogger suggests so: check out his “Gillette Slide” video)? And the angle of the slant isn’t radical (I can’t find the exact amount, but I suggest no more than 4-6 degrees and probably less). I can’t help but wonder if there’s a certain placebo effect here.

Here’s the historical take from another site (Safety Razor Shaving) :

In it’s initial form, the guillotine had a blade that ran perpendicular to the frame. Although very effective, it was found however, that due to the straight angle of contact, the neck of the victim offered some initial resistance. Sometimes resulting in a more, let’s say, uncomfortable and messy cutting action.

Enter the highly recognisable angled guillotine blade. the precise angle of the blade allowed the neck to be sliced more quickly and cleanly.

There’s another aspect to the design seldom mentioned: the torque of the blade. The design doesn’t just angle the blade: it twists it (where the facing edge is up, the opposite side is down, and up where the facing edge is down). This stresses the blade and holds it more rigidly, so the blade moves less when shaving. Now, admittedly, safety razor blades don’t move much in a razor, but because they are so thin, they do have some flex while shaving. The slant-head reduces that. Small as that effect may be, it contributes to the overall result. 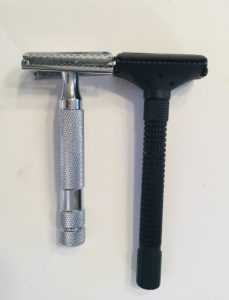 Does it work? I’d say yes: the shave is uniformly clean and close (most DE aficionados speak of a BBS or baby-bottom-smooth shave). Is it better than a regular razor? Not overwhelmingly,  but I have grown to like it enough that the slant-head has become one of my two go-to razors (replacing the Rockwell 6S’s most aggressive head which had been my go-to previously). Visually, the blade gap seems large (see the top photo), so it is an aggressive design.

I tried it on three-day-old beard and one-day-old, with older blades and new ones (and as always, a new blade is better). The result was a good shave every time. It does require frequent rising, however, because the blade is so tightly held that material can build up quickly along the edge.

The other go-to is the black Weishi adjustable, seen on the right. I like the Weishi because it has the most aggressive setting I’ve found on any adjustable, and I use mine at that setting (number 7). It also has a longer handle, which I prefer over the Rockwell short handle. it’s quite light for its size, too (the head and handle balance nicely for me).

Aggressiveness may seem a bit vague, but generally it refers to the gap between the guard and the blade edge: the greater the gap, the more aggressive the razor. This is accomplished in part by pushing the centre of the blade up into the top cover, away from the guard, which also seems to have the effect of clamping the blade somewhat more firmly in the head, making it less flexible. Open comb razors can be more aggressive than closed-comb (or solid-bar) too. 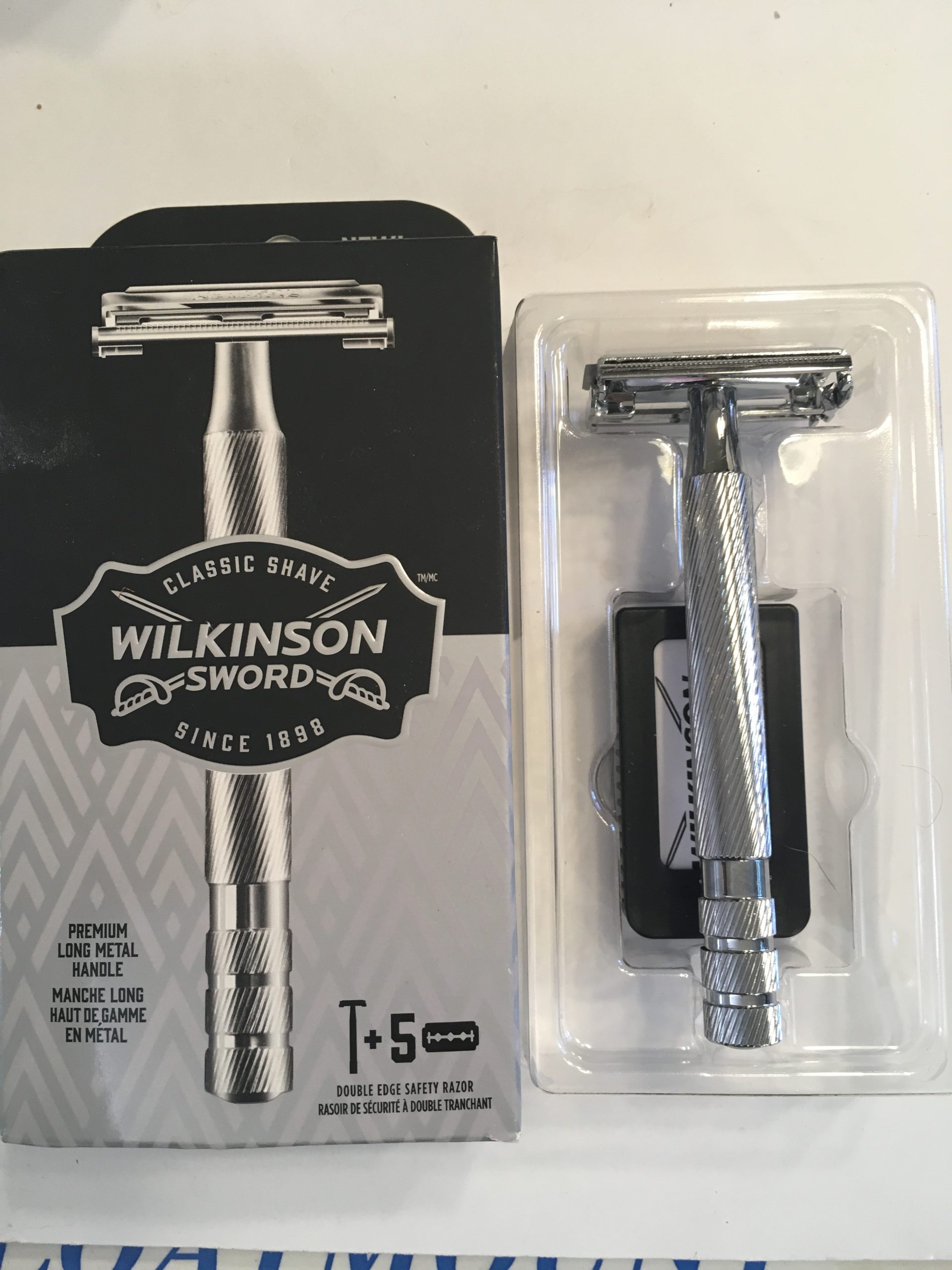 I also found a Wilkinson butterfly-head razor at a local box store for $20. I was delighted to find even ONE double-edged safety razor sold locally because none of the other stores – including three pharmacies of major chains, and three grocery-store pharmacies – sell any. Most don’t even sell the blades (Shoppers’ Drug Mart does, at exorbitantly inflated prices). Equally barren are the choices for shaving lotion or soap, although there seems a swell of choices for beard oils in these stores, for reasons I cannot fathom.

Either no one in these stores knows about these safety razors or blades, or they don’t want to encourage local shopping. Either way, I have to get most of my supplies and equipment online (the Toronto Barber & Beauty Store at Bay & Dundas has some good products, however). And it’s not simply Amazon: there are some good independent suppliers online, including several in Canada.

This razor comes with a package of five Wilkinson blades, which remain among my favourite double-edged blades (in large part because, unlike 99% of the others I use, are available locally). The setting is moderate-mild, so it’s a good, comfortable razor without being exceptionally mild or aggressive. It’s got a modest heft in the hand and a long handle. Closed comb, too.

Butterfly heads (aka twist-to-open) open and close by turning a knob at the bottom of the handle. This makes it easier and safer to manage blade changes. However, a bit more care must be taken to clean the tiny hinges and moving parts so they don’t stick or get corroded.

For the price and the shave, it’s a good entry point for anyone who wants to start or get back to wet shaving and the best razor (DE safety) designs. Of course, there are more expensive razors, but in my own, humble experience, spending a lot on a razor doesn’t necessarily mean you get a better shave any more than buying an Audi or BMW makes you’re a better driver than someone in a Toyota or Hyundai (usually the opposite is true!). Besides, many of the more expensive brands are made in the same country (and possibly the same factory) as the inexpensive ones.

While there’s nothing negative about this razor,  as a moderate shave it doesn’t fill a need for me at present, since I’ve moved to more aggressive models and have a few similar models from other manufacturers. However, I may use it as my travel razor for the future days when we can again travel for vacations.

My experience with this slant-head encourages me to look for and try others, perhaps one with a more radical angle. And perhaps a somewhat more elegant model than the Razorock I have. A Merkur or Parker (which offers a “semi-slant” model) or even other brand might be my next purchase, but I’ll read the reviews first.