It’s hard to explain to non-gamers why computer games – especially multiplayer games – are so much fun (and not simply a waste of time). It’s not just the amazingly detailled virtual worlds that offer rich, destructible, 3D environments to explore and move within. It’s not just the visceral experience of role playing or the adrenaline rush of combat/flight/racing against other players. It’s not just the sense of wellbeing from puzzle solving, accomplishing difficult tasks, or finishing challenging quests.

It’s all of those and more. To appreciate computer games you first have to like gaming: engaging in the challenge of pitting your wits and skills against an opponent, real or virtual. Electronic and face-to-face chess, solitaire, dominoes, or poker can fulfill that for many people. Others – like me – need a more fully-realized environment to entirely engage us.

You also have to appreciate the incredible complexity and processing power of a computer game: keeping track of dozens of other moving and firing players and/or AI units, plus missiles, bullets, trajectories, graphic effects like light, rain, smoke, cloud cover, shadows and bullet holes, free movement in a 3D environment, damage to players and the environment, ammunition loads, scores, all done in real time, updated and displayed in a constantly changing setting. Computer games are the most advanced and demanding software available.

You need a sense of imagination to immerse yourself into a computer game, to go from merely clicking the mouse or tapping keys in response to onscreen stimuli, and really become that worgen druid in battle with a night elf fighting for your life with enchanted staff and spells. It takes imagination to see yourself as a soldier in a desperate life-and-death battle in Paris or Tehran, as enemy soldiers and armour close in. It takes imagination to suspend your reality and pick up that sword to face the dragon.

Fortunately for me, I have a great imagination. It doesn’t hurt that I’ve been playing games ever since I can remember (chess was a serious passion in my 20s), and computer games since the late 1970s. In fact, I wrote the first regular magazine column ever that reviewed computer games exclusively (for Moves magazine in the early 1980s). 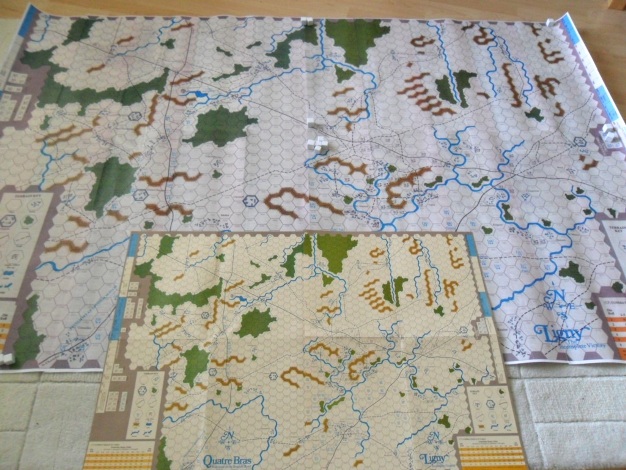 Quick segue. I started playing board wargames in the early 1970s, playing battle simulations like Avalon Hill’s Blitzkreig, Panzer Blitz and SPI’s Barbarossa and Napoleon at War. I played paper simulations of pretty much every major battle in history, from the ancient Middle East to futuristic invasions of North America or the USSR. Some were strategic scale, whole armies in a single counter; some were tactical, each piece a single vehicle. Along the way I read a lot of military history, debated the advantage of horsepower-to-weight ratios and argued shell sizes and penetration values, and the advantage of the square over the column formation with fellow enthusiasts. I knew the battlefields of Kursk, Waterloo and Arnhem intimately, if only from a paper-map perspective. I actually still have several of those games today, albeit no one locally to play them with. Anyone want to spend an afternoon over Napoleon’s Last Battles quad?

I like operational and strategic levels of play rather than tactical, but when I played board games, I’d play just about any level, any era, any style. I even became a published game reviewer in the board game industry, as well as a sometime beta-tester.

My preference in wargames and simulations has always been for realism over playability. I appreciate the attention to detail, even if it makes the game somewhat more complicated and duller. The balance between the two was always a struggle in paper games, but since computers, playability and realism have been able to combine better in one package because the sense of realism can be heightened through the visual and 3D elements.

For a long time, my favourite wargames were the Battlefront Combat Mission series. Graphics were mediocre, but the play was excellent and the programs took realistic, historical data into consideration in the many algorithms that calculated fire, line of sight, morale, casualties and movement speed. The system is best payed against another opponent, but the AI of the games offered a good challenge. I really liked the WWII series, but didn’t get interested in the modern line.

The CM series was very chess-like in its approach, not a real-time game, but rather turn-based. It was rather cerebral. It discouraged casual players, though, because it required thought on many levels, planning, and an appreciation of terrain, goals, morale, command control, line of sight and coordinated attacks. The AI was competent, although human opponents are always craftier and less predictable.

Then I got distracted with the shooters: Call of Duty, the Battlefield series, Red Orchestra, Bad Company, Operation Flashpoint and others. The latter two franchises tried to put some realism into the game: the rest are basically games with a patina of realism painted on to make them seem more than just mindless mouse clicking and killing dumber-than-stumps enemy AI characters. Still, it was fun to slog through the rubble of Stalingrad, crawl the jungles of Viet Nam, and shiver (virtually) on the snowy slopes of the Andes in the action process of gameplay.

Shooters are fun, but generally thin on realism. You’re in them for the action, not the effectiveness of the simulation of bullet penetration or ballistic trajectories. The AI in most shooters is somewhere between “stump” and “George Bush”, so don’t expect a lot of challenges. The usual method of balancing computer skills against human players in shooters is to throw in lots of AI, rather than making smarter AI. But to waste an hour, shooters are lots of fun.

Yet behind the simple gameplay lies a complex system for calculating real-time ballistics, movement, penetration, speed, damage, visibility and accuracy. In WOT, there are dozens of factors that affect your play, including the very obvious terrain: the gun calibre, type of ammunition, crew training and experience, engine horsepower, radio range, turret height, rate of fire, track traverse speed and amount and location of any damage sustained. There’s a deep tech tree for researching and advancing from basic, starter vehicles to more advanced and more powerful units, fueled by experience points gained while playing (and winning).

Fortunately for most players, you only have to to move, sight and fire. Controls are simple. The software takes care of the rest. That encourages a lot of players whose main goal is to waste away a few hours racing around and shooting, with less attention to strategy and tactics than a gnat has to Hegel. And don’t get me started on team play. A typical game sees a handful of “Rambos” race forward to attack, get destroyed, who then spend the remainder of the time sending whining messages to others complaining about their cautious gameplay. Luckily for the rest of us who like to think, games only last 10 mins or so.

Since WOT doesn’t have the respawn feature in most shooters, once you’re dead you don’t come back until the game ends. You can quit, but you lose any experience points the team may garner. You just have to wait until the match is finished. Dying early means waiting longer.

Sides are randomly collected from players waiting in the game queue, selected only by tier, so the sides are relatively balanced (tier 2 players may have tier 1 and 3 in the game, tier 3 may have 2 to 5, and so on). You get points for spotting, damaging (not merely hitting) and destroying a tank, as well as winning the match. friendly fire (killing your own teammates) costs you points.

All of the vehicles are from the WW2 era (early 1930s-late 40s). It’s a bit disconcerting seeing German panzers on the same team as Soviet T34s, but the selection process ignores nationality. There are only a few maps for the basic levels (tier 1 and 2), but a lot more get added as you progress. The maps are a reasonable size for 30 tanks (15 per side), and richly varied: Arctic, fjords, European towns, marshes, mines, towns, plains and more. The maps have a nice, European-theatre WW2 feel.

WOT is a nice balance: fun, easy, but with rich historical data and context. It’s only spoiled by the idiots who want to play it like their Xbox or PSP shooters. Success lies with using cover, careful, coordinated advances, skilled defence and teamwork. That requires more than the average gamer’s attention span, however, so most games are a mix of thoughtful, cautious players and idiots who leave their base and fellow players undefended to run ahead. Ah well, at least it’s just a game. And it’s free. So I shouldn’t complain too much. I can always fire up my chess program if I want something more cerebral. And it’s got me away from my World of Warcraft druids and worgens…