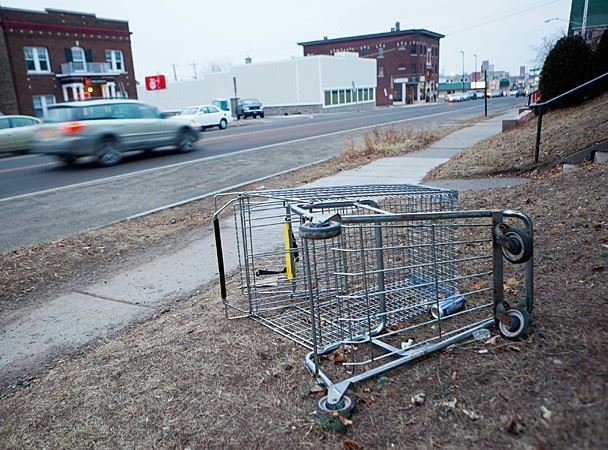 The shopping cart theory — or rather the S.C. hypothesis, since it really isn’t a theory in the proper scientific sense — is a test of our humanity, or so the notion goes:

The shopping cart is ultimate litmus test for whether a person is capable of self-governing.

But it’s more than that: it’s a test of civility, social conscience, morality, community, and ultimately our level of selfishness. But none of these sites seem to bring up the outright theft of shopping carts for the sake of convenience by someone too lazy to actually carry home what they bought — I’ve seen people pushing stolen carts dozens of times right here in my small town. The piece continues:

We’ve all seen people simply push their carts into an open space in the parking lot, then drive off. Simply because someone else has to go out and round it up for them doesn’t matter. All that matters is themselves and what is convenient for them. Doing the “right” or “proper” thing never enters their minds.

Being correct or doing the “right thing” often interferes with convenience, selfishness, and innate laziness.  Why walk another 10 or 20 metres to return a cart when you can leave it in the way for someone else to bring back? Another site with a piece titled, “The Trolley Test Decides If You’re A Good Person Or A Fkn Savage, So Time To Lose Some Mates” adds this:

The test asks a simple question: when you’re at the shops, do you return the trolley to the trolley bay, or do you just leave it in the middle of the carpark? …as the theory goes, whether or not you return the shopping trolley determines what kind of person you are. Why? Well because there’s no real consequences to NOT returning the trolley, nobody really cares if you do or don’t and there’s no reward for doing the right thing. But that’s just the thing, we all know that putting back the trolley IS the right thing.
The shopping cart is what determines whether a person is a good or bad member of society.

One site about this issue concludes with:

One thing is certain, simple things can be a test of our character.
When we do what is right when no one is looking. Our character is being strengthened. It builds a sense of integrity by standing for what is right and not operating mainly within the context of reward and punishment.
So next time you’re finished with your grocery, ask yourself: To return or not return the shopping cart, that is the question.

You get the drift. I don’t think people these days really care if anyone is looking. Or maybe they do it because someone is looking, to prove their utter indifference to social norms or other people. In a culture of selfies, selfishness is the supreme attribute.

Those who will leave a cart in the middle or a lot, or simply steal one and walk off the lot with it, feel entitled in much the same way people feel entitled to park in the handicapped spaces or fire routes (both of which can be witnessed here in grocery store parking lots most days). Other people’s views or the affect on other people these actions have don’t matter: all that counts is how anything affects them. We’re a society that is supremely narcissistic and consumer-driven: past social norms like civility, politeness, and courtesy have long been dumped in favour of selfish, inconsiderate behaviour (although seemingly less so among older generations). Caring for others and being considerate is so 1980s.

Last summer I was walking my dog and came face to face with a young couple (circa 18-22 years old) with a young child around 4-5. They were pushing a shopping cart along the sidewalk with their two easily-carried grocery bags in it — the cart was from a grocery store more than a kilometer away. I asked them why they were stealing the cart and if that was the lesson they wanted to teach their young boy. They answered they were just “borrowing” the cart — a lie — and then walked away. The next day the cart was abandoned on the boulevard a few metres from where they lived. They didn’t even make a pretense of trying to return it. For them, stealing the cart was justified because it made their trip home less burdensome. This is the lesson they taught their child: stealing is okay as long as it benefits the thief.

In response to the “theory” others have weighed in defending or arguing the points:

“A person who is unable to do this is no better than an animal, an absolute savage who can only be made to do what is right by threatening them with law and the force that stands behind it.”
“The shopping cart is what determines whether a person is a good or bad member of society.”
Some believed the theory to be absolutely true, with one replying: “I’m laughing at the people who are like ‘but I’m a decent person and sometimes I don’t feel like putting my cart back’. That’s the whole point, you inconsiderate, selfish jerk. It DOES say something about your character if you’re too lazy to do something so small lol.”
“The people bashing the test don’t like what it says about themselves or cannot admit to themselves that they are actually inconsiderate jerks.” 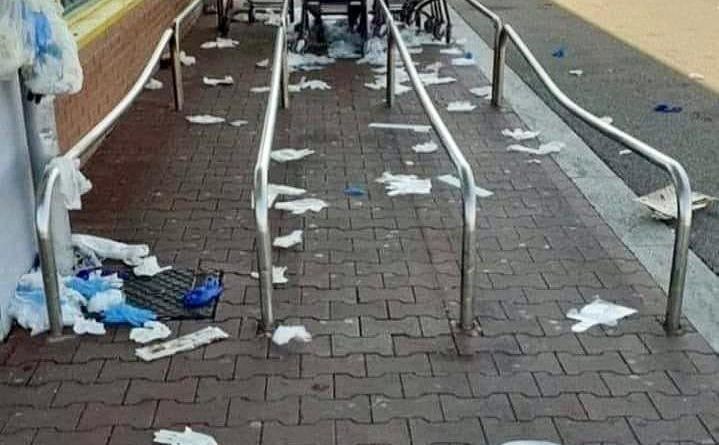 Shopping carts are merely one metaphor for the decay of civilization. You can equally measure good and bad social behaviour during this pandemic with the use (or avoidance) of masks. People who are considerate, aware of the needs of others (indeed being simply aware of others is worth lauding these days), who recognize their personal responsibility to the greater good all wear masks. Period. And they don’t litter them on the sidewalk or lawns when they leave the store. But we’ve all seen them; the masks and gloves just dropped by people too lazy or considerate to even put them in a nearby bin.

Yes, a miniscule portion of the populace may be adversely affected by wearing a mask, but we are all aware that the majority who refuse to are simply being immature and selfish. These people think they have some “rights” to threaten the lives or the well-being of others.

Smoking, too, is a similar measure of community awareness and social grace. Responsible, considerate, thinking smokers would never drop their butts on the street or litter them in any way. But smokers always do: they are both the most irresponsible and the dirtiest people in the world. They think it is their right to litter and despoil the planet. But I digress.

Wearing a mask during this pandemic has also been described as an IQ test, one which selfish people or Republicans/Conservatives consistently fail.

But it’s not merely a test of intelligence: it’s a test of appropriate communal and social behaviour, of consideration, of empathy, of selflessness, of basic humanity. As one researcher wrote, “One potential implication from this research is that there may be a minority of people with particular personality styles (on the narcissism and psychopathy spectrum) that have a disproportionate impact on the pandemic by failing to protect themselves and others.” It’s a test of our virtue, of our morality, of our ability to care about those around us.

Aristotle said that virtue is a habit, not merely an act or an event. In the Nichomachean Ethics he wrote, “Excellence [or virtue], then, being of two kinds, intellectual and moral, intellectual excellence in the main owes its birth and its growth to teaching (for which reason it requires experience and time), while moral excellence comes about as a result of habit…”

We need to practice virtue on a daily basis to make it our second nature.  it doesn’t mean great acts of kindness, or charity: it means every day acts like returning your shopping cart, or not littering your cigarette butts. Holding the door for someone else. Picking up after your dog. Wearing a mask while shopping. Just acting like a normal, caring person is all you need to do.