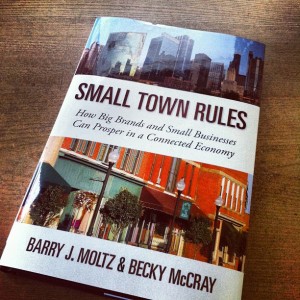 In their book, Small Town Rules (Pearson Education Inc., USA, 2012), authors Barry Moltz and Becky McCray explain seven rules for businesses that use the model of a small town to offer advice on growing and maintaining a business n the “connected economy.” And while most of their rules are aimed at businesses, I suggest some are equally applicable to small towns like Collingwood.

Don’t get me wrong: a municipality is not a business and despite some common functions and shared accounting techniques, a municipality cannot be run in the same manner as a for-profit business. For a start, we have split roles between management (politicians and administration), and the political role – even of the head of council – is only part-time in the vast majority of Ontario municipalities. Plus no single member of council has more authority or power than any other (one vote per person), unlike a corporate president or CEO.

Municipalities, unlike corporations, cannot run deficits. And they are responsible for a large array of services that are not, nor ever will be profitable (parks, for example, but also social housing, public transit, sidewalks, garbage pickup, libraries, museums and so on). But all of these services contribute to the quality of life than makes living here so wonderful, and on which we have come to depend.

And more than depend: municipalities that have lesser service levels or lack services entirely don’t have the economic advantages that those with those services have. That’s important when trying to attract new businesses to your town, or to retain existing businesses. Those services help create the municipal brand that people come to associate with your community.

Municipalities have just one main source of revenue: property taxes (roughly 42% of the average municipal revenue in Ontario – but also see the AMCTO study with historical data). Revenue from user fees, fines and permits are significantly lower than what is garnered from property taxes. Plus there are provincial transfers – which can vary with each government.

The largest single source of municipal revenues is the property tax. Property taxes are regressive, as lower- and middle-income families spend a higher proportion of their income on property tax than higher-income families. Canada has some of highest rates of property tax in the world, while most European and American cities rely much more on income and sales tax.
Income and sales tax revenues relied on by senior levels of government automatically increase with a growing economy, but property tax revenues don’t rise when property values go up. Municipalities have to adjust property tax rates annually if they want the revenues to keep pace with costs triggered by inflation and economic growth.

AMO president Lynn Dollin noted in a Globe & Mail article this spring that, “…municipal governments collect just nine cents of every household’s tax dollars. The other 91 cents goes to federal and provincial coffers. An analysis by the Association of Municipalities of Ontario (AMO) found that a $4.9-billion annual gap is forming between municipal revenues collected (largely from property taxes and user fees) and what is needed to pay for services, provincial mandates and infrastructure. Without changes, property taxes would have to double over the next 10 years to close this gap.”

And on user fees, CUPE adds,

User fees are the second-largest source of revenues generated by Canadian municipalities, and are charged for goods and services such as public transit, water, parking, and recreation. Municipalities facing political pressure to keep property taxes low sometimes increase user fees as an alternative to taxation. This can have unintended consequences, and ignores the wider benefits of public services to the community as a whole.
Take the case of transit. Hiking fares to avoid tax increases hurts lower-income individuals more – they are more likely to ride transit and will spend a larger percentage of their income using the service than those with higher incomes. Everyone reaps the environmental and economic benefits that come from having an affordable and reliable transit system, whether they use it or not.
Some municipalities try to structure property taxes and user fees to make them less regressive, recognizing that increased inequality harms their community. They subsidize services to keep fees down, or provide rebates and relief programs to those with low or fixed incomes.

Raising user fees tends to create diminishing returns. The public’s behaviour for such things as water consumption, or recreational facility use varies with the cost. When costs are high, people use less, reducing the income. Prices have to be managed to manage expenses without deterring use. But user fees only cover a portion of the cost to operate any facility or service. Property taxes must be used as well to maintain the collective services.

A recent article on TVO.org noted in an interview with Carlo Fanelli, a social science professor at York University:

…municipalities have responsibilities without power, whereas provinces have power without the responsibility in determining municipal services.”
This is complicated by the fact that municipalities can’t carry deficits or collect revenue from corporate or sales taxes, meaning that many of them derive more than half their services funding from property taxes — an arrangement Fanelli calls “inelastic and problematic.”

As for municipal debt, candidates can crow about reducing it, but in fact paying it back is required by law. But municipalities can’t just borrow money willy-nilly: they can only do so for limited purposes, as noted by the Ministry of Municipal Affairs and Housing:

Municipalities can only incur long-term debt for capital projects. They must balance their budgets in accordance with legislation and generally can’t borrow money over the long term to fund current operating expenses. However, a municipality may temporarily borrow money to pay for operating expenses while they are waiting to receive taxes and other revenues for the year. This framework assists municipalities by maintaining their long-term financial health while maintaining public services.

The Ministry also sets limits on municipal borrowing based on the ability to repay (the Annual Repayment Limit, or ARL). “For most municipalities, the ARL is set at 25 per cent of their annual “own-source” revenues (a ministry-determined amount which includes property taxes, user fees and investment income) less their annual long-term debt servicing costs and annual payments for other long-term financial obligations.” And every time you borrow money, the municipality’s ARL is updated for each proposed project.

It’s little wonder municipalities vie for casinos: the prospect of getting millions of dollars more every year into the coffers, instead of constantly having to raise fees and taxes, is very attractive. Which is why Wasaga Beach put together a committee to look into opportunities and pursue them vigorously – while Collingwood Council didn’t even raise the issue or hold even a single public meeting to get public input on whether they should look into the opportunity. Collingwood dithered for four years.

But I digress somewhat. The seven rules Moltz and McCray offer are, for the most part, common sense guides for any entrepreneur or start-up business:

As you can see, these are not necessarily confined to a business or profit-oriented focus. Municipalities, for example, need to concern themselves with their local connections and relationships. Next term, under new leadership, council will need to rebuild the relationships with our neighbours that were shredded this term by a council too shortsighted to see past its own borders.

Technology is also another key municipal issue. After quadrupling the town’s IT costs in a single year (with even higher costs to come!), this council then failed to develop even a single strategic vision for how to most effectively use the new technologies and resources available. The next council needs to contemplate ways to take advantage of technologies to better engage with residents, to communicate better and to enhance service delivery.

And as for customer service – one of the advantages of being a small town is having a small staff that residents can get to know and deal with as people, not merely faceless bureaucrats in a large army of them. I believe our town hall currently offers a good level of customer service, but we should always listen to those people who claim a poor experience to see if it can be improved. We can always learn from others.

Yes, I’m proud of our small town, although I do have anxieties over the pending growth the province has dictated for us. Managing that growth wisely, while retaining the small-town elements that make us special will be a special balancing act next term.

And too much money? Municipalities can rarely make that claim, but perhaps the glitter of impending cash from selling our pubic assets (without any public consultation) was what affected this council’s cognitive powers. Imagine, however, if council used it to lower property taxes for even a single year…

I recommend that incoming councillors read the book to see how these rules apply to municipal operations and governance. I didn’t recommend it to the current council simple because over four years they’ve shown a remarkable resistance to reading and learning. But I have hopes that a new council will be more receptive to ideas that aren’t their own.