I was browsing through my blog posts today and found I have actually written about improperly attributed quotations on the Net nine times since I first started blogging back in March, 2005.

On my old Mumpsimus blog, I posted two pieces about these bad memes:

On this new blog, which I launched in mid_December, 2011, I have written seven pieces about bad Internet quotes, starting with the Slowly Dies piece, in January, 2012: 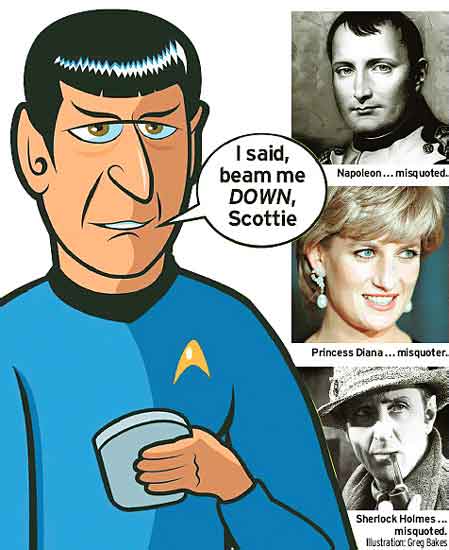 It’s got so that every time I see some cutely-crafted poster with its quotation done in some artistic font, I have to start searching online to confirm the source. If only the people who designed such beautifully artistic images put a fraction of the work into confirming the source as they do in making their posters look pretty, I would not be so quick to challenge them.

[pullquote]Unless we use critical thinking, unless we use intellectual analysis and skepticism, unless we question, we are condemned to being fooled, to being cheated and being mislead.[/pullquote]Perhaps it’s become a small obsession for me. I’m not the only one who tries to correct these. I’ve mentioned the Quote Investigator and Wiki Quotes in previous posts. Today I found a piece about a popular quote mistakenly attributed to the Dalai Lama (ntweblog.blogspot.ca/2011/10/that-dalai-lama-quotation-and.html). That in turn led to a post about a quote mis-attributed to Albert Schweitzer (ntweblog.blogspot.ca/2007/08/jesus-creed-historical-jesus-series_17.html). Wiki Quotes has its list of popular mis-quotes (en.wikiquote.org/wiki/List_of_misquotations), as does Wikipedia (en.wikipedia.org/wiki/List_of_misquotations). And more at Secular Perspectives (secularhumanist.blogspot.ca/2011/01/skeptically-fact-checking-quotes.html) from when comes the image above.

Why bother? Because people are posting and sharing wrong information without checking it first. If information is the currency of the 21st century, then what they’re posting is counterfeit coinage. It’s not simply a mistake; it’s devaluing real information. It contributes to the general dumbing-down of our society. And it underscores the terrible lack of critical thinking that pervades our culture. People are too willing to suspend belief, too willing to accept statements and comments at face value when they reinforce their own beliefs. Instead, they should be thinking, reasoning and above all, questioning.

For me, the words of the Buddhist Kalama Sutra (en.wikipedia.org/wiki/Kalama_Sutta) should guide everyone’s online activity:

Unless we use critical thinking, unless we use intellectual analysis and skepticism, unless we question, we are condemned to being fooled, to being cheated and being mislead.