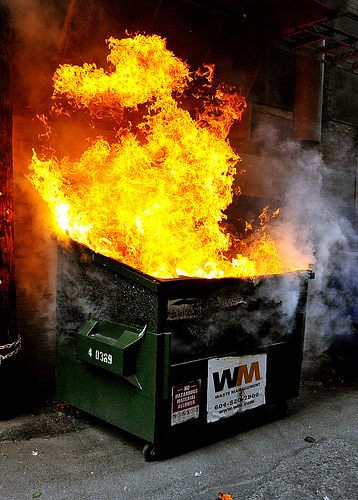 Watching American political dramas like their presidential elections is both entertaining and frightening. Yet it is also strangely educational. it has taught me a basic tenet: Americans as a people know little to nothing about politics. Not just about international politics, but their own.

It is a commonly held belief outside American borders that Americans are remarkably unaware of the history, politics, leaders, or even existence of other nations, but are often equally ignorant of their own. There are far too many YouTube videos interviewing Americans about both the USA and the world for me to list them, but look at the site yourself to see what I mean.

Sure, many of the US politicians themselves seem to know how their government works (or should work), and may even be masters of their craft, yet from political pronouncements clearly many are also woefully ignorant of political realities. Which explains in part why the general populace is often confused about even things within their own governance system, like the racially-motivated electoral college, how the three branches of government work (or are supposed to work), how executive orders are made, or what the Constitution says (and not merely one or two amendments cherry-picked to support an ideological stance; even their president is remarkably ignorant of this document).

When, for example, Trump implements a tariff on imported goods, his supporters cry in delight that he’s “being tough” on some other nation (as if toughness and nationalism were worthier attributes than alliances and cooperation), without even the slightest understanding that they — his supporters and all other American consumers — will pay the price. Not the other nation, not some foreign government, not some third party like the WTO or UN. The USA is the most consumerist nation on the planet: it’s the consumers who will pay for tariffs because the cost of their goods simply goes up to cover the tariff. But Americans seem not to understand what a tariff actually is: a tax on the things they buy.*

It’s especially evident at election time when the Repugnicans throw around insults and accusations that their opponents are liberals, socialists, communists, and far-left radicals… ooh! Scary! As if America even had a left wing! It only has shades of right; its most moderate politician would still be considered a conservative in many Western nations. But the right will label that person radical, socialist, and even liberal because it’s a dog whistle for rightwing voters. Lions, tigers, and bears, oh my!

This is mere fearmongering akin to calling people witches or warning gullible voters that immigrants will take their jobs: it works best and most efficiently when the audience is ignorant of the facts or is already fixed in their ideology (as in a Trump rally). But like in the Dark Ages, the masses are always susceptible to simplistic rhetoric.

The accusations may be risible to outsiders, but Americans themselves take them very seriously, even though it is obvious neither the accusers (like “Putin’s Puppet,” as their president, Donald Trump, is sometimes called) nor the audience really know what these words mean (yes, I am aware Trump  himself doesn’t know what many words mean, and has the literacy level of a four-year-old, but he is not alone in making these insults). One rightwing, and rather wacky author declared socialism was “…a pseudo-religion grounded in pseudo-science and enforced by political tyranny.” It’s hard to argue logically against such piffle. One cannot have a reasoned, mature debate with an opponent flinging ideological scatology.

The abject failure of American education to teach students the basics of history and political terminology is not alone: these words may have different meanings, depending on your own nation, culture, and political experience. But let’s start with a simple fact: every Western nation — even the USA — is socialist in some manner, regardless of how their politicians may disparage it. The opposite of socialism is really libertarianism (a system where rich, feudal warlords control everything and dole out services to the loyal, and the poor exist in indentured servitude or even slavery).

Communism (capital C to describe a state political system, as opposed to small c for the theoretical system) for example, has been a very different experience in almost every nation where it took root. One cannot fairly or accurately equate, for example, the political systems in Stalin’s USSR with those in modern Cuba, or China. Yes, they shared many common elements, as did all Communist nations, but not all, yet all Communist states were a dictatorship far more akin to every rightwing dictatorship than anything Marx envisioned.

It seems unreasonable to even call Communism a leftwing ideology when it behaves so much like the right (the Stalinist model is the modern Repugnican wet dream of government). The real difference, I suppose, is that rightwing dictatorships have pandered to corporate interests, particularly American, where leftwing ones didn’t.

But to even discuss communism (or Communism as a party or state government), you need to know and understand its history, roots, policies, and goals. You need to know the difference between political communism and economic communism, too. Which means you need a reasonably objective education in international politics and economics, or at the very least an autodidact’s aggressive reading habit on the topics.

Socialism is even more complicated because there has never been a single definition anywhere, nor any two states with the same implementation. Communists used the word in different ways from capitalists and pro-democracy politicians, and the word is used to describe both political and economic systems.

In his book, The Rise & Fall of Communism (Doubleday, 2009, p. 102), Archie Brown attempts to provide a working definition of both socialism and communism some of which is worth repeating. He credits the British political theorist Michael Lessnoff with the definition of socialism as, “democratic control of the economy,” which strikes me as probably the most accurate of all I’ve read. Lessnoff believed capitalism and socialism were “conceptually compatible rather than irreconcilable opposites.” He added that nations like the USA and UK were “undoubtedly more socialist than the USSR or the People’s Republic of China.”

Brown himself adds that if democratic control of the economy is “the main criterion of socialism,” then Lessnoff’s views are “not illogical.” Brown noted,

…the essence of socialism is not in centralized, statist ownership, but in social or public ownership which could be in the form of co-operatives, guilds, or municipal control as well as of — or as an alternative to — nationalized industries.

Brown also wrote socialism and communism have “significant differences concerning the relationship between means and ends.” He makes the point that in no country has Communism been able to win its way to power via democracy, but only through some form of coup or military takeover. Communism has always been imposed on a nation, not voted into it. On the other hand, socialism exists through broad approval of public services, public assets, and public facilities in every democratic nation because these serve a need for the greater good.

Liberal is a proud label for anyone who cares about social, environmental, health, educational, or justice issues, about civic responsibility, about labour conditions, about public institutions, public services, and public infrastructure, and about the greater good. Liberals have achieved pretty much every social improvement, legislation, and public benefit, despite conservative opposition, even in the USA.

Liberal has become an insult in the mouths of Repugnicans because they do not believe in these things, and they despise those who do. They believe in corporations, the NRA, billionaires, laissez-faire capitalism, and profits-before-people, all of which run counter to any public services or benefit to the greater good.

Like socialism, though, liberalism has a broad and not-universally-agreed-upon definition. It is often used in opposition to the right’s pro-corporation, profits-before-people ideology, but that’s overly simplistic and ignores the long historical importance of liberal thought that includes such thinkers as Mill, Rousseau, and Hobbes.

As the Encyclopedia Britannica describes it,

The Repugnican harridan Ann Coulter may disagree, but that seems more a badge of honour than an insult. I’d rather be on the side of the people than the corporations that prey on them.

* On the American consumer, see Shoptimism, by Lee Eisenberg (Simon & Shuster, 2009), described as “a provocative and entertaining tour of America’s love/hate affair with shopping, a pursuit that, even in hard times, remains a true national pastime.” To be fair, the USA is not the only consumerist society, merely its most active, and consumerist behaviour often tends to override social or political concerns.

In a 2017 article titled, The Crisis of American Consumerism, professor Amitai Etzioni wrote,

What needs to be eradicated, or at least greatly tempered, is consumerism: the obsession with acquisition that has become the organizing principle of American life. This is not the same thing as capitalism, nor is it the same thing as consumption. To explain the difference, it is useful to draw on Abraham Maslow’s hierarchy of human needs. At the bottom of this hierarchy are basic creature comforts; once these are sated, more satisfaction is drawn from affection, self-esteem and, finally, self-actualization. As long as consumption is focused on satisfying basic human needs — safety, shelter, food, clothing, health care, education — it is not consumerism. But when, on attempts to satisfy these higher needs through the simple acquisition of goods and services, consumption turns into consumerism — and consumerism becomes a social disease.