Writing has been described as the most significant human invention. We tend to think of inventions as mechanical things, like the wheel, or fire, or the printing press, the airplane, the internal combustion engine or cell phone. But without writing, few of them would exist. Writing allowed us to share the others, to improve them, to record them, to pass them along and record them.

Writing allows us to share ideas, emotions, visions, beliefs, stories, poetry and music through a series of abstract squiggles. Without writing there would be no literature, no religion, no philosophy, no songs, no politics. We would not have a history or mythology beyond what we could share orally. And when you consider writing is no more than 5,000 years old – out of a history of humankind that is millions of years old – it’s pretty astounding that is is so relatively recent.

Humans experimented with various pictographic scripts prior to writing, but they tended to stay localized because they were both difficult and complex to learn and share. They are inefficient for conveying large amounts of information and data, too. With writing came laws, taxation, the census, banking, the codification of government and of religion.

Turning sounds into abstract symbols that could be pieced together into words was a new idea that seems to have developed in ancient Sumeria and Egypt almost simultaneously (both before 3000 BCE).

The Sumerians first used writing to keep track of mundane lists: sales, inventory, receipts and temple donations. That evolved to put laws, genealogies and myths into clay – works we still have and can read today. To be able to read the Epic of Gilgamesh, a remarkable tale written around 2100 BCE, today is entirely thanks to the invention of writing.

In Egypt, migrant workers developed a written script as a phonetic way to learn the speech of their Egyptian taskmasters because they couldn’t master the hieroglyphs. Or it may have begun with their graffiti scratched into a quarry wall. Either way, it was a brilliant and necessary invention.

As a writer, with a passion for typography, all the aspects of writing have long fascinated me, including the neurological effects of reading. How, for example, do we assemble these squiggles into meaning, and more to the point into shared meaning? E, for example, is just | with _ _ _ arranged in a particular way, yet we see E and assign it a sound, a function, a role. We have an agreed-upon order that lets us assemble these marks into coherency. That’s why we accept that E and e are the same letter, even though they don’t look at all alike.

When I write “tree” how does a reader parse these symbols – themselves constructed of nothing more than abstract lines and curves – into the hierarchy of letters, assign them each meaning, then coagulate them into a word, and assign it a meaning separate and above its own letters? How is it that we understand and conceptualize “tree” but not “rtee” or other variations? That we know tree isn’t etre even though the two are composed of the same lines and curves?

Not only that, but a simple sentence like “I slowly climbed the old apple tree in my yard” is turned from a collection of symbols to a mental image in astoundingly rapid time. Each bunch of symbols is constructed into words; words into sentences; verbs, nouns, adjectives assigned; each with definitions and an understanding of how they relate to the other words.

You and I have likely never spoken. We have never sat down to agree on the meaning or definition of apple, or tree, or old or climbed; they were conveyed to us through our education, our parents, peers and our culture. Yet all those symbols, all those squiggles and lines made perfect sense. We have a shared cognition that allows us to understand my sentences, even if we may not share the same mental image for every word (is your apple a red Delicious or a green Granny Smith?). Yet we generally take this remarkable sharing for granted.

I can pick up a book written in French, Latin or Spanish and, with difficulty and the help of a dictionary, understand a portion of it because I have some small education in these languages. But even when the symbols are the same, languages like Portuguese and Italian are opaque to me despite the shared symbols. Yet even for them I can put together the lines and the curves and pronounce the words. They just don’t connect to the vocabulary centres in my brain.

What if we changed the look of those familiar lines and curves? Bent some, straightened some. Added or subtracted others? Would it still be a recognizable language? In effect, that’s what creative type designers do. They often push the limits of comprehension with their designs.

Chinese artist Xu Bing explored this idea several years ago, first in his Book From the Sky in the 1980s, and again in the early 1990s with his book A,B,C….

He developed a new character set in 1994, and presented his ideas in his 2000 book, An Introduction to Square Word Calligraphy. In it, Xu Bing used Chinese-style brush strokes to remake English letters and arrange them so the writing looked Chinese but the words were in English (a bold move in an era where even the hint of “cultural appropriation” sets off a frenzy of angst, anger, recrimination and self-flagellation among the self-styled mavens of political correctness). Here is his character set as first proposed in 1994: 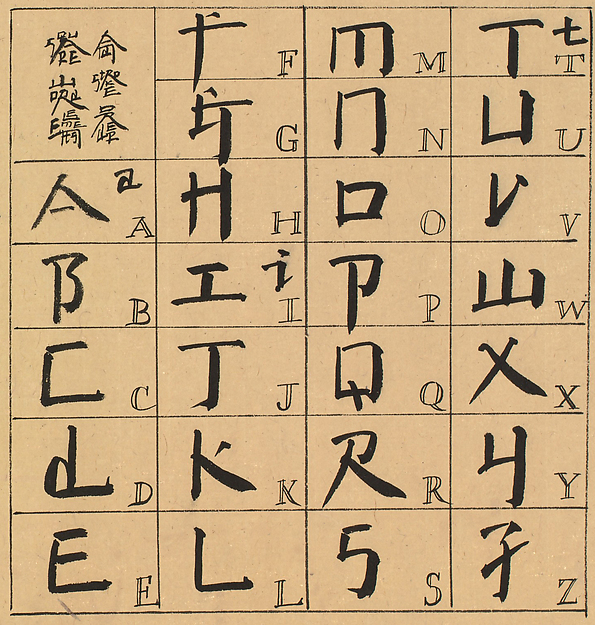 When displayed like that, it seems relative basic. But there’s more to it. As it notes on the Great China blog:

Xu Bing attempted to fuse written English and written Chinese. He designed a system whereby English words are written in the format of a square, so as to resemble the consistent size of all Chinese characters. To achieve this, he utilized the fact that some of the 214 different radicals (component parts) used to write Chinese characters also resemble the letters in the Roman alphabet. Based on the similarities of certain of the Chinese radicals and the Roman alphabet, Xu Bing created his own Sino-Roman alphabet. Using those Sino-Roman symbols, he began to write English words by combining the letters of individual English words into squares, with all the letters of any English word present, but formatted into a square shape. I came across Xu Bing’s work recently in the gift shop of the AGO last month where I picked up a copy of his book “Book from the Ground: from point to point” in which he writes a lengthy story using only pictograms. No words as we know them: no English to guide the reader.

The site of MIT Press, its publisher, noted:

Following his classic work Book from the Sky, the Chinese artist Xu Bing presents a new graphic novel—one composed entirely of symbols and icons that are universally understood. Xu Bing spent seven years gathering materials, experimenting, revising, and arranging thousands of pictograms to construct the narrative of Book from the Ground. The result is a readable story without words, an account of twenty-four hours in the life of “Mr. Black,” a typical urban white-collar worker.

A whole novella written entirely in pictograms. Universally understood? I’m not sure – a challenge! I was immediately intrigued and wanted to test my skills at deciphering it. I also ordered “The Book about Xu Bing’s Book from the Ground” about Xu Bing’s book which, according to the description, “…chronicles the entire project, mapping the history of Xu Bing’s novel creation from inspiration to exhibition to publication.”

But it is Xu Bing’s idea about calligraphic type that really appeals to me. And apparently others, too. It was enhanced in 2012 by Dr. David Kelley with a revised character set. His character set is seen on the Omniglot website:

As far as I know, no one has yet made a font set (TTF or OTF) of this design (please contact me if you have!) I have vectorized it in CorelDraw and made it into EPS files, and will work on creating more vector files and improving the symbols, but I lack the software to convert the characters into a typeface.

Unfortunately, there is little more about Kelley online that I can find to further my understanding into his views and design style (Omniglot has more alphabets he has designed, by the way, just a few of the many constructed alphabets it has there).

Using Kelley’s chart, can you determine what the characters at the top of this post say? I couldn’t at first, but with a little practice, am now able to read them quite easily. It says (reading top to bottom): Live Long and Prosper, Spock’s Vulcan saying from Star Trek. See it now? Once you get past the notion of having to have all the letters align left-to-right, you can see the words.

Using the red characters from the chart above, try to decipher this line:

This is a bit tougher because several letters are reshaped (distorted) to fit the square word format. It reads, “All human beings are born free…” The site has several other examples for you to work on. Once you get the hang of it, you can appreciate both the art and its effect on how we read and comprehend. I hope that for you, as it did me, it gets you cogitating on language, writing, word structure and just how amazing the ability to read is. And maybe you will – as I am doing – play around with these ideas, create your own works, maybe a name seal or family motto using them. Have fun.