As I predicted earlier, the costs for Saunderson’s Vindictive Judicial Inquiry (SVJI) are going to climb through the roof. And of course you, the taxpayer, are going to pay for it.

Last month local media carried stories that the SVJI – scheduled to begin this month (November) – wasn’t going to meet its deadlines. It was delayed and would not start until the “new year” (apparently not until February, 2019). Bayshore Broadcasting notes in its coverage*:

The inquiry team had hoped they would start this fall, but Inquiry Counsel Janet Leiper tells us that won’t be possible and that it will be the new year before the public hearings can start. She says that’s because the rest of some of the necessary documents aren’t expected until the end of November.

Three more months of lawyers being paid $400-$700 an hour, plus travel and accommodations , plus the other staff, computers, phone, office space… That’s going to hurt the town’s budget but hey, it isn’t Saunderson’s money he’s spending. And it helped him win the election, so he doesn’t care what it costs you.

The piece also noted the inquiry had already received about 11,000 documents and interviewed more than 60 witnesses, some of whom may need to spoken to again. Ka-ching!**

Alectra – the company that came from the merger of PowerStream and other Ontario utilities – has already submitted more than 4,000 documents, sorted out from about 40,000 the company had from the time period in question. But that’s not enough: the SVJI wants more paperwork from more people.

Alectra’s lawyer, Michael Watson, said that could mean sorting through 100,000-200,000 documents from that period.  Big job. So why not do it twice? The Connection noted:

(Judge) Marrocco suggested the company provide the documents and allow inquiry staff to do a search while Alectra does the same.

Okay, let’s do some cost and time estimates on the effort required to search through 100,000 or more documents. 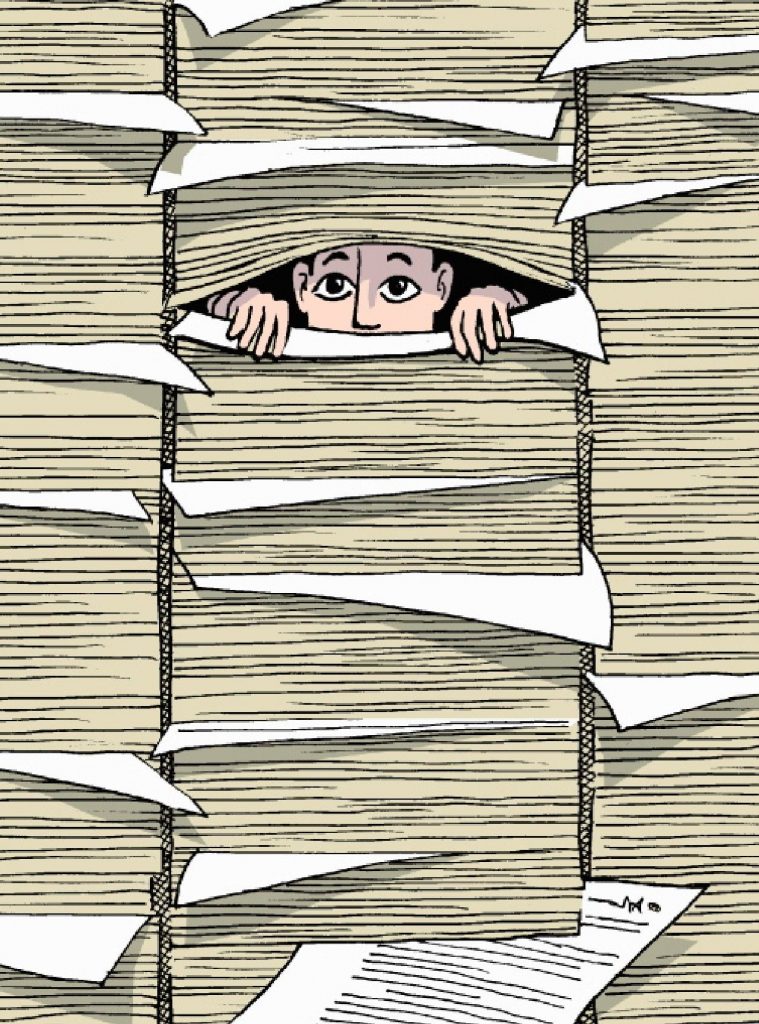 How quickly can one person scan a document? Well, it depends on the length of that document. It isn’t specified whether these are single or multiple pages.

A typical letter-sized (8.5 x 11 inches) page contains roughly 500 words. Most average readers process 200 words per minute with an actual comprehension level of about 120 wpm. So the average reader takes two and a half uninterrupted minutes to read a single letter-sized page packed with text, but will only fully realize about 300 words of it. (Lower comprehension means the reader may have to re-read some or all of the text to understand the whole).

But let’s assume many of these documents are emails – considerably shorter than a page of text. They may even be 100 words or less. So let’s make some guesses here.

That’s assuming a lot, I know. For the average reader (200 wpm), that means each document contains just over three words. At 500 wpm, they could have 8.3 words each. Pretty short even for email – unreasonably so for a realistic estimate of time.

But what if there are much longer pieces – like consultants’ reports or financial statements – that require more time to read? Say half of the documents are full pages – 500 words each. Fifty thousand pages at 500 words per page is 25 million words. That’s 125,000 minutes or almost 2,100 hours. Remember: a single “document” can include multiple pages, too.

Okay, what if only ten percent of them are full pages? Ten thousand documents at 500 words is still five million words to read – almost 420 hours of continuous reading. That would cost $165,000-$295,000 for this section alone.

And if the total number of documents is closer to 200,000 – double both the costs and the time. Ka-ching, ka-ching!

Sure, I concede that lawyers, being accustomed to reading in their professions, are likely to be better and faster readers than, say, some local bloggers or local lawyers (and certainly better writers!), but even at 500 words per minute, that’s 167 hours of reading or 4.76 weeks to go through 10,000 single-page documents of 500 words each. At $400-$700 an hour.

And if there are more documents on the way than what I’ve calculated here – imagine DOUBLE that figure – well, you can see that the SVJI will take many, many more months than originally estimated. And the costs – originally $1.6-$2 million – will be much, much higher. Your tax dollars paying for what amounted to the launch of Saunderson’s mayoral campaign (or, depending on your perspective: witch hunt… or both). Ah well, you voted for him, so this is the payback.

But wait – that’s just Alectra. It doesn’t include those from other sources, like the town. Collingwood Today noted,

William McDowell, the lawyer representing the town, confirmed the town had 4,200 documents nearly ready to submit, and he expected the next batch to be bigger than that.

(McDowell is, you will recall, the lawyer who was hired – sole-sourced, of course – by the former CAO to tell Saunderson and his council minions they needed to hold a judicial inquiry and then ended up being hired as the lawyer to represent the town at that same inquiry… and none of The Block even questioned that…)

So the inquiry expects to receive a lot more than just the 11,000 documents it has already received (and we were not told if the inquiry had actually read the first lot yet!) – it will get several thousand more to peruse, perhaps that many more, just from the town.

How many in total are delivered remains to be seen, but as I understand it, the inquiry is also investigating the secretive processes of this term that led to the privatization of our electrical utility without any public consultation – and the people behind that shadowy, unethical decision with its plethora of closed-door meetings, and sole-sourced lawyers and consultants. That could lead to many thousands more documents to read and assess. And more witnesses to grill.

Not to mention the town has already had to move one department (treasury) out of town hall to make room for the inquiry – any delay means the further leasing etc. costs to house them downtown will continue to add up.

Of course the inquiry could always hire junior staffers to read the documents instead of lawyers – but then they’d need more room in town hall to house them. If so, which department will be booted out next and where to? at what cost? I can imagine a day when town hall is occupied solely by the judicial inquiry and the front desk staff.

But sooner or later the lawyers have to read the relevant documents, too. Time and money is required to accomplish that (and unlike our current council, the lawyers cannot do their job without actually reading anything…)

Either way, taxpayers are shelling out far more for the SVJI than Brian and his minions  led us to believe would be our collective (albeit unnecessary) burden.

It’s going to be a long, costly process and I won’t be surprised when it tops $6 million. And in the end what will all these wasted millions accomplish? Right; a pile of papers. Instead of, say, a splash pad and winter skating trail on the waterfront. Instead of repairing sidewalks and roads. Instead of a tax cut. And we get a new mayor who rode into office on this. Lucky us.

~~~~~
* The reporter incorrectly names me as a “client” but that is incorrect. I asked for standing to present written documentation, but am no one’s client and have not asked for funding. Local media should know better.

** I don’t know how long each witness was interviewed for, but at least several lasted two or more hours, with two interviewers present. At the low end of the scale – $400 an hour each – that’s $1,600 or more per person; at least $100,000 for these preliminary interviews alone. Plus travel time, accommodations, etc.