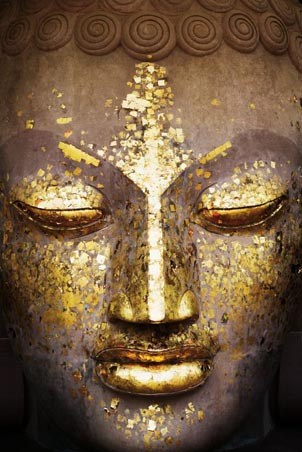 There’s a famous Zen tale that I was reminded of as I was reading the media release about the Collingwood Airport this week. It somehow seemed remarkably fitting.

It’s about the folly of selfishness, of thinking yours is the only way forward, of possessiveness, of narrow views.

I first came across this tale in the late 1960s, in a copy of Zen Flesh, Zen Bones, by Paul Reps. I still have that book; a battered paperback I have carried with me ever since. This story is only one of more than 100 in the book. It’s number 48: Black-Nosed Buddha, and, in the spare way such tales are told in the book, it goes like this:

A nun who was searching for enlightenment made a statue of Buddha and covered it with gold leaf. Wherever she went she carried this golden Buddha with her.

Years passed and, still carrying her Buddha, the nun came to live in a small temple in a country where there were many Buddhas, each one with its own particular shrine.

The nun wished to burn incense before her golden Buddha. Not liking the idea of the perfume straying to the others, she devised a funnel through which the smoke would ascend only to her statue. This blackened the nose of the Golden Buddha making it especially ugly.

There are other versions of this tale, some with morals and explanations, most without. Osho ends his version with a conversation between the nun and a priest. The priest says,

We are making each others’ faces black because of our possessiveness. If we could give without even thinking to whom it reaches…. Because to whomever it reaches, is part of the same existence as we are part of — it reaches to us.

In Osho’s tale, as in some other versions, the nun arrives at a mountain temple where there are already 10,000 statues, and hers is but one among many. Of course, she is just one among many other worshippers, too. Just like our councillors are but a few among twenty thousand residents here.

The wind that swirled around the mountain carried the incense from her statue to mix with that going to the others. That was intolerable for her.

Hers was the only deserving one out of all the 10,000 around her. So she made a device to funnel her incense to only her statue. Had she lived today and sat on council, she would likely have called for consultants to plan to make a preparation for a plan…

You can see the folly. You can see why I think it’s relevant to our local airport, I suspect.

Attachment of this sorts is one of the reasons for suffering, the Buddha told us in the Four Noble Truths. We cannot rise above our petty selves, or mundane desires, our shallow lives unless we shed our myopic, suspicious clinging. There are bigger issues than our own perspectives can see.

It’s not just a personal lesson: attachment is a truth that reaches to all aspects of our lives, including our politics. Politicians must give up their petty, personal desires for the greater good if they are to give us good governance.

The result of the nun’s efforts, was, of course, an ugly, blackened statue. And that’s what’s happened with our airport. Instead of a cooperative venture with our neighbours, a sharing and supportive relationship, a building exercise that bloomed, instead of looking to the greater good, a handful of people on council and the administration blackened its nose.