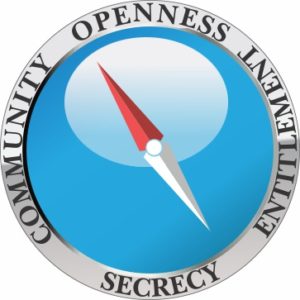 Every politician – in fact, every human – has a personal moral compass that helps guide the way they act, debate and vote in office. While a politician’s may not be the same as the compass that they use as civilians, as family members, as employees, or as a friend, it operates similarly to direct their actions.

For some, their moral compass is a strong internal force that is the same regardless of circumstance or role. For them being a politician is not morally or ethically different from being a member of the community, from being in a service club, a community organization, a church group or just a circle of friends. Their moral compass is the same in all situations. They see right and wrong, good and bad in the same perspective whatever their circumstance. I like to think of myself in that group.

Others have a more flexible moral compass; one that changes according to role and circumstance. They may be relativists who see morals and ethics as variables, as situational guides; relative signposts not absolutes. As politicians, they may even choose to ignore their personal moral compass and instead base their decisions on party platforms, on a fixed ideology, or on what someone else tells them to do. I believe most of the local incumbents fit comfortably into this category.

Party politics are often like this: they create a rigid standard of ethics, morals and beliefs that every member of that party is expected to follow, regardless of how these interact or even clash with personal values. Party members  submerge the personal views under the party’s line. That’s not always bad, but it can often sideline conscience.

Municipal politics are supposed to be about individual conscience, not about partisan politics or blind faith in any leader. The moral compasses of councillors should not all point towards one person’s north. One of the strengths of municipal politics has always been the variety of ideas and views it allowed.

Do obedient soldiers, those gray ranks of “komitetchiks” make the best decisions at the council table? I don’t believe so, at least not for the community’s well-being. I believe councillors should vote on issues according to their conscience, based on their research and their understanding, based on effort and thought, on discussions with residents and staff, not simply because someone told them how to vote.

A campaign’s moral compass is not entirely the same as a candidate’s individual moral compass. Rather they are parallel expressions of the ethics and morality that guide an election and often frame the discussions and issues.

Campaign compasses are more collective in nature, coming in part from the behaviour and decisions of incumbents, in part from the reactions and responses of the public during the recent term, and from the aspirations and goals of the candidates themselves.

And to complicate matters, campaign compasses are often multi-faceted, not easily reduced to simple right-wrong or us-them axes. They also change over time: as issues move from foreground to background and vice versa, the compass headings can change. Issues can rise and decline in importance, often without warning, making candidates react to the issue-du-jour extemporaneously rather than according a fixed map.

But despite that, despite generalities seldom being a neat fit for individuals, there are often polarities that define a campaign and its candidates. Past behaviour – especially that at the council table – provides some insight.

The current municipal campaign in Collingwood has evolved along very clear, identifiable – and deeply divisive – axes. And it’s worth examining what we know to date of the poles and where the candidates fit on the axes.

The north-south axis is openness and transparency at one end, versus secrecy and deception at the other.

This council had almost 50 closed-door meetings about our electricity utility, almost 20 about our airport and many about our hospital. During these secretive meetings, they have privatized both our electricity utility and our airport (and almost gave away our water utility as part of the bargain), and set back our hospital’s much-needed redevelopment by as much as ten years. Yet in all this time, they’ve never held ONE public meeting to consult with residents over the sale of public assets. They’ve never explained why they wanted to do any of these things and never presented a business case to justify any of them.

Clearly those incumbents align with the secrecy-deception pole. Their record in this is inescapable and well-documented. Can we really condone four years of dubious room deals, deception and obfuscation? Does Collingwood deserve a Putin-esque government that hides its decisions and its actions from the public and doesn’t engage or consult with its residents?

The other pole on this axis is openness and transparency. When you consider selecting alternative candidates, you should ask which of them support actual democracy, open and accountable government, not merely give it lip service.

You want to know who will demand public engagement and public consultation when it comes to managing public assets. Which candidates will tell the public WHY they want to act or vote in any way, and not simply dictate them? Who will communicate, who will inform, who will keep the public engaged?

The east-west axis is along similarly polarized perspectives: community good versus personal entitlement and personal agendas. This is another very clear polarity in which the incumbents all align heavily along the entitlement pole. Who among the candidates are trustworthy enough to oversee the public interests and not simply look after their own?

Every effort, every initiative of council should benefit the greater good, not the councillors themselves. We should not elect people for what they can get from the public trough, or how they can use public funds to push their agendas.

Would any of the candidates support a motion that no one on council gets a pay raise in a year when the property taxes go up? Or a policy or bylaw that forces them to pursue their personal political goals within their existing council budgets – and not get an unlimited expense account to pursue personal, out-of-town political goals?

So when assessing candidates along this axis, you have to ask how their promises and goals align along the moral axis. Do candidates have goals for the greater good, that benefit the community, that strengthen our municipality? Or just push their own agendas? Ask these candidates what they can do  – or ask incumbents what they have done – for Collingwood, not just for themselves.

Can we afford another four years where the community’s reputation, its business, its infrastructure and its growth get ignored?

Always keep in mind where candidates sit on the campaign’s moral compass. Then vote for those who align with your own personal moral compass.*

“Politics is less a science than an art,” said the German chancellor Bismarck. “It is not a subject that can be taught. One must have a talent for it. Even the best advice is of no avail if improperly carried out.”

* Issues may arise that refocus the campaign’s moral compass, of course. Who foresaw that the placement of patios would become the pivotal issue in 2010? Will it be the Terminals? Cannabis sales? Cycling safety? These issues are lurking in the background as others may be.  But others are in plain sight.

Consider the hospital: a concern for any resident, but some candidates are trying to pretend it isn’t and some claim they always supported it when the record is clear that they did not. After more than two years and a quarter of a million dollars of taxpayers’ money wasted hiring sole-sourced lawyers, planners and a PR consultant to fight the hospital’s redevelopment, at the last minute, the incumbents voted to support the plan. Is anyone naïve enough to believe this patently political gesture was sincere? Had they actually intended to support the plan, why didn’t the incumbents propose an Official Plan Amendment that would remove any planning challenges from the redevelopment? Something to consider when pondering each candidate’s moral compass.