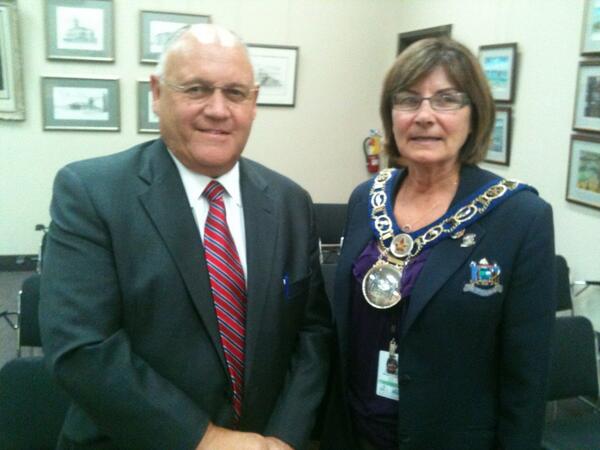 Collingwood has appointed an interim CAO, John Brown, former city manager of Brantford, St. John’s and Oshawa, to help the town’s administration and governance during the interim while we search for a full-time CAO.

This will, of course, send the bloggers into a frothing tizzy of frenetic accusations and conspiracy theories. So to save them the effort of having to explain this, I have written some plausible conspiracy theories for them to consider for their own use:

1. It’s actually Paul Bonwick, cleverly disguised by cosmetic surgery to look shorter, older and bald. Paul was last seen boarding a plane to the Orient this spring, where skilled Asian surgeons operating out of a secret Liberal off-shore medical facility funded by casino resort developers, cunningly changed his appearance by artificially aging his skin and removing several vertebrae to shorten him. Most of his hair was removed and the remainder dyed white to help the disguise. He returned to take control of the town as soon as his scars had healed. He has already sent secret, coded emails to Justin Trudeau about his success. The giveaway is the Liberal red in his tie, and his resemblance to his sister. 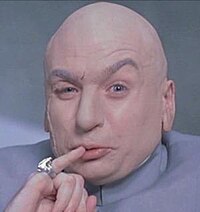 2. He is actually Ed Houghton. The former interim CAO left the job this spring to spend several months at a private golf-casino destination resort in Florida, funded by Powerstream, Collus dividend funds, Sprung and casino-resort developers, where he basked in the sun on a Crispy-Creme-and-rum diet while singing karaoke. He engaged the services of a skilled Liberal make-up artist to cunningly alter his appearance so he could make a come back without being recognized. His facial hair and much of his head hair was removed, but the colour is natural, just allowed to grow in. Ed was inspired to return by reading a book on Richard Nixon while on holiday, a parting gift from a former mayor when Ed resigned in April.

3. He is actually Ian Adams’ clone. Unable to both run the paper and take on the role of the town’s communication officer simultaneously, Adams was cloned in a secret mycological laboratory hidden in the bowels of the grain elevators, the expensive process funded by money secretly diverted from the Collus dividend payment and by casino-resort developers. Unfortunately, during the process, a clumsy scientist with Liberal leanings (his hands made shaky by his gambling addiction) accidentally injected too much of the maturity gene into the mixture. The cloned Adams emerged from the cocoon older than intended. That forced council to offer him a somewhat more advanced position than originally intended. To further disguise his likeness, he dressed in a suit and tie instead of his signature ball cap and T-shirt, but his brawny paddler’s biceps give him away. 4. He is actually Toronto Mayor Rob Ford, released from a six-week mandatory stay at a local Tory health spa and recuperation clinic where he was slimmed down, food stains removed from his clothes, and made presentable. Unwilling to return to Toronto and face the incessant badgering of the media and his council, the stressed-out Ford disguised himself as an older man and applied for the job of interim CAO. There he will be able to wield power incognito and undermine local Liberals and lobbyists from within town hall. His first task will be to find a position for his brother, Doug, as the town’s communications officer. He also plans to move his regular radio show to the Peak, starting in September. The giveaway is the Tory blue in his tie. 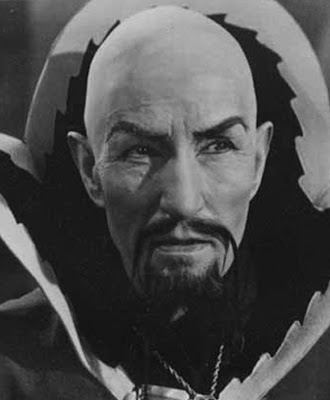 5. It’s actually Peter Dunbar, but his changed appearance is the result of torture at the hands of Ming the Merciless. Peter had been secretly building a time machine in the town’s heritage grain elevators as part of a secret Liberal-mushroom farm program to control the world. The device depends on carefully situated, large metal antennae situated on Ley Lines within the town (slyly disguised as the metal frames for the new Sprung recreational buildings). However, the aerial in the rink facility was slightly misaligned when it was raised to sit above the flood plain (a last-minute change forced on the builders by a cunning media blogger), causing the time machine to send him further into the future than planned. His first experimental trip landed him many thousands of years ahead, in the domain of the evil Ming, where Conservatives rule the world with an iron fist. Ming held him hostage and subjected him to years of severe torture by attack ads that altered his appearance. Only after a daring effort was he able to escape and use the time machine to return to his own era, although he arrived much aged and physically altered by his years of captivity. To make sure no one bought the terminals while he tuned the machine for his next voyage to stop the Harperites from dominating the future, the mayor made him CAO. The giveaway was the town’s revised naming policy that requires any new recreational facility or park name to start with the words, “The Peter Dunbar…”

The actor chosen, feeling greatly stressed by the incessant demands of Hollywood’s filming schedule, decided to go for a career change where their talents could shine. He wanted a position without the exposure to the invasive paparazzi and the envious bloggers who incessantly target the glitterati with unfounded allegations, innuendo and gossip.He contacted (Select one: Ed Houghton, a former mayor, a former CAO, a local resort developer, or Paul Bonwick) to discuss opportunities here. After a vacation at a secluded destination-casino resort secretly funded by (Select at least one: the Collus fund, Powerstream, Sprung, the mayor’s slush fund, the Liberal party, a local resort developer, or Paul Bonwick), and a rushed course in civic administration taught by (Select one: a former CAO, a former mayor, Ed Houghton, or Paul Bonwick) at the local George Brown campus (from which came the giveaway pseudonym), the actor approached council for an opportunity to practice his new job skills and hone his abilities for a bigger municipal role in future. Hollywood makeup artists helped create the impression of an older, shorter man. The green skin was eschewed as too telling.

And the least likely of all:

7. He is actually John Brown… a man with his own agenda mostly unknown to the rest of the town and council. A man who sued his former employer for $4 million. Hiring him may have not been the best decision the last council ever made. Extending his contract was, so far, the worst decision the current council has ever made.

Take your pick, conspiracy theorists and bloggers. No, don’t thank me. I am at your service. I can only apologize that I could not effectively work into these theories your notions on chemtrails, vaccinations, the Face on Mars, UFO abductions, psychics, homeopathy and the New World Order.

(PS. My apologies to all these wonderful, worthy people who I have named here. It’s not meant as a sign of disrespect, just a wee bit of humour.)