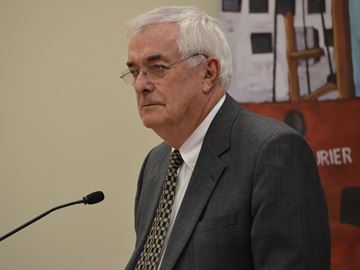 Collingwood Council has apparently decided it is better to be viewed as hypocritical than as unethical. Following a year of investigations of council behaviour by the Integrity Commissioner, Robert Swayze, council decided that, rather than reform their collective behaviour, it was easier to dump the IC.

So no more pesky peering into how they conduct themselves or whether they are acting in the best public interest.

And yet most of those elected to council this term were among the group loudly demanding the last council hire an integrity commissioner to protect the public trust.

Is that hypocrisy? Some would think so.

The previous council suffered only one investigation in the year after it hired Robert Swayze. That was from a complaint filed by a campaign supporter of the current deputy mayor against the incumbent deputy mayor, weeks before the election.

Despite what many saw as clear political motivation for the complaint – the incident under investigation was already five months old, but the code says a complaint must occur within six weeks of the complaint – the IC chose to make it public on the eve of the election. He had the prerogative of delaying or dismissing any complaint clearly politically motivated. He chose not to do so, for reasons never revealed.

That had a lot of tongues wagging about the ethics of the IC himself.

This term, there have been numerous complaints about the ethical and moral behaviour of our council members. Since only those the IC decides should be commented on are made public, and the process is  – allegedly – confidential until a decision is made public, the actual number remains obscure. But since some bloggers have reported on investigations that have not been made public, confidentiality doesn’t apply to council telling its friends and supporters.

Only those decisions about Councillors Doherty and Fryer were made public, so I cannot confirm that there have been others. But if not, why would council drop the IC after only a year?

This continued public scrutiny of their behaviour so clearly annoyed the folks who ran on promises of “openness, transparency and accountability” that they decided not to suffer it any more. Scrutiny, openness, accountability and transparency were all sacrificed.

The IC was unceremoniously dumped. Say goodbye to integrity.

The town’s own website declares (without a trace of irony):

Accountability, transparency and openness are standards of good government that enhance public trust. They are achieved through the Town of Collingwood adopting measures ensuring, to the best of its ability, that all activities and services are undertaken utilizing a process that is open and accessible to its stakeholders. In addition, wherever possible, the Town of Collingwood will engage its stakeholders throughout its decision making process which will be open, visible and transparent to the public.

Open and accessible, as long as no one can investigate what we’re doing, it should say.

It comes as no real surprise. Council already modified its own code of conduct to duck out from under public scrutiny as much as possible. The new document was carefully worded to shirk the responsibility of openness and accountability, and remove from the IC the responsibility of investigating little more than the value of gifts council receives.

This new “informal” approach basically warns the public that council is clearly uninterested in being investigated, and wants to know who was complaining:

Any person or a representative of an organization who has identified or witnessed behaviour or an activity by a member of Council that they believe is in contravention of the Council Code of Conduct (the “Code”) may wish to address the prohibited behaviour or activity themselves as follows:

It adds – again with no evidence of irony – that it becomes incumbent on the public to personally discipline the errant councillor:

All persons and organizations are encouraged to initially pursue this informal complaint procedure as a means of stopping and remedying a behaviour or activity that is prohibited by the Code.

Now with the IC being given the boot, there is NO OTHER way to complain about a council member’s behaviour except publicly and “informally.” By going to the member and complaining one-on-one.

How transparent is that? Doesn’t it seem just a little like the public is being bullied into compliance? When you wave goodbye to the IC, wave goodbye to council’s integrity.