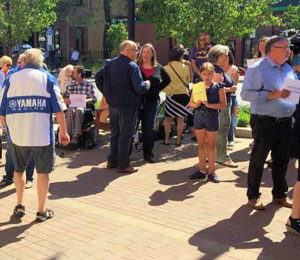 The dyspeptic Hate Brigade was back in front of town hall last night, stirred into another mindless frenzy by misleading media stories, innuendo, and conspiracy theory. (Okay: they don’t have an official name, but it was that or Brian’s Bullies…)

Last term Brian Saunderson and Steve Berman were the Hate Brigade’s leaders; now Saunderson is deputy mayor, so the public aspect of the dirty work falls to the slovenly mooch, Berman. 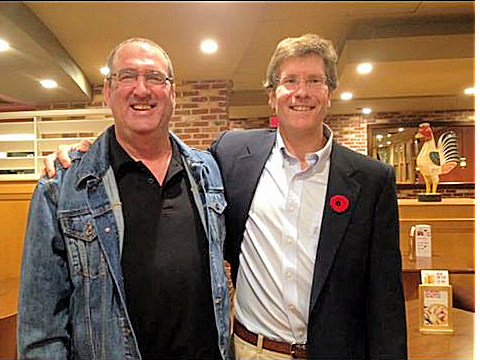 Saunderson made his cunningly timed appearance, entering the building to the anemic cheering of supporters; none of them apparently aware of how they’ve been duped over and over this term. Remember his promise of no sole-sourcing? Or public engagement in all major decisions? Now just shards among his many broken promises. Ah, the emperor was wearing his new clothes – at least to those of us with unblinkered eyes.

As expected, the abydocomist CBC released another story. That will be used to further the campaign efforts of those council candidates the CBC swears aren’t “friends” of anyone in the corporation. But CBC stories are looking more and more like the yellow journalism of Fox than actual journalism these days. Sad.*

The purpose of the Hate Brigade is not simply to protest any perceived wrongs: it’s to bully, intimidate, shame, insult and harass. These are tactics well-honed by both Saunderson and Berman last term. Followers are encouraged to wave poorly-written signs (who can forget Deb Doherty’s partner’s “inpeach council” sign last term?) and to send nasty or threatening emails to elected representatives and town officials.

For example, this one was recently sent to the mayor and copied to all of council and the CAO, from a fundraiser for Theatre Collingwood, who is also on the board of Collingwood Minor Hockey Association:

Given all the information that is now public – the Integrity Commissioners’ findings of your multiple conflicts of interest, the article below exposing corruption and the significant OPP investigation, you should resign as Mayor.
You have failed your councillors as a leader, you have been grossly negligent regarding your responsibilities and you have disgraced this community. You exploited your Mayoral position, denying an honest, democratic and transparent process to every resident of Collingwood. You should be ashamed.
Please do the right thing and hand in your resignation.
Jennifer Knight
Resident of Collingwood

Uli Rath – a well-known Saunderson supporter – was pictured waving a sign that was sort of readable (in a crayonish way). Saunderson’s bulldog, Mike Lewin, was there too. John Brown – the former interim CAO and arguably the most disliked person who has ever sat in the CAO’s office here – was in the crowd. Little wonder: Brown was the Palpatine Emperor to Saunderson’s Darth Vader. Saunderson voted to extended Browns’ contract twice – at more than $200,000 a year cost to taxpayers. Coming out to support the mob seems a small payback for Saunderson’s slavish support all those years. Jamie Berman – the longtime breadwinner in that household – was there chatting amiably to Brown.

All this over a four-year-old police file that doesn’t say the mayor did ANYTHING wrong. She’s hardly even mentioned. But it’s full of the sort of juicy allegation – all of it unproven, some of it demonstrably wrong – that the Hate Brigade feeds off. They’ve been told to hate the mayor’s brother, that he must be guilty of something even if none of them can identify just what. Doesn’t matter that the OPP didn’t charge anyone in five years, and are not going to. Haters gotta hate.

The OPP file is 219 pages long. I suggest few of the Hate Brigade would read a fraction of that. Their beloved Block councillors have proven themselves hard pressed to read anything longer than a sentence or two this term – 219 pages would be well outside their capacity to cope with. But so what? They’ll use it in their election platforms anyway, counting on the electorate not reading it either.

Once in council chambers, the mob was rude, obnoxious, uncivil, insulting, heckling, jeering, loud-mouthed: showing absolutely no respect for the mayor, or the process. This is the PUBLIC’s council chamber and the Hate Brigade treated it as disrespectfully as a smoker treats a sidewalk. They have no sense of pride in their own town, in their own facilities or even their own democracy. And no sense of maturity: a passel of two-year-olds is less rowdy and more civil. What a sorry example to set for your children.

There’s an Orwellian irony here: in the council chamber, Hate Brigaders held up signs saying (in all-caps because proper case is apparently too difficult to use…), “we demand honesty and integrity.” It’s ironic because not once did they protest the unethical and illegal behaviour of their anointed at the table. Not once did they protest being lied to by their chosen councillors – and they have had many, many opportunities to voice their concerns this term.

Orwellian because it’s newspeak. Obviously if they support The Block, they really demand secrecy and deception because they got it in spades this term. Honesty and integrity have been most noticeable in their absence among The Block. These signs must really have meant “Lie to us some more!”

Knight’s scurrilous letter whinges about “findings of your multiple conflicts of interest” which isn’t true, although facts have little role in the Hate Brigade’s agenda or fuming. There is a provincial law (the Municipal Conflict of Interest Act) which clearly states that siblings are not considered in determining conflicts within families.

But the mayor, to avoid such accusations, has stepped aside from every vote where her brother’s work was involved. Except one… because it was to hire a consultant for the town to oversee the airport sale. And when she tried to support council’s wishes, Berman crawled out from under his rock and filed a complaint against her. How petty, how nasty. How typical.

But why read the facts when you can rail and bully? Why examine the laws or the police report or the inconvenient truth when an angry ideology is easier to consume and regurgitate?

Knight says the mayor “exploited” her position – a nasty accusation that, were I the mayor, I would drag her into court over defamation and libel. The report clearly says council – including the mayor – was not informed about anything alleged in the file, so how could she exploit anything? In the past five years the police never even interviewed her or her brother. But hey: facts are for people who care about truth, not for haters.

And what “crime” is involved? None. Show me a single charge that resulted from five years of investigation. Show me the transcripts from a single court event where anyone was arraigned. Show me the police interviews with the mayor.There aren’t any.

This is how the Hate Brigade treats a woman who has dedicated more than 20 years to honourably serving the public. In fact, she’s the third generation in her family to sit on council. But haters gotta hate. And while they’re at it, they like to use gang-like bully tactics to intimidate and harass her. All that fine talk about no tolerance for bullying in town – we didn’t hear a single member of The Block speak out against it last night. Why? Because it suited their purposes.

Last council we voted NOT to build the $35 million rec palace Saunderson wanted and then turn it over to the YMCA. The Hate Brigade won’t forgive that. They demanded taxpayers be put on the hook for the Y’s “Taj Mahal” building (it would have meant a 10% or more tax hike!). They demanded the town privatize its largest and most expensive rec facility – and get NOTHING in return. They demanded the town turn over the Curling Club – a heritage building – to the Y, and close the Eddie Bush Arena so there would be no alternative ice surface. AND they wanted taxpayers to pay the YMCA’s operating deficit for four years!

And when council said no, when council found a better option that didn’t cost taxpayers and which kept the facilities in public hands, the Hate Brigade frothed and foamed and spewed accusatory letters like the harridan’s, above.

That’s what’s behind all this: Saunderson’s vindictive campaign to punish everyone even remotely involved with that decision. Berman is only his catspaw, a blunt, clumsy instrument used to deflect attention from the dissembling Saunderson.

Why didn’t any of the haters question whether it was ethical for a committee with a YMCA executive and Y members who sat as voting members of the committee to recommend building a new YMCA facility at taxpayer expense? Or ask who was promised a job managing the facility if it got pushed through? Because those questions might be uncomfortable for its co-chair, Saunderson?**

~~~~~
* CBC reporter Dave Seglins alleges he isn’t Saunderson’s friend, even though he admits to being friends with Saunderson’s employer. The CBC alleges his riding around town with Berman was just doing “noble” work. And Seglins – like Brutus – is an honourable man. And of course, all allegations must be true, otherwise the OPP file is just a four-year-old stack of paper.

The positive evils and dangers of the representative, as of every other form of government, may be reduced to two heads: first, general ignorance and incapacity, or, to speak more moderately, insufficient mental qualifications, in the controlling body; secondly, the danger of its being under the influence of interests not identical with the general welfare of the community.

Boy, did we get a lot of that this term: ignorance, incapacity, insufficient mental qualifications and interests hostile to the greater good. It’s tempting to think Mill must have foreseen Saunderson and his cabal when he wrote that! I’ll write more about Mill and the Block in a future post. Suffice to say, they have never read him.