I’ve always wondered why Lewis Carroll’s wonderful poem, The Hunting of the Snark – an Agony in Eight Fits – has never been redone, rewritten in a modern version, with modern references and people. It seems to lend itself to revision, at least to my eyes.

Perhaps it’s because this sort of whimsical, satirical poem is not popular these days (it was written between 1874 and 76, a decade after Alice’s Adventures in Wonderland, and three decades after Edward Lear’s Book of Nonsense).

Perhaps it’s because it’s a long poem, and reworking it all would be a considerable effort. After all, it’s roughly 4,400 words and you need to make it both scan and rhyme.

Perhaps it’s because of the language: a combination of formal and nonsense writing. Wikipedia reminds us Carroll borrowed from himself with eight portmanteau words he coined earlier:

Eight nonsense words from “Jabberwocky” appear in The Hunting of the Snark: bandersnatch, beamish, frumious, galumphing, jubjub, mimsiest (which previously appeared as mimsy in “Jabberwocky”), outgrabe and uffish.

The Jabberwocky, from Through The Looking Glass, was equally brilliant, perhaps more so because of its brevity. Who can forget those wildly imaginative immortal opening lines:

’Twas brillig, and the slithy toves
Did gyre and gimble in the wabe:
All mimsy were the borogoves,
And the mome raths outgrabe.

Perhaps it’s because Carroll was just too brilliant to imitate that these works have not been widely imitated or mimicked. Who, today, could out-Carroll Lewis Carroll with similar language and fancy?

Snark has been replicated in various – sometimes odd – ways, such as Mike Batt’s 1986 concept album, released as a musical on DVD in 2010. But these are tributes, not reinventions.

And what did Carroll himself mean by the poem? Is it just entertaining nonsense, or was it an allegory? Late in his life, Carroll “agreed with one interpretation of the poem as an allegory for the search for happiness.” Others have suggested it was:

So it’s pretty much open to interpretation. Reads always have to answer for themselves what or who the Snark represents – and what a Boojum really is. 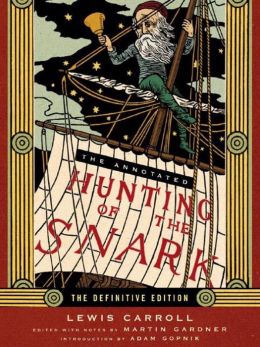 I was reading the late Martin Gardner’s excellent Annotated Hunting of the Snark, this week, and it made me wonder why this poem has not been reborn in newer versions, something that poked fun at modern conventions or issues. It has been redone with new illustrations, but not alternate text.

Why is nonsense so thrilling to read? How is it that words, arranged in patterns that obscure all easily discernible meaning, can still sound so right together? It’s this essential tension—between sound and sense—that has long drawn the young and the old to works by Lewis Carroll, master of nonsense and creator of rich imaginary worlds.

The poem opens with Fit The First: The Landing:

“Just the place for a Snark!” the Bellman cried,
As he landed his crew with care;
Supporting each man on the top of the tide
By a finger entwined in his hair.

The crew was complete: it included a Boots–
A maker of Bonnets and Hoods–
A Barrister, brought to arrange their disputes–
And a Broker, to value their goods. It’s full of great verses that are memorable even today and just beg to be melded with a modern – maybe political? – allegory:

He had bought a large map representing the sea,
Without the least vestige of land:
And the crew were much pleased when they found it to be
A map they could all understand.

Then the bowsprit got mixed with the rudder sometimes:
A thing, as the Bellman remarked,
That frequently happens in tropical climes,
When a vessel is, so to speak, “snarked.”

You just don’t get whimsy like that these days. Even our political satire is more pointed and, too often angry and bitter. Where is the lighthearted poke in the ribs?

Thinking of the current provincial election, or indeed any sort of Canadian partisan politics, if we tried our hand at poetry, we might get something like this (with apologies to Lewis Carroll):

“Just the place for a Liberal!” the Conservative cried,
As he marshalled his minions with pride;
Supporting each man with an Ipsos Reid poll
He told them who they should deride.

The crew was complete: the minions assembled;
Their attack ads were ready to run.
A Barrister, brought to ensure they dissembled,
Hoped Liberals would all come undone.

A Spin-doctor laid out the issues at hand,
Highlighting each Liberal’s flaws.
The saleswoman said these opinions were grand
And cunningly sharpened her claws.

There was also a Lapdog that fretted and paced,
And frequently voiced its concerns:
“We must make more haste, more haste!
And act ‘fore the enemy learns.”

There was one who was famed for the number of things
He hoped that the public forgave:
His past, his behaviour, his foolish mistakes –
And accept such excuses he gave.

He had forty-two policies, each one designed,
To undo what the Liberals had done.
He simply demanded the minions aligned
And approve each and every one.

Credibility wasn’t an issue, because
He had really had none left when he came,
Without moral baggage, the best of it was,
He had only the Liberals to blame.

He promised he wouldn’t be nasty or mean,
To those who’d been Liberals before;
As long as they passed his loyalty screen
And bowed deep when he passed through their door.

While, for those who preferred a more forcible word,
He used different names from these:
His intimate friends called him “Your Highness,”
And his enemies just “Little-cheese.”

“His form is ungainly–his intellect small–”
(The Liberals would often remark)
“His ideology’s rigid! And that, after all,
Pokes out Liberals’ eyes in the dark.”

He would spit at Liberals, returning their stare
With an impudent wag of the head.
“Your policies stink more than Tories can bear,
“I’ll reverse them myself,” he said. Well, that about exhausts today’s poetic effort (okay, it was a modest (cough, cough) attempt at best). Maybe I’ll work on the rest of the poem later – after tomorrow’s election. Well, maybe not: it’s not even a full fit and there are seven-and-a-half fits left to go…