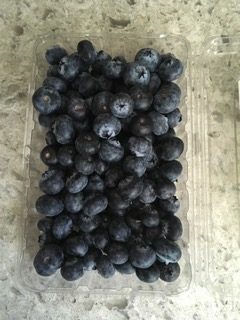 There was a cooler right at the front of the fruit and vegetable section of the local Walmart store packed with clear plastic containers of blueberries. Plump, dark, fresh-looking berries. And value-priced at $2.87 a container. I love blueberries on my morning cereal; these looked inviting, and so inexpensive! Who can resist such a bargain? I put a container in my shopping cart. Only when I got home did I read the label: product of Peru.

Peru lies more than 6,000 km away from me by air; more than eight hours’ flying time from Toronto, plus a two-hour drive north to here.  Not to mention the time to pick, package, sort, distribute, and shelve them. Yet here was a container of what appeared to be recently-picked blueberries selling for less than a cup of coffee, and less — perhaps less than half — than I usually pay at the local farmers’ market for a similar or even smaller amount. How can that be?

How is it possible to pick these fruit, wash, sort, package, refrigerate, ship to a warehouse, sort, distribute, ship to a store, then stock in that store for as little as $2.87? Along that route are hundreds of people, all of whom need to be paid, from pickers to loaders to pilots, drivers, and store personnel. There’s a whole chain of dependencies in getting them from Peru to my local grocery store while still edible, and a staggering cost in fuel.*

Peru, is, of course, just one South American country sending blueberries worldwide, but this year has become the largest exporter of blueberries: 165,000 metric tonnes in 2020, up from 120,000 in 2019. Half of which goes to the USA. Blueberries — native to North America, not Peru— are also grown in Mexico and South Africa. And how convenient for us here that they do so: we can enjoy these fresh fruit well outside our own limited growing season, as we do with so many other vegetables and fruit. And we can enjoy hundreds of others that can’t possibly grow here: limes, grapefruit, avocados, bananas, lychee, kiwi fruit; our grocery stores are well-stocked with all sorts of imports for our eating pleasures. And often so inexpensive.

Yet again: at what cost? Not to us, of course: our grocery and box stores are locked in a penny-pinching competition to offer us the lowest prices, to lure us in with bargains like these, understanding that while we’re here we’ll also buy more. Yet to enjoy our $2.87 package of ripe blueberries, we must accept that we benefit from the cheap labour and even poverty in the home countries where these are picked; wages we could not possibly live on here. And along with those low wages come predictable lower standards of health, quality, and safety: foods contaminated with pesticides and herbicides, or some noxious or even lethal bacteria are, sadly, rather too common (as of Oct. 9, 2020, the Canadian government site listed 4,012 food recalls; however not all of which are for imported produce). 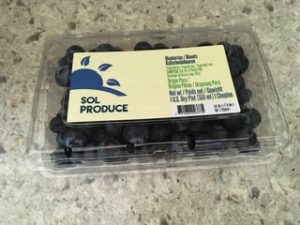 At the same time we also overlook the exporting nation’s lack of environmental protections or standards; their lack of labour benefits, unions, and child labour laws; the obese carbon footprint of shipping and distributing that far; the plastic waste from the packaging; and the inevitable waste from spoilage that ends up in the local landfill. Every such purchase is a silent compromise: because we don’t see most of it, we can turn a blind eye. It’s inconvenient to think about the real cost. Besides, we like being able to get out-of-season fruits and vegetables at any time of the year. In fact, our overall health as Canadians depends on it. If we had to depend on only local produce, our choices would be markedly limited, especially by the time planting season had come around again.

(The next week, the same cooler has been filled with similarly inexpensive containers full of ripe strawberries — also from a South American country. The price was again surprisingly low, making me think this cooler used was for loss-leader items rather than regular stock. I could still find blueberries from Peru there and in other local stores, but at a higher price for a smaller container. Was I upset paying $1 or more for half the weight? Not particularly: I generally don’t buy them more than once or twice a winter unless some remarkable sale is launched.)

Despite high markups on grocery items, the average industry profit margin is a mere 1.5%. A lot of the sale price goes to local wages, upkeep, spoilage, rents, administration, maintenance, etc., yet somehow families like the Westons manage to become filthy rich off it.

I would, however, prefer that a higher portion of the price went to the workers who picked the blueberries rather than the billionaire grocery store chain owners, but there is simply no mechanism for that. Minimum wage in Peru is about $284 USD a month; better than the minimum in Brazil and Colombia, but below another six South American nations. Even the highest — Chile — is a mere $437 USD a month.  Even the lowest minimum wage in Canada (Saskatchewan: $11.45/hour) earns more than double that. I would happily pay another $1 or $2 a container if I knew that it went to the pickers.

(I’d also pay a little more, too, to have them in recyclable or compostable cardboard rather than plastic; we bring our own bags when we shop to avoid having to use their plastic bags. However, there are far too many pre-packaged goods among our purchases for this to have more than a modest effect; but it does make us feel better for the effort.)

Blueberries are simply one item, but are a synecdoche for the whole cheap-food, cheap-product, discount sales, bargain pricing culture. We rely on cheap labour outside our borders so we can buy more stuff here, but at the same time, we’ve lost manufacturing and agricultural jobs to other nations because of it. Try to find a kitchen appliance, TV set, DVD player, power tool, appliance or car part that is still manufactured here, in North America, let alone in Canada (personally, I won’t buy American-made products — including wines — until the current fascist regime is defeated and democracy restored).

We try to buy local whenever and wherever we can — if not regional, we look for provincial and then Canadian products — but it’s difficult: the selections are limited and often more expensive (with, perhaps, the exception of beer and wine). My conscience wavers when I see blueberries from Peru. If I buy them am I supporting a growing Peruvian (or elsewhere) economy that offers growing employment opportunities in a developing nation? Will these opportunities blossom and help lift the people from poverty into sustainable economies? Or am I merely supporting an imperialist, corporate-driven system more focused on shareholder returns and billionaires’ profits than the welfare and well-being of the nations and peoples at their beck and call?

* I was told many years ago that my great-grandfather — whom I recall only meeting once, when I was very young — would not eat bananas because he didn’t like the way they looked. I understand that much better now: he was born many years before, in the mid-19th century, long refrigeration, before cars, trucks, planes, and even steamships. It was an age when fruit and vegetables ripened, often rapidly even when picked green, during their long journeys to distant lands like Canada or England, where he was originally from. He would have seen unappealling soft, likely blackened-skin bananas, not the green or light yellow ones we see in our supermarkets. He never saw more than a small fraction of the produce we see every time we shop, never held an avocado and wondered that only a few days earlier it had been hanging from a tree in a tropical land.