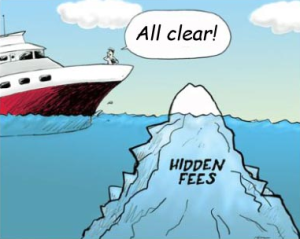 Former councillor Tim Fryer is back on the agenda this coming week, making another delegation to the Strategic Initiatives Standing Committee about the true costs of the judicial inquiry (aka the Saunderson Vindictive Judicial Inquiry, or SVJI). I admire Tim’s tenacity at trying to get the truth out to the public about this debacle. My respect for him has risen considerably since he’s been off council, but I wish he had been such a bulldog for the truth when he was at the table (I wrote about Fryer’s last appearance in front of the committee here).

At the very end of the agenda, you can read Tim’s letter, starting on page 161* and continuing through page 166. What’s most interesting is that he included a letter from the town to EPCOR, included on pages 163 and 164. That letter shows the town agreed to pay EPCOR’s legal costs over the SVJI of $250,000 or more. Yet those costs do not show up on the town’s most recent official accounting of the costs for the SVJI (read it here) **

For a council eager to “fact-check” residents’ comments and letters so they conform to the party line, it seems highly hypocritical to find that the town itself isn’t forthcoming about the facts. Yet we now learn that $250,000 was mysteriously left out of the calculations. As Fryer writes,

I figured if a $4 Walmart or $8 Tim Horton’s expense charge could be included then certainly something like the $250,000 or more of EPCOR’s legal expense coverage, as per the Side Letter Agreement terms established with council after the CJI was initiated, should be too.

So it seems a secret deal was cut to “mitigate all JI [Judicial Inquiry] Legal Expenses” and “which mitigation shall include continuing to pursue reduction and/or recovery of such [Judicial Inquiry] Legal Expenses pursuant to any and all insurance coverage, including MEARIE, in favour of the Collus Corporations …” Just one more closed-door machination by the secretive 2014-18 council.

Someone on the current council, it seems, has not been telling the public the truth about the costs. Surprised? Neither am I, given who got elected back in 2018. Most of our council was also on the town’s most secretive, deceptive council in its history, from 2014-18, during which they sold off public assets without any public consultation, appointed numerous sole-sourced lawyers and consultants without the proper tendering process***, and blocked the hospital’s redevelopment after discussions in closed-door meetings.

But surely you ask “What about that statement made by Councillor Berman when he made the motion for “fact-checking”? At that time he said:

“All I wanted to do is our small part … to stop the spread of misinformation.”

That sounds remarkably like bullshit now we learn that the “official” $8.2 million cost should really have been shown as $8.5 million or more. But wait, there’s more: we still have to add in the $700,000 of your taxes staff are spending on the as-important-as-clean-drinking-water-report-about-the-report. That means we’re already $1 million more than what the town admits to spending. And if we add in the costs of the improperly, sole-sourced consultants and lawyers who were appointed to set up the inquiry***, and the unaccounted costs of staff time and expenses to accommodate the inquiry, I’d say the real costs were MORE THAN $10 million.

Want to bet Fryer gets “fact-checked” when he tries to raise the real costs?

Don’t forget to add in the costs of having the town’s legal team for the inquiry come to council to justify the costs, back in February. That surely cost taxpayers several thousand more dollars, from which we get no noticeable benefit.

Fryer wants an “independent analysis [to] be conducted as a next best step to ensure that Collingwood taxpayers are fully informed.” I agree: the public has the right to know how much of our tax dollars were spent on the SVJI instead of fixing our decaying roads and crumbling sidewalks.

But somehow I doubt this council, with its past history of secrecy and deception, with its history of so many closed-door meetings, will want actual facts to be presented for public scrutiny. Besides, it might reflect negatively on our mayor’s reputation while he actively seeks to get out of his commitment to the electorate and take another job (while, of course, he expects taxpayers to continue to pay him for the job he doesn’t want).

* I find it risible that anyone expects this council to read 170 pages of an agenda (of which 130 pages are for a single report, and 20 are for another) when the majority have shown themselves averse to reading anything. No doubt there will be PowerPoint presentations with bullet points in big fonts, and plenty of pie charts to dumb it down for them. Keep in mind, too that these reports will be presented at this committee, then bumped up to the council meeting where they will be presented all over again. This redundancy has been brought to you by Collingwood’s broken committee system.

** The last “official” report on the costs is from mid-December, 2020. As far as I know, it has not been updated, despite the public outcry for full and honest accounting of the costs and all council’s bloviations about their alleged allegiance to facts. Other invoices have since come in, putting the total up to approx. $8.2 million, and yet there is no official statement that more invoices are not expected even at this late date. Where, oh where, is the document laying out the real costs of the SVJI as of today? PS: I’m curious what the SVJI got for $3,141.72 at Happenings Party Rentals. Balloons? Party hats? Noisemakers? Were the lawyers celebrating how much money they raked in during the process? ($4.56 million, plus $1.02 million for legal investigators, or about 68 percent of the total)

*** This council is still playing at its old tricks from 2014-18: in 2020 alone, they approved 30 sole-sourced contracts or purchases, including almost $300,000 for playground equipment, All the while they show their blatant hypocrisy when they criticize the 2010-14 council for issuing just one. But then it’s always been a do-as-I-say-not-as-I-do bunch at the table.