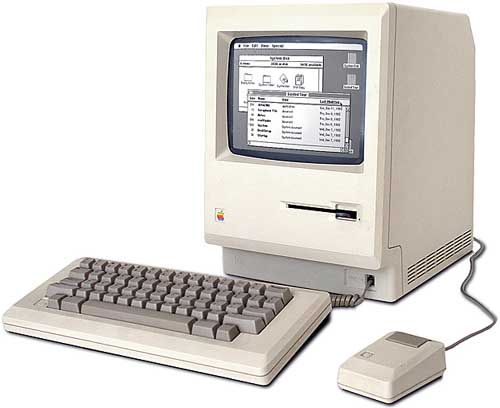 A recent article on Gizmodo shows off some previously unseen (or perhaps just forgotten) footage of a young Steve Jobs unveiling the Macintosh computer, back on January 30, 1984.

Thirty years ago, this week.

Seems like forever ago. But I remember it, and reasonably well. I remember where I was living then, what I was working on, and who I was with (I’m still with her…)

The video clip also includes the famous Orwellian “1984” TV ad Apple used to launch the Mac. That’s worth watching for itself. It was a really cheeky ad, and generated a lot of chatter about marketing at the time. The clip includes other Mac ads you should watch.

I had a Mac around then, bought, as I recall, in late 84 or early 85. I had had a Lisa – the Mac’s unsuccessful predecessor – on loan for a few months in 83 or early 84. I wasn’t impressed with the Lisa, but the Mac really captivated me.

I also had an IBM PC, from 82 or 83, and never quite understood the anti-IBM sentiments Jobs and Apple promoted among users. But then PC users fought back just as adamantly over the superiority of their platform.

As a computer geek from way back, I just loved having any – every – computer. When I started computing, I lived in a two-bedroom apartment; the second (the Iarger of the two, of necessity) bedroom became a workroom filled with computers, books, manuals, printers, modems, tools, chips, soldering irons, cables, and printers. As a technical and documentation writer, I always had extra hardware and software on loan from manufacturers and distributors. I once described my room as looking like a “NASA launch site.”

When we eventually bought our own house, I had a room for my books and computers, too, although they tended to escape and overrun the rest of the house. Same thing has happened here, although the amount of hardware is much reduced from the glory days (more ukuleles today than computers).

But ever since my first computer, I have not been a day without at least one computer in the house, usually several.

By the time the Mac was released, I had been computing for more than six years. I bought my first computer in the fall of 1977, a TRS-80, and soon had several machines (an Apple in 79, an Atari 400 in 1980 and then an 800 in 81). I belonged to user groups, subscribed to at least a dozen computer magazines, and wrote for several, including one of the earliest columns on computer gaming (in Moves magazine). I attended many computer fests and exhibitions in Canada and the USA – in fact, I helped organize a microcomputer fair in Toronto, at the International Centre, in the mid-80s.

So I take some umbrage when I read this condescending snippet on Gizmodo:

30 years ago the landscape of personal computing was vastly different. That is to say, it hardly existed.

Hogwash. It was alive and well – thriving in its entrepreneurial glory. Only poorly-informed journalists who have not done their research would make such a claim. Or perhaps they are too young to know of the rich history of personal computing prior to their own acquisition of a device.

We would soon see both the Commodore Amiga and Atari ST 16-bit computers launched. Of which I had them all, and a few others passed through my hands in that time, too.

In the 80s, CompuServe dominated the field of online services with millions of customers as it spread. I was a sysop on CompuServe for many of those years. I even operated my own BBS for a while.

CompuServe was challenged – aggressively, but not very successfully – by several competitors in that decade including The Source and Delphi (I was later a sysop on Delphi, too, before moving to Collingwood). The 80s were the halcyon days of personal computing, at least for me and few million other aficionados. True, many of the early adopters were techies – often self-taught like I was – who liked tinkering, programming and doing some solder-jockeying. It wasn’t unlike the early days of the automobile, radio or flight in that respect.

My book on the Atari operating system (Mapping the Atari) was published in early 1983, revised in 85, and over its shelf life sold more than 60,000 copies to other Atari enthusiasts. Similar books (not by me) on the C64 sold even more. At one point, as book editor in a Canadian publishing firm, I quipped that you could print the words “Commodore 64” on a brick and sell thousands of them for $14.95.

In the 1980s, when the Mac was in development and then newly-launched, I was writing articles for computer magazines, and editing others. Microcomputers were hot, and sales were soaring and the market was alive and vital. *

There were literally millions of computer users by 1984. I suspect that most were likely in the home-hobby category with me, but the business user category was rapidly growing. I oversaw the implementation of computers – Macintoshes, in fact – in the editorial and design departments of a large Canadian publisher when I was myself an editor there, in the late 1980s.

It wasn’t all games, as some backward-looking articles would have you believe. Software for the commercial and business markets was already available. Word processors – Wordstar and Perfect Writer for example – spreadsheets – Visicalc and Quattro Pro – and databases – dBase II – were already on the market. The Kaypro came with a suite of products that included PerfectWriter, PerfectCalc, PerfectFiler, and PerfectSpeller.

When the Mac came along, a slew of desktop publishing and graphic design programs emerged.

The early personal computer industry was filled with eager, enthusiastic, engaged users, many of whom – again like me – learned to program for themselves, and often wrote code for other users, shared through hobbyist magazines and user groups – many of which later become commercial products and games.

The business/productivity software may have been limited in the density of features compared to today’s programs, but it was professional and competent and did everything the great majority of users needed from it. I still have files for books and articles I wrote using the early commercial word-processing software, albeit some are not easily read using today’s programs.

So when Steve Jobs got on stage, it was at the height of the exuberance for personal copmputing, not its dawn. Time Magazine gives a more knowledgeable description of the 1984 launch:

It’s January, 1984. Steve Jobs, nattily attired in a double-breasted suit, is demonstrating Apple’s breakthrough personal computer, Macintosh, before a packed room. He speaks alarmingly of a future controlled by IBM, and shows a dystopian commercial based on that theme. He says that the Mac is “insanely great” and plucks the diminutive machine from a bag; it talks for itself. Screens of a graphical user interface — something few people had seen at the time — swoop by. The theme from Chariots of Fire swells. Jobs beams, as only he could.

It was a turning point indeed, that launch, and Jobs was prescient about the future of the computing world.

By 1990, the computer world was firmly entrenched in the two camps – bifurcated by Microsoft (PCs  were no longer dominated by IBM, as different manufacturers took up the Windows platform, and DOS slowly receded) and Apple OS, each side with unique but similar (increasingly so) operating systems.

Yes, yes, Linux was there too, for many years (along with a few other Unix clones), and still putters long among techies and behind-the-scenes servers and Internet hardware, but it’s never been a significant commercial market.

Only within the last few years – since the introduction of the iPad and other tablets – have we seen a growth in OS-based systems: Android and iOS at the forefront, with a little bit of Windows 8 thrown in. It’s the one area where Microsoft has not dominated in the past two decades.

But back in 84… it was a world of a multiple OS’s, each manufacturer with its own. Programs wouldn’t run on other machines and there was even incompatibility between how disks were formatted and read. It was a Darwinian competition in the market. Eventually PCs came to dominate, with Apple as the smaller, but feistier rival. The Ataris, Kaypros, Acorns and Commodores vanished, driven to extinction like the pelycosaurs and labyrinthodonts of the Permian who gave way to the advanced creatures which would rule the Mesozoic.

Which in turn would give way to the mobile-and-tablet based competitors in today’s computing world. How primitive, how simple the Mac looks today, when it was the height of modernity when it was released.

What will people think in another 30 years, of today’s products? Will our iPads look quaintly outdated? Our laptops lumbering and awkwardly large? Will we smile knowingly, and a little condescendingly, at ads for today’s tablets, up there in 2044?

~~~~~
*  I was also a major contributor to Compute’s Third Book of Atari, another bestseller in the personal computer market. In the interview, I wrote that I submitted the book to Compute! in the fall of 83 – that’s my mistake. It was actually the fall of 82. The book was published in early 83.