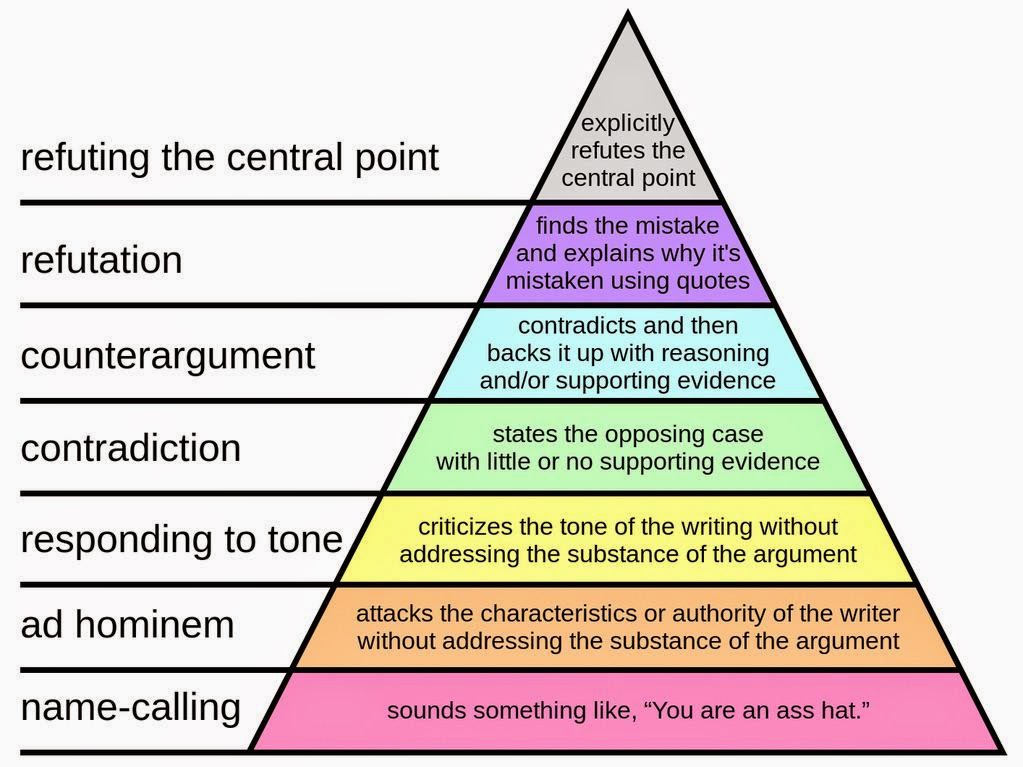 In January, 2015, Marie Snyder, on her blog, A Puff of Absurdity, raised the question of how free should speech be. I share her concerns about the apparent limitlessness of our rights: our right to free speech is not matched to any inherent responsibilities, civic or moral, to behave in a mature manner, nor does it require anyone to speak the truth. And we are not taught in our educational system either the basics of argument (in the classical sense), rhetoric or even manners and civility.

I don’t always agree with her positions (although I did like her take on Montaigne), but this one I agree wholeheartedly with:

People say some truly cruel things, and I’m not convinced we should have a right to be publicly malicious.

Many people feel they have that right. And they willingly and eagerly trespass well beyond basic civility into libel and slander – often telling outright lies (as we know from the local blogosphere) and engaging in vulgar insults and name calling.

Snyder is also concerned about the venomous nature of those attacks and the very personal nature of some of the comments, well outside the forum for civic debate. Those attacks erode the credibility of the attacker, but they also fuel an online hatefest as others pile into the virtual mosh pit to contribute their venom to the mob frenzy.

As the newspaper’s editor, I always believed that a politician’s stand, speeches, votes and ideologies are open territory for criticism. And that criticism should be fair, any claims based on documented facts, and disagreement always made respectfully and civilly. It should never descend into a personal, ad hominem attack. And to resort to vulgarity and name calling is the lowest of the low in the ladder of civic engagement. Snyder writes:

Venting and criticizing are two different things with a different purpose and, as such, deserve a different forum. Venting is what we do with a close friend listening privately; it has no place in a public debate. This distinction is all the more important when openly criticizing people in positions of power further down the line – like MPs that you’re likely to see in your grocery story, or local journalists, or even teachers who didn’t sign up to be in the public eye in the same way politicians and journalists do. With open access to an online forum seen by millions, it has become far more important to teach argumentation skills at a young age, and to offer reminders everywhere. But if we can’t teach people to stop venting in public places, to actually control their own outrage like a theoretical grown-up might do, then I think (big breath) we need to have some legislation in place to prevent or punish this action.

She strikes a key chord when she wants to limit malicious speech “… NOT from a fear of offending the sensitive who might be in need of some constructive criticism, but from a civilized distaste for causing unwarranted harm to other human beings.” Although how one can accomplish this is difficult to imagine.

And therein lies the rub: we may collectively not be that civilized, that mature, that cultured and that classy to recognize the distaste of such attacks. Yes, individuals may, but culturally and collectively we often seem to revel in the mud and choose the tinsel over the substance: the modern cult of anti-intellectualism directs us to embrace the lowest common denominator, which online is often the loudest, angriest voice in the pack.

The attacks and comments Snyder decries are the intellectual equivalent of litter. They are to social media what dog owners who don’t pick up after their pets are to your neighbourhood. You can legislate all you want, but people still leave their dog feces on the sidewalk because they feel entitled to do so. And they don’t give a damn about how you feel about it. Which is how many people feel about making malicious comments online. Cyberbullying is rampant because people feel they have the right to do so.

Of course, many people dissent, even loudly, in the media as well as online, without resort to maliciousness, innuendo, vulgarity or name-calling. But often the most effective dissent is through humour and satire – consider Rick Mercer’s contribution to the public dialogue. The emperor is most easily mocked without his imaginary new clothes by laughter than by pelting him with spume and spittle.

Back in 2009, former mayor George Cuff wrote a piece in Municipal World titled “Leaders Encourage Dissent.” In it, he wrote:

One of the greatest enemies of good governance is the notion that a successful council or board is marked by the absence of dissent.

In his article, he added that, “An argument without facts is ignorance; a challenge to the proffered position, based on solid thinking, is discussion.”

It’s the same on social media. Argue based on facts, based on alternative views, on different beliefs – but just to call names and attack your opponents is mere ignorance. Sadly, a lot of leaders and influencers have impressed on their followers the notion that dissent, even any form of disagreement, is treason. This then creates an environment where people feel galvanized to attack anyone outside their orthodoxy: their leaders endorse it.

I want to end the perception that free speech entitles us to say any moronic or caustic comment that comes to mind like some racist fraternity chants we’ve been hearing about lately.

Again, I agree. But civility, like manners, like respect, needs to be ingrained: it has to be taught from birth and through school, at the family table and in the classroom. That’s hard to do in our culture of entitlement, of consumerism and self-gratification.

This isn’t about dissent or the right to have an opinion: those are guaranteed by the Charter, although Harper’s Bill C-51 threatens to erode them significantly, if passed. It’s about how that opinion, that dissent, that disagreement is expressed: does it contribute to the public discussion, or it it simply venting? Engagement isn’t simply casting stones at one another: only through engaged and civil dialogue and debate can we progress.

It’s about respecting the rights of the other, respecting them as fellow humans, not just assuming you alone have the right to attack, to smear, to insult and to lie in the name of free speech.

Democracy depends on free speech and dissent. I have often written that how any government is measured is not how it treats consensus, but on how it treats dissent (see my blog post of May, 2009).  Debate, argument and criticism are all critical parts of the civic process – but for that process to be effective, we all need to agree to the basic rules of behaviour.