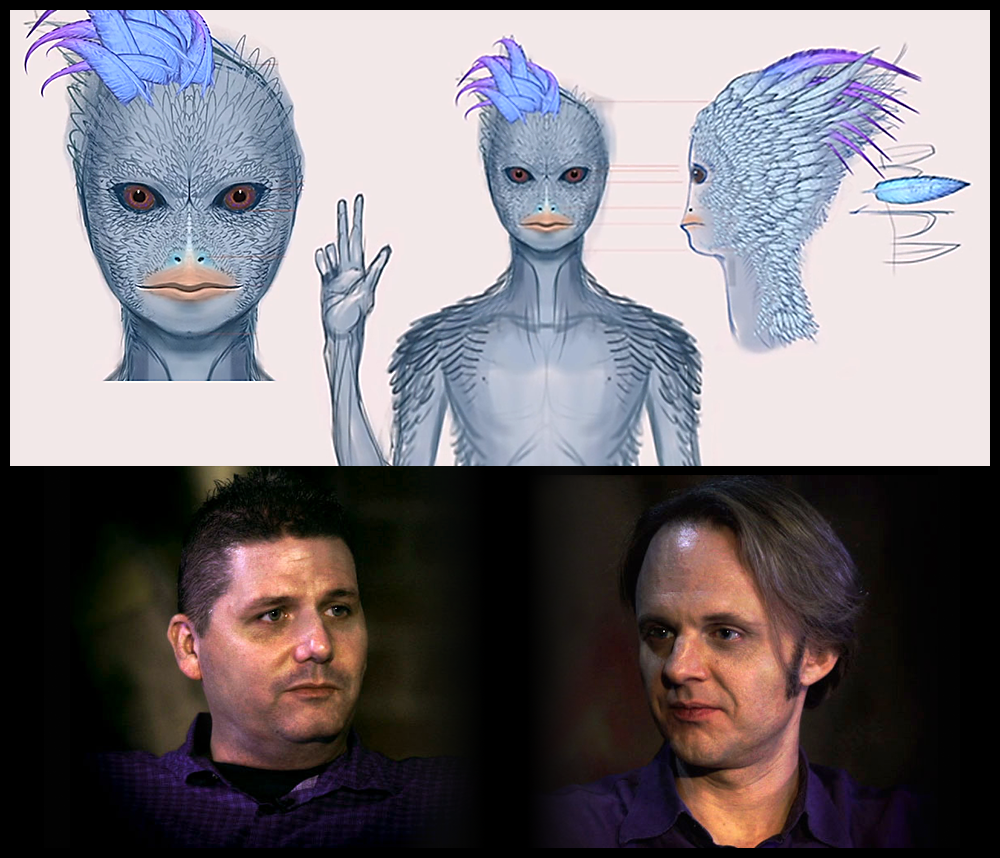 It’s just one more of those wingnut fantasy conspiracies that popped up on my Facebook feed recently. It’s not a new one: the old aliens-among-us nonsense just gets recycled and re-spewed by a whole new group of ignorati who follow the scam artists, hoaxers and charlatans who in turn make their living off this stuff.

This latest group is, apparently, led by two top wingnuts. If there was an army for wingnuts, they’d be five-star generals. One is Corey Goode, described as having…

…an extensive knowledge of the Off World Colony & Exchange Program, Secret Earth Governments, MILAB & Black Ops Programs, Corey Goode is here to expose the details from his 20 years of experience as an Operations Support Specialist in Special Access Programs.

Love that gibberish and the claims people make. But wait, it gets better. Goode is described on a site he co-authors as:

Identified as an intuitive empath (IE) with precognitive abilities, Corey Goode was recruited through one of the MILAB programs at the young age of six. Goode trained and served in the MILAB program from 1976-1986/87. Towards the end of his time as a MILAB he was assigned to an IE support role for a rotating Earth Delegate Seat (shared by secret earth government groups) in a “human-type” ET Super Federation Council.
MILAB is a term coined for the military abduction of a person that indoctrinates and trains them for any number of military black ops programs.

ROTFLOL. All that malarky packed into such a small space. But as silly as it seems to the literati, it nonetheless preys on the gullible (you know, the folks who are following Donald Trump right now…). But the gullible are, it seems eager for it. Like little birds cheeping for food, they demand more of this nonsense.

Here’s a few lines from an unrelated site, “dedicated to the teaching of knowledge that was hidden from the human race all through history” (nyuck, nyuck…) that is typical of this sort of mental constipation:

No man has ever ascended higher than 300 miles, if that high, above the Earth’s surface. No man has ever orbited, landed on, or walked upon the moon in any publicly known space program. If man has ever truly been to the moon it has been done in secret and with a far different technology.

The fake-Moon-landings crowd is still out there, frothing like this beside the truthers of 9/11, the Kennedy assassination, the Sandy Hook massacre and the Obama birthers.

Goode and Wilcox make their living from gullible idiots like this. Thanks to the internet, they and their compatriots in scam have a wide-reaching platform for their idiocy which, like ants to honey, attracts the hard-of-thinking.

Goode has a Facebook page for the “Sphere Being Alliance,” which is about as nutty as you can get and still be allowed out on day trips among the general population. It is self-described as…

Straight out of the fantasy and scifi pulp magazines of the 1920s and 30s, albeit with worse writers. One of the wacky notions this group has is the “hollow earth” – the same fictional fantasy written about more than a century ago by authors like Jules Verne and Edgar Rice Burroughs. Goode himself says of this looniness,

…instead of a hollow earth, we would call it more of a honeycomb earth. A large network of porous caverns that range larger than the size of Texas. Huge, huge caverns that run all the way, you know, to about 40 miles below the surface, the crust, where it goes down to the mantle.

Scientists and engineers drilling the deepest humans have ever penetrated into the earth’s crust encountered temperatures that would kill living creatures. At 12 km (7.5 miles), it was 180C. At 15 km, the estimate was for 300C. At 40 miles – the depth of Goode’s caverns full of beings – it would be 870C.

Goode fails to explain how creatures can live in temperatures that would melt copper,, zinc, bronze and even brass, a little deeper. Boiling blood? Not a problem!

Goode says he saw the interior of the earth through “smart glass pads” and “alien” technology which he says,

…are similar to tablet devices and connect to both ET and SSP databases that were full of information.

I know, I know. Get up off the floor. You can’t read the rest while you’re laughing so hard. He was probably looking at his iPad while stoned…

The second wingnut in this duo is David Wilcox (no relation to the Canadian rock and roll guitarist…), described as…

…a professional lecturer, researcher, and author David Wilcock is helping to expose the real history of humankind’s space explorations. He hosts Wisdom Teachings & Disclosure on Gaia and is an expert on consciousness science and new paradigms of matter and energy.

If those descriptions didn’t give this away as a bunch of flaky pseudoscience codswallop, then you’re drinking the kool-aid. “Wisdom” teachings? An “expert” on “consciousness science”? “New “paradigms of matter and energy”? Newspeak at its finest.

On one wackjob site, I found a piece about thee two titled, “Videos of Sleeping Giants In Stasis Chambers Ready To Awaken Whistleblower Claims.” Well, aside from not identifying who the “whistleblower” is, the piece describes this nuttiness like this:

According to Goode, there are several dozen sites on Earth containing so called “Stasis Beings”, who are apparently in a time dilation chamber able to slow down time relative to the outside world… According to Wilcock, some of these beings were either from ancient Atlantean era races or even ET’s who came to Earth to participate in the Solar and Planetary evolution taking place. This energetic upliftment is so powerful that it apparently draws the attention of many different ET races for various purposes.

And you thought homeopathy was the pinnacle of bunkum! This leaves it behind in the metaphorical dust. One of the many wingnutty sites that orbit this duo describes an interview with Wilcox and tosses in a bon mot about his co-conspiracy nutcase:

David Wilcock discusses new information revealing a blockade of our solar system by the space aliens group the “Blue Avian” who are associated with the Blue Sphere Alliance and how they began to arrive into our solar system since 1999. According to contactee Corey Goode, there are over 100 Blue Spheres helping our planet to push for complete disclosure and the release of suppressed technology. The Sphere Alliance is cooperating with an alliance of secret space programs indigenous to Earth.

Seems the Blue Avians are after our women. This site claims, “…Katy Perry has been in contact with the Blue Avians, as has Lady Gaga…” It also claims, “ake all the letters in “Bill Gates III” and convert each letter to the corresponding ASCII code (with the exception of the “III” which are all ones, Roman numerals). Then ADD them all up… you will get 666.” Ah, the old “666” conspiracy. So many conspiracies, and the lunatics feel they must promote them all…

Wilcox has an impressive resume chock full of utter uselessness and pathetic nonsense and reads like someone cobbled it together on acid after reading HP Lovecraft and RE Howard stories. Here’s a part of it:

David’s “graduate studies” with Higher Intelligence had already begun at age 20, by fully reading and absorbing an average of three metaphysical books per week; he integrated over 300 metaphysical titles between 1993 and 1995. David’s Internet research began in 1996, and soon replaced books as the predominant medium of study. Though Internet writing is often lower in quality than published books, it also contains much that cannot be found in libraries and bookstores, and the search functions are irreplaceable. We now have nine feet worth of books from printed website articles, which David organized with a binding machine…
Wilcock’s preliminary, direct contact with Higher Intelligence was through a quick burst of automatic writing, which occurred at age 22, in November of 1995. A very small number of characters gave a Bible citation that was highly synchronistic and meaningful to David at that time, even though he had never studied the Bible. Three years of daily dreamwork and intense metaphysical research helped “tune” his mind to receive this one brief message. However, there was still another year of work to be done before it could come through sustainably, in verbal form. During this year only dreams came through – no further messages or sentences.

I don’t get how anyone with any commonsense would swallow this codswallop, even a grain of it. Even a modicum of education would betray it as fantasy, and not even good, coherent fantasy at that. It reads more like puerile fan fiction based on someone’s better novels; the sort of adolescent stuff that young teens pump out.

I keep hoping, futilely it seems, that the perpetrators are going to suddenly shout, “We’re joking! It’s all been an elaborate hoax and we were just pulling your leg!” And then everyone will get on with their business. But, sadly, it seems unlikely.

The internet isn’t to blame and more than print, radio or TV before it: it’s merely the vehicle to spread this stuff. Unscrupulous people have always used communication tools for their advantage. But the internet is faster and more insidious in spreading it than any technology before because it’s democratic: anyone can post online, can create a website, can make statements. There is no burden of proof, no fact checking outside our own experience.

It seems to be harder and harder to get people to think, to use their critical facilities and to analyse content instead of swallowing it whole. Some people would rather believe the patently absurd, even when it defies all logic and common sense, instead of the more mundane truth. And it seems increasingly difficult to convince people that those behind this codswallop are just con artists out to scam money from the gullible.