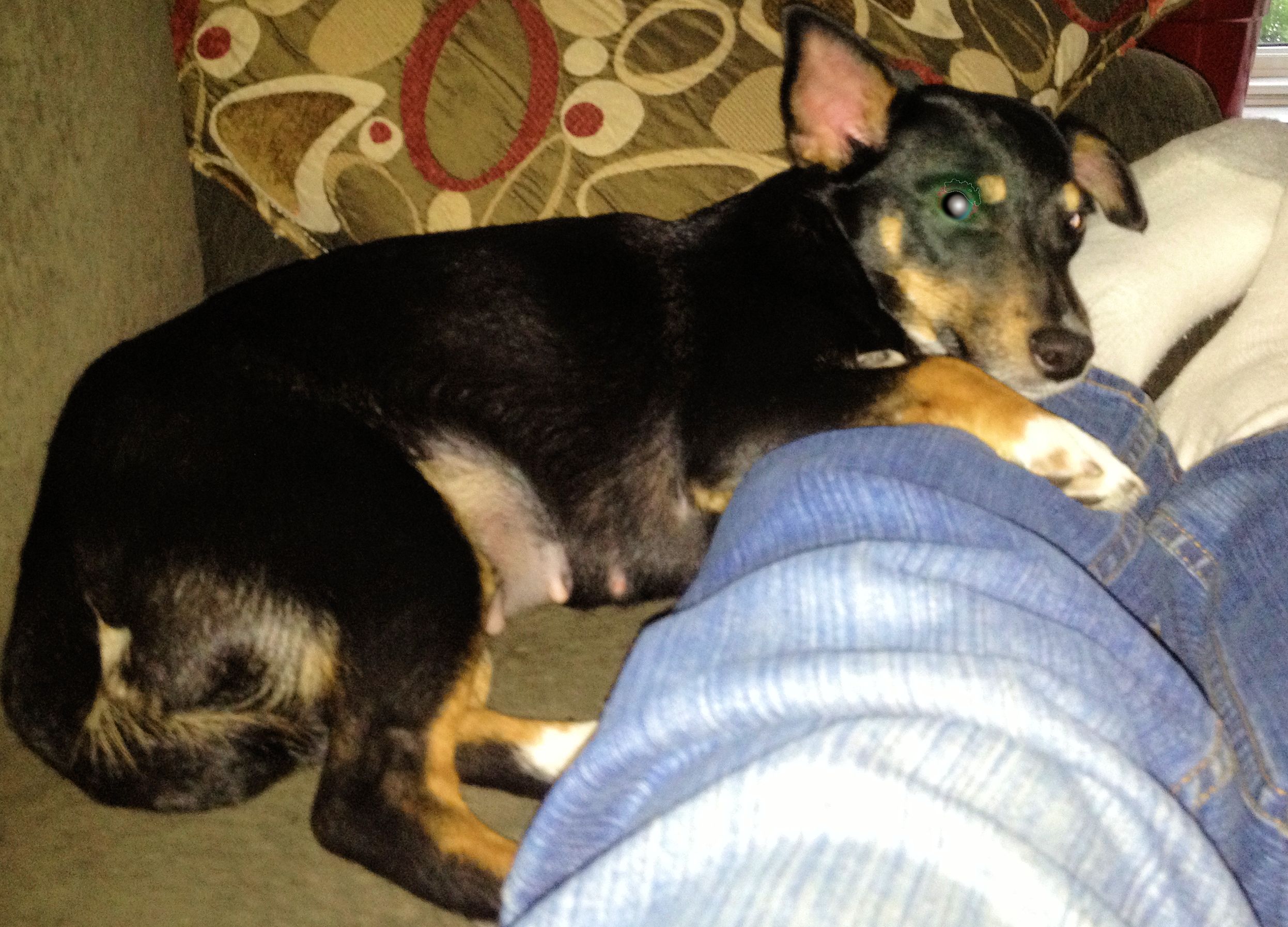 Dogs. I love dogs. I’d have a dozen of them, if I could. But dogs are as different in personality as we are. Not all dogs are a good fit with other dogs, or even with people. Or with cats. And I love cats as much, if not more, than dogs. Still, I tend to have more issues with dog owners than with their dogs.*

That little mutt curled up on my leg is Bella, our newest rescue dog. She’s a 2-year-old Jack Russell-Chihuahua mix, which apparently is a recognized mix according to this dog breed site. Given the range of shapes, colours and sizes in the photos there, I think “mutt” is still a more apt description.

Jack Russells are members of the terrier family. That’s short for terrorist, I’m sure. According to Wikipedia,

Jack Russells tend to be extremely intelligent, athletic, fearless, and vocal dogs. It is not uncommon for these dogs to become moody or destructive if not properly stimulated and exercised, as they have a tendency to bore easily and will often create their own fun when left alone to entertain themselves.
Their high energy and drive make these dogs ideally suited to a number of different dog sports such as flyball or agility. Obedience classes are also recommended to potential owners, as Jack Russells can be stubborn at times and aggressive towards other animals and humans if not properly socialized. Despite their small size, these dogs are not recommended for the condominium or apartment dweller unless the owner is ready to take on the daunting task of providing the dog with the necessary amount of exercise and stimulation. They have a tremendous amount of energy for their size, a fact which can sometimes lead to trouble involving larger animals. They may seem never to tire and will still be energetic after their owner has called it a day. While socialised members of the breed are friendly towards children, they will not tolerate abuse even if it is unintentional.

I have some lengthy experience with dogs – not only owning many since childhood, but participating n training, acting as an animal behaviour consultant, doing foster care for rescue clubs before moving here, and reading extensively about dog behaviour and intelligence since.

As a result, I tend to go for less temperamental dogs. Retrievers, Shelties, for example. Not madly-running-about-crazy-as-a-loon terriers. 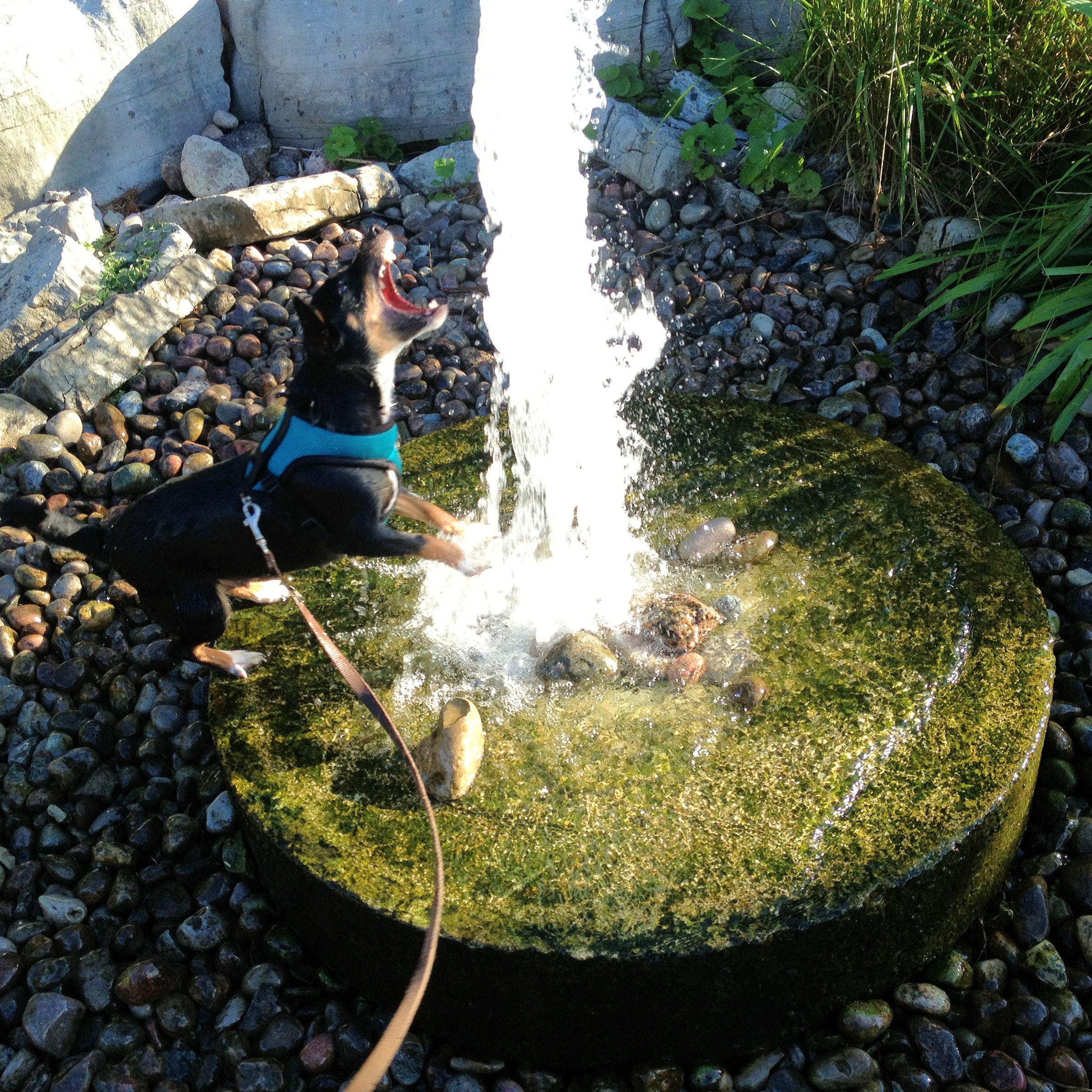 Terriers; I’ve fostered a few. Wonderful, independent, smart and bloody-minded. They have a genetic design in them that makes them chase things, bred into them for centuries. Anything, as long as it moves. And sometimes when they catch it, their hunting instinct takes over. Terriers can become terrorists.

So we have to think about our four cats. Those who are calm and ignore Bella, are probably fine. Those who run and hide – well, we have some training to do. Bella needs to learn and the cats need to be able to trust her. Not an easy task.

See that photo on the right? That’s Bella attacking a water fountain. Just having a blast in the water – running in, jumping, splashing. Crazy. Fun to see, but a cautionary note for a house full of senior (and somewhat shy) cats.

We had a Chihuahua mix once. He, too, was a rescue, so I don’t know what the other part of him was. Possibly Pomeranian because Pico had a long, thick coat that suffered winters rather well. Unlike many Chis I’ve encountered, he was gregarious, smart, eager to meet others, fearless, and happy. In part, I think that has to do with being well trained and brought up with a Flat-coated Retriever and a Sheltie as companions. Why do some people neglect to train small dogs? 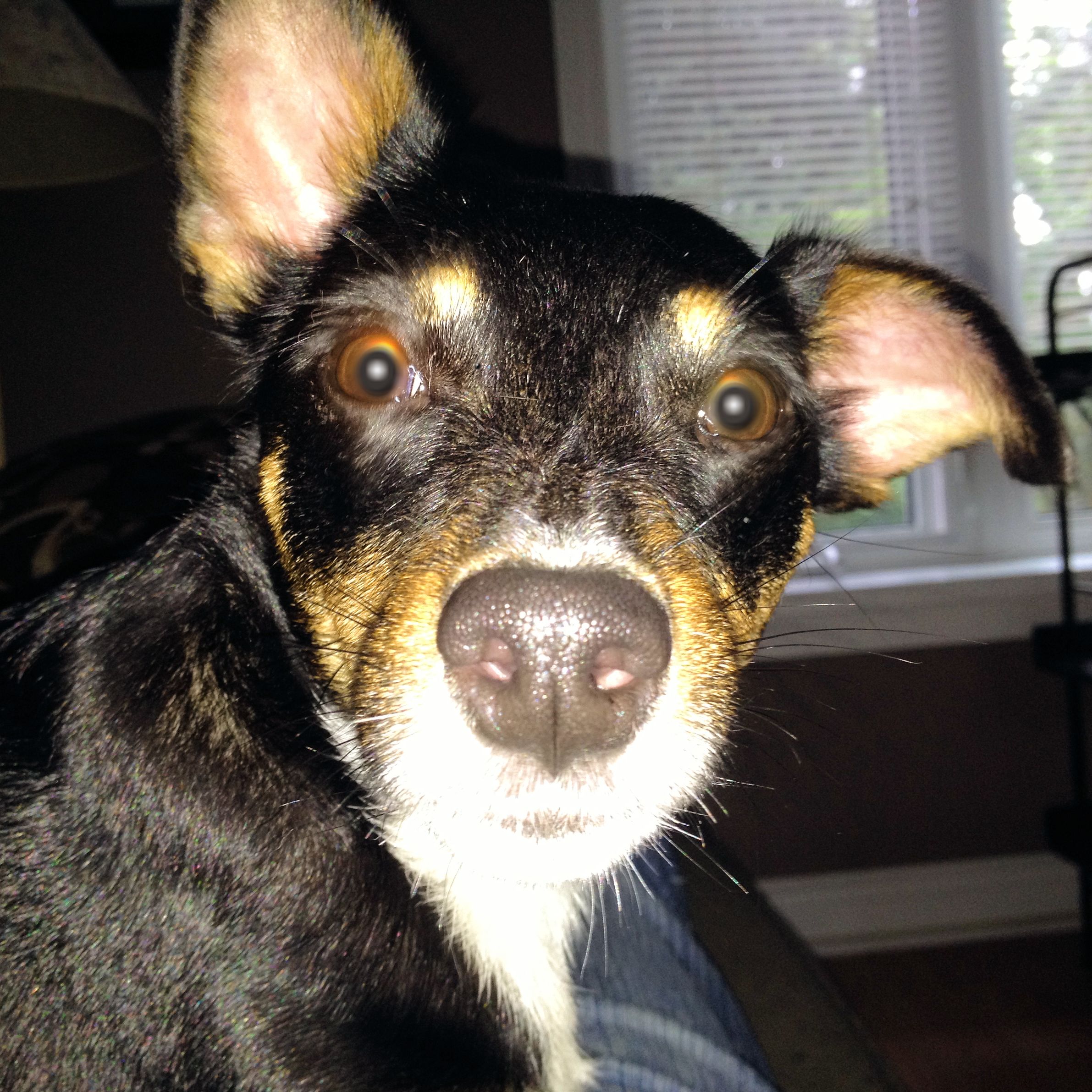 Pico was a bouncy, wound spring of energy, too, but not like a JRT. He was also much smaller – Bella weighs in at 7.5 kg. She needs some exercise because I think she should be under 7 for her size.

These JR-mix dogs all seem to have the same on-off switch for activity. It’s either on at full volume, or it’s off and they’re sleeping. Bella shows signs of that. I think I may be too old for a dog like that. She needs a lot more entertainment and exercise than I may be able to provide.

We got Bella from the Georgian Triangle Humane Society, Saturday. She had been spayed only a day or two before (looks like she had a litter previously).

Today I took her for her rabies shot and now have to go get a licence for her. The GTHS is a great place, by the way, staffed by a lot of amazing, dedicated and loving volunteers. I’d add a cat or two from their adoptable ones, but Susan says we have enough already. 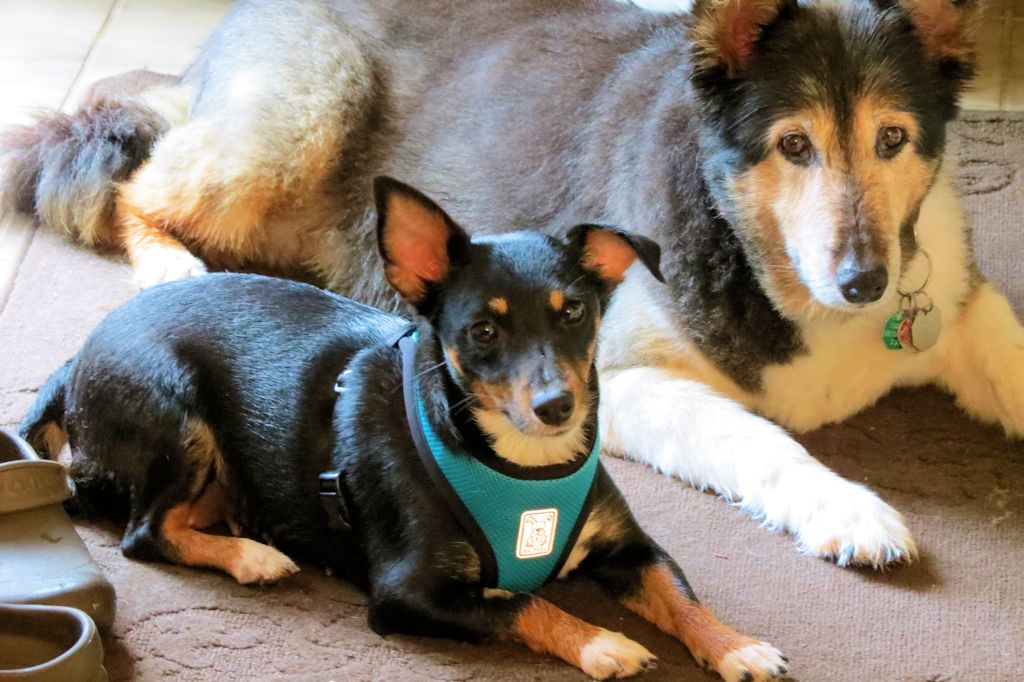 Back to Bella. We have her for 10 days (8 more), the standard trial period. It’s tough because she’s a real sweetie with us. Just a bit aggressive around the cats. Clearly she wasn’t raised with cats. The big tom, Diego, will teach her manners, but the others are smaller and less courageous. Bella has to be taught not to chase, not to nip at them. Can we bring the Chi into dominance over the JRT?

We got Bella because we wanted a companion for Sophie, our 12-13-year-old rescue dog, part Sheltie and getting slow. We thought a buddy might encourage her to play more. Not yet. Sophie is phlegmatic about Bella, not showing any real interest. Sophie is smart, well-behaved, gentle and calm. Bella is a tiny hurricane of energy and interest beside her. We’ve been looking for a companion for a couple of years – I hope we didn’t leave it too long.

She’s also a furniture dog, Bella I mean. We tolerate cats on the bed and sofa, but not dogs. Bella doesn’t understand. I have a dog bed by my side of our bed. Bella starts there, but lights go off and she’s up, snuggled against my legs. At least she doesn’t twitch. Maybe I can keep her off the dining room table – where the cats like to sleep

We’re not giving up. We like her: she’s affectionate and she’s pretty darn cute. She walks fairly well, albeit she clearly isn’t trained and doesn’t know basic commands like it, stay, paw and get your nose outta the garbage. But she catches intonation in your voice, so I think she’s smart.

We just have to figure out how to integrate her into our little family group and how to amuse her in a way that doesn’t involve cats. It’s a trial and we’re all made stronger, better, and wiser by what challenges us. As Nietzsche wrote in Twilight of the Idols, “What does not destroy me, makes me stronger.” I expect I’ll get pretty strong by the time this trial is over.

And at that, I’ll put down my virtual pen and take the dogs for a walk again.