Four hundred and twenty seven thousand, two hundred and sixty five. That’s how many documents have been submitted to the Saunderson Vindictive Judicial Inquiry (SVJI) to date, according to a story in Collingwood Today.*

There is no indication if more are expected after that, but it wasn’t ruled out, either.

More than 425,000 documents. The sheer volume is gobsmacking. Let’s take a look at what that might mean.

It isn’t specified if these are single or multiple page documents. We have to assume at least some are more than a single page. For the sake of easy calculations, let’s say 17% of them have two pages. That brings the number of pages up to 500,000. Now we need to do some calculations about just what the SVJI is doing to your tax dollars and the environment.

Start with a base measurement: a standard ream of 20-lb paper is 500 sheets. It measures (in imperial) 8.5 x 11 x 2 inches and weighs 5 lb. Heavier weight paper (24 and 28 lb.) result in thicker and heavier reams. I’ll translate those numbers to metric below.**

Five hundred thousand pages is 1,000 reams of paper. That stacks up to 2,000 inches or 166.7 feet (almost as many as I have feet of books in my home). Just a little wider than an American football field. Laid end-to-end it would be 917 feet long. It would weigh two and a half tons  – about what a mid-size pickup truck or SUV weighs.

According to the Sierra Club, that much paper would take 25-50 full-grown trees (an average 8-inch diameter trunk and height of about 45 feet) to produce – not taking into account any other environmental, industrial or energy impacts from cutting trees to produce the paper. Other sites suggest about 16-17 reams per tree (or about 60 trees to make 1,000 reams) 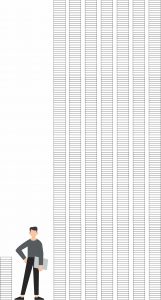 Paper is sold by the box of 5,000 sheets and the SVJI has 100 cases worth of paper in those documents (printed one-sided). The least expensive paper on the Staples.ca website sells for $54 for a box of low-grade copier paper, but it can rise to $70 or more for better quality paper (heavier, brighter). Assuming the town buys in bulk from a wholesaler, they may pay as little as $40 a case.

True, the SVJI did not generate these documents (although of course it will generate its own), but the majority of them came from tax-payer funded sources like the town and Collus and many are likely in digital form. So they cost you, the taxpayer, to produce and provide (even in digital form they took extensive staff time and resources to find, sort, collate and prepare – and lawyers in those institutions to oversee the process).

The SVJI staff may need to print some if not all of those documents at some point, plus its own documents assessing and judging the documentation. How many copies are needed? I don’t know; I’m not a lawyer, but I would expect that the SVJI will need at least one printed copy of everything for its records.

If printed double-sided as in a paperback book, this mountain of paper would consume more than 80 feet of bookshelf space, or approximately four full bookcases of the type commonly sold in box stores (with five four-foot shelves each).

The town will probably need to buy new shelves to store it so it can gather dust comfortably. Maybe Brian will want a second copy to put in the library – ka-ching!

And how will something this big be bound? You can’t just print it and staple the pages together in piles. Binding is another cost to consider! Large binders are not just expensive but also awkward to use.  Any sizable document needs a table of contents and maybe even an index. Who will prepare, collate and print those? How many more hours will taxpayers pay lawyers to do that?

It costs at least $0.01-$0.03 to print a single page in B&W on a typical copier,  and around $0.05 to $0.10 for colour (based on click charges, depending on contract). Not a lot – unless you’re printing 500,000 pages! Plus there are other costs to print beyond click charge: toner, electricity, copier lease, maintenance charges, staff time, etc.

So… if one set of everything is printed, I estimate it will cost $40,000 for the paper, $5,000 in print charges, plus binders, electricity, copier lease, toner and office space (but NOT including staff time). Let’s round it up to $50,000 for one printed copy.

How long does it take to read 500,000 pages? As I pointed out in my previous post about the SVJI, the average reader reads 200 words per minute, or two and a half uninterrupted minutes to read a single letter-sized page packed with text (comprehension, however, is actually lower, and may require re-reading). Assuming an average of 500 words per page, 500,000 pages translates into 250 million words. At 200 wpm, that requires 1.25 MILLION minutes to read everything. That’s 20,833 hours.

Now of course there may be fewer words on a page and some people read faster, but even at 100 words per page (a mere forty percent of the number of words an average email contains), it still takes 30 seconds for the average reader to read such a brief page. That still translates to almost 4,200 hours or about 120 weeks (at 35 hours a week) of work just to read. And we have to assume that once a document identified as relevant, more than one person will have to read it. So there will be an overlap of time and costs.

The online story tells us that in order to read this mountain of documents, the SVJI had to hire two more lawyers – who, if similar to those already on staff, will be paid somewhere between $400 and $700 an hour. Plus they need office space, furniture, phone, internet access, staff, and to get paid for any necessary travel and accommodations. Ka-ching!

It all adds up to a massive drain on the taxpayer to keep Saunderson’s Vindictive Judicial inquiry going (you can’t say afloat because it will be drowning in paper!). Keep in mind that this is the beginning of the process: the SVJI cash register is just getting warmed up.

And you elected this guy as your mayor.

~~~~~
* The story about this in the Collingwood Connection said… wait for it: nothing. No story at all. Surprised? Neither am I.

** Paper is still measured in inches in North America, even in metric Canada. In metric, a ream is 261 x 279 x 52 mm and weighs 2.268 kg. One thousand reams of 20-lb paper would be approx 52 m tall (packaging may slightly alter the height) and weigh 2,268 kg. The weight noted on a package of paper (commonly 20, 24, or 28 lb.) is actually the weight of 500 sheets of uncut stock (17 x 22 inches which gets cut into four letter-sized pages). Copier (bond) paper is almost always 20 lb. and performs adequately for one-sided printing. There’s also a GSM (grams/sq. metre) measurement for paper that manufacturers use, but you can look it up.

*** Nor does it even begin to measure the impact on the environment of all this. Walk down any town street or into any town park and count the number of fully-grown trees you see. The first 25 would be cut down to produce the paper required to print 500,000 pages. The second 25 could be chopped down too, if the first 25 didn’t provide the pulp mills with enough raw material for the job. But some sites suggest as many as 60 trees could be used for this amount of paper! Imagine the streets or the parks without those trees. That’s what the SVJI is doing to our environment! Sadly, the environment wasn’t even on the radar for those elected this term.