I had read about the “trolley problem” in the past, but not given it much thought until recently when I saw Thomas Cathcart’s little book of that name in the philosophy section of an Indigo bookstore. It’s subtitled, “Would You Throw the Fat Guy Off the bridge? A Philosophical Conundrum.”

I, of course, was so intrigued I had to buy it. I have read others of Cathcart’s books and liked his work in introducing/popularizing philosophical concepts.

The original trolley problem is a thought experiment that goes like this, as Wikipedia puts it:

There is a runaway trolley barrelling down the railway tracks. Ahead, on the tracks, there are five people tied up and unable to move. The trolley is headed straight for them. You are standing some distance off in the train yard, next to a lever. If you pull this lever, the trolley will switch to a different set of tracks. However, you notice that there is one person on the side track. You do not have the ability to operate the lever in a way that would cause the trolley to derail without loss of life (for example, holding the lever in an intermediate position so that the trolley goes between the two sets of tracks, or pulling the lever after the front wheels pass the switch, but before the rear wheels do). You have two options: (1) Do nothing, and the trolley kills the five people on the main track. (2) Pull the lever, diverting the trolley onto the side track where it will kill one person. Which is the correct choice? 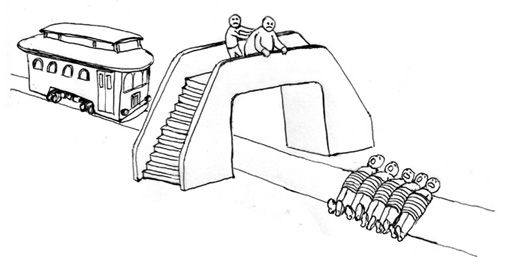 The original problem was devised by Philippa Foot in 1967. From there derive several variants with similar questions of ethical or moral dilemmas offering alternate scenarios. The one referred to in the book’s title adds this twist:

As before, a trolley is hurtling down a track towards five people. You are on a bridge under which it will pass, and you can stop it by dropping a heavy weight in front of it. As it happens, there is a very fat man next to you – your only way to stop the trolley is to push him over the bridge and onto the track, killing him to save five. Should you proceed?

Until I started reading and looking into it online, I hadn’t realized how much traction this question had gained as a philosophical debate. Philosophy Walk noted,

It is no small statement to say that it has vexed moral philosophy and ethics since its inception.

Nor was I aware of the many variations proposed that complicate the question and make clear answers increasingly difficult. What if the one person was someone very close to you – a family member, say – and the many were all strangers? Would that change your choice? What if it wasn’t one-versus-five lives but two-versus-five? Three-versus-five? Blogger Tristan Vick has broached that dimension by asking…

…the morally indifferent person can potentially save millions, while having only killed a few, thus realizing a greater moral good. Whereas the morally righteous person will be faced with the realization that they have allowed for millions upon millions of deaths because of their refusal to sacrifice one for the many. An act which no greater moral good can be found.
The question becomes, then, for the morally righteous person is this: what exact number of innocent deaths must we allow for, i.e. require, before it becomes morally permissible to push just one person onto the tracks? 1, 2, 3 deaths? 50? 1,000? 10,000?

I have also learned it has been translated to all sorts of areas and situations, including police work, surgery, and war. But the problem is still the same: in a situation where someone will die and someone will live by you action (or inaction), who do you chose to save, who to die? And what factors influence your decision?

Harvard University put a similar test online as an experiment that was supposed to run a few weeks, but has been going now for years. It’s called the Moral Sense Test. It offers several scenarios (read each one carefully before going to the next page) that all have some sort of life-death situation in which you have to choose.*

In fact, there are no simple answers to any of these questions; nothing that does not involve an ethical choice of saving and taking life. In an interview with Cathcart, he noted that in one online version of the trolley problem, 89 percent said it was okay to kill one person to save the many. The interviewer commented,

…it might be easy to answer that on the internet, but when actually presented in reality with a physical switch I’m sure that some people might just not do anything at all, in reality.

Of course, it’s merely a thought experiment, like Shrodinger’s Cat. None of us have to actually pull a switch. We only need to imagine doing so,

I wonder if the results have been altered by the increasing violence in our culture; in video games, in TV, in music and movies. In games, we not only imagine killing our foes, we kill them in a virtual universe. Of course, they don’t die like in real life any more than actors who are shot by the film’s protagonist die in real life. We suspend our sense of reality for these activities and accept the fantasy. It gets further confused when gaming death is easily mitigated by the mechanics of resurrection offered in many games. Do these factors affect the moral choices we make?

And how would this problem be perceived in another environment? In other cultures and religions? Would, say, Sri Lankan Buddhists make the same choices as Westerners? Would Sufis make the same choice as Catholics? Would the question produce a cryptic response from a Zen master like that of the koan of Joshu’s dog?

Sarah Bakewell (author of How to Live, a book on Montaigne I reviewed previously) wrote in the New York Times that, far from merely a thought experiment, trolleyology as applications in the real world:

Some find it frivolous: One philosopher is quoted as snapping, “I just don’t do trolleys.” But it really matters what we do in such situations, sometimes on a vast scale. In 1944, new German V-1 rockets started pounding the southern suburbs of London, though they were clearly aimed at more central areas. The British not only let the Germans think the rockets were on target, but used double agents to feed them information suggesting they should adjust their aim even farther south. The government deliberately placed southern suburbanites in danger, but one scientific adviser, whose own family lived in South London, estimated that some 10,000 lives were saved as a result. A still more momentous decision occurred the following year when America dropped atom bombs on Hiroshima and Nagasaki on the argument that a quick end to the war would save lives — and by macabre coincidence, the Nagasaki bomb was nicknamed Fat Man. Similar calculations are being made right now. One has only to think of collateral damage in military strikes, or of the justifications offered for torturing terrorism suspects. At their best, such reasonings are valid; at their worst, they are a writhing nest of weasels.

.
Philosophy Walk turns the problem on its head and puts the reader in the position of the fat man, asking:

Could you live in a society in which your life, at any moment, could be sacrificed to save the lives of a two people, one hundred, or even one thousand? Of course not. Working on a social structure comprised of organisms that have survived for millions of generations, nature has selected for the values and social norms that we currently enjoy.

And still others argue that the whole business of trolleyology is useless. In a recent article in The Atlantic magazine, Olga Khazan noted,

…one group of researchers thinks it might be time to retire the trolley. In an upcoming paper that will be published in Social and Personality Psychology Compass, Christopher Bauman of the University of California, Irvine, Peter McGraw of the University of Colorado, Boulder, and others argue that the dilemma is too silly and unrealistic to be applicable to real-life moral problems. Therefore, they contend, it doesn’t tell us as much about the human condition as we might hope.

However, the article concludes:

Joshua Greene, the Harvard researcher, told me that the trolley dilemma has been used to answer questions like, “Can visual imagery actually influence a moral judgment? Can a neurotransmitter have a directional influence on moral judgment? Could the language in which you read about a moral question influence your answer?” across dozens of published papers.
The trolley problems don’t tell us what we’d do if we actually faced an out-of-control streetcar, he argues, they just highlight subtle quirks of our internal moral GPS systems.
“It’s not ‘Let’s study trolley problems because they’re representative of problems we face in everyday life,'” Greene told me. “It’s ‘Here’s an interesting puzzle. If we follow it, we might learn something important.'”

For me, the problem raises some interesting questions about our own, deeply-held ethical views, about the sort of moral compass we each are guide by. Besides, I like thought experiments like these because they let me test myself in a mental sandbox. And it’s always good to test yourself.