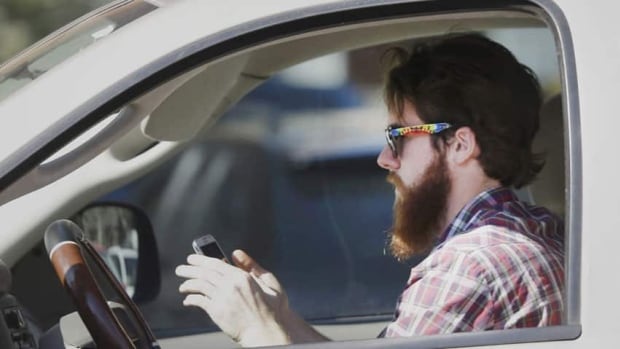 In March, the fine for being caught texting,  talking on your cell phone, or tinkering with your MP3 player while driving will jump from $155 to $280 in Ontario.

That’s better, but not good enough.

Distracted drivers are a growing threat to everyone sharing the road – other drivers, pedestrians, and cyclists. We are all at risk.

As the CBC reported:

The fine for distracted driving in Ontario will soon nearly double.

As of March 18, driving with the display screen of a phone, computer, MP3 player or tablet computer visible to the driver will jump to $280 from $155. The total includes a $25 victim surcharge and $5 court costs.

The fines will not apply to GPS screens.

It’s not enough. The legislation needs to be tougher. It needs to parallel the legislation about impaired driving, or street racing, with similar penalties and fines.

Curiously, as The Star notes, the provincial Liberals (an inconsistent and meandering party seemingly adrift the policy sea, but that’s another post…) didn’t support one of their own MPP’s private member’s bill which would have increased fines and added demerit points:

…the Liberals haven’t pushed a private member’s bill introduced last year by one of their own MPPs, Bas Balkissoon (Scarborough-Rouge River), calling for fines between $300 and $700 and demerit points after one of his constituents, a young mother and community volunteer, was killed by a distracted driver.
“This is a serious, serious community safety issue,” Balkissoon said. “One way or another, I’ll get it.”
He said he was concerned any legislation the government introduces could be delayed by a spring election, and also said he was “disappointed” Bonkalo set the fine at $280 and not his preferred level of $500, the Highway Traffic Act maximum.

So one has to question how seriously the Liberals take the problem.

As the Economist calls it, distracted driving is the “new drunk driving.”

THE driver who killed Jennifer Smith’s mother in 2008 by hitting her car at a crossroads was sober and had never received a speeding ticket. But he was talking on his mobile phone. He was so engrossed that when the policeman later asked him what colour the traffic light had been, the driver said he had not even seen one.

As the article notes, even hands-free devices add to distracted driving:

The human brain has to work harder to process language and communication with somebody who is not physically present. (Conversation with passengers is much less distracting, apparently because those passengers are also aware of the traffic situation and moderate their conversation.) A study by Carnegie Mellon University using brain imaging found that merely listening to somebody speak on the phone led to a 37% decrease in activity in the parietal lobe, where spatial tasks are processed. This suggests that hands-free use of mobile phones cannot help much. Such distractions, according to one study, make drivers more collision-prone than having a blood-alcohol level of .08%, the legal limit in America. It appears to raise the risk of an accident by four times. Texting multiplies the risk by several times again.

So we need some serious attention paid to technology and its social and cultural impact. One of the reasons our health care costs are skyrocketing seems to be easily found here: distracted drivers are causing an increasing number of accidents and deaths. 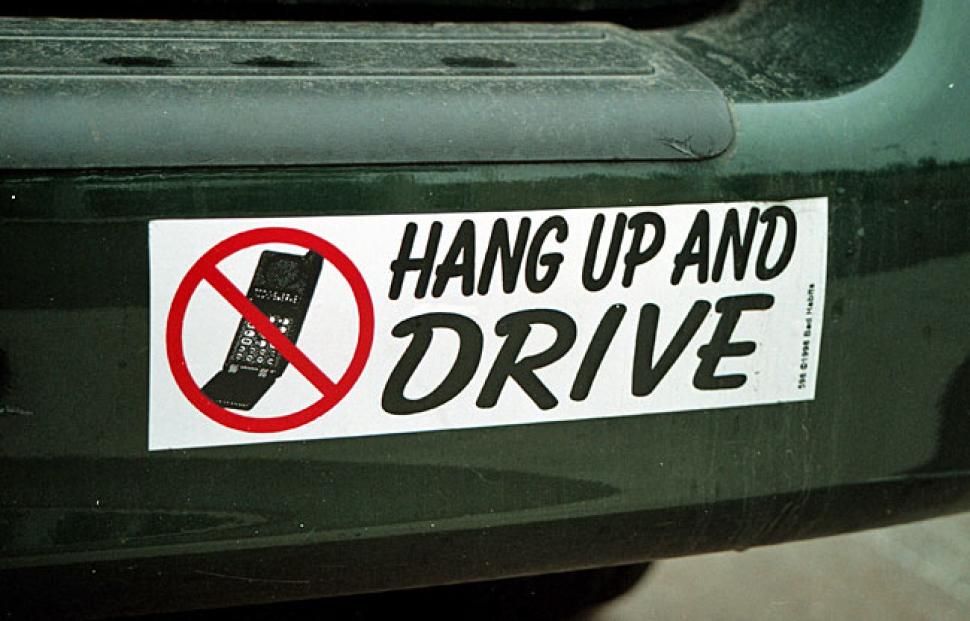 Simply raising the fine won’t change that. Paying $280 may be more of an annoyance to people than a real game changer.

Why don’t we treat it like street racing and stunt driving? That gets the driver an immediate suspension of his/her licence at the roadside, a minimum fine of $2,000, and it can be as high as $10,000. A street racing conviction can mean imprisonment for up to six months. It can also lead to a further suspension of the driver’s licence for up to two years for the first conviction and that can go as high as ten years for a second conviction! A convicted driver’s insurance rates increase 100% for the next three years, plus they get dinged six demerit points!

Now that’s a serious law. Distracted driving law? A slap on the wrist. The Ontario Ministry of Transportation’s own Road Safety Report for 2010 (the latest published) barely mentions distracted driving. Yet clearly the problem – and threat – is accelerating.

Every day I walk the local streets with my dogs, walk my wife to and from work, walk to the parks, shops or downtown. Many days I drive, too, but we walk more than drive.

Every day – every day – I see someone chatting on a cell phone, or looking away from the road at something in their laps or on a car seat, while driving. One hand on the wheel, the other holding a cell phone to their ear. Seldom looking right or left. Sometimes looking away for a significant time – I’ve seen cars travel a block with the driver not looking forward.

Many times I’ve almost been hit by drivers on cell phones not looking at the road or in their mirrors, usually while they were making turns at intersections or backing up. I don’t what the local statistics are for tickets handed out for distracted driving, but I hope they’ve been able to keep up with the problem.

If it’s this much of a local issue, if distracted driving is this frequent in a small town, it must be rampant in a large urban municipality like Toronto.

Other forms of distracted driving can result in a charge of Careless Driving with fines ranging from $400 to $2,000, a possible licence suspension of up to two years and/or a jail term of not more than six months.

The ban on cell phone use (not the hands-free devices) while driving was launched by Ontario’s Ministry of Transportation in late 2009. Although the fine doesn’t involve demerit points on your licence, it could lead to more, if the police press careless driving charges:

There are no demerit points associated with an offence, and police will not be confiscating any hand-held devices used by a driver caught breaking the law.

Drivers who endanger others because of any distraction, including hand-held and hands-free devices, may also still be charged with careless driving and will automatically receive six demerit points, fines up to $2,000 and/or a jail term of six months. In some cases, your licence may be suspended for up to two years. You may even be charged with dangerous driving (a criminal offence).

I’m not the only person who thinks there should be higher fines, plus both demerit points and device confiscation of someone caught texting or using mobile devices while driving (again, not the hands-free systems, although they too cause distractions).

A US Government site notes:

The CAA website on distracted driving also lists these statistics:

Drivers who are engaged in the following distractions are more likely to be in a crash or near crash event compared with non-distracted drivers.

In the USA, nine people are killed and 1,000 injured by distracted drivers every day. Every day.*

Citing a CDC report, the article goes on to note:

In Canada, according to the Star article, “The Insurance Bureau of Canada says drivers talking on the phone or texting now cause more deaths on Ontario roads than drunk drivers…” and “Distracted driving is one of the fastest-growing causes of death.”

So why isn’t the government taking it more seriously?

The article also notes distracted driving charges are increasing dramatically – which suggests the public either doesn’t get the severity of the problem and the threat it poses to public safety, or simply chooses self-indulgence over safety:

It’s not that talking on the phone per se is the culprit. According to a report from the Virginia Tech Transportation Institute (VTTI), it’s all the little things like typing, tapping the screen, grabbing the phone and looking at it while driving that causes the danger.**

Don’t forget that people also eat, play with their audio systems, talk to passengers, drink beverages, tinker with their GPS, watch their pets and do other distracting activities while driving. Texting, though, is seriously dangerous. Combined with other distractions, it can be – and has proven to be – deadly,

Several Pew Research studies have shown that teens (at least American teens), in particular, are texting while driving:

In a 2010 Pew Research Center survey, nearly half (47%) of adults who use text messaging (equivalent to 27% of all U.S. adults) said they had sent or received messages while driving. A 2009 survey found that 26% of 16- and 17-year-olds admitted to texting while behind the wheel.

Scary? That’s a definite yes! The government needs to take this far more seriously and the police need to ramp up enforcement throughout the province. We should have a zero tolerance policy for distracted driving – particularly texting – like we have for impaired driving.

Maybe a better idea would be a mandatory short-range cell-phone blocker device in all new, non-emergency vehicles; one that operated automatically while the vehicle was in motion. Not sure if that is technically feasible, but I expect it would be more effective than the politically flaccid, catch-and-release system we have now.

The article included a comment that gives reason to the site’s name – “Common Sense” – ,

No Teen Needs In-Car Electronics and Mobile Connectivity
In 2007, AAA reported that 21% of fatal car crashes involving teens between the ages of 16 and 19 were the result of cell phone usage. This result was expected to grow as much as 4% every year. With numbers like that, it’s a wonder that one of the biggest innovations showcased in the 2010 Consumer Electronics Show in Las Vegas involves cars equipped with 10-inch high-definition screens that do anything from reading tweets aloud to uploading photos and videos to browsing the Internet. The statistics on cell phone distractions already tell a devastating story, and many states have quickly moved to ban texting while driving. But as any parent — or, for that matter, any auto insurance company — knows, teens aren’t only the most dangerous drivers, but they’re also the most distractable.

A more religious person than I would add “amen” to that.
** “The study, entitled The Impact of Hand-Held and Hands-Free Cell Phone Use on Driving Performance and Safety Critical Event Risk, shows that engaging in visual-manual subtasks (such as reaching for a phone, dialing and texting) associated with the use of hand-held phones and other portable devices increased the risk of getting into a crash by three times”