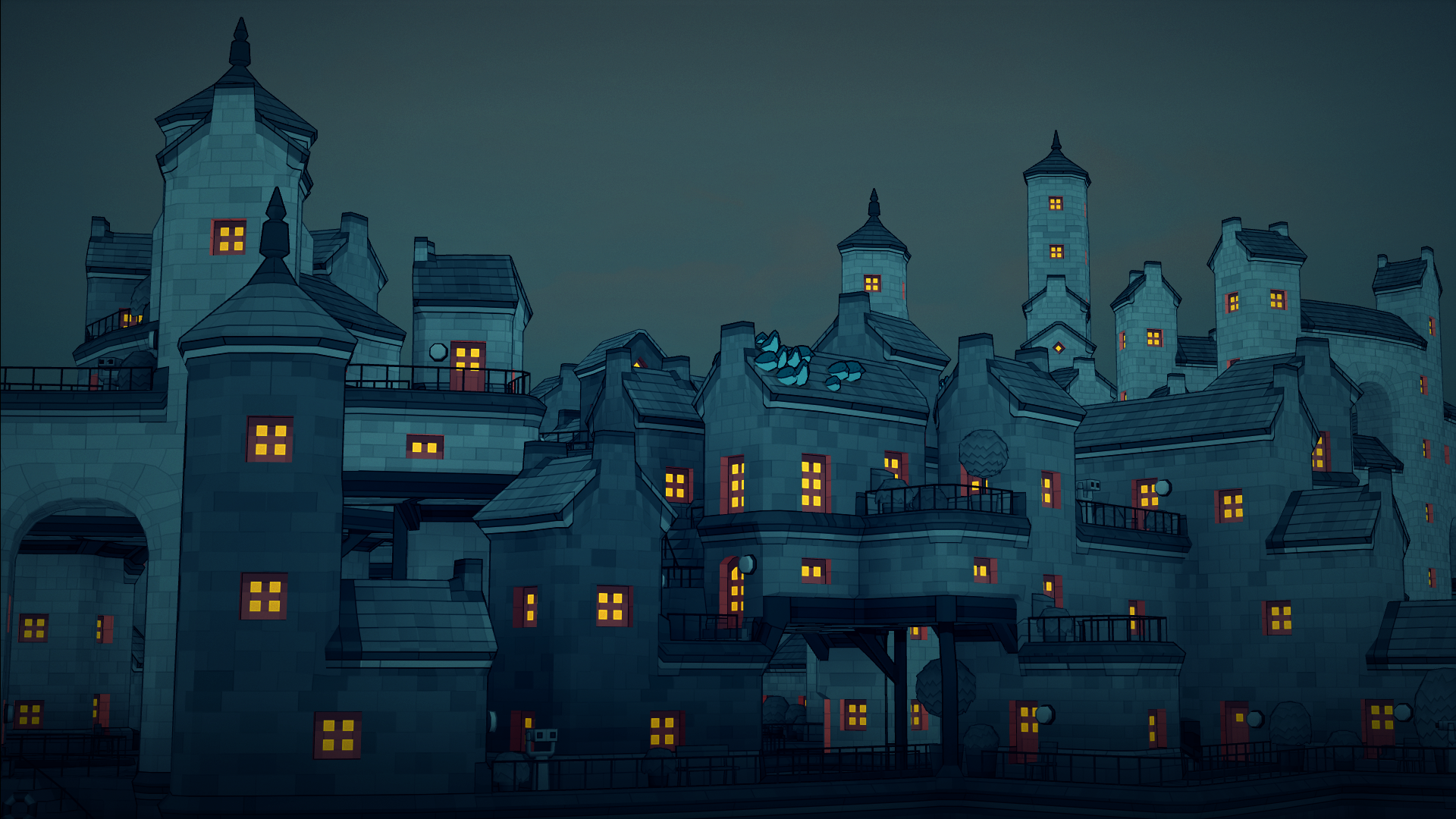 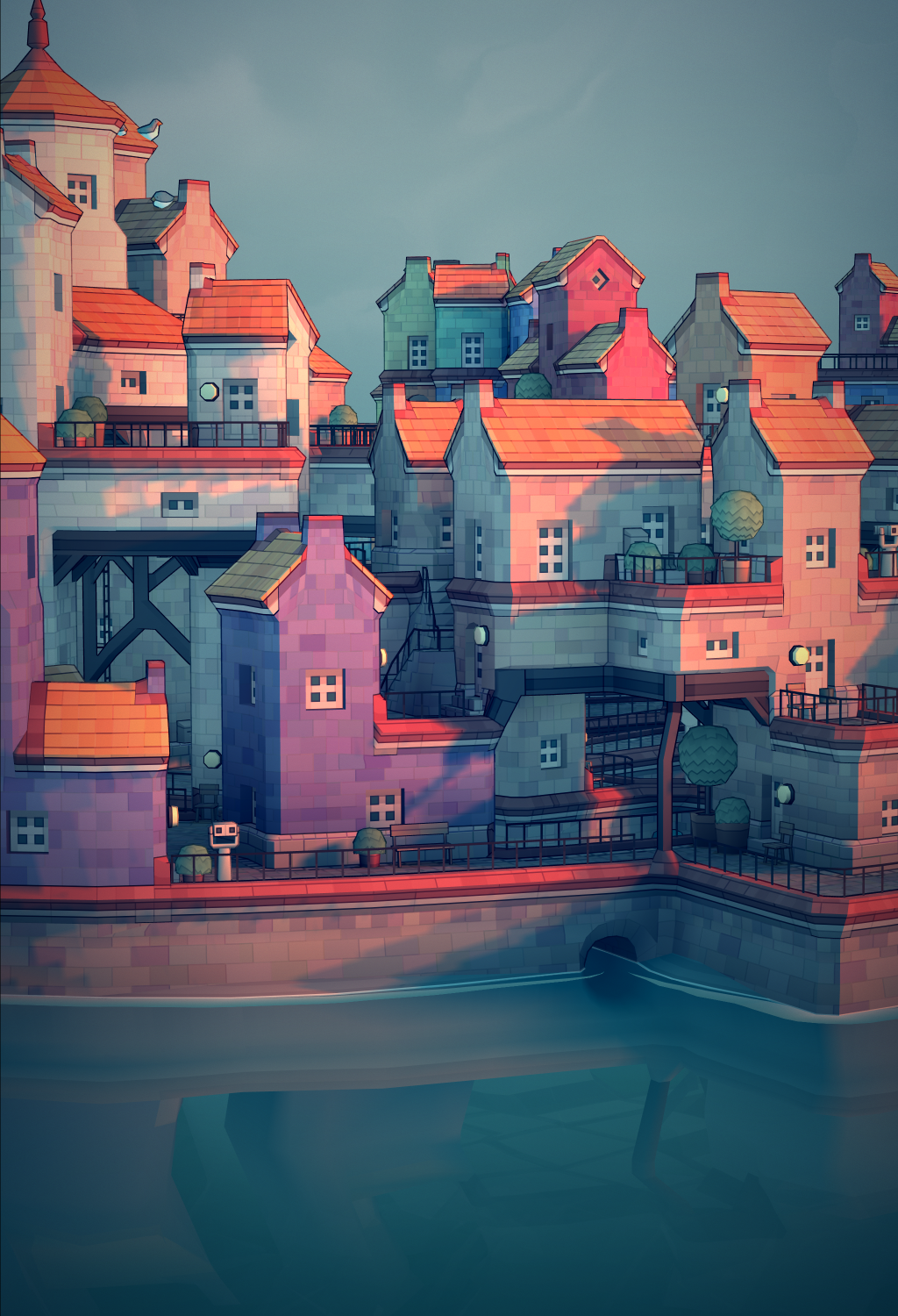 As a longtime gamer, I am always looking for new forms of computer and online entertainment for my PC. This week I discovered Townscaper and picked it up while it was on sale on Steam for about $6 (tax included, albeit a little more post-sale; also available for Android, Xbox, and iOS platforms). It’s money well spent, methinks, as a fan of city-builder and simulation games. You can try a somewhat limited online version of it to see how it works by clicking the link in this paragraph.

Townscaper is not actually a game, but rather a virtual toy or a digital thought experiment; there are no quests, no accomplishments to pursue, no wins or losses, no scores to keep. Instead, you build a “city” on the water using simple mouse clicks (left mouse button to add, right to remove). Your only real options are the choice of colour in the structures, where to place a block, and how tall you want to build. The result is quite cute no matter how big or complex. I’ve used the nighttime screenshot above as my current desktop.

No goal. No real gameplay. Just plenty of building and plenty of beauty. That’s it.

And from a PC Gamer review:

Townscaper isn’t a game so much as it is a virtual toy. A kind of Lego set for building picturesque, cobbled villages as cosy or as sprawling as your imagination desires. No complex traffic, power or infrastructure management here—just left clicking to place a tile (a street at water level, a brightly-coloured house anywhere above that), and right clicking to delete it. Really, that’s all there is to it.

Controls are so simple that no tutorial or manual is required, and you can learn them all by simply clicking away (you have to press ESC to make the settings menu visible, however, and there you can change the lighting, grid display, and screenshot size; this also applies in the online demo). However, users have discovered a few nifty tips and tricks that you should explore in online discussion forums like Steam’s community hub. 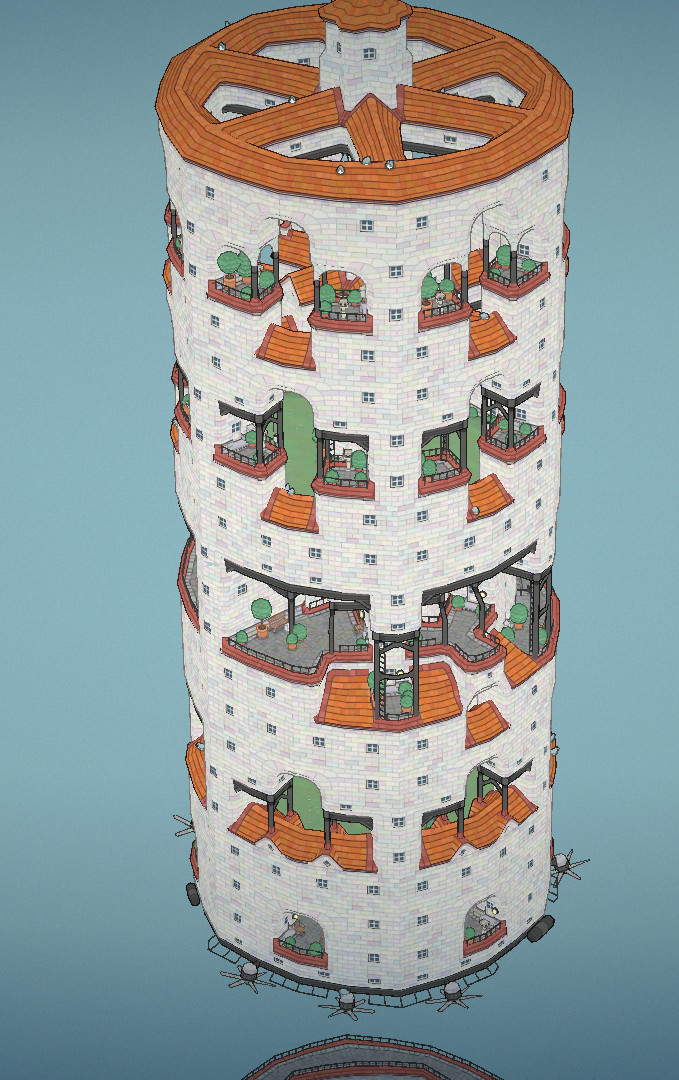 You can move the mouse to change perspective, raise and lower the view, zoom in and out (albeit not as far away as I’d like), change the lighting (including ‘night’ shots, as above), and take a screenshot of your work (remember to set the resolution in the settings panel first!). The “city” develops on a non-linear (“organic”) grid, so it isn’t made entirely of straight lines and boxes. The grid can even be changed before you start building by right-clicking and dragging it around the screen until you see a pattern that you like.

If you zoom in close enough, you even pass through walls and can get an inside view, or a view from a balcony or window.

I find it quite addictive, trying new designs, seeing what the program will do when I add or remove blocks. In the few days I’ve played with Townscaper, I’ve built a dozen or so “cities” as I’ve experimented and learned how it works.

Small items appear automatically: laundry lines leap across spaces with washing on them; small birds settle on rooftops; trees in pots, benches, railings; telescopes, outside lights. They all add to the look and feel to make the city look like a real place.

Well, sort of. You can colour the buildings in shades unlikely to appear in real life, and build arches and shapes that might defy modern engineering, even though they look plausible. If you learn the tricks (from online tutorials; I found one on the Steam community hub), you can even craft flying structures. Not realistic ones; more like something from a fantasy or steampunk novel. or perhaps a graphic novel, but you can see my first effort in the flying tower, above. 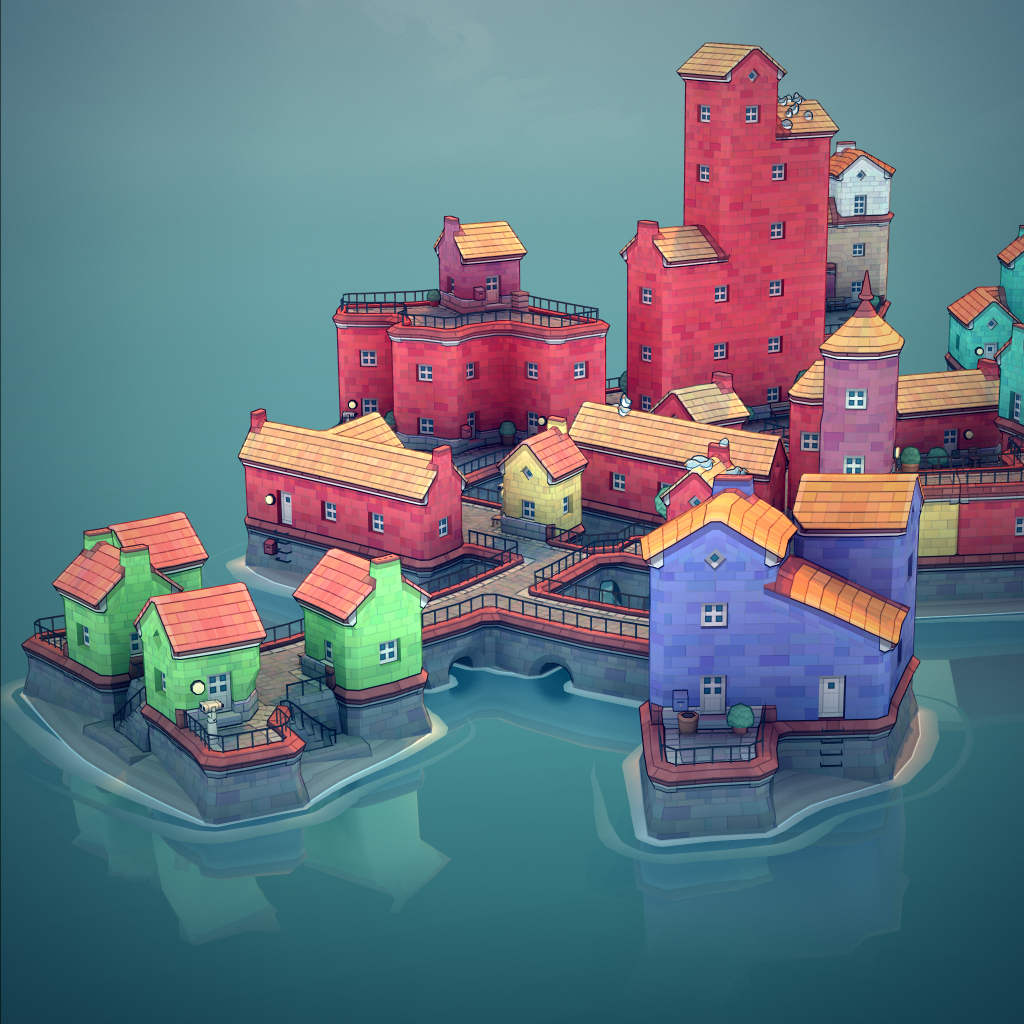 The buildings all have a sort of European town style that I’d really like to be able to change into other styles (like a modern one). I’d like to have different grid forms, too, including one with straight lines to make North-American-style places.

And I’d really like to have an in-game feature to change the palette. There are tutorials on how to do this online, but they require an upscale graphics or paint program like Paintshop Pro or Photoshop (the built-in Windows programs won’t open the tiny palette file, and Paint 3D lacks the proper tools to change the small pixel blocks properly). I’d also like an option to build on land, not just water (maybe a terrain with varying heights).

It’s not likely that these options will be included in any updates, at least according to the discussion forum on Steam. But you can’t ask a lot from a $6 game. Perhaps the developer will release a more richly featured version in future, at a higher price. I’d be happy to buy it, too. 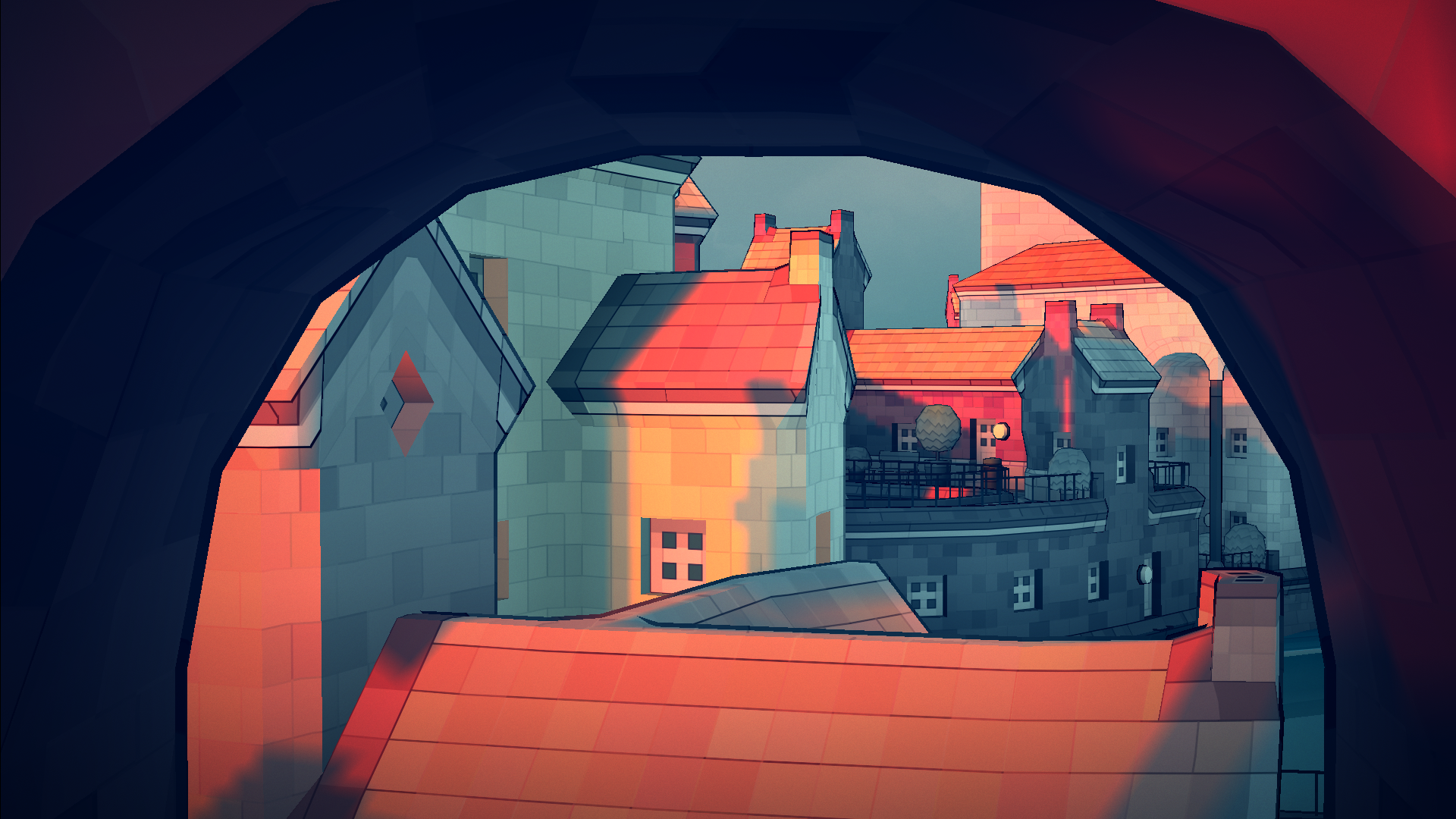