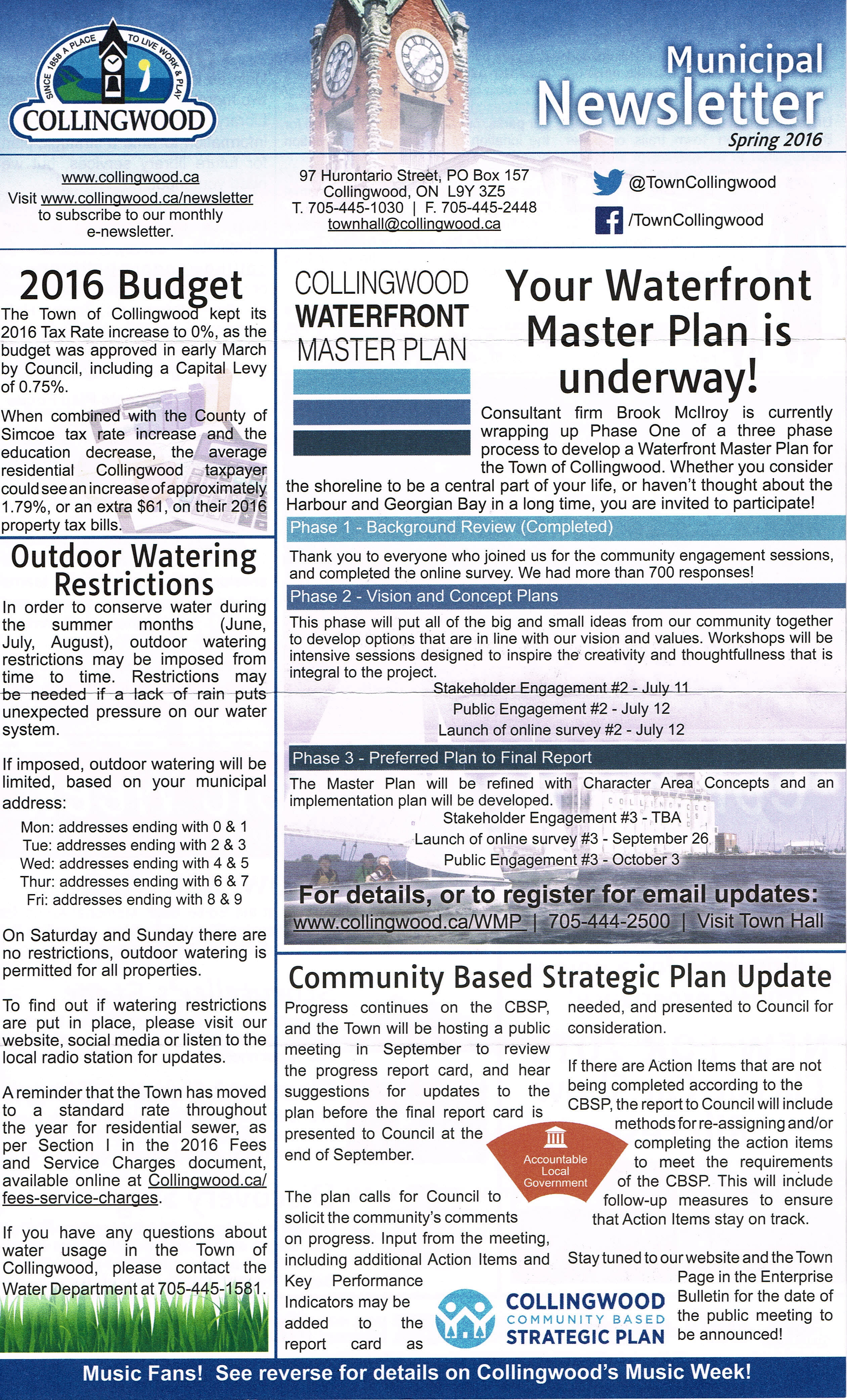 Did you receive your “spring” newsletter from the town? The one delivered on the first day of summer (or later), lacking any actual news… yes, that one. To me it appears as clumsily formatted and poorly written as all the previous issues. Another one that likely wouldn’t even get a passing grade in a high school art class.

Since the town continues its race to the bottom of the design barrel, I won’t reiterate all the problems in detail, since they just repeat those already exposed. I’ll just throw in a few comments (read here and here and here for my previous analyses). Needless to say, nothing has been corrected, nothing improved, at least in content, design, layout or copywriting. 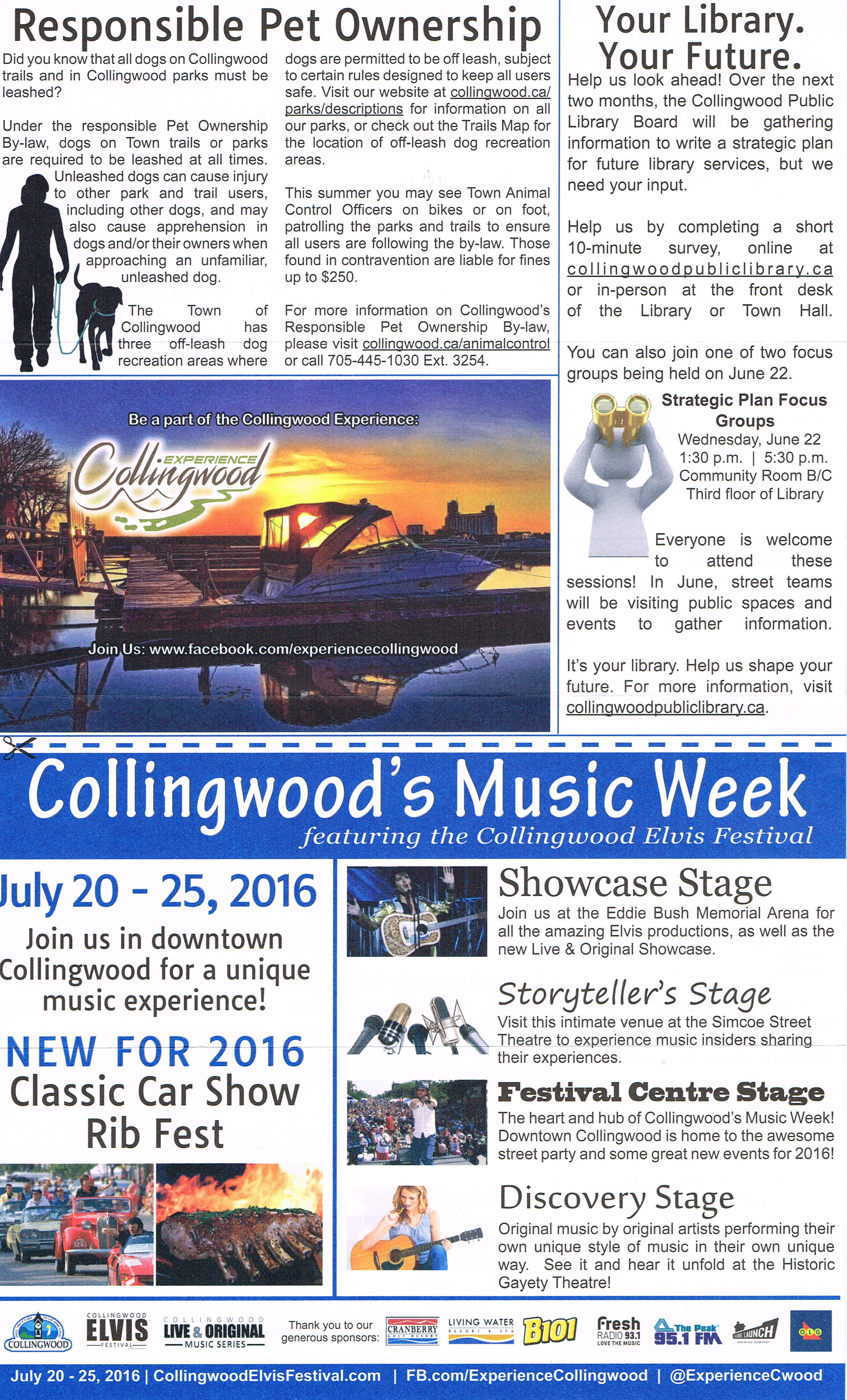 That grinding sound, by the way, is my teeth as I peruse this. Sorry for the noise. Bad design combined with bad typography always sets my teeth on edge.If it does for you, too, you may wonder who is responsible for this?

That’s easy. In any corporate hierarchy, the person at the top is where the buck stops. It’s a matter of corporate honour and ethics for the leader to take responsibility for his or her staff’s actions and output. The captain goes down with the ship. After all, that’s what a real leader does.

So here we expect the interim CAO reads and approves every communication that reflects and represents the town. As the top staff member, paid $225,000 a year, this is his responsibility.

So why does he permit what I perceive as a supremely shoddy effort to be issued again; one that is so easily open to criticism, not to mention snickering and guffawing? It remains a mystery.

A cunning plan must be at work, as Baldrick might say. Let me imagine some scenarios for you…

Perhaps the interim CAO believes this work represents the pinnacle of design and writing. Avant-garde in its cavalier disregard for what rules the so-called design professionals think matter. Our own design Dadaists are at work here, cunningly contravening the rules for the startling effect it has on the audience.

Perhaps he believes a dreariness of type is the optimum delivery vehicle for dreary communication. After all, anything but Arial is surely pretentious; serifs are too elite. That vaunted type contrast is surely overrated (except, of course, in the piece on the music week that uses eight different typefaces in one ad, plus the word ‘unique’ used twice, both inaccurately).

Rag right must be a too radical form of justification, so only full justification will do in every instance. It creates those lovely rivers of white space that, contrary to popular belief, are not ugly or awkward, but are subtle and attractive. Large gaps in text and spaces within words themselves surely help, not hinder, comprehension.

And let us not omit exclamation marks – in fact, let’s throw in several where they are totally unnecessary just because we can! The music week piece has four of them all by itself (and one misplaced apostrophe)! Same with Capital Letters! Let’s Make Everything Seem Important With The Egregious Use of Capitals and Exclamation Marks! Gosh, it’s Just like Being Back in Elementary School!

But if we love to toss in egregious exclamation marks, we must be sure to eschew hyphens at the same time. Forget the style manuals: expel those pesky pieces of punctuation from our compound words! After all, aren’t the basic rules of English just overrated guidelines?

Perhaps, too, he agrees with the saying, ‘no news is good news,’ since nothing in the publication is actually news. Most of it is recycled advertising pablum that refers to issues or events already several months old. Nothing at all in it about The Block’s ongoing witch hunt against our utility services and their staff. Or The Block’s destruction of TWO competent utility boards and their replacement with inexperienced councillors or pet staff. Or the plummeting staff morale. Or The Block’s handing an unlimited expense account to “Senator” Jeffrey to fuel her personal political ambitions. So much news, so little actually reported…

And the writing… You have to love the combination of bureaucratese, run-on sentences and the passive voice. Literally. Because if you don’t love it, you may feel nauseated. It’s like reading a tax form, only not as crisp and clear.

Your head will spin, too, with such disingenuous claims like, “The Town of Collingwood kept its 2016 Tax Rate increase to 0%.” Aside from this “news” being more than three months old, readers of my blog know this claim simply isn’t true. Council tried to con you by slapping on a “levy” on your bill and pretending it wasn’t a tax increase. They were hoping you wouldn’t notice, but you, dear reader, weren’t fooled by this risible effort to look as if they weren’t hiking your taxes. Of course they did!

But take heart in knowing they have given themselves a raise. Twice so far. Wonder why that’s not a “news” item?

But I digress… why is there a generic bit of clipart of what appears a grey alien with binoculars stuck in the piece about the library’s strategic plan? Are we expecting extraterrestrials to attend?

And then there’s that cute little graphic labelled “Accountable Local Government” cunningly stuck in the pablum about the CBSP (the flaccid committee-based wish list that is neither strategic nor a plan…).

Accountable? This council had more secret, closed-door meetings in its first year than most councils have in their entire term. They have decided about selling the airport, our electrical utility, about waterfront properties, about destroying the water and electrical utility boards, about pretty much everything else without even a nod towards public input. This council is the very antonym of accountability. But let’s try to change that perception by inserting a cute little orange clip art into the text. That’ll work…

Perhaps it’s to distract you from the abysmal 43-word run-on sentence that opens this piece. It also contains drearily long sentences at 27, 35 and 23 word lengths, respectively. Comprehensibility is clearly unnecessary. And how does one “stay tuned” to a website? I can’t find the tuning dial on my laptop…

A publication should communicate something more than ineffective communication. Its value in informing the populace is only as good as its content. So what communicates better than a clumsy piece about what might happen if the town ever implements water restrictions in the undefined future for unexplained reasons (we live beside a lake that is higher than it’s been in decades…). The convoluted explanation about which homes can water on which days (about as clear as the space shuttle instruction manual…) doesn’t mention what the penalties are for not doing obeying. If, that is, it ever happens. Now that’s communication!

Perhaps the interim CAO has been too busy hiring those out-of-town lawyers and consultants on whom hundreds of thousands of dollars have already been spent (and the bills haven’t begun to slow down, let alone stop…) to give the ‘newsletter’ his full attention. Or perhaps he considers it of lesser importance than, for example, writing shrill emails to hector staff at Collus. After all, he’s only the interim CAO, and lacks the vested interest in the town a permanent CAO who actually lived here full time would have.

But be careful not to complain about these publications. I have seen the emails to – and about – one resident who dared criticize an earlier “newsletter.” They have been described to me as condescending, insulting, and even threatening – not just from staff, but from some members of The Block, too (these will be revealed here, pending the results of the police, Privacy Commissioner’s, and Ombudsman’s investigations…).

When that resident mildly suggests that one person on council with more than 40 years or marketing and advertising experience could help design something better, the interim CAO and deputy mayor respond to one another with the word “tentacles.” Whatever that remark means…  It sure sounds disrespectful to me, but wotthehell, no one in The Block obeys the Code of Conduct, anyway. It’s for others, not them.