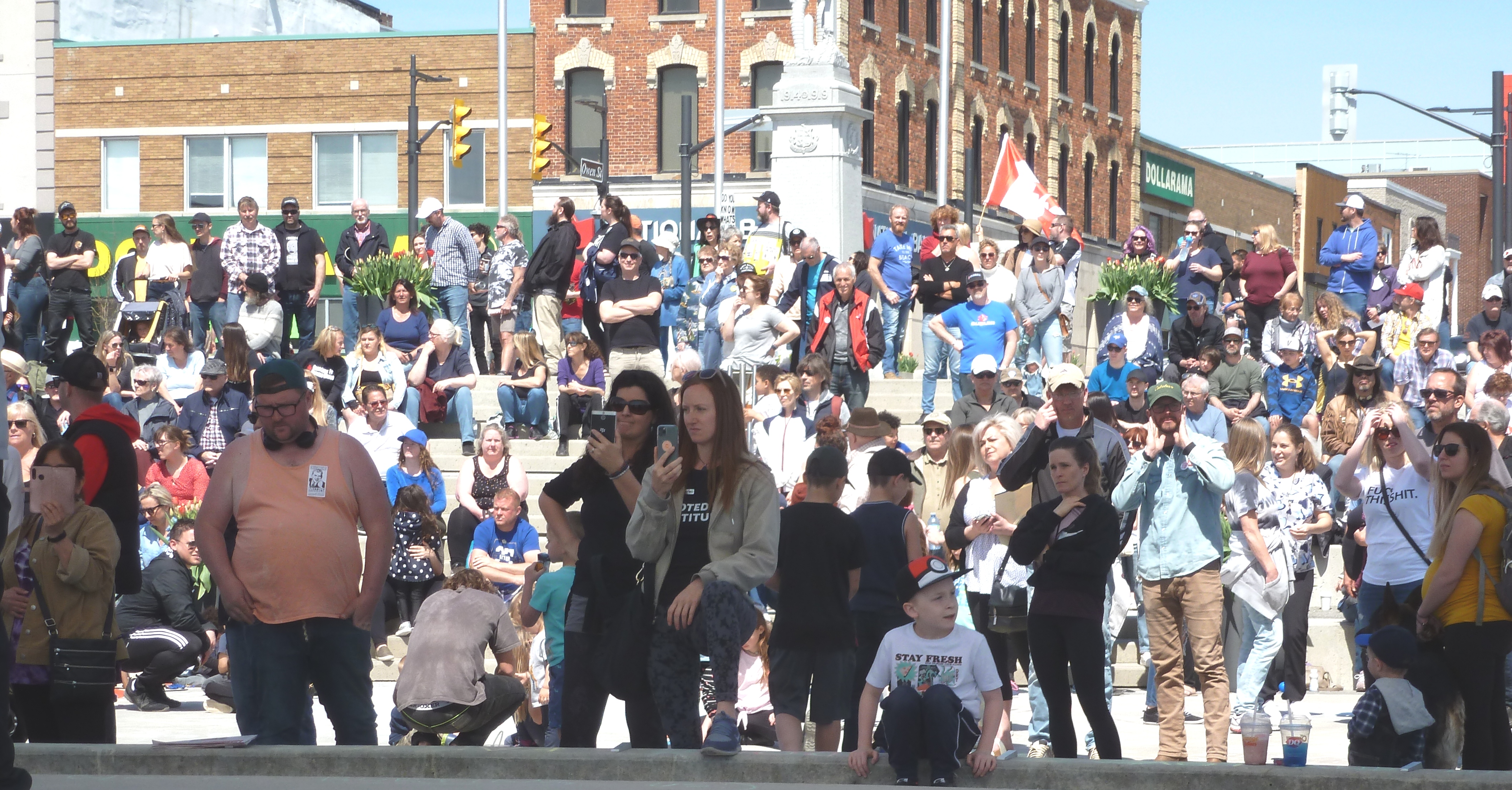 I was reading a story in CollingwoodToday about another anti-mask/anti-lockdown protest recently — this one in Barrie, Sat. April 24 — and thought to myself that our language does not have the appropriate words to describe the combination of selfishness, stupidity, and ignorance that fuels this sort of event. Sure, we have lots of individual words to describe these people, but it seems the pandemic has brought out a unique combination of attributes that deserve their own vocabulary.

This was the seventh such rally in Barrie alone. Who knew there were so many covidiots* there? The article says they were all held “to protest the lockdown measures by all levels of government to fight the pandemic.” What it really should have said is that they were people protesting being inconvenienced by being required to protect others.  None of that namby-pamby “we’re all in this together” sentiment for this lot! They’re in it for themselves. And their shopping, of course.

These aren’t like the pro-democracy rallies in Middle Eastern or Asian countries where people put their lives on the front line to bring about a fundamental change in government for the greater good. These are people who are annoyed they can’t get their hair or nails done or shop for new sneakers. These people are totally unconcerned that their actions might put someone else at risk of serious illness or death because they believe their privileges come first and screw the rest.

If this is a “freedom rally,” then the lineup at a box store waiting to buy a new TV on Black Friday is a protest against unfair store hours. It’s all about me, me, me, with no regard for the rest of the community. These people are — quite literally — willing to have others die so the protesters can get back to shopping.

We need new words for that level of selfishness and arrogance. The old words seem too weak and over-used when describing these people.

And what about the anti-mask aspect? It takes a remarkable amount of deliberate, even arrogant stupidity to ignore the simple, basic medical truth that masks help reduce the spread of a very contagious disease. But the pictures show hundreds not wearing any. That’s a Jim-Jones-cult level of stupidity. This is the reason the virus isn’t going away.

Or maybe not. Maybe they’re deliberately trying to spread the disease. After all, none of them can claim not to know about it, not to know about the protocols and restrictions. They’re exhibiting pro-pandemic, pro-disease sentiments, just like their cohorts in the anti-vaxxer movement. They must WANT this thing to spread.

Why? That’s a tough question to answer without descending into name-calling about mass stupidity, anti-science and anti-medicine beliefs, and willful ignorance, This is a conspiracy cult from the bowels of the QAnon madness. We need new words specifically for these people.

Earlier that day, some more thoughtful folks had gone to where the “protest” was to take place and “chalked the names and ages of 100 people who have died from the virus on all levels of cement… Other messages said there were 23,756 deaths in Canada from COVID, including 7,789 in Ontario alone.”  Instead of taking time to look down and consider the names and what those deaths mean, the “protesters” simply ignored them and walked over the names. So much for that “all lives matter” trope. Deaths from the coronavirus mean nothing to people who will rally, maskless and close together, for their “right” to get a haircut or a pedicure. 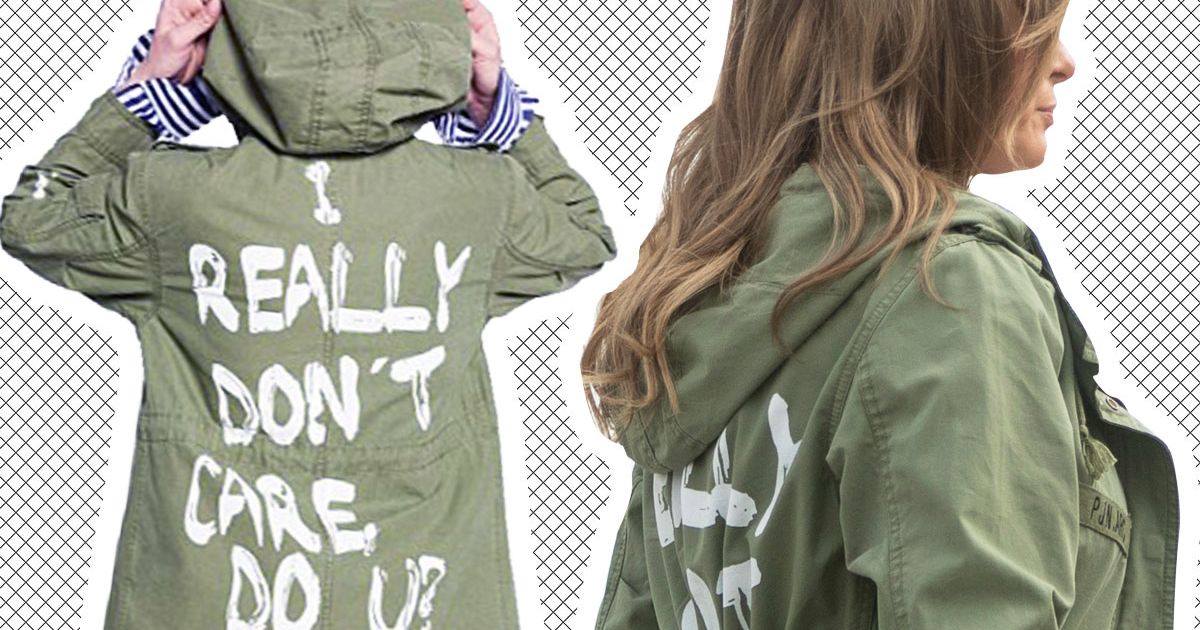 When Melania Trump visited immigrant children locked in cages, instead of compassion, she showed her utter contempt for their plight by wearing a jacket with the writing “I REALLY DON’T CARE. DO U?” on the back. That must be the motto of everyone at this rally.

These people know what they are doing: they know the ramifications and the consequences of gathering en masse, too close and without masks. They KNOW it will spread the virus. They just don’t care. Caring for others is so 1990. It’s something your grandparents did, and what kind of lesson in morality can you get from someone who isn’t posting videos on TikTok? Twenty-twenty-one is all about me, me, me! You can’t shame people who don’t give a damn about others or what others think.

Chris Hedges, in his book, Empire of Illusion, called modern culture “the end of literacy and the triumph of spectacle.” That’s really what this event was: spectacle. It was not even close to legitimate political dissent: merely the ignorati showing off their collective disdain for reason, common sense, and consideration for others. They walked over the names of the dead, uncaring.

Hedges wrote (p.51), “A public that can no longer distinguish between truth and fiction is left to interpret reality through illusion… The worse reality becomes… the more people seek refuge and comfort in illusion.” This rally was full of people blinded by such an illusion. Perhaps delusion is a better word. Hedges also wrote (emphasis added):

A culture that does not grasp the vital interplay between morality and power, which mistakes management techniques for wisdom, and fails to understand that the measure of a civilization is its compassion, not its speed or ability to consume, condemns itself to death.

So what new words, what catchy, pointed neologisms can we conjure up the description of an uncaring, inconsiderate, selfish group dedicated to harming others so they don’t have to be inconvenienced by rules? What brave new words can capture their conscious acts of ignorance and stupidity? Covidiots has a nice ring, but it’s been overused and just captures their stupidity, not the arrogant selfishness we see.* We need someone to craft a new vocabulary.

The CwoodToday story says that out of all those hundreds of people openly breaking the law, only “between 10 and 15 people” were ticketed “for breaching stay-at-home order; One woman arrested for obstructing police.” Yet as of Saturday, April 3, 2021, the province has limited outside gatherings to five people, who much also “comply with physical-distancing requirements.” The photographs show that wasn’t the case in Barrie this weekend.

Ten to fifteen tickets for a crowd of about 300? That’s not even a mediocre police response to a serious threat to public health. Why weren’t all of them ticketed? And the ringleaders arrested? The organizer, Tyler Nicholson, openly boasted “there would be another rally next Saturday.” To me that’s not civil disobedience: it’s domestic terrorism. Why aren’t the police taking this seriously?

Super-spreader events like this are known to cause infections that lead to deaths. Many of our hospitals are already overwhelmed, and the new variants emerging (already here in the province and spreading) are far more infectious than the original strain. These organizers should be treated as serious and deliberate threats to our public health system, not as the political dissidents they imagine themselves to be.

So maybe we need new words for police inaction, too. Words like ineffective, inadequate, lukewarm, lacklustre, and spineless seem inadequate to reflect the failures of the police to do their job and protect the community from the fools who are determined to keep the pandemic going and infect as many people as possible.

* From the Cambridge Dictionary, a covidiot is “someone who behaves in a stupid way that risks spreading the infectious disease Covid-19.” As the LA Progressive described it,

Covidiots are people who refuse — often angrily — to take common sense precautions against the deadliest disease pandemic in a century, thus risking their lives and the lives of others.Simultaneously, covidiots “may also engage in selfish behavior that doesn’t look out for the greater good when it comes to slowing down and stopping the spread of the coronavirus…”

Apparently, moronavirus is a synonym, although it doesn’t work for me. There’s also maskhole, morona, and coronalusional, but none of them strike me as particularly catchy. Plus they don’t capture the selfishness aspect of covidiocy.