Take a look at the back of any of today’s pickup trucks. Notice the exhaust pipe, under the vehicle? It points to the right. The same side of the road that pedestrians and cyclists use.*

Notice the bike lane in the photo – that’s where cyclists will be when this truck passes by them. No place to move to avoid the fumes.

Yet I have seen vintage trucks with that design, as in the photo to the right (even here in town). Several, in fact in just the past week. I don’t know the date of the change from rear to side exhaust, but it seems to be at least two decades old. I also know there are aftermarket kits that will return your exhaust to the rear on pickup trucks.

By design, modern pickup trucks are meant to spew their exhaust directly at pedestrians and cyclists they pass, unlike most cars, vans and even SUVs which exhaust to the rear. And a very few that exhaust to the left. It’s got to be a deliberate, anti-social design by manufacturers. Designers surely think of these things. They’re not stupid, even if they are misanthropic towards pedestrians and anyone on a bicycle. They planned it. They know where people walk or cycle.

Why, one has to ask, are governments permitting what is clearly a hazard – even a threat – to pedestrians in truck design to continue?

If you live in any town or city where there are no sidewalks and pedestrians walk on the street – like many streets in my small town – this is both harmful and insulting. Even if you walk on a sidewalk beside the road, you’re getting the blast aimed at you. It’s particularly bad for dog walkers because their dogs are at the height to get the exhaust right in their faces. Kids, too. But we’re all targeted – seniors, parents pushing strollers, joggers, skateboarder…

You will notice it most when you walk or cycle past a truck idling on the side of a road, or stopped at a corner. Or trucks idling near shopping centre entrances – the exhaust blasts at everyone passing by. Sometimes it’s close enough to feel,as the little water droplets hit your skin and clothing. That warm air you feel on your leg below your cycle shorts coming from the exhaust? Even if you can’t see it, it’s poisonous. Very poisonous. 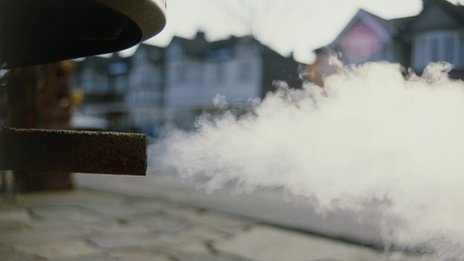 And I’m sure you’ve seen the trucks spewing oily clouds of black smoke like in some of these photos. If that isn’t anti-social, what is?

Want your children to breathe that? Your pets? Yourself?**

We all know car exhaust is toxic too. There is no “good” vehicle exhaust. All of it, from every gas-powered vehicle is bad. Our vehicles produce the greatest percentage of greenhouse gases in the urban environment: carbon dioxide, carbon monoxide hydrocarbons, and nitrogen oxides. Oh yes, and and water. Poisonous water that jets out of the exhaust to reach nearby people, pets, wildlife and lawns.

Now and then, you’ll see a truck with exhaust “stacks” that direct the spume up. But some owners aim it to the side, not the rear, which often means the fumes fire right at the heads and faces of nearby pedestrians. Even if the vents are a little higher, the exhaust falls down to face height rapidly.

And some drivers not only know this, but use these stacks to deliberately “smoke” pedestrians and cyclists (and capture their acts on Youtube like it’s a big lark to poison another human).***

Others, clearly not very mature or intelligent, think that toxic black smoke is “cool”…***

And this is simply stupid. Remarkably stupid:***
[youtube=www.youtube.com/watch?v=aOEzo7f2o84]

There are better, safer, more pedestrian-friendly designs for truck exhaust. Out the back or, better yet, on the left side towards other vehicles. The latter, of course, is again problematic on one-way streets, but at least that’s the minority of traffic.

A company selling the “stacks” boasts on their website that they “Increase Performance, Power, Mileage! Lower Your EGTs! With these Big Rig Triple-Plated Chrome Stacks!” Not a word on what others will think about your environmentally-unhealthy black smoke blowing at their faces.

How would you like to be the pedestrian this truck passes while you walk along a street without sidewalks? Deliberately “smoking” pedestrians with cancer-causing exhaust as a “joke.”

Well, you probably have been in a similar situation, and frequently if you live in a smaller community. It may not have been deliberate, as in the linked news story, or as obvious, but you were still subjected to vehicle exhaust at close range all the same. If you’re like me, you just put up with it  – what can you do? – we shrug it of as an inconvenience. But it’s more than that: it’s dangerous. Even life-threatening if you have any lung or breathing impairment.

The WHO recently warned after several studies that diesel fumes cause cancer, and advised people to  avoid them:

Exhaust fumes from diesel engines do cause cancer, a panel of experts working for the World Health Organization says. It concluded that the exhausts were definitely a cause of lung cancer and may also cause tumours in the bladder. It based the findings on research in high-risk workers such as miners, railway workers and truck drivers. However, the panel said everyone should try to reduce their exposure to diesel exhaust fumes…

Easier said than done when the exhaust is aimed directly at you from a vehicle a meter or so away. Great: one more thing in our world that causes cancer. Think vehicle manufacturers care? Right. As much as our federal and provincial governments care.

It would help in some small way if truck manufacturers designed their vehicles to exhaust on the side normally opposite that of pedestrians. At the very least it would show some courtesy for pedestrians and others who share the road with these trucks. Enforcing laws to prevent “smoking” vehicles would be better.

But I don’t think it will happen soon. Not while idiots like this think spewing exhaust fumes on other people is funny…***

* I haven’t done a scientific study, but I’ve been looking around town for weeks and have yet to see a recent truck with an exhaust that vents to the rear. Or to the left. If anyone knows a current manufacturer who builds a stock truck with exhausts to the left or the rear, please let me know.

** To be fair, the photos of black, greasy exhaust here mostly show diesel fumes, rather than gasoline exhaust. Most gasoline exhaust is grey to white from the water vapour, but it still contains a toxic mix of chemicals – all invisible to the eye, and odourless. Why governments allow diesel vehicles to poison us like that is beyond my ken. But stand on the shoulder of any highway and watch truck after truck drive by spewing it.

***  I know, I know, you can’t  legislate people to be smart, mature, considerate, alert, conscientious or responsible… you can’t force people to think, to care, to reason, to weigh decisions or to consider consequences. You can’t educate the willfully stupid, nasty, belligerent, antisocial or sociopath and expect them to come out on the other end as little mini-Greenpeace Buddhas driving Smart Cars. Some folks are born, and will die, stupid. But come on. These aren’t harmless “pranks” – they’re attacks. Assaults with intent to do harm.