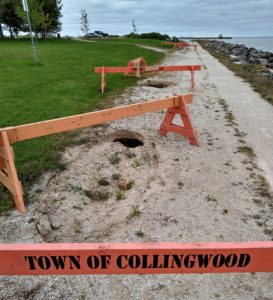 We took a walk along the sidewalk and trail into the inappropriately-named “Millennium” Park* this week and were deeply disappointed by the lack of maintenance there.

Aside from seeing a private pickup truck driving on the sidewalk for 100 or more metres before turning onto Waterside Lane (where were the police when you need them?) and the trees along the eastern side of the road that were abandoned to die, it was the poor condition of the trail at the north end, the sinkholes, and the lack of maintenance for the commemorative bricks and benches that we noticed most.

I’ve previously written about the poor maintenance of Collingwood’s “Walk of History” which has become the “Walk of Shame” as an example of how the town disrespects our local history, its residents, and our assets. And I’ve also written about the sad neglect of the Terminals by this council. And about the corroding lampposts along First Street. And about the run-down state of Friendship Park. This town looks increasingly scruffy and untended because this council has no pride in our community and that attitude rubs off on staff. 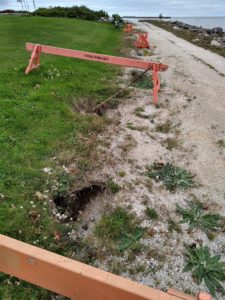 In this post I want to highlight the crumbling, weedy trail along the east side of the spit, with its numerous and unrepaired sinkholes and dead trees, at the northern end where it borders “Millennium” Park. A lot of visitors come here and we should be deeply embarrassed by what they see here. What does this neglect say about Collingwood?

Some — but not all  —of those sinkholes have been marked by barricades; some by just one, others none at all. Yet since at least spring 2020 when I first saw them, nothing seems to have been done to repair them. And more have opened up since then. One is now a home to a groundhog burrow (we saw the occupant enter it).

Several of the barricades and warning cones have fallen down, some into the sinkholes. Others are placed so poorly they don’t properly identify the holes or depressions. No one seems to bother to pick them up or move them. That speaks volumes in itself about the state of maintenance and upkeep. 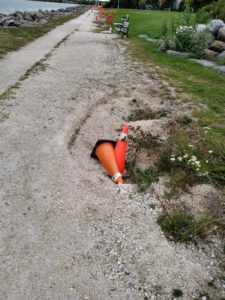 And then there are the decaying benches (see photo, above). The tourist/historical map on its stone base at the northern tip of the park is falling down the eroded slope into the bay. More barricades.

The commemorative bricks that residents and companies paid to have installed (see photos, below) have been let decay and erode by the town. Some have been removed, some of the sections are weed-infested. It’s a show of disrespect to all the people who bought a brick or who paid for a commemorative plaque on a bench in a park that’s going to seed.

And, in fact, the overall poor level of maintenance and repair is a show of disrespect to everyone who lives or visits here. But it’s not surprising. Respect for others is clearly not in this council’s vocabulary.

So why hasn’t the town fixed the mess? Repaired the sinkholes after so many months? Cleaned up the benches? Tidied up and restored the commemorative bricks? Done anything to improve this popular park?

Well, for one, council has been obsessed with throwing our tax dollars at the Saunderson Vindictive Judicial Inquiry (the SVJI), wasting more than $10 million since 2015 on this personal vendetta, so there’s less money to spend on fixing roads, streets, parks, and infrastructure.

Because no one on council seems to care how the town looks, their lack of interest in the community has become the standard. And it shows. Our sidewalks are crumbling, streets decaying and potholed, First Street lampposts are corroding, our parks are scruffy, our public gardens and flower plantings are untended and full of weeds, and any trees the town plants get abandoned to die without even watering. The town looks and feels run down.

I blame council for the lack of interest, lack of leadership, lack of concern, and lack of community spirit. The scruffiness of our town is a reflection of their attitude. The buck stops at the mayor’s desk and he’s focused on getting a better paying job as MPP in Queen’s Park next year and scurrying out of town, so it’s not like he gives a damn about Collingwood (as if he ever did).

Right now, instead of using your tax dollars to fix these problems, council is throwing our money at the sole-sourced legal firm that was Mayor Saunderson’s and Councillor Hamlin’s former employer. Yet neither of them declared this fact or made a conflict of interest statement when they voted to pay their former employer, nor when they voted to hire the firm without the proper tendering process required by our procurement bylaw.

And why hasn’t our local media reported on this apparent corruption? Oh, right: too many close, personal friends on council they might offend, so instead they won’t investigate anything embarrassing or revealing. Perhaps one of them expects to get a job as an MPP’s press secretary. But I digress.

I am increasingly saddened and embarrassed by the neglect so visible in town. From the dead trees along Third Street and in the dog park; to the weed-infested gardens around the pool, trail entrances, and the Pretty River Parkway; from the graffiti and the uncleaned windows on town property; from the decaying park benches and rotting boxcars behind the museum, it feels like we’re falling apart, and no one in council gives a damn.

* The park was created at the urging of local citizens who wanted to celebrate the arrival of the new millennium in 2000. However, since the millennium actually arrived in 2001, and 2000 was really the last year in the previous millennium, it became a local joke about the poor counting skills of both those residents and the councillors who approved it. But even so, to let this park fall into such a state of neglect is an insult to everyone who worked hard to establish it.
I have previously written about counting years in this blog and earlier on my main site if you’d care to read more about how decades, centuries, and millennia are properly counted. Spoiler alert: they start with the number one and end with a zero.