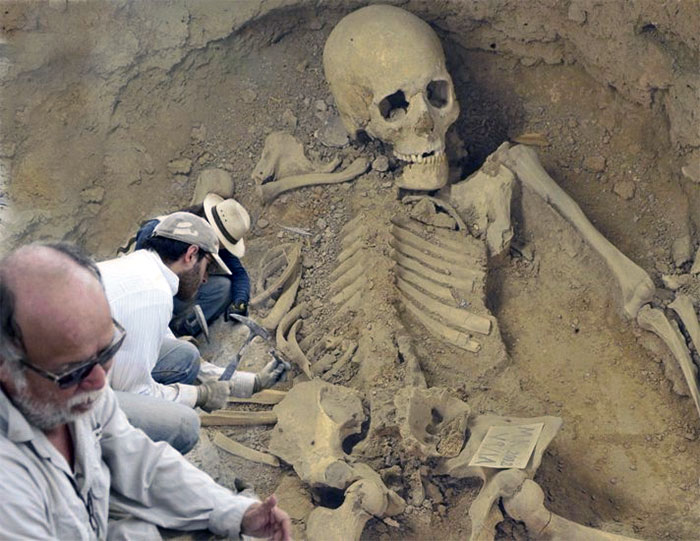 Once again, the internet is being circulated with fake news that grabs the gullible by their grey matter. This time’s it’s a regurgitation of a 2014 hoax – then recycled in 2015- claiming the skeleton of a five-meter tall giant was unearthed in Australia. Accompanying the reports are risibly Photoshopped images that even a child could see are fakes.

As a report on Hoax-Slayer noted:

Supposedly, the skeleton was found near Uluru in central Australia and was 5.3 meters long. The report also claims that an ancient ‘megalithic civilisation’ has been discovered at the site.

You have to shake your head. The source of the bogus story this month (it’s spew, not “news”) is a site renowned for publishing egregious bullshit: World “News” Daily Report. The first photo shows not human remains, but those of a mammoth.

And the so-called, quoted Professor Reese? Or the quoted Professor Adam Goldstein? Or the alleged discoverer Hans Zimmer? More fiction. No such persons work or teach at the University of Adelaide, nor ever have. (Another Hans Zimmer is a composer, author of popular film music for Pirates of the Caribbean and Gladiator)

The WNDR has been publishing crap related to this stuff long before this. In 2013, it published a hoax piece about the “lost” Uluru civilization (Uluru is the native name for Ayer’s Rock) that was so outrageously phony that even the UK’s Daily Mail didn’t buy it. But that didn’t stop WNDR from regurgitating their codswallop – almost verbatim – again this month. In their recent story, the WNDR writers claim:

A team of archaeologists working for the Australian National University, who were proceeding to an excavation near the sandstone rock formation of Uluru, has unearthed the ruins of a large precolonial city dating back to more than 1500 years ago.

Claptrap. All of it fake. Not to be outdone, another of these fake story sites took the tale, even using the same photographs, and spun it all into a tale about a “lost” civilization found at El-Kurru in Sudan. hoping, I suppose, that the conspiracy theorists and New Age dimplebrains who feed off this crap wouldn’t look too closely.

But a lot of people do take it seriously; they share this stuff on social media without taking the time to check out the facts. They swallow the hoaxes whole. Just like our local council has done with the reports on Collus-PowerStream, but I won’t digress into that right now.

All just bullshit. So fake you’d think Breitbart was behind it.

No: there is no “lost” civilization at Ayer’s Rock. No, there were no 17-foot giants roaming the Earth (as impractical and as wacky a notion as wingnut Ken Ham’s prehistoric gladiators fighting dinosaurs – yes, he really is that loony!).

Nor is it the first fake story about giants being uncovered. One was “reported” to have been found during an oil exploration in Saudi Arabia, then rewritten and located in Greece. And regurgitated again in 2010 with the headline “Nephilim Found?” One can only groan.

Nephilim are fictitious giants, based on a 1906 mis-translation of the Hebrew word found in Genesis 6:4. But giants sounds so much sexier than “the fallen ones” so the myth of giants was born and has been repeated from then until today’s New Age wingnuts. If you believe in magic crystals or homeopathy, you are likely to believe in antediluvian giants and their 5-metre-tall skeletons. One wingnutty idea begets another and another.

All of it has been debunked by Snopes and similar anti-hoax sites many times over. If only people would take the time to look at them BEFORE they share this stuff. Sure, thinking is hard, but not that hard you can’t use a search engine first. (Okay, I’ve been guilty of it once or twice, too, but I’m trying to reform my ways, honest…)

One of the reasons you won’t find giants is the “square-cube law” which points out that, “..if we double the size of the animal, the mass of the animal is going to be eight times greater, it will weigh more in other words, and the surface area is relatively smaller leaving less space for transport.” The article continues:

So human-like giants of the Jack-and-the-beanstalk type are physiologically impossible. Even the biblical Goliath, if he really existed, wasn’t that tall (the generally accepted classical height of 4 cubits is about 6’9″).

Remains of big humans have been found – but only giant in comparison to the average contemporary height. In 1991, a Roman soldier who stood 6’8″ (202cm) tall in the 3rd century CE was discovered. Big for his age, but short compared to the tallest man today (8′ 3″ – 251cm). And barely a third the height of the alleged giant from Australia.

No 5m-tall giants have been uncovered, though, and never will be. It’s just another hoax.