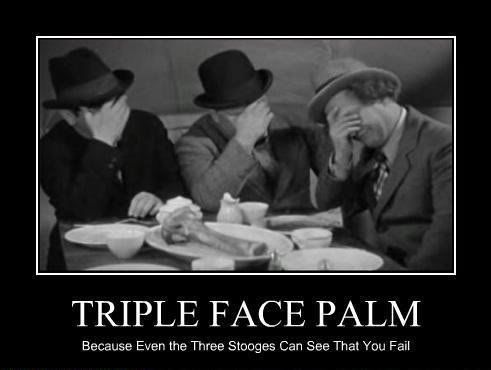 Some readers may be tired of me pointing out how dim-witted The Block on our council are, how little they understand, how little they know, how they dislike reading and learning, how they don’t understand even simple consequences of their actions and how they always blame others for their mistakes and their destructive acts. So this post, let’s let a couple of them do it themselves. In this piece it will be Deputy Mayor Brian Saunderson and his lickspittle Councillor Bob Madigan.

The headline on the Collingwood Connection piece reads, “Collingwood council wants reason for Clearview’s exit from airport board.” Well  like many other newspaper headlines, that’s not correct: the mayor and Councillor Lloyd know the reason: it’s the other seven – The Block – who are apparently so gormless they don’t understand that what they did to our neighbouring municipalities and to the airport development has serious consequences.

I realize that none of the Blockheads campaigned on regional cooperation, even though getting along with our neighbours and working towards mutually beneficial goals has been a successful and effective core principle in Collingwood prior to this term. This group wants none of that. Playing well with others isn’t in their game plan. Or vocabulary. The Connection article notes:

At the Dec. 11 Collingwood council meeting, Coun. Bob Madigan wanted to know if their neighbours had given any official reason.
“I knew the money was taken out and I know why they did it, I was just wondering if they gave us reasons why so we can continue to better ourselves and partnership with other community rather than just saying no, we’re done, thank you, bye,” he said.
Madigan said with the airport being located in Clearview, they benefit the most from a regional airport.

I know, I know: it’s a facepalm moment. They don’t get it. They just don’t get it. The Block expressed similarly fatuous comments about our regional hospital while they did everything they could to kill its redevelopment plans. The Blockheads couldn’t understand why people were upset about that, either.

They are a direct recipient of development charges out there. Moving forward, I would like to know, if at any point if we had dropped the ball.

Okay, stop laughing. I know, I also fell off my chair in hysterics when I read he asked if The Block had “dropped the ball.” Bobby, you never HAD the ball. You and your fellow Blockheads have been playing tiddlywinks this term while everyone else was doing politics. And none of you have even hit the cup.

But wait, he’s whining that Clearview is receiving development charges. Well, Brainiac: the development is on Clearview land, not on airport property. Who else do you think was going to receive it?

And he thinks the airport benefits Clearview most because it is located there? How? It doesn’t pay Clearview taxes. Clearview has few (if any) industries which would make use of it. Military training flights don’t help them. Rich visitors heading to Blue for a weekend don’t help them. Fuel sales don’t help them. Clearview residents who own a hangar there pay airport levies, not Clearview fees. The airport is predominantly used by Collingwood residents and businesses, a simple truth based based on years of data and inbound flight surveys. But that’s a fact, and The Block dislike facts because they interfere with their ideologies.

I know, I know: no one ever claimed we elected the best and brightest. Or the most ethical, or the most honest.

Bobby, the refusal of your clique and the former interim CAO to grant a non-binding letter of intent about future access discussions for that development is why this has all fallen apart. Three years later and you still refuse not only to grant it but to explain publicly why not.

YOU and your fellow Blockheads didn’t engage or inform them and now you’re pissed off they reacted appropriately to you? Put on your big boy pants, Bobby, and take some responsibility for your own actions. That’s what adults do.

This council has held AT LEAST 14 in-camera meetings about the airport this term. Did you ever ask anyone from our partner municipalities to attend? You and the administration never once explained to the public or to our airport partners WHY you wanted to kill the biggest rural development this province has seen in the pasty fifty years and with it 400 full time and >1,000 part time jobs. You’ve never explained WHY for anything you’ve done.

And now you’re whining after the other guys did everything in an open meeting, and an open discussion. Clearview’s Deputy Mayor, Barry Burton, said in a witty understatement worthy of Rodney Dangerfield, “…Collingwood’s council didn’t show a lot of respect to the board.” What he really meant was that this council didn’t show ANY respect to anyone involved. And, as the Connection article continues:

“There are many occurrences where the board has put forward (proposals) that Collingwood council has totally ignored,” said Burton, the township’s current board representative. Burton said Collingwood council didn’t bother giving the board a heads-up when the decision was made in September to declare the airport property surplus.

Why doesn’t Bobby understand that? Why doesn’t he understand that this council’s actions and policies are the direct and inescapable result of this? That this council’s obsession with secrecy and its petty vendettas have consequences? The Block and the town’s administration over the past three years have shown utter disdain and disrespect to our municipal partners, neighbours, our airport board, our hospital and its board. And you don’t get why that might piss off a few thousand people? Take some responsibility, all of you.

In another Connection story, the Wasaga Beach representative on the airport board made similar comments:

Wasaga Beach’s representative on the board, Coun. Bill Stockwell, said his municipality may not be far behind Clearview in pulling its support for the airport. Stockwell said he is waiting for Mayor Brian Smith to return from vacation to discuss it with him, and then plans to bring forward a recommendation for councillors to consider withdrawing both its financial commitment and the town’s representation on the board. “(Collingwood) council has not leaned on the board as much as I think they should,” Stockwell said.

I have no doubt that when Wasaga Beach also withdraws from the board and stops funding our airport, Madigan and Saunderson will issue similarly perplexed statements about how they didn’t understand why everyone has left the schoolyard simply because Collingwood acted the bully and tried to push our neighbours around instead of working with them as partners.

This story also shows up on the unctuous Collingwoodliving.com, whose main purpose online seems to be to produce oleaginous flattery of The Block and its leader, our deputy mayor. Consider it our local alt-fact website, our own Fox News: sycophants dedicated to supporting the Block even as it flails, fumbles and bumbles, and offends everyone else in its wake.*

In their story, our Deputy Mayor explains to his few remaining supporters that he’s clueless:

Deputy Mayor Brian Saunderson said he understood that the removal of the money happened in a budget meeting. “I don’t know what the rationale was during that discussion. The vote that took place at the council meeting was to specifically remove their representative, but I don’t know if at that time Councillor Burton gave the rationale for his motion.”

There it is again: Saunderson doesn’t understand that his actions and those of his minions have consequences. And did you see that Saunderson referred to DM Burton as “Councillor”? That’s very disrespectful of Brian, given that they both sit on county council and should know each other’s positions.

The story continues, “Deputy Mayor Saunderson asked CAO Fareed Amin to follow up on the matter with Clearview Township.”

Shouldn’t such a request of staff be voted on and approved by ALL of council? Yes, I know that Saunderson’s minions will vote in lockstep with his wishes, so it’s a moot point to raise the question of proper procedure. But why doesn’t he ask Burton himself? They both attend weekly county council meetings. Maybe Brian doesn’t know who he is. Or maybe Brian is reluctant to discuss anything openly, outside the comfortable shelter of secrecy he thrives within.

But no matter what Saunderson thinks of himself, he is not the spokesperson for the town: the mayor is. And the failure of this site’s authors (which includes at least one former mayor) to even ask our current mayor for a comment shows both how much it is an organ for pro-Block disinformation, and how little they respect both the mayor and protocol.

Of course, you can argue that Madigan was only doing what he does best: being Brian’s lapdog. He’s not on council to think things through, to weigh the pros and cons of his own votes, to make informed decisions, or to consider how others might react when this town treats them with disrespect. He’s there to bark for Brian. And, while he may fail at other council tasks, like providing open and transparency government, he does a damned good job of yipping on cue.

~~~~~
* For example, look at the story on the railway. Who is quoted? Brian Saunderson and Chris Carrier. Not our current mayor. Not the warden of Simcoe County. Look at the story on biking infrastructure. Who is quoted? Brian Saunderson. Not our mayor, not the director of our Parks, Recreation and Culture department. And then there’s the story about Collus in which Saunderson is quoted at extreme length (more than 500 words), while the mayor gets less than half that coverage. AND it quotes former mayor Chris Carrier (why? he hasn’t been involved in local issues for the past seven years). But no one from Collus or Alectra was interviewed. That’s not credible journalism: it’s oily propaganda. And maybe a platform for some former mayor(s) who want to run again in 2018.