Religious texts are full of admonitions about avoiding temptation. The Lord’s Prayer tells God to “lead us not into temptation.” Fat lot of good that does. We can find the way ourselves, thank you.

Not only do we lead ourselves there, we go willingly and eagerly. Pushing and shoving aside those who stand in our way to reach temptation. Ever see the crowds in the mall on Boxing Day?

Psychological texts, magazines and sites are full of secular advice on resisting temptation, too. It’s our brain’s “executive control” functions that  fail use when we succumb to our impulses. And fail they do, with disconcerting frequency.

Religious temptation, Wikipedia tells us, is the inclination to sin. Well, I can’t get into the whole notion of sin, relativism cultural and social bias, and situational ethics here. Maybe another post. For now, I’ll leave it to the theologians to wrestle that particular set of demons into the mud.

I’m talking about the average daily, run-of-the-mill temptation, the sort  that makes you pull out your wallet when you come across an unexpected sale on power tools, when you went to the store for a bag of potting soil. The sort that makes you go to the grocery store and come back with mangoes, exotic cheese, avocado and ice cream instead of just the milk you went to get. The sort that makes you go onto Amazon’s website just to look up something and end up ordering a half-dozen books and that first West Coast Pop Art Experimental Band CD you’ve always wanted in your collection (okay, okay, but I had the other two already so I had to complete the set).

…is the desire to perform an action that one may enjoy immediately or in the short term but will probably later regret for various reasons: legal, social, psychological (including feeling guilt), health-related, economic, etc… actions which indicate a lack of self control. 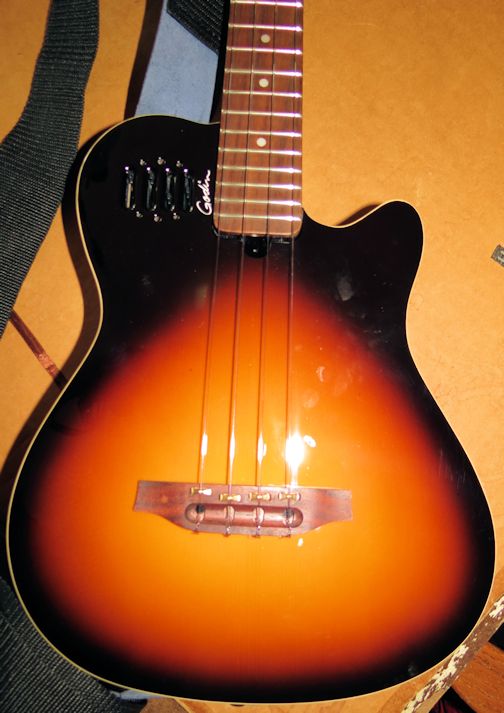 It’s tough, you know. We live in a rich, consumer-oriented society in which we are bombarded daily by thousands of ads all screaming “Buy me!” Promising a better, richer, more fulfilling life if we just give in and pull out our wallets. We are born and bred to be consumers.

We live in a world full of music stores replete with ukuleles just hanging there on the walls singing like sirens when you walk by. Hear that? That’s the voice of a solid-koa Koaloha sweetly calling my name… and that dulcet voice? That’s a Martin… Oooh, what’s that shiny one?

And then when we get the credit card bill, we start regretting it. But how to resist? Should we even try? Are we doomed to fail? But… is life to short to live without another ukulele?

In The Picture of Dorian Gray, Oscar Wilde has his character, Lord Henry, say,

The only way to get rid of a temptation is to yield to it. Resist it, and your soul grows sick with longing for the things it has forbidden to itself, with desire for what its monstrous laws have made monstrous and unlawful. It has been said that the great events of the world take place in the brain. It is in the brain, and the brain only, that the great sins of the world take place also.

And when you do, inevitably, yield, you are then beset with those nagging questions, the voice of your conscience nagging, scolding. What was I thinking? Why did I do it? Why did I buy it? What will she think?

She being the spouse, of course (at least in my case). The one who sits in judgement on the new toy, the new pet, car, TV set, ukulele, motorcycle, personal watercraft, riding lawn mower, that bag of specialty cheeses… did I mention ukulele? Did I mention it was shiny? 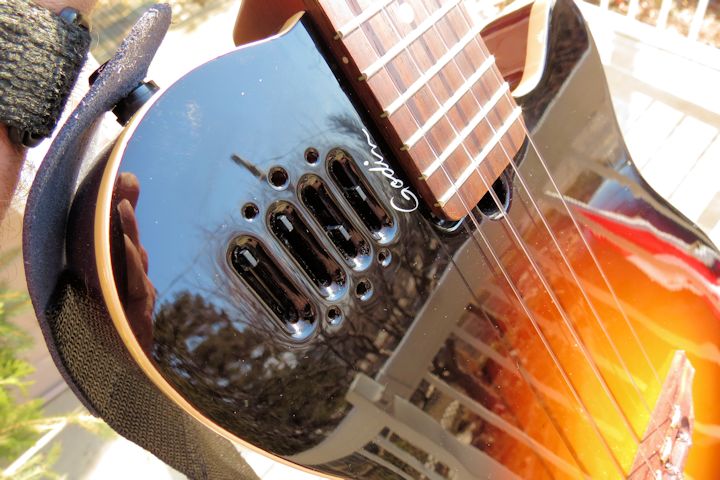 Sigh. Yes. Again, led into temptation by the little four-stringed monster. The Godin Multiuke this time.

Pick it up. Feel the weight. The balance. Run your hand along the neck and feel the smooth edges of the frets. Feel how comfortably it sits in your arms. Listen to how it responds when you strum it. Gently at first. Then coaxing the sound out with more passion and energy. Listen for the resonance inside the chambered body; the clear sustain of the notes. Surprisingly loud without a sound hole.

Temptations, when we meet them at first, are as the lion that roared upon Samson; but if we overcome them, the next time we see them we shall find a nest of honey within them.
John Bunyan; Pilgrim’s Progress (1678) 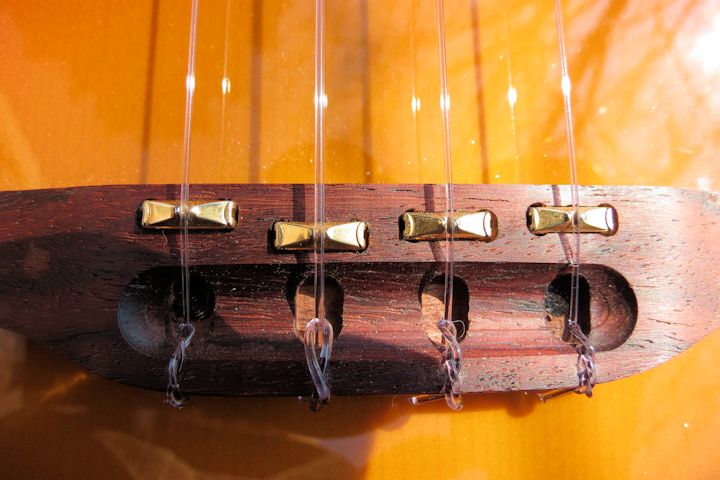 Go on, go on. Plug it in. It’s electric, after all. Custom voiced electronics. Built-in battery-powered preamp with three-band EQ. Each string sitting on its own saddle over a piezo pickup.

Can’t tell how it really sounds without plugging it in, can you? And by golly, the music store will be happy to provide an amp and a cord just for that purpose. Here, sit down on this stool and pluck away for a while. Smiles all around as you sit down.

Did I mention it comes with a really nice, padded gig bag? the store owner asks, innocently. I wonder if it’s obvious to him that I’m drooling. It is to Susan, who’s watching me like an owl watches a family of mice on the forest floor. I’ll be she’s counting up the other ukes at home, wondering where I’ll have the space for another. 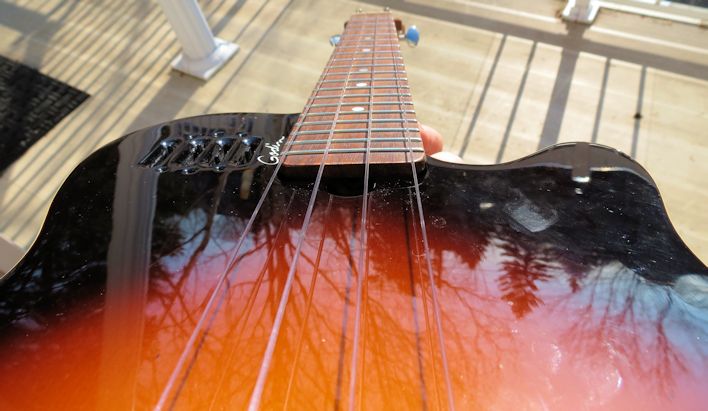 But it is lovely, isn’t it? I look at her expectantly, and my brain runs through a whole lot of calculations. How much money did I get from selling the Ergo bass? How much is left in my Paypal account? What would I get if I sold one of my other ukes? Two? What if I sell the reso guitar?

What’s the total when I add them all up? Is it close enough for me to be able to beg and plead successfully to borrow the remainder? I can feel my wallet shifting and twitching in my pocket, as if the credit card is trying to escape captivity.

Or am I still short of credit (literal and figurative)?

Can she see in my eyes the way it makes my heart beat just a little faster? Can she feel the music in me like I can? She certainly knows music is in me – although she also knows my passion for it far exceeds my talent. But I can’t live without music, without making it, even modestly.

Do you hear music in your head A lot? I do; all the time. I can’t walk the dogs without turning the beat of my footsteps into the rhythm of a song I hear.

Without music, life would be a mistake.
Friedrich Nietzsche, Twilight of the Idols 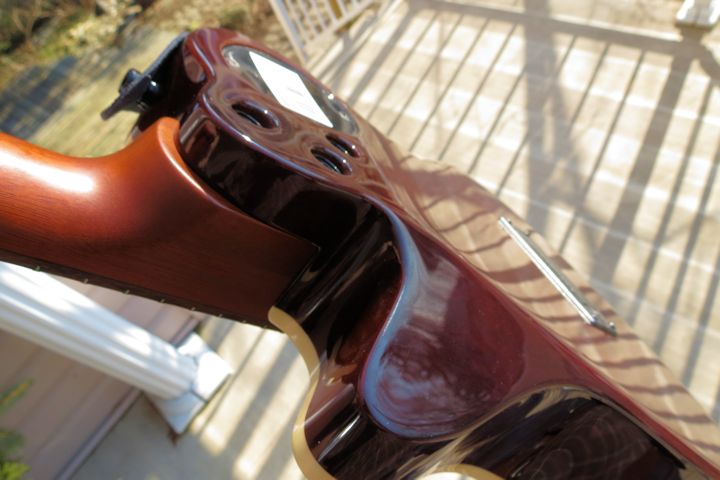 Temptation, temptation. I hem and haw, agonize and dither while Susan watches, saying nothing. We’ve been down this route before. Different store, different uke, same story.

The clock ticks. The store owner’s smile is slowly losing its perkiness, struggling to stay pasted on his face. Closing time has come and gone. Dinners await. Probably families, friends, pets. I’ve been there, know what it’s like waiting for the customer to leave so you can close the door, cash out, and turn off the lights at last. I give in, mutter my thanks.

I walk out without it. There’s a long silence on the drive home. We listen to the radio, but my thoughts are elsewhere. Calculating. Wondering if it’s what I really want. Wondering if my amp is good enough. What if I just sleep on it and see what clarity tomorrow brings?

Music is the brandy of the damned.
George Bernard Shaw: Man and Superman (Act III)

Or in my case, the tequila of the damned. Damned if I do, damned if I don’t. Just like in politics. I’m passionate about politics but music resides deeper within me.

In the end, a couple of days later, I called the store back and pout a deposit on it. What the hell: I’m so used to giving in to temptation of this sort, I’m not sure how to say no. But I’ll have to sell something, maybe a couple of instruments. Thin the herd a bit. Maybe drop it down from a dozen to six or seven ukes and a single guitar. Do I even need the Viola bass? Or play it much?

But what is a life without music? Without making music? Surely poorer, surely shorn of some cosmic connection. Life without music is a rocky, promontory stubbornly jutting above the tideline of those deeper swells, unmoved by their rhythms, deaf to the tones that wash around it.

The man that hath no music in himself,
Nor is not moved with concord of sweet sounds,
Is fit for treasons, stratagems and spoils.
William Shakespeare: The Merchant of Venice, V.1.